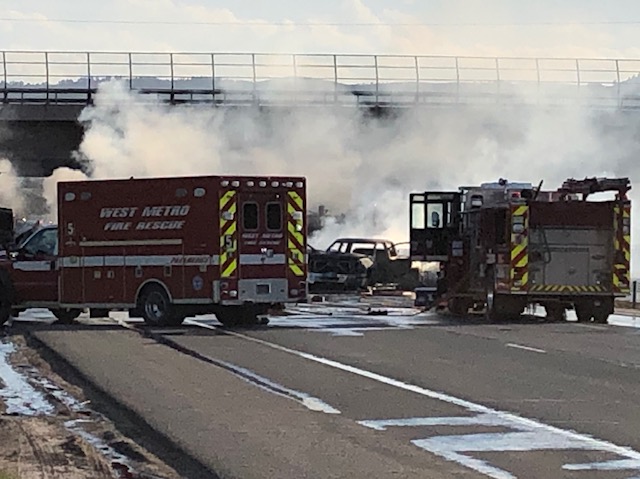 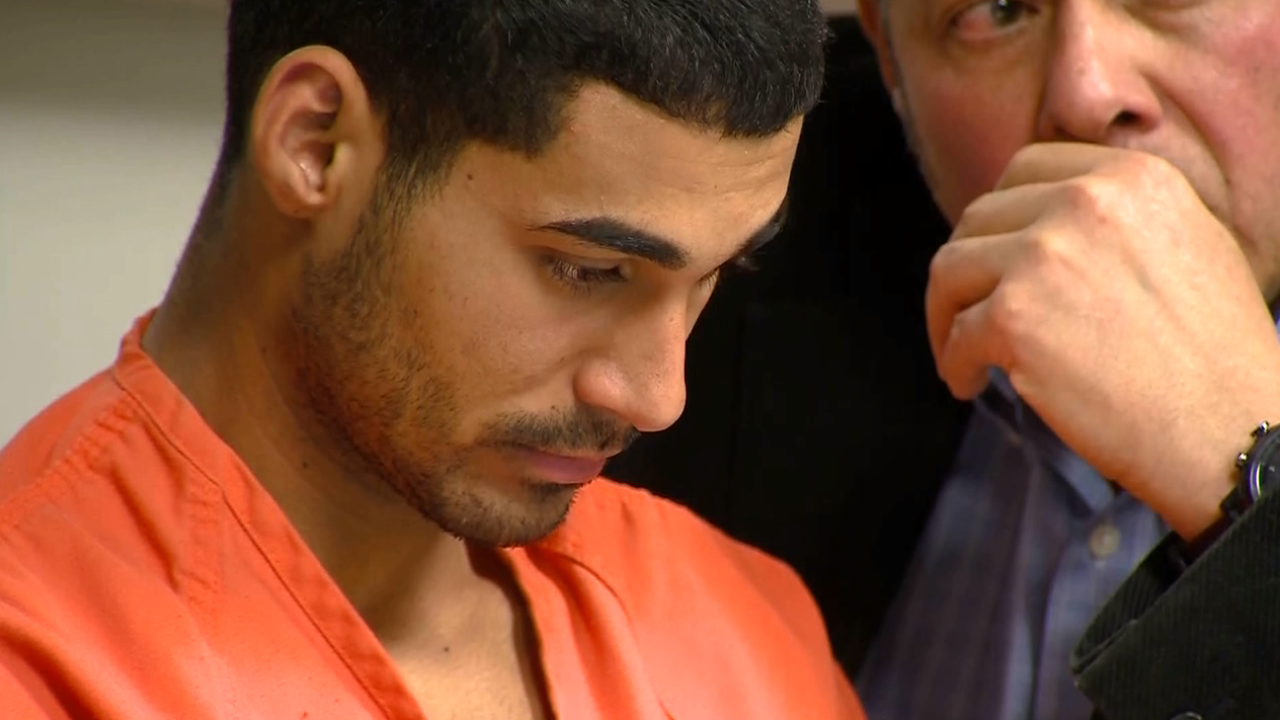 GOLDEN, Colo. – The driver of a semi going eastbound on I-70 near Colorado Mills Parkway hit speeds upward of 85 miles per hour before causing a deadly and fiery crash that left four people dead and many others injured Thursday afternoon, according to an arrest affidavit.

Rogel Lazaro Aguilera-Mederos, who was interviewed by police after he was released from the hospital, said he was driving the semi eastbound on I-70 when he lost control of the vehicle after his brakes failed. He said tried to maneuver to the right shoulder to avoid stopped traffic.

The affidavit states Aguilera-Mederos saw the right shoulder was blocked by another stopped semi, so he swerved backed into the lanes of stopped traffic and closed his eyes before the crash, thinking he was about to die.

The 23-year-old U.S. resident from Cuba survived and was able to escape the blaze that had already ignited. He was taken to St. Anthony’s Hospital in Lakewood for non-serious injuries.

The suspect's attorney told Denver7 that he hasn't seen the videotaped interviews that his client "voluntarily" gave to police.

"He sat down with them for an hour and a half," Robert Corry said. "No lawyer, not expecting any leniency from that. He answered all their questions."

One of the big questions remains: What happened to the brakes?

"I don't want to speculate, other than to say one thing, which is, we believe there was some sort of malfunction," Corry said. "We've seen video of fluid coming out of a truck. We're not sure if it's this truck, but it may be, and if that's the case, fluid squirting out of it, maybe that's brake fluid, again, all that I just said is speculation and I'm not minimizing the injury and sorrow and pain to the people who were injured or killed in this terrible accident, but I think there are many sides to this story that will be told in the coming days."

Truck experts say it's unlikely to be brake fluid, since big rigs operate with "air" brakes.

The affidavit details accounts from witnesses who said they saw the semi speeding past them near the buffalo herd overlook at the Lookout Mountain exit.

Jonathan Valdez and Pedro Olvera, who were in a work truck heading east on I-70, told police they followed the semi and recorded its movements with a cell phone camera “because of how the semi was driving” near the Genesee exit. They also told police they noticed a trail of fluid coming from the rear of the semi.

According to the affidavit, the men saw the semi driving in all three lanes, and, at one point, the semi forced a pickup truck off the left side of the highway. Video obtained by police shows the semi pass an emergency runaway truck ramp.

Olvera told police his work truck can only go up to 80 mph and that he was not able to keep up with the accelerating semi. Both men eventually caught up to the semi and saw it had been in the fiery collision.

The probable cause statement also states video from the witnesses was reviewed by police, which shows the semi driving in the far-right lane of the highway “under a clearly marked yellow caution sign” which reads “RUNAWAY TRUCK RAMP 2000 FEET” with an arrow pointing toward the far right lane. It also states there was a speed limit sign with a clearly marked speed limit of 65 mph for personal vehicles and a 45 mph speed limit for commercial vehicles.

Video obtained by police shows the semi continuing eastbound, drifting from the far-right lane (lane 3) to the line left of it (lane 2) twice. The video then shows the semi driving past the runaway ramp that is “clearly marked with a yellow sign saying “RUNAWAY TRUCK RAMP.””

In the arrest affidavit, police stated the semi had a "free and unobstructed" path to the runaway ramp on the right side, “but instead swerves left from lane #3 to lane #1, … then forces a pickup truck that is in lane #1 off the left side of the highway.” Police state that truck drove off the roadway in to the dirt road on the side of the road to avoid getting hit by the semi.

In the video, the affidavit states, the semi is seen continuing eastbound and driving under another yellow cautionary sign that read “TRUCKERS YOU ARE NOT DOWN YET. ANOTHER 1 ½ MILES OF STEEP GRADE AND SHARP CURVES TO GO.” At this point, police said, the video ends.

Arresting documents show Lakewood police then spoke with another witness who saw what happened moments before the deadly crash.

Brett Dickerson was reportedly driving east on I-70 when he saw the semi speeding so fast he decided to take a cell phone video. The battery on his phone was dead, so Dickerson pulled along the side of the road to “gesture to the driver,” the affidavit states.

The affidavit states the witness realized something was wrong when he saw that the driver of the semi was “wide-eyed” and had a terrified look on his face. He told police he noticed his own vehicle was traveling at 84 mph and the semi continued to “pull away at a higher speed.”

The witness told police he watched the semi drive from across the left lane onto the right shoulder and pass stopped vehicles. A short time later, he came across the same semi at the collision point.

Investigators also spoke to a fourth witness who was driving a UPS semi-truck that was stopped in traffic on I-70 just west of Denver Parkway in lane #2.

Kevin Kirkpatrick told police he saw the semi drive past him on the right side of the highway at an estimated speed of 100 mph just before the collision with the other vehicles occurred, according to the affidavit.

The probable cause statement states police then went to St. Anthony’s Hospital to speak to several victims of the crash.

One of the victims was going east on I-70 in stop and go traffic when she was hit. The victim told police she heard a loud noise and was propelled forward with a Jeep being pushed on top of her car.

A man, who was not identified, helped the woman out of her vehicle and both the man and the victim ran away from the flames. The victim was treated at the hospital for a severe laceration to her forehead.

Another victim told police he was driving a loaded 18-wheeler on eastbound I-70 at Denver West Parkway when he checked his brakes and found them hot. He told police that as he waited for his brakes to cool, he heard the crash and saw a fireball in his rearview mirrors. The victim told police the back of his truck was hit and the fireball surrounded him, propelling him forward inside his cab. He was treated for contusions to his right knee.

The affidavit then states investigators found at least four “unidentifiable and unrecognizable” people trapped inside their cars in the aftermath of the crash.

Aguilera-Mederos was taken from the hospital to the Lakewood Police Department where he agreed to speak to investigators about the deadly crash. During the interview, Aguilera-Mederos claimed he was only driving at 25 mph in the same area that the video showed him driving out of control while passing the runaway truck signs and ramp and running a vehicle off the highway, the affidavit states.

The driver then claimed that he was only going 45 mph as he approached 6th Avenue, and that he tried to brake but noticed his brakes were not working. Additionally, he told police the downhill grade caused the semi to accelerate and that he tried to activate the emergency brakes “without success,” according to the affidavit.

He then told police he did not want to roll the semi so he would not drive off the road, adding he moved to the right shoulder to avoid stopped traffic in all three lanes as his semi reached a speed of 85 miles per hour on the speedometer.

The affidavit states Aguilera-Mederos realized he was about to rear end another semi that was already stopped on the right shoulder and he chose to drive back into the lanes of stopped traffic.

He told police he thought he was going to die as he closed his eyes before hitting nearly a dozen stopped vehicles. The document then states Aguilera-Mederos crawled from the truck as the fire started and spread to other vehicles.

Corry told Denver7 he believes that his client is suffering survivor's guilt.

"He is in deep sorrow. He can't sleep. He can't eat... This is by far the worst thing that has ever happened to him," the attorney said.

Aguilera-Mederos appeared in court for his first advisement Saturday afternoon.

MORE: 'It's hard to believe': Family describes call with semi driver after fiery I-70 crash

Knowles had asked for a $500,000 bond considering the extent of the damage left on the highway, his lack of ties to Colorado and because of his status as a green card holder.

Aguilera-Mederos is due back in court on May 3. Formal charges are expected to be filed that day.

The 23-year-old has not been formally charged but is being held on investigation of four counts of reckless vehicular homicide.