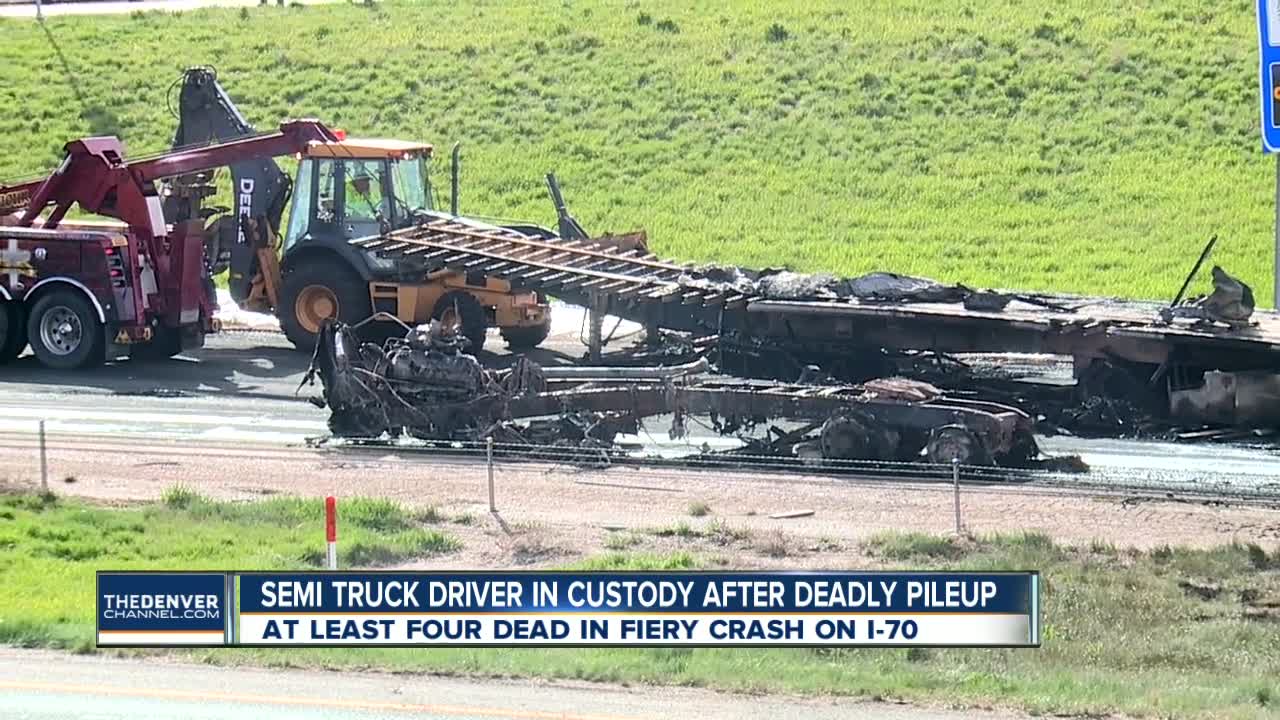 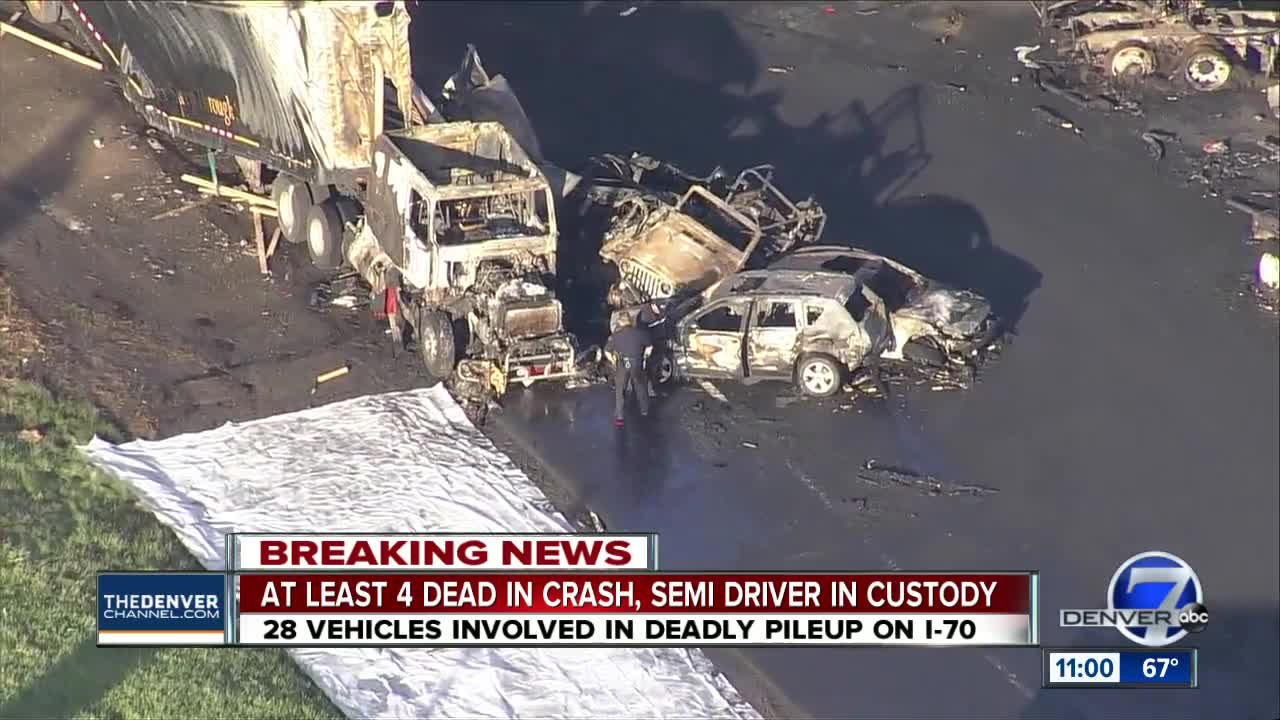 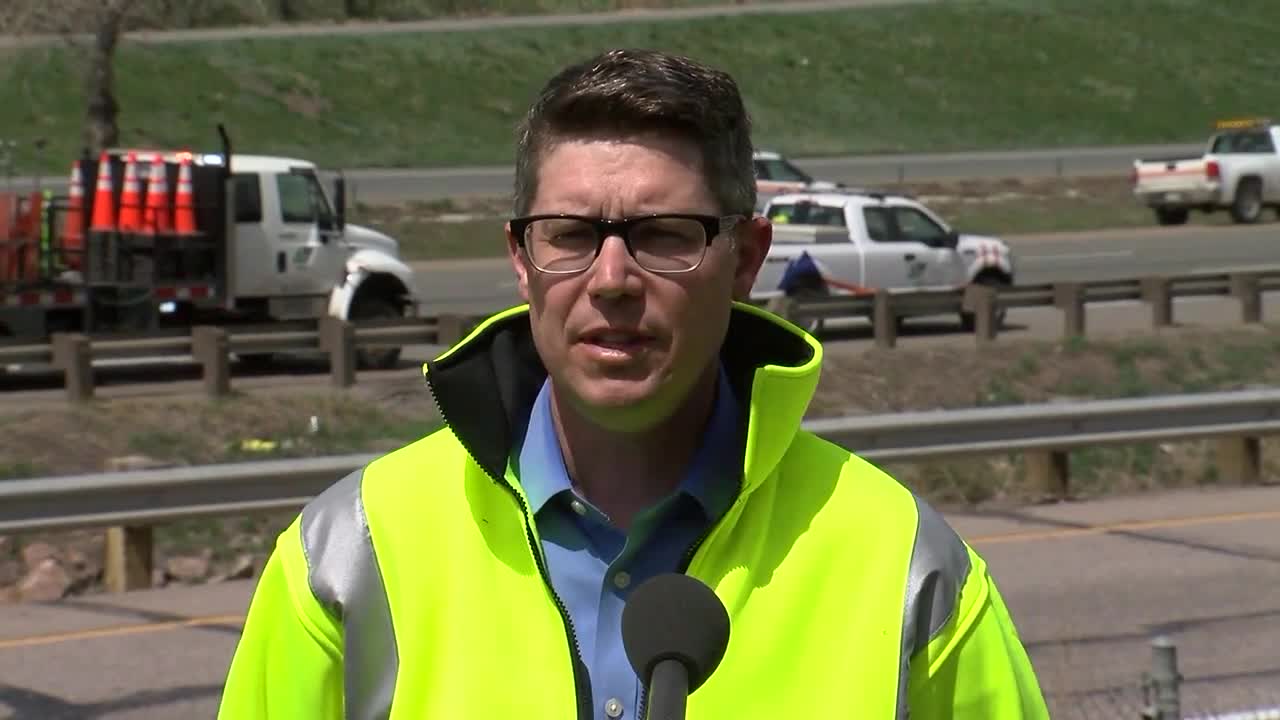 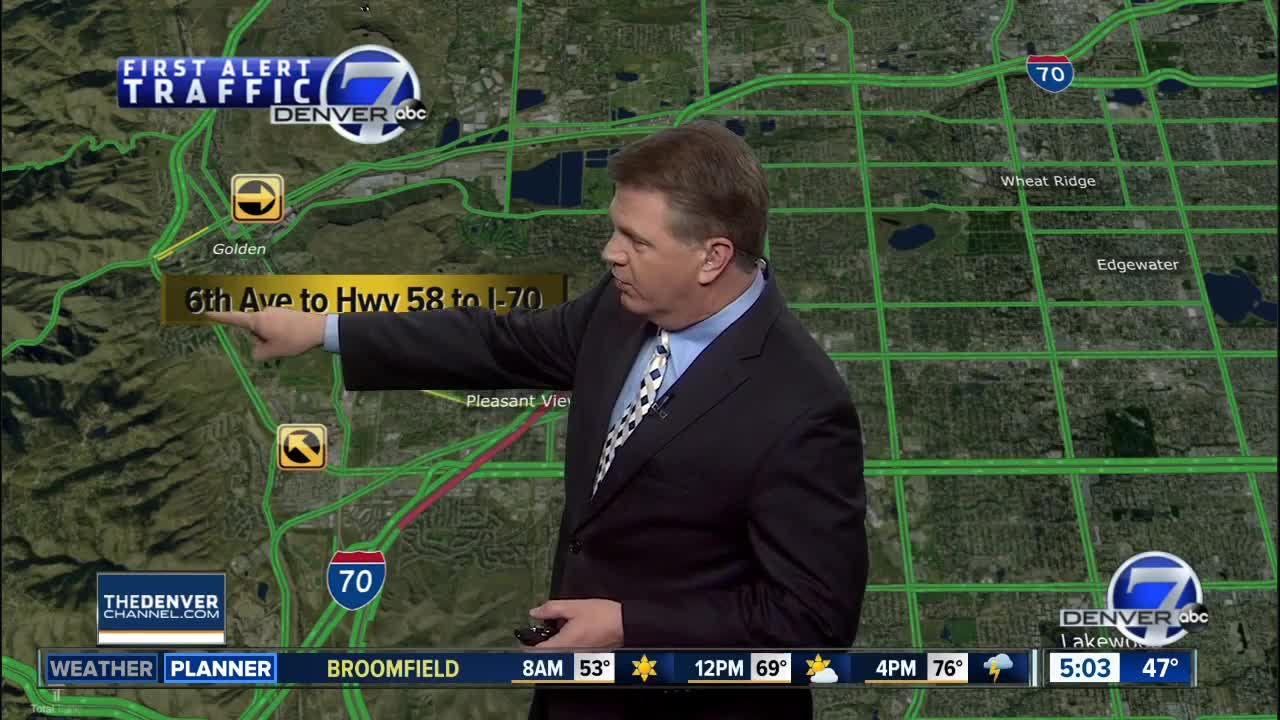 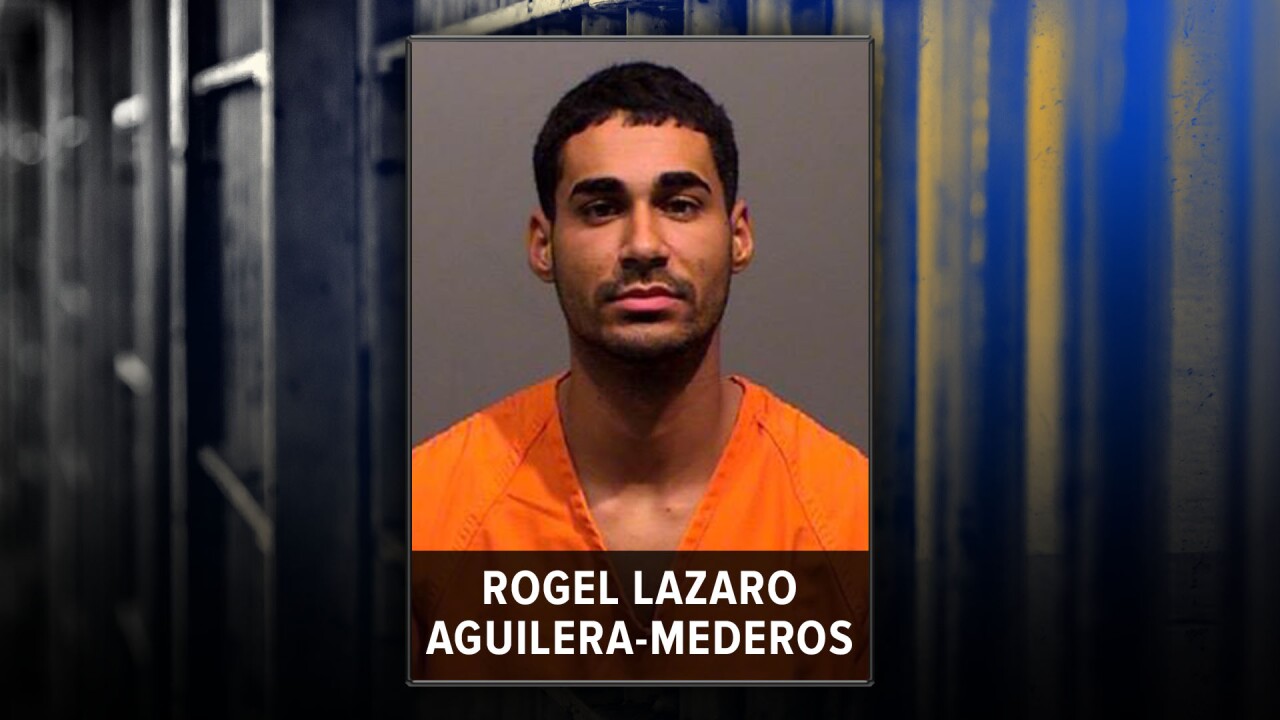 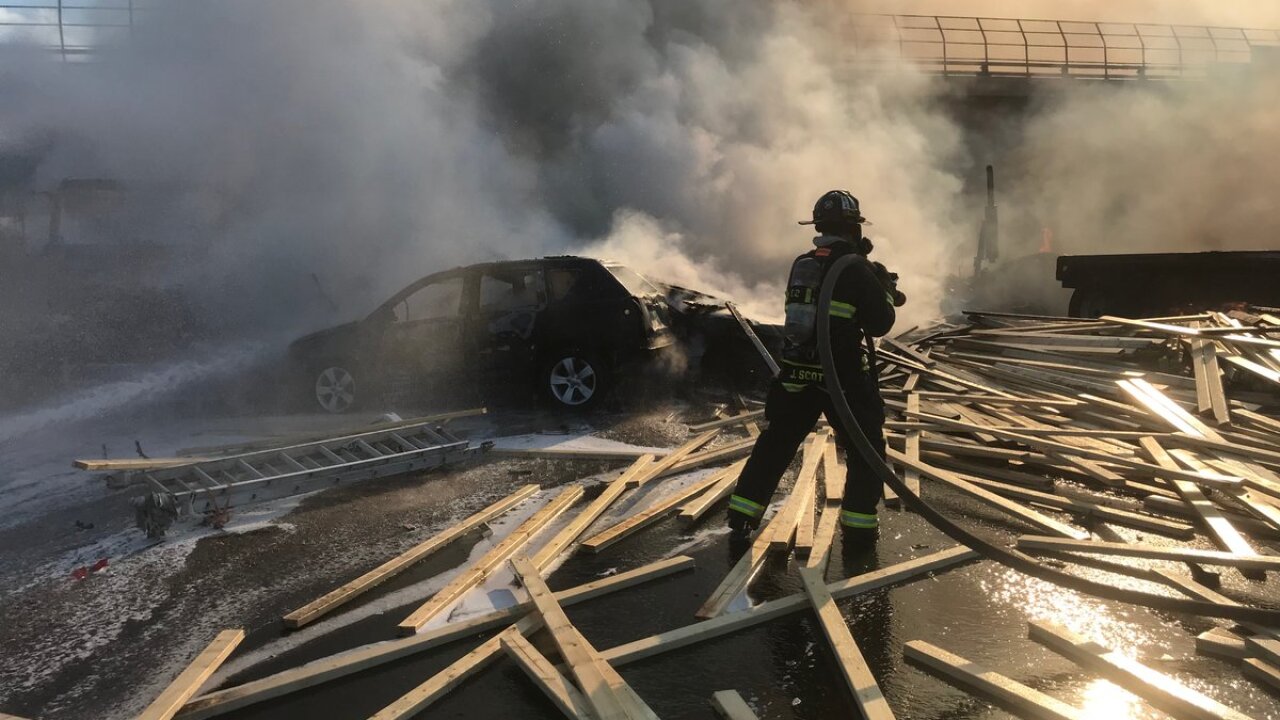 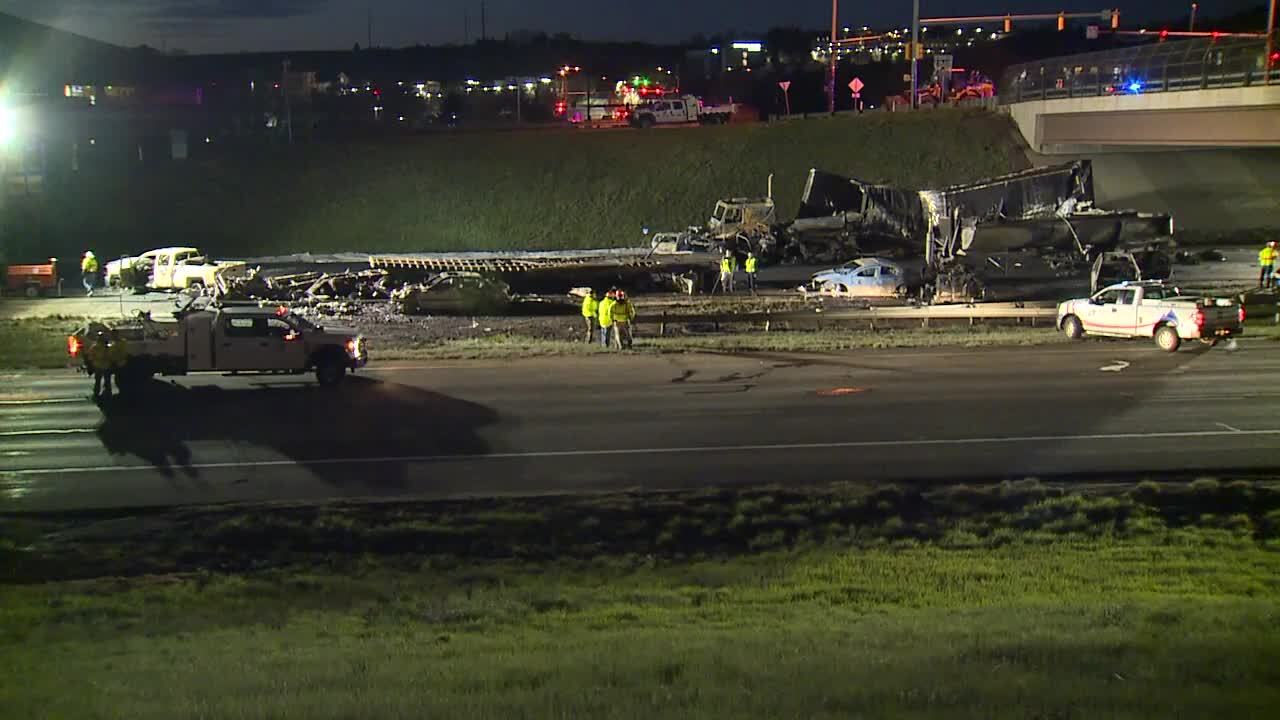 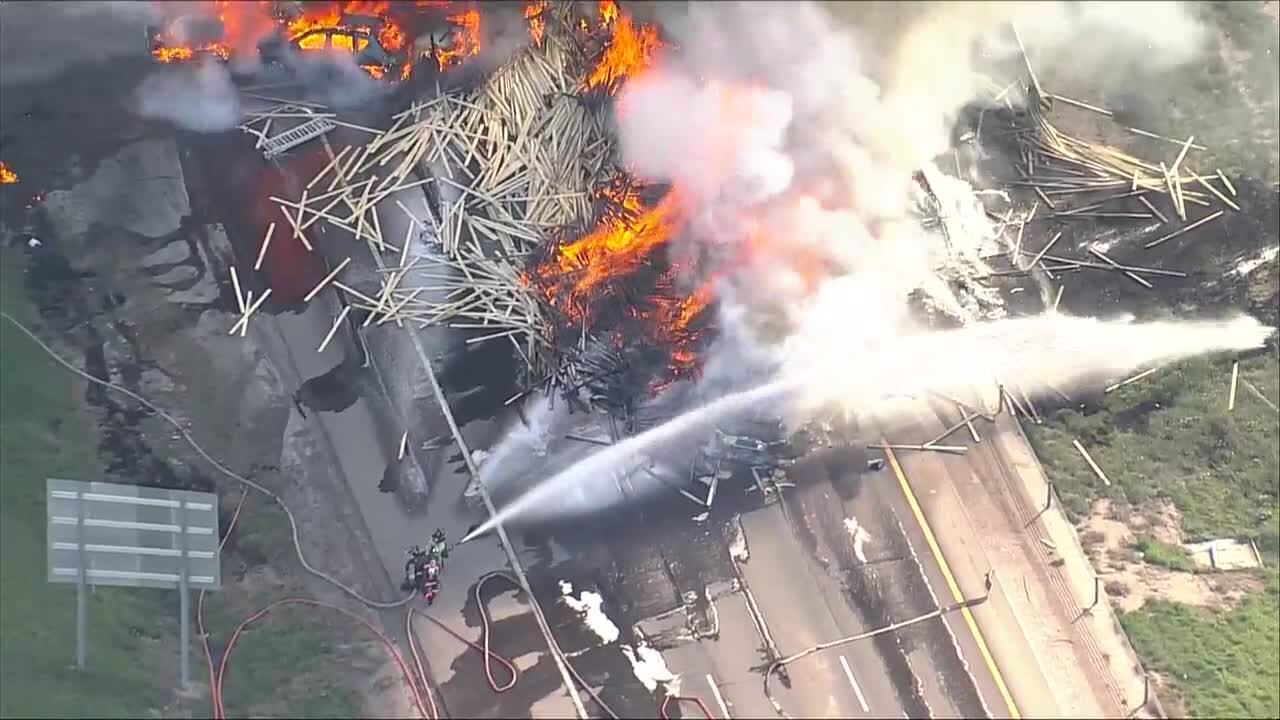 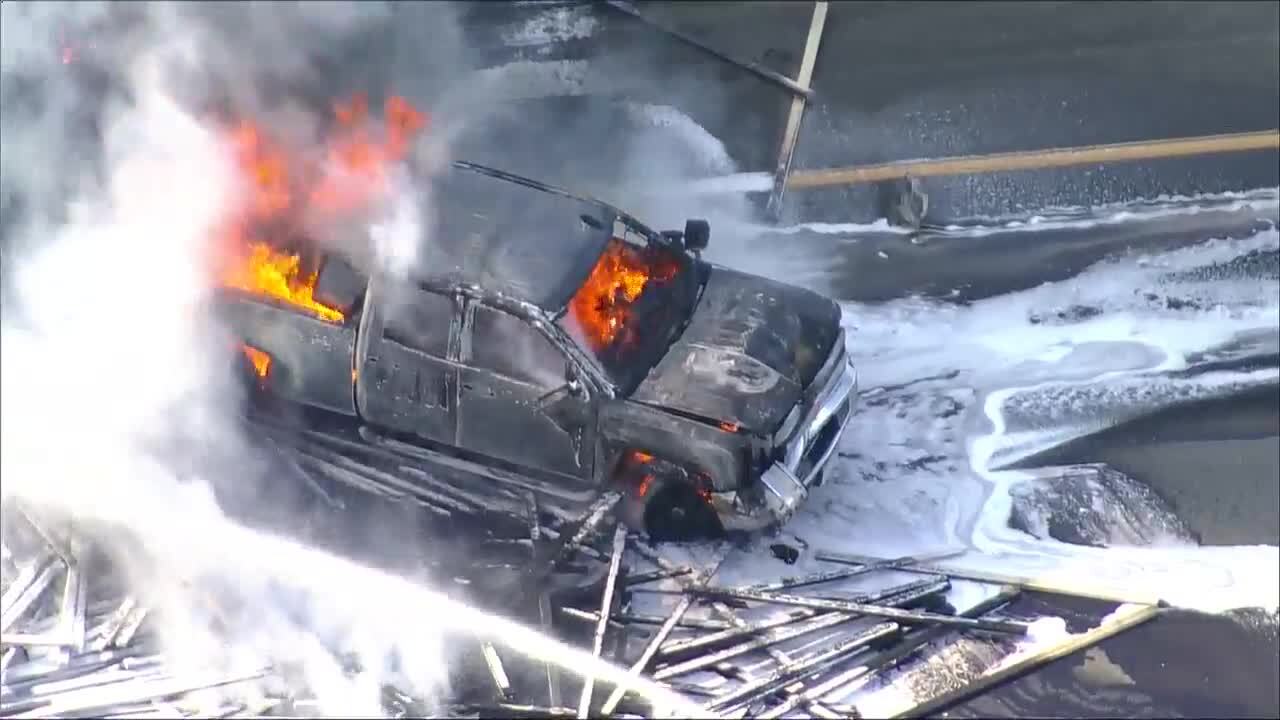 LAKEWOOD, Colo. — The driver of a semi that caused a deadly, fiery 28-vehicle crash on I-70 Thursday afternoon will face four counts of vehicular homicide charges, authorities said Friday morning.

The driver has been identified as 23-year-old Rogel Lazaro Aguilera-Mederos of Houston, Texas.

Ty Countryman with the Lakewood Police Department said 24 cars and four semis were involved in the crash, which killed four people.

"That number (of involved vehicles) is significantly higher than what we had last night," he said. "A lot of that is because once the debris of the semis and cars under semis — once we could get in and really start doing a car count, that's why that number really went up."

Four people died in the crash, he said. They were all traveling in separate cars.

Gianna Lisac at St. Anthony's Hospital confirmed Friday afternoon the hospital saw 10 patients from the crash. Nine of the 10 had been treated and released as of 12:40 p.m., though one man was still hospitalized in good condition. Lisac said seven patients were transported by ambulance.

Countryman said the No. 1 focus for the Lakewood Police Department is to investigate the crash and bring justice to the families of the crash victims.

CDOT encouraged drivers to avoid the area if possible and expect long delays.

By 1 p.m., the interstate had been cleared of the semi trucks. The westbound lanes reopened just before 2 p.m. Drivers should still expect long delays in the area, CDOT and CSP said.

CDOT Chief Engineer Joshua Laipply said he anticipated the eastbound lanes will reopen sometime Saturday morning and that crews would be working to do whatever they could to accelerate their timeline.

Engineers inspected the bridge over I-70 for fire and heat damage and deemed the bridge to be in good shape. Laipply said crews were inspecting up to 4 inches of asphalt and concrete on I-70 and will likely be removing it and repaving the interstate.

Driver was eastbound on I-70 from mountains, has CDL in Texas

An out-of-control semi carrying lumber caused the crash, which occurred around 4:50 p.m. in the eastbound lanes of I-70 near Colorado Mills Parkway, Countryman said. Because of the large fire and explosions at the site, investigators couldn’t start looking at the devastation until about 10 p.m., when West Metro Fire Rescue was able to extinguish the last of the flames.

The driver of that semi, Aguilera-Mederos, was taken into custody on four counts of vehicular homicide. These charges stem from interviews and evidence gathered overnight, Countryman said.

Aguilera-Mederos has a commercial driver's license, Countryman confirmed. Lakewood police confirmed Friday afternoon that he was in the U.S. legally on a green card.

According to the Texas Department of Public Safety, one must either be a U.S. citizen or have proof of lawful presence in the U.S. in order to apply for a commercial learner permit in the state, which is a prerequisite for obtaining a commercial driver’s license in Texas. Commercial drivers must also be able to present proof of Texas residency and a Social Security Number.

Aguilera-Mederos was injured in the crash, but not seriously, Countryman said. There was no evidence of drugs or alcohol in his system. He was arrested and taken to the Jefferson County Jail after being discharged from the hospital.

As of 10 a.m., he had not been formally charged — he is being held for investigation of vehicular homicide.

His advisement is scheduled for Saturday at 1 p.m. He could face more charges.

Authorities are building evidence from the scene, Countryman said. Investigators are looking into if the semi’s brakes were not working. Lakewood police set up a tip line for witnesses of the crash to call if they had information. That number is 303-763-6800.

At 7 a.m., Countryman said there were still bodies at the crash site and daylight would help with that recovery process.

A fire of this magnitude, with temperatures up to 2,500 degrees Fahrenheit, can seriously damage the roadway, Laipply said.

READ MORE: How to get around the I-70, Colorado Mills Parkway closure for the Friday morning commute

He said CDOT is asking people who see major crashes to not stop their vehicle to take pictures and video. A West Metro Fire representative said firefighters were blocked from getting to the scene by people who stopped their cars to look at the scene. One firetruck was slightly damaged because it had to go off the road to get around the stopped vehicles.

"I think that we lose sight that vehicles are deadly weapons and all of us get a little careless at times and need to be more careful when we're driving," Laipply said.