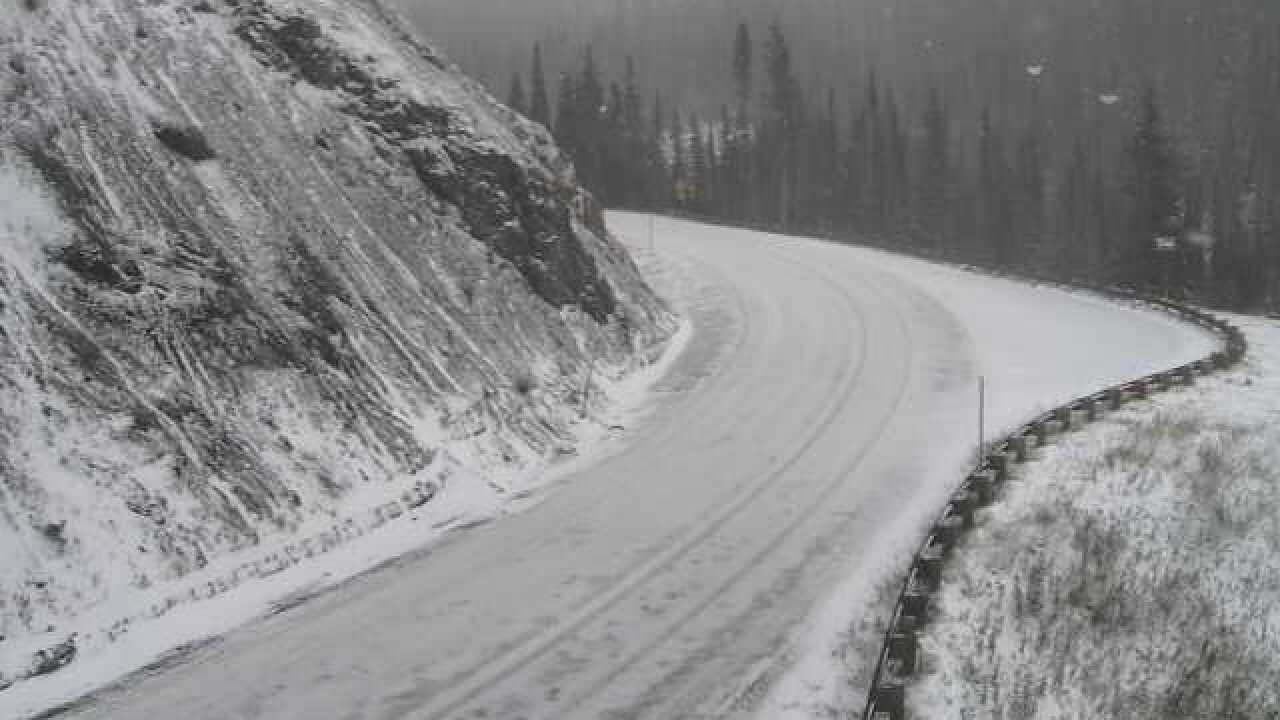 Copyright 2020 Scripps Media, Inc. All rights reserved. This material may not be published, broadcast, rewritten, or redistributed.
CDOT
Snow falls on Cameron Pass near the Cameron Peak Fire on the morning on Tuesday, Sept. 8, 2020. 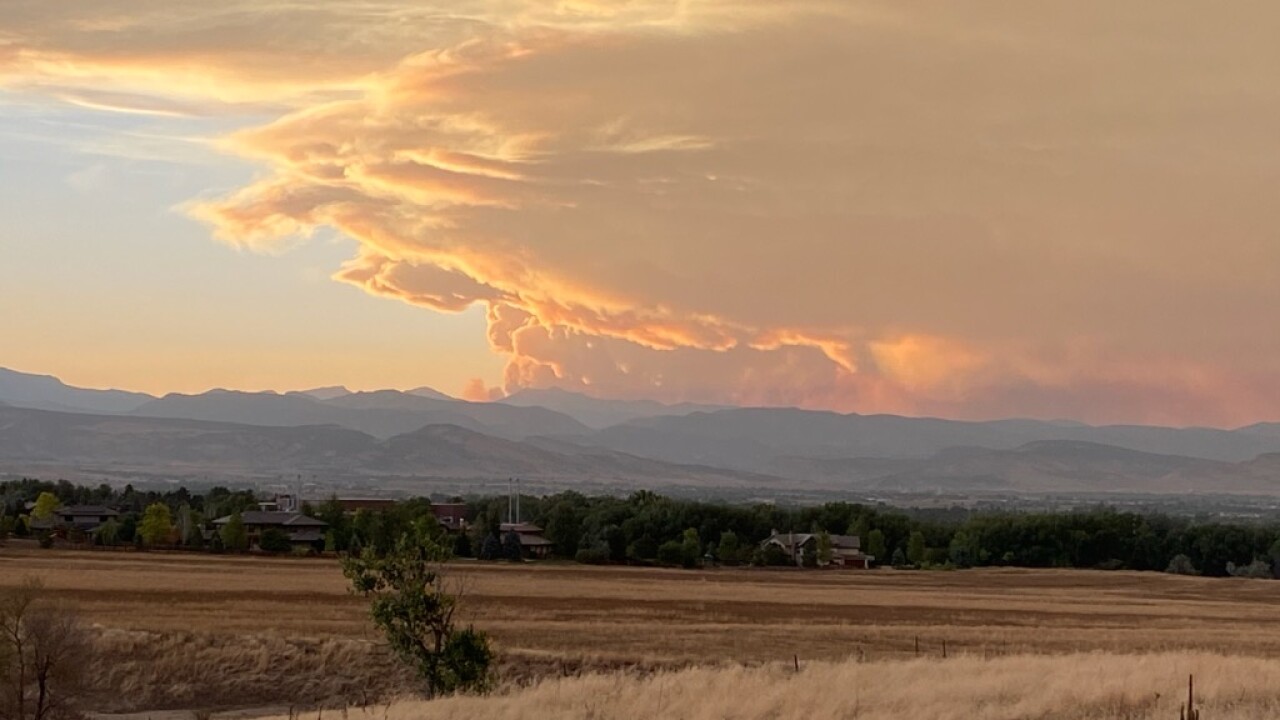 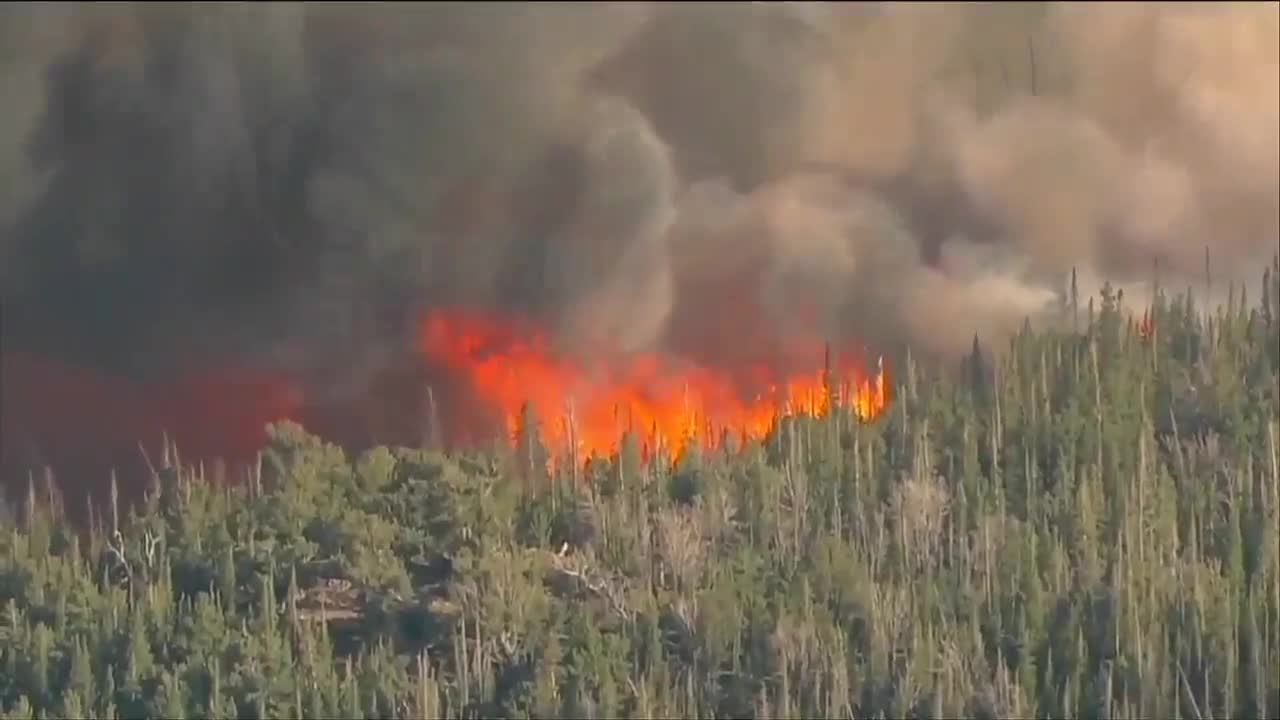 LARIMER COUNTY, Colo. – The Cameron Peak Fire received an inch of snow overnight and is expected to see less activity Tuesday after it grew more than 40,000 acres on Monday ahead of the cold front.

The fire, which is burning in Larimer County, was 102,596 acres in size and 4% contained as of Tuesday morning as snow fell across the fire and temperatures were in the upper 20s and lower 30s across much of the area.

The fire exploded Monday amid continued dry, hot and windy conditions. The sky in Fort Collins and surrounding cities turned dark orange Monday as the fire grew quickly and dropped ash as far as Denver – more than 70 miles southeast of the fire.

The fire grew from around 59,000 acres as of Monday morning to more than 96,000 acres just as the cold front hit Monday night.

Cameron Peak Fire officials said Monday night some structures in Monument Gulch had been damaged or destroyed in the fire on Monday, but the extent of the damage is unclear until a survey can be completed. They said that the cold weather and precipitation would be beneficial to cooling the fire and increasing moisture in the fuels that have yet to burn.

Larimer County Sheriff Justin Smith said Tuesday morning in a Facebook post that crews were working to see if they could get damage assessment teams into areas where properties might have been damaged in the fire on Tuesday.

Smith said that crews were not able to check out Monument Gulch Monday night because of conditions. Smith said he did not expect to have information on the area on Tuesday but might have updates on other areas.

“We hope to get assessments from the Poudre Canyon, from Rustic west, quicker than Monument Gulch,” Smith wrote. “I do want to be careful that we don’t get ahead of ourselves in the Poudre Canyon and release inaccurate information.”

There is a winter storm warning in effect for nearly the entire Cameron Peak Fire area into Wednesday, with up to a foot or more of snow forecast.

On the south side of the fire, crews met Monday with officials in Estes Park to plan ahead in the event the fire continues to move south. Fire managers said they plan to use the snow day Tuesday to continue planning operations for the days and weeks ahead.

Paul Bruggink, a spokesperson for the Cameron Peak Fire, said in an interview Tuesday that the snow would help firefighters “tremendously” as humidity levels rise and the fuels on the ground soak up the moisture.

He said that crews on the ground had reported accumulating snow on the forest floor, which won’t be enough to put the fire out, as the snow will melt and there will be dry and hot fuels underneat but will be beneficial.

Bruggink compared the situation to a campfire one is trying to put out – you can pour water on it and stir it around, but it will not douse the flames entirely.

He said some concern accompanied the snowfall for rock and mudslides in the event there is heavy runoff or rain in coming days.

The wind chill will also be a concern for firefighters Tuesday and Wednesday, with temperatures forecast in the 20s and 30s.

“This will give us a couple days of reprieve,” Bruggink said. “It is not what we call a season-ending event, by any means.”

Rist Canyon Volunteer Firefighter Norm Miller called the snow his special present, seeing as how Tuesday was his birthday.

“The firemen are getting a little break today, No one can quite grasp fighting a forest fire in a snow storm,” he said. “We are pretty happy to have this, and Lord knows we need this. It has been pretty dry.”

Miller, who has been on the force with Rist Canyon for 16 years, said that the weather Tuesday and Wednesday would hopefully slow the fire to where it was manageable.

“Even if it doesn’t do what we hope it does, it is still a relief. People can relax a little bit,” he said.

The fire grew to the fourth-largest in Colorado history – surpassing the High Park Fire that damaged hundreds of homes and killed one person in 2012 just east of where the Cameron Peak Fire is currently burning.

The engines that were ordered arrived throughout the day Monday and worked on structure protection in the areas of Pingree Park, Buckhorn, Stove Prairie Road and Highway 14.

But as the fire intensified in the afternoon and move toward Kinikinik and through the Roaring Creek drainage, further evacuations were ordered and some crews were moved.

Fire managers said firefighters would be looking for hot spots and working on new control lines in anticipation of temperatures rising later this week and the air drying out once again. Structurer assessments will continue.

There were 840 personnel working on the fire as of Tuesday morning.

Those areas will remain on voluntary evacuation notices until further notice.

Additionally, all evacuation orders have been lifted for the following areas, and residents may return home if they can show proper identification:

Click here to open the evacuation map on a new page.

Multiple roads are closed in the area of the fire, including all National Forest System lands west of the National Forest boundary, east of the Colorado State Forest State Park, south of County Road 80 C, and north of Rocky Mountain Park and Highway 34.

These closures are impacting recreation sites, including campgrounds, trails, trailheads, and Forest Service Roads, as well as boating and fishing sites and picnic sites.

Rocky Mountain National Park implemented temporary closures Sunday in a remote northern area of the park due to the fire. The closure includes trails and wilderness campsites.

In addition, Trail Ridge Road closed at 3 p.m. Sunday due to the potential of heavy smoke on the road. Old Fall River Road closed late Saturday night. Officials say they do not know when either road will reopen.

A Fire Management Assistance Grant from FEMA was approved for the fire, meaning more funds will be directed to support firefighting efforts.

(Note: The 2013 West Fork Complex is not included on this list because it was a series of different fires close to one another.)