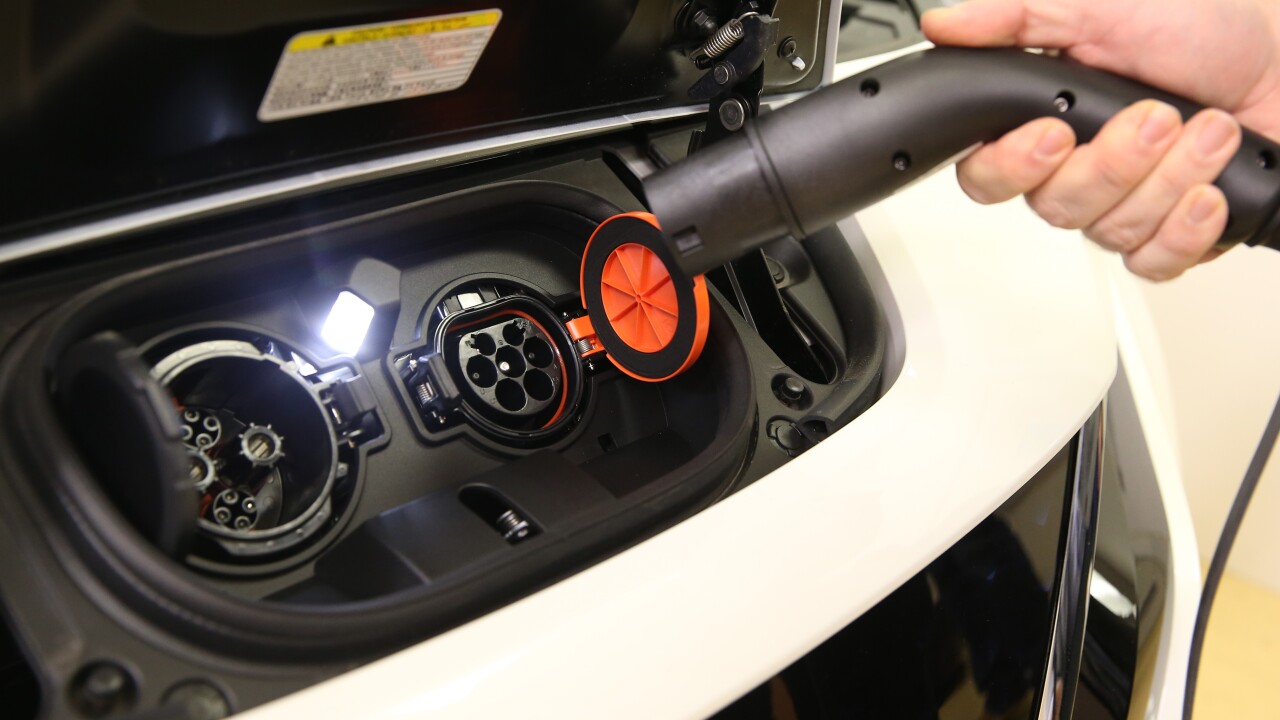 Copyright 2019 by Getty Images
Michael Dodge/Getty Images
MELBOURNE, AUSTRALIA - JULY 11: A charging device for the the new Nissan Leaf vehicle is seen on July 11, 2019 in Melbourne, Australia. The Nissan LEAF was launched in Australia on Wednesday, with Nissan's local manufacturing plant makes exclusive parts for the electric vehicle. The Nissan casting plant in Dandenong has been in operation for over 35 years, employing almost 300 people. Sales of hybrid vehicles and electric vehicles in Australia have doubled in the first six months of 2019, compared to the first six months of 2018, despite total new car sales fallng by 8.4 per cent. (Photo by Michael Dodge/Getty Images)

DENVER – The Colorado Air Quality Control Commission on Friday voted 8-1 to adopt a new standard for zero-emission vehicles in the state as Colorado pushes to try to improvepoor ozone pollution conditions across the state.

Colorado becomes the 10th state to adopt a ZEV standard. After a week of meetings, the standard that was adopted Friday will require automakers to make 5% of its sellable inventory zero-emission vehicles by 2023 and require 6% of the inventory to be ZEVs by 2025.

Automakers would also get credit for offering more ZEVs as part of their inventory before 2023.

And though dealers would be required to offer a certain number of ZEVs, consumers would not be required to buy them. But experts told the state that the requirement will lead to manufacturers selling more different types of ZEVs in Colorado – including SUVs, crossovers and pickup trucks that are more highly-sought in Colorado than in some other places.

In January, Gov. Jared Polis signed an executive order ordering the Colorado Department of Public Health and Environment directing it to find a way to increase the number of electric vehicles in Colorado and said the state would also be investing in ZEV infrastructure with funds from the state’s settlement with Volkswagen over its cheating emissions tests.

In May, he outlined his roadmap to 100% renewable energy, part of which included a plan to increase the number of ZEVs on Colorado roads to 940,000 by 2030 and incentivize both consumers and automakers to buy and sell the vehicles.

The plans, and adoption of the new standards, are all aimed at reducing greenhouse gas emissions across the state in an effort to battle poor air quality across the Front Range and fight climate change.

At meetings this week, the Colorado Department of Public Health and Environment, the Air Quality Control Commission and other stakeholders, including auto dealers and manufacturers, hashed out the details of the new standard.

The Colorado Auto Dealers Association argued earlier this week that having a ZEV mandate would make cars more expensive overall because dealers would have to raise the price of other vehicles if they are unable to sell the electric vehicles.

“The zero-emission standard does not compel anyone to buy an electric vehicle. It only requires manufacturers to increase ZEV sales from 2.6 percent to 6.23 percent,” said Garry Kaufman, the director of CDPHE’s Air Pollution Control Division. “It’s a modest proposal in the face of a critical threat. Where the federal government refuses to act — states must lead. Time is of the essence.”

A recent survey by Consumer Reports found a growing number of Coloradans are in the market for electric vehicles, though currently they make up fewer than 2% of vehicles on the road in the state.

“With transportation on track to become the number one source of emissions in Colorado, we must reduce congestion on the road and pollution in the air,” CDOT Executive Director Shoshana Lew said in a statement. “We are grateful to the automakers for working with us to reach agreement on a negotiated Zero Emissions Vehicle rule – the first of its kind in any state.”

The automakers said Friday that they were pleased with the collaboration.

“We are appreciative of the Polis administration for working with automakers to develop a plan that will help the auto industry transition into the ZEV program,” said David Schwietert, the interim president and CEO of the Alliance of Automobile manufacturers.

“This collaboration between automakers and state officials represents a forward-thinking process that addresses the challenges of increasing electrification with smart and innovative regulatory policy,” said Global Automakers’ president and CEO John Bozzella.

Polis, in a statement Friday, said the adoption of the new standards represented a positive first step toward the overall goal of making Colorado a 100% renewable state.

“In one of my first executive orders as governor, I asked for the Department of Public Health and Environment to increase the choices Coloradans have when it comes to purchasing electric cars by increasing the number of models available in our state, and we got it done within a few short months,” he said. “It’s only the beginning. Colorado must continue to reduce smog and increase consumer choice.”