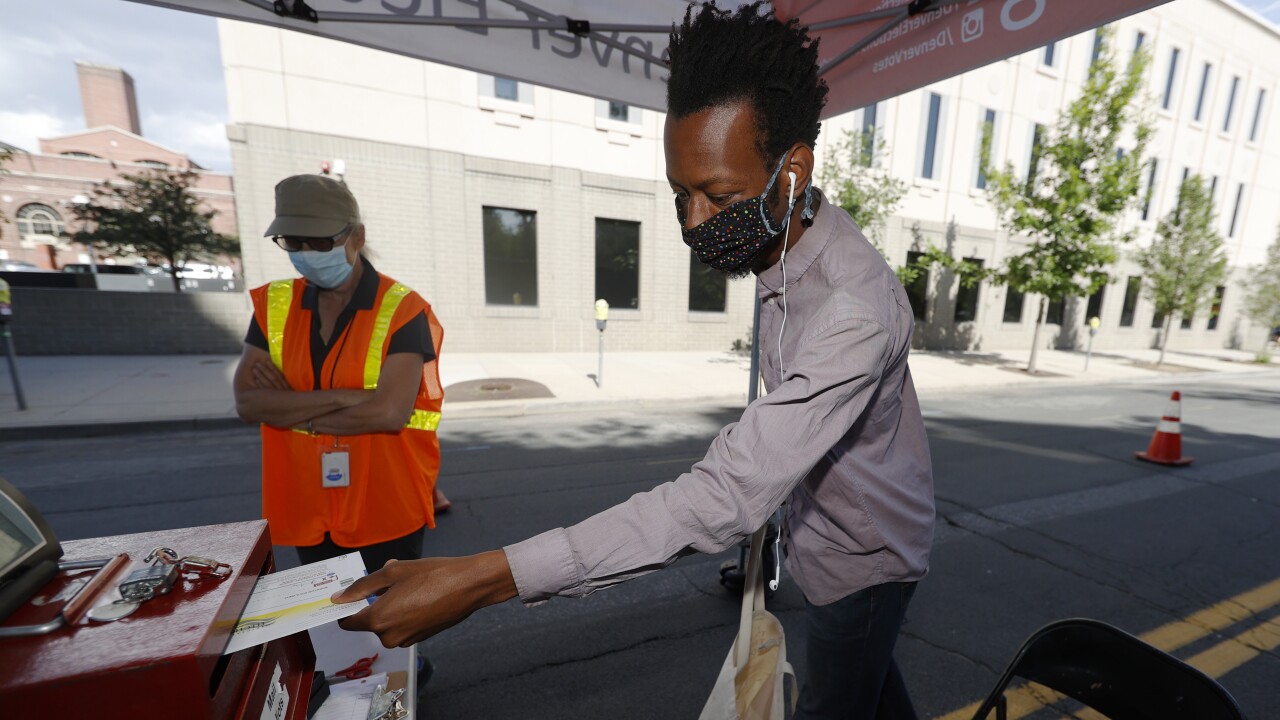 (Copyright 2020 The Associated Press. All rights reserved. This material may not be published, broadcast, rewritten or redistributed.)
David Zalubowski/AP
Election judge Deborah Guess, back, looks on as Brenton Weyi drops off his ballot at a drive-thru location outside the Denver Election Commission building Tuesday, June 30, 2020, in downtown Denver. (AP Photo/David Zalubowski)

DENVER – Colorado’s 2020 primary election is Tuesday and voters will decide who they wish to represent each party in a U.S. Senate race, congressional races, state House and Senate races, district attorney races, regent races and board of education races.

Denver7 will be providing live updates throughout Election Night as polls close and results come in from county elections officials and the Secretary of State’s Office.

The newest updates will be found at the top of this story. Refresh the page for the latest.

While ballots are still being processed and military and overseas ballots are still coming in, Griswold said that 99.3% of ballots so far were either mailed back or returned via drop boxes. She again lauded Colorado’s system.

“In midst of the COVID-19 pandemic, Colorado just set a record turnout for a state primary. A total of 99.3% of voters cast a mail ballot, and there were not lengthy lines or wait times reported at in-person voting centers,” Griswold said in a statement. “Despite misleading attacks, disinformation, and attempts to make vote-by-mail a partisan issue, Colorado’s election proves that mail ballots are the key to accessible voting during this health crisis.”

The latest data from her office show that 918,374 Democratic ballots were returned, along with 565,805 Republican ballots. Among those, nearly one-third – 509,422 ballots – came from unaffiliated voters.

We're going to wrap this live blog up for the night and get some rest. We'll be back with more updates on outstanding races starting at 4:30 a.m. on Denver7 Mornings, which you can stream here.

You can also see the latest results on our Election Results page or over at the Secretary of State's page.

Check back Wednesday for more updates on Tuesday's primary results from the Denver7 team.

“I am honored and humbled that the people of the 18th Judicial District supported my vision for a more just District Attorney’s Office,” Padden said in a statement. “It is important that we have a true progressive to reform the office from the regressive state George Brauchler has put it in, and I am thrilled that the voters of the four counties of the 18th Judicial District decided I am the right woman for that job.”

And in the 1st Judicial District Democratic primary, Alexis King defeated challenger Jake Lilly 67% to 33% as of Tuesday night.

Click here for more results on district attorney races from across the state.

Several incumbent candidates in the state House and Senate appear poised to win their primary challenges. Democratic HD6 Rep. Steven Woodrow was leading his two challengers with 46% of the vote as of 10:30 p.m.

In the Republican primary for HD49, current state Sen. Vicki Marble was defeated by Mike Lynch.

Lauren Boebert said in an interview Tuesday night that November’s Third Congressional District race will be “a fight for freedom against the Democrats.”

“People don’t want the government telling them how to live their lives,” she said. “They want to be free and live their own lives and pursue their own happiness, and I’ll fight for that every day.”

Boebert said she “didn’t feel like we were being represented effectively” in regard to her challenge against Tipton, but said she would try to win over his supporters.

“It’s time to rally together and get everyone who supported Congressman Tipton to join us in this fight,” she said.

Click here to read the full story about her victory.

One day after President Trump endorsed her opponent, incumbent Scott Tipton, he is tweeting congratulations to Lauren Boebert, who defeated Tipton on Tuesday in the Republican primary for Colorado’s Third Congressional District seat.

“Congratulations on a really great win!” he tweeted.

More on the biggest upset of the night in Colorado here.

“3rd District Republicans have decided who they want to run against the Democrats this November. I want to congratulate Lauren Boebert and wish her and her supporters well,” Tipton said in a statement.

Tipton is in his fifth term as the Third Congressional District representative. Boebert owns Shooters Grill in Rifle, where employees open-carry firearms while serving and which was shut down by health officials when she opened in lieu of Colorado public health guidance last month.

Now, Boebert will face Mitsch Bush in this year’s General Election. She defeated James Iacino 61% to 39% in the Democratic primary in the Third Congressional District, according to 9 p.m. returns.

8:33 p.m. | Hickenlooper, Romanoff address supporters and one another

“This is obviously not the outcome we were hoping for,” Romanoff said in a news conference Tuesday evening, also acknowledging that he lost his father this week. “I’ve learned this week there are far more important things than losing an election.”

Romanoff said he had called Hickenlooper to congratulate him and to pledge his “full support” for Hickenlooper in the race against Gardner.

“For all the differences we had, and there were many, I’m equally committed to making sure that Cory Gardner is a one-term senator,” Romanoff said, adding that he hoped his supporters would do so as well.

Hickenlooper addressed his victory and his supporters in a news conference around 8:20 p.m.

“Change is coming, and you and I are going to bring it together,” Hickenlooper said in an address around 8:30 p.m. in which he thanked his supporters, staff and Romanoff for their support and for Romanoff’s pledge to work together.

“It’s going to take all of us together to beat Cory Gardner,” Hickenlooper said. “…I’ve never lost an election in this state, and I don’t intend to lose another.”

Diane Mitsch Bush defeated James Iacino in the Democratic primary for the Colorado Third Congressional District race, the AP called at 7:50 p.m. As of 8:15 p.m., she led with 61% compared to Iacino’s 39%. Mitsch Bush lost to incumbent Republican Scott Tipton in 2018. Tipton is currently running about 10% behind challenger Lauren Boebert in the Republican primary in the district.

Hickenlooper had won 60% of the vote as of 8 p.m., compared to Romanoff’s 40% of the vote, with around 715,000 ballots counted and more counting still underway.

The Associated Press called the race at 7:21 p.m. Tuesday – just 21 minutes after polls closed in Colorado.

Hickenlooper will now face Gardner in a matchup that both campaigns have been waiting on for months. Gardner’s campaign and Republican groups have focused most of their attacks on Hickenlooper since he entered the race and have not paid as close of attention to Romanoff.

A May poll from Colorado found that Hickenlooper led Gardner 54% to 36% in a theoretical November matchup.

“This is obviously not the outcome we were hoping for,” Romanoff said in a news conference Tuesday evening, also acknowledging that he lost his father this week. “I’ve learned this week there are far more important things than losing an election.”

Romanoff said he had called Hickenlooper to congratulate him and to pledge his “full support” for Hickenlooper in the race against Gardner.

“For all the differences we had, and there were many, I’m equally committed to making sure that Cory Gardner is a one-term senator,” Romanoff said, adding that he hoped his supporters would do so as well.

Hickenlooper had won 60% of the vote as of 7:25 p.m., compared to Romanoff’s 40% of the vote, with ballots still being counted.

We will have a full story up shortly.

With 432,017 votes in, John Hickenlooper leads Andrew Romanoff in the U.S. Senate Democratic primary 59% to 41%

In the first drop of numbers, and with very early returns, John Hickenlooper leads Andrew Romanoff 56% to 44% with 167,000 votes in.

In CO03, Diane Mitsch Bush leads James Iacino 65% to 35% in the Democratic primary, and Lauren Boebert leads incumbent Scott Tipton 64% to 36% in the Republican primary.

It's 7 p.m., which means polls and drop boxes are now closed in Colorado. We expect to start seeing some numbers here before long on our election results page. You can also get updates from the Secretary of State's Office.

According to the Secretary of State’s Office, Coloradans had submitted 1,370,184 ballots as of 4 p.m.

Some of the new ballots were still being processed, but Democratic ballots total 796,467 and Republican ballots totaled 511,789.

Polls and drop boxes will close at 7 p.m., and we should start seeing some updated initial numbers not too long afterward.

As of noon Monday, Colorado voters had returned 1,279,267 ballots for Tuesday’s primary election – already topping the number of total ballots cast in the 2018 primary, when about 1.1 million Coloradans voted.

In total, 404,456 unaffiliated voters had returned ballots by noon.

Women aged 55-74 have turned in the highest number of ballots so far, followed by men in that age group.

Trends showing high voter turnout have continued since the weekend. Secretary of State Jena Griswold said last week she expected turnout to be high in Colorado.

Among the high-profile races that Coloradans are casting votes in are the U.S. Senate Democratic primary between former Gov. John Hickenlooper and former House Speaker Andrew Romanoff, and primaries on both the Republican and Democratic sides in the Third Congressional District race for the seat currently held by Rep. Scott Tipton, a Republican.

Tipton faces Lauren Boebert in the primary, who has said she is challenging Tipton from the right. Diane Mitsch Bush, whom Tipton defeated in the 2018 midterm election by about 8 percentage points, faces James Iacino.

Voters have until 7 p.m. to drop off their ballots or to vote in-person at a polling center. Click here for more details on where to find those in your area.