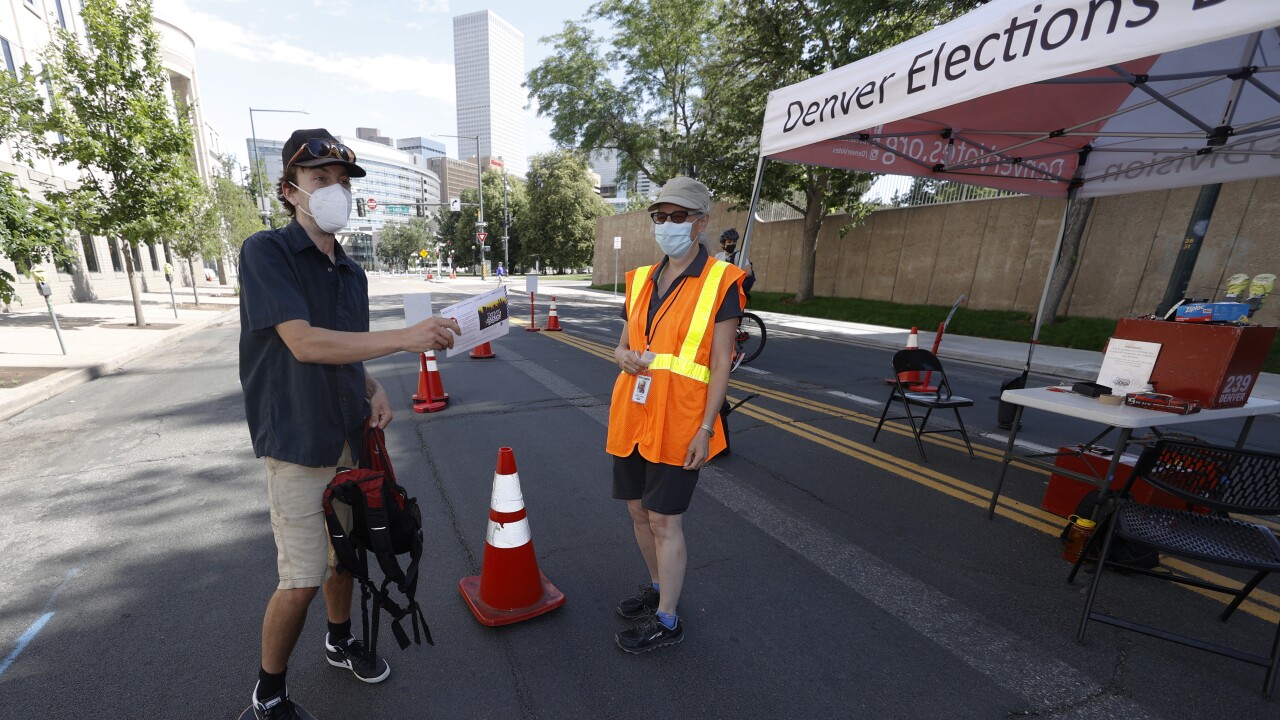 (Copyright 2020 The Associated Press. All rights reserved. This material may not be published, broadcast, rewritten or redistributed.)
David Zalubowski/AP
Skateborder Daniel Levy, left, hands his ballot to election judge Deborah Guess as voters drop off their ballots at a drive-thru location outside the Denver Election Commission building Tuesday, June 30, 2020, in downtown Denver. (AP Photo/David Zalubowski)

That year was the first in which unaffiliated voters could participate in primary elections in the state.

While ballots are still being processed and military and overseas ballots are still coming in, Griswold said that 99.3% of ballots so far were either mailed back or returned via drop boxes. She again lauded Colorado’s system.

“In midst of the COVID-19 pandemic, Colorado just set a record turnout for a state primary. A total of 99.3% of voters cast a mail ballot, and there were not lengthy lines or wait times reported at in-person voting centers,” Griswold said in a statement. “Despite misleading attacks, disinformation, and attempts to make vote-by-mail a partisan issue, Colorado’s election proves that mail ballots are the key to accessible voting during this health crisis.”

The latest data from her office show that 918,374 Democratic ballots were returned, along with 565,805 Republican ballots. Among those, nearly one-third – 509,422 ballots – came from unaffiliated voters.

Sixty percent of unaffiliated ballots processed so far were Democratic ballots, while 22.4% voted Republican ballots. Nearly 17% of unaffiliated ballots were still being processed, according to the latest data, so the party was still unknown. In Colorado, unaffiliated voters receive both a Republican and Democratic ballot in the mail but are only allowed to vote on of the ballots and must destroy the other. They can also pick a particular party ballot to be sent to them if they typically only vote for one party.

Griswold said that a greater share of voters (99.4%) who returned Republican ballots voted with their mail ballot than those who returned Democratic ballots (99.2%).

Turnout in the March presidential primary was slightly higher than the state primary – with 1,806,288 ballots counted.

Griswold has been among those most vocal in pushing back against attacks from President Trump and some others on mail-ballot states in recent months as the COVID-19 pandemic spread and more states looked toward a system like Colorado’s to conduct their primary elections and likely their November General Elections.

After Trump claimed last week, without evidence, that “there are thousands of cases” of voter fraud in the U.S. every year, she went on the offensive.

“So, mail ballots, it’s not about making the scale uneven. It’s about allowing access for American voters,” Griswold said in an interview at the time. “This is about as nonpartisan as you can get, and I just think that it’s a shame that the president believes that his only chance for re-election is railing against an election system that allows Americans to safeguard their health and their voice in the 2020 elections.”

Election officials will be counting military and overseas ballots cast by 7 p.m. Tuesday up until July 8, when results will be finalized ahead of the July 10 risk-limiting audit. Results will be official July 21, three weeks after election day.