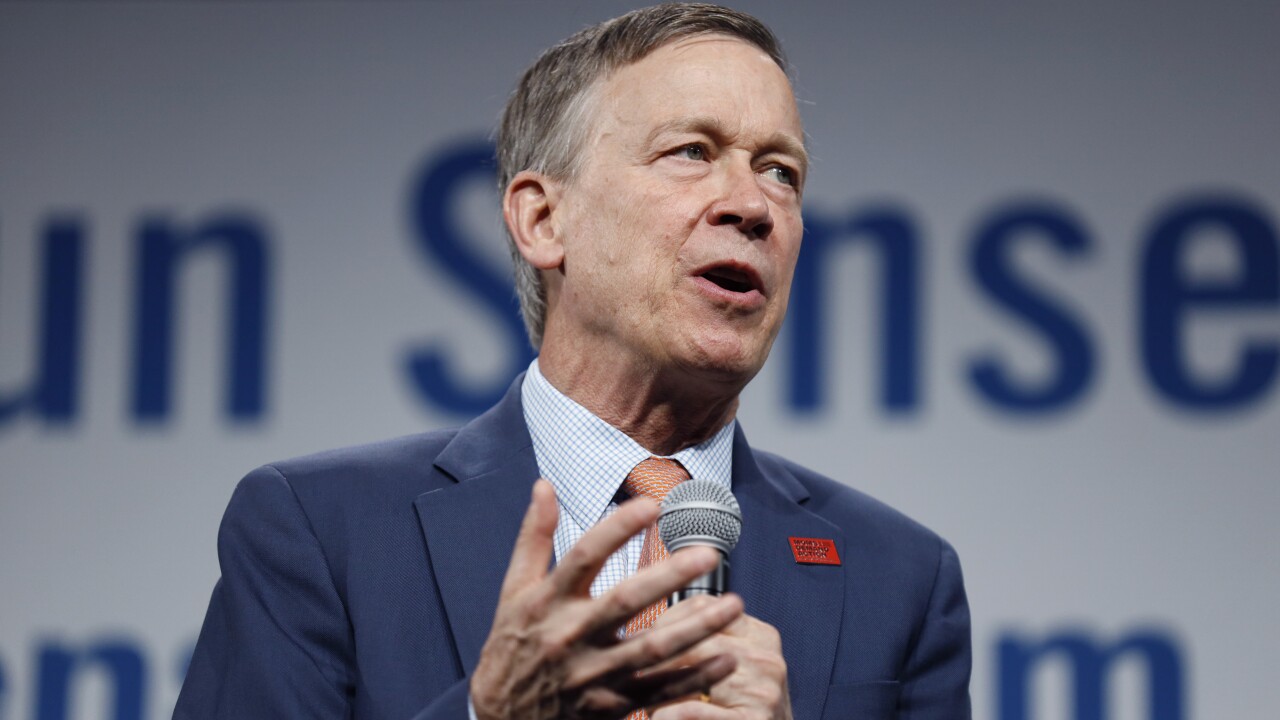 (Copyright 2020 The Associated Press. All rights reserved. This material may not be published, broadcast, rewritten or redistributed.)
Charlie Neibergall/AP
FILE - In this Aug. 10, 2019, file photo, then Democratic presidential candidate former Colorado Gov. John Hickenlooper speaks at the Presidential Gun Sense Forum in Des Moines, Iowa. The Colorado Ethics Commission is releasing an investigation into John Hickenlooper's use of private planes while governor. A Republican critic filed a complaint alleging Hickenlooper had improperly traveled on private flights during his administration. (AP Photo/Charlie Neibergall, File)

The poll from Keating Research, OnSight Public Affairs and Mike Melanson – Democratic firms and a former Hickenlooper campaign staffer – polled 600 Coloradans in an online survey between May 1 and 3, with a margin of error of ±4%. Click here to view the crosstabs.

It is the first poll released by the firms since October and shows some change in viewpoints of Coloradans on the president, this year’s U.S. Senate race, and the response by Polis and other officials to the COVID-19 outbreak. It was based on likely November voters and weighted toward demographic voting trends.

President Trump’s favorability is at its lowest point in three years, according to polling from the firms. In the latest survey, 37% of respondents said they viewed him favorably, compared to 62% who view him unfavorably. That gap increased from 38% favorable-60% unfavorable last October.

Fifty-nine percent of respondents said they disapproved of the job the president is doing in his handling of the coronavirus, compared to 34% who approved.

And if Trump faces former Vice President Joe Biden, currently the presumptive Democratic nominee, in November, the poll indicates he would lose. Fifty-five percent of respondents to the poll said they would lean Biden, compared to 36% who said they leaned toward voting for Trump.

Gardner is viewed more favorably (37%) than he was in October (34%), according to the poll. But a greater share of respondents also said they viewed him unfavorably (53%) than did in October’s poll (45%).

The poll also asked respondents if they would vote for Gardner or former Gov. John Hickenlooper, who is one of two possible Democratic nominees at this point, in a theoretical November matchup between the two.

And the people polled have overwhelmingly agreed with the governor’s actions in response to COVID-19, with 71% saying they approve of his handling of the outbreak, compared to 19% who said they disapproved.

Sixty-eight percent of respondents said they approved of Polis lifting the statewide stay-at-home order and implementing the safer at home phase, compared to 21% who opposed the move.

In Adams, Arapahoe, Boulder, Broomfield, Denver and Jefferson counties, 78% of the 283 respondents said they supported those counties extending their stay-at-home orders through the end of this Friday.

And 78% of respondents said they believed people should be required to wear a mask or face covering when they go into a store, bank or workplace.