Gardner, Hickenlooper spar over past in Senate debate but find some points of agreement 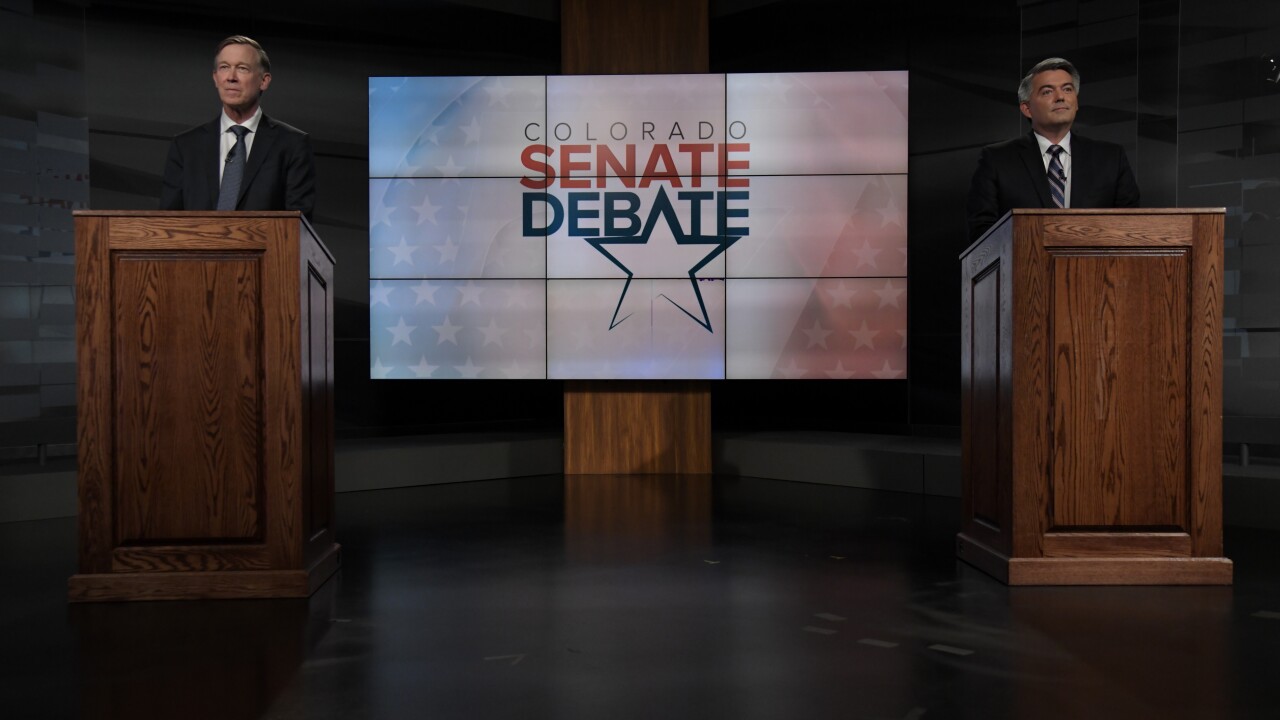 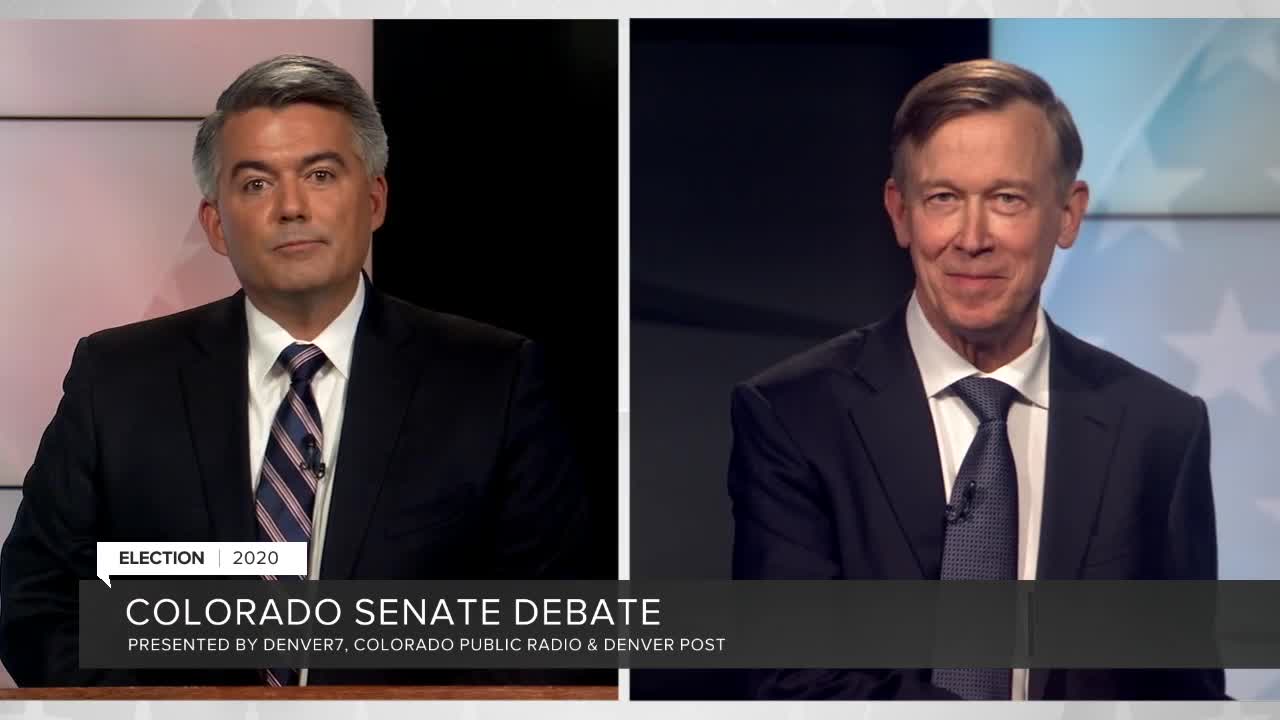 DENVER – U.S. Sen. Cory Gardner and former Gov. John Hickenlooper were kept mostly in check by moderators in their first televised English-language debate of 2020 as both continued to snipe at one another’s past records and argue whether or not each has truly served the people of Colorado.

“He thinks it’s all about him!” was a common refrain from Gardner regarding his Democratic opponent for Colorado’s U.S. Senate seat as the senator continued to try to paint Hickenlooper as someone whose self-interests outweigh those of voters across the state.

But Hickenlooper said as much about Gardner, painting him as a Trump loyalist who has stood for the president’s agenda more than he has considered the wants and needs of Coloradans statewide.

Hickenlooper slammed the “incompetence” of President Trump and his administration’s response to the coronavirus pandemic and the lack of passage of another stimulus package for workers, small businesses and local governments. He said that the Senate has dragged its feet while trying to pass bills that do not address the full scope of the pandemic or recession and that he believed his gubernatorial administration put processes in place for a proper state response, though he acknowledged they could have been improved.

Gardner said that the response needed to improve and that he has “worked every day to be sure we are proud of our response.” He said that Democrats should have supported a skinny stimulus bill that was rejected in the Senate last month, which Hickenlooper said did not contain enough financial support, though Gardner disagreed.

Both eventually said they would support another round of stimulus checks of some sort for Americans.

Regarding health care and the Affordable Care Act, Gardner continued to tout his bill, which he says protects pre-existing conditions, but which fact-checkers have said does not. Hickenlooper said that he believes the Affordable Care Act, whose provisions are again being considered by the U.S. Supreme Court, should be built upon with a sliding-scale public option.

Hickenlooper said he supported Joe Biden’s proposal to drop the age at which people can begin to opt-in to Medicare from 65 to 60, while Gardner said he did not. Both said they did not support Medicare For All. Both said they opposed a national mask mandate.

Gardner, who has voted with President Trump’s agenda 90% of the time he has been in office, according to FiveThirtyEight’s tracker, was asked if 100% of Coloradans would support Trump’s agenda. Gardner did not directly answer the question.

“I believe that’s what I have done and will continue to do,” he said, touting some of the measures he helped pass or sponsored, which have appeared in many advertisements in recent months.

Gardner, who did not vote for President Trump in 2016 but endorsed him for re-election, said of his 2016 vote that he wanted “to make sure Hillary Clinton did not win the White House” and said he is now “proud of the work we’ve done together because it’s been good for the state of Colorado.”

Hickenlooper slammed Gardner for his support of the president and for not speaking out publicly more often when, and if, he disagreed with the president.

Both candidates agreed that getting another coronavirus package passed was a bigger priority for the Senate than confirming Amy Coney Barrett to the U.S. Supreme Court, as Gardner has said he would do.

But Gardner made clear that he will vote for Barrett before the election despite flip-flopping from 2016, when he said that a Supreme Court justice should not be confirmed in an election year. Hickenlooper, who in 2016 said that a justice should be confirmed that year, said the difference this year was the timing, as Merrick Garland was nominated in March 2016 and Barrett was nominated on Sept. 26.

Hickenlooper dodged a question from the moderators – and later Gardner, who tried multiple times to ask Hickenlooper questions of his own — about so-called “court packing” if Democrats win the White House and Senate this year, which is the idea that they could simply choose to add more justices to the Supreme Court to change the balance away from conservative justices should Barrett be confirmed.

The former governor said he did not believe Barrett would get the votes needed in the Senate, saying that he believes Republican senators up for the election will back down from confirming her before the election in an effort to save their seats.

When pressed on his two ethics violations, which have been the target of many ads and debate attacks from Gardner, Hickenlooper continued to say that he was only found to have committed the two out of dozens that were filed, and claimed Gardner was using the violations as fodder in the election in order to draw attention away from himself.

The two candidates were also asked about recent New York Times reporting that showed Trump in some years has paid no taxes and has at times paid just $750, which did draw a perhaps unexpected response from Gardner.

“I encourage the president to release his tax returns,” the senator said.

Hickenlooper questioned whether the president’s reported debt was influencing his negotiations with foreign countries, as the entities to whom he owes money remains unknown to the public.

“The bottom line is everybody should pay their fair share,” the former governor said.

Both said they condemned white supremacy and the plot to kidnap Michigan’s governor that was unveiled this week. When asked if he believed President Trump's words have inspired domestic terrorism, Gardner said he did not, while Hickenlooper answered, "Quite possibly, yes." The two did, however, agree that they have faith in Colorado’s election system and that they would accept the outcome of the elections. Both agreed that climate change was caused primarily due to human activity.

Hickenlooper pledged to do four town halls a year if he becomes senator, while Gardner, who has done few in-person town halls in Colorado since 2016, claimed that his mostly non-publicized appearances show that he has appeared across the state “over and over again.”

Both candidates said they supported a pathway to citizenship for all undocumented people, not just DREAMers, and both agreed that recreational marijuana should be legalized on the federal level, though Hickenlooper also mentioned decriminalization.

Hickenlooper said he supported gradually raising the federal minimum wage to $15 an hour, while Gardner did not directly answer the question, saying that “growing the economy” would get the nation there.

Hickenlooper said William Perry Pendley should not be in leadership at the U.S. Bureau of Land Management, while Gardner did not answer the question. Both said they would support term limits for senators and that local communities should be able to set up designated camping areas for people experiencing homelessness if they so choose.

Hickenlooper gave a non-answer when asked whether law enforcement officers should have qualified immunity, saying that it was already agreed to in Colorado with Senate Bill 217, while Gardner said officers should.

Asked about balancing free enterprise and free speech on technology platforms amid the fervent spread of disinformation and conspiracy theories, Hickenlooper said there “have to be standards set for what is real and what is propaganda or lies,” while Gardner talked about censorship of voices that has been a common talking point among conservatives over the past year or so.

“We can’t allow speech, whether it’s from the left or right, to be censored,” Gardner said.

Finally, before delivering their closing remarks, the two candidates were asked to grade their campaign on an A-F scale based on how positive or negative it has been.

Hickenlooper said he would give himself a “B” grade and said he originally believed he would get through the election without running negative ads but claimed that the ads against him forced him to turn foot and “tell the truth about Cory Gardner.”

Gardner refused to give himself a grade but touted his legislation one more time surrounding the Bureau of Land Management headquarters move to Colorado, the Great American Outdoors Act, among other things, and said his grade would be determined by the outcome of the election.

“The people of Colorado will be doing that soon enough,” he said.

Editor's Note: The Oct. 9 debate between Gardner and Hickenlooper was hosted by Denver7, The Denver Post and Colorado Public Radio News.