Drought expands to 95% of Colorado, with more than one-third of state seeing extreme drought

Colorado was 100% drought-free a year ago Thursday 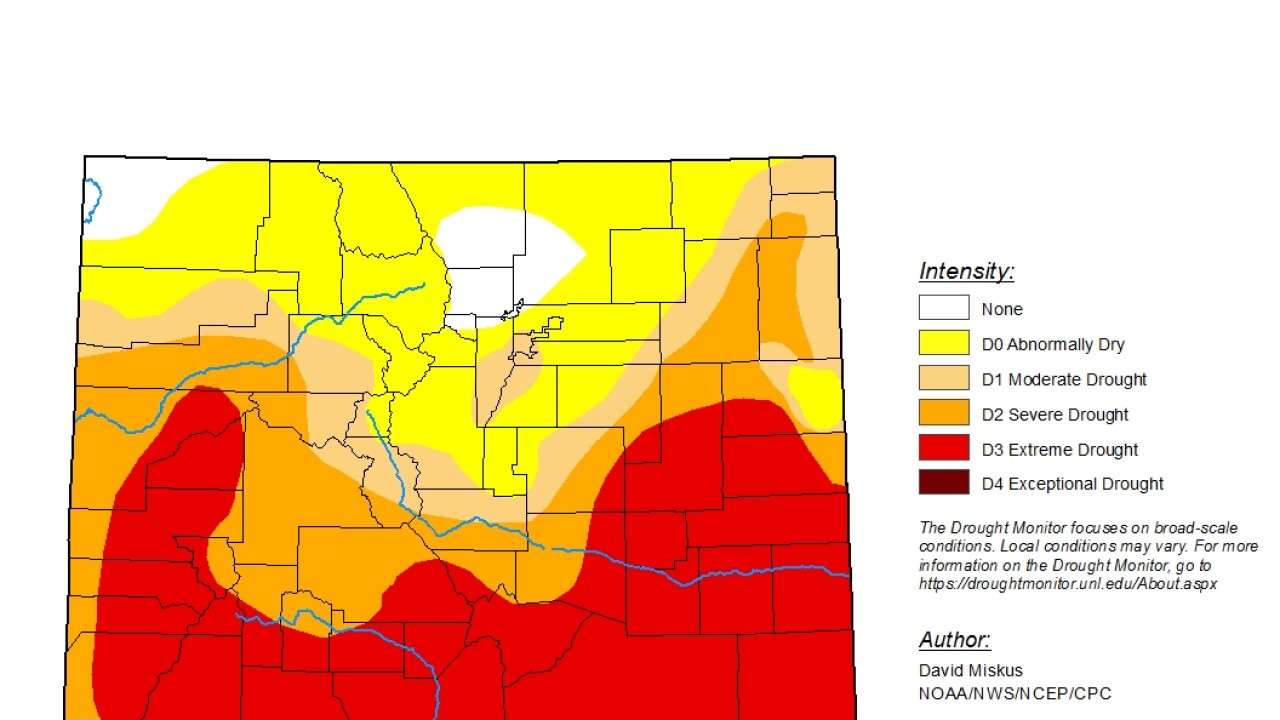 Copyright 2020 Scripps Media, Inc. All rights reserved. This material may not be published, broadcast, rewritten, or redistributed.
US Drought Monitor
Ninety-five percent of Colorado is now abnormally dry as the drought here, which is among the worst in the nation currently, continues to expand.

DENVER – Ninety-five percent of Colorado is now abnormally dry as the drought here, which is among the worst in the nation currently, continues to expand.

Another 10% of Colorado reached abnormally dry levels over the past week, according to the U.S. Drought Monitor’s weekly report.

The drought has now seeped in to every county in Colorado, with just seven counties that have pockets of land that are drought-free – all of them in northern Colorado. Almost the entirety of southern Colorado is under extreme drought conditions.

Colorado has the largest amount of land under extreme drought conditions currently of anywhere in the United States. Only Utah has more land mass under any sort of drought condition than Colorado.

Colorado has not experienced this widespread of a drought since February 2018, when 99% of the state was considered abnormally dry and 76% of the state was under moderate drought conditions, according to the Drought Monitor.

Several wildfires have burned across the state over the past week. In late June, Gov. Jared Polis activated the state’s Drought Task Force and drought plan for 40 counties experiencing severe or extreme drought conditions. Most of the state is under either Stage 1 or Stage 2 fire restrictions.

While much of Colorado saw cooler and wetter weather the past couple of days, the heat will return on Thursday, with temperatures in the 90s along the Front Range. Temperatures are expected to climb toward the weekend, and Saturday is expected to reach close to 100 degrees.

The National Weather Service says those high temperatures and low relative humidity will lead to high fire dangers over the north-central mountains on Saturday. A chance of cooler weather and storms are expected Sunday into early next week.