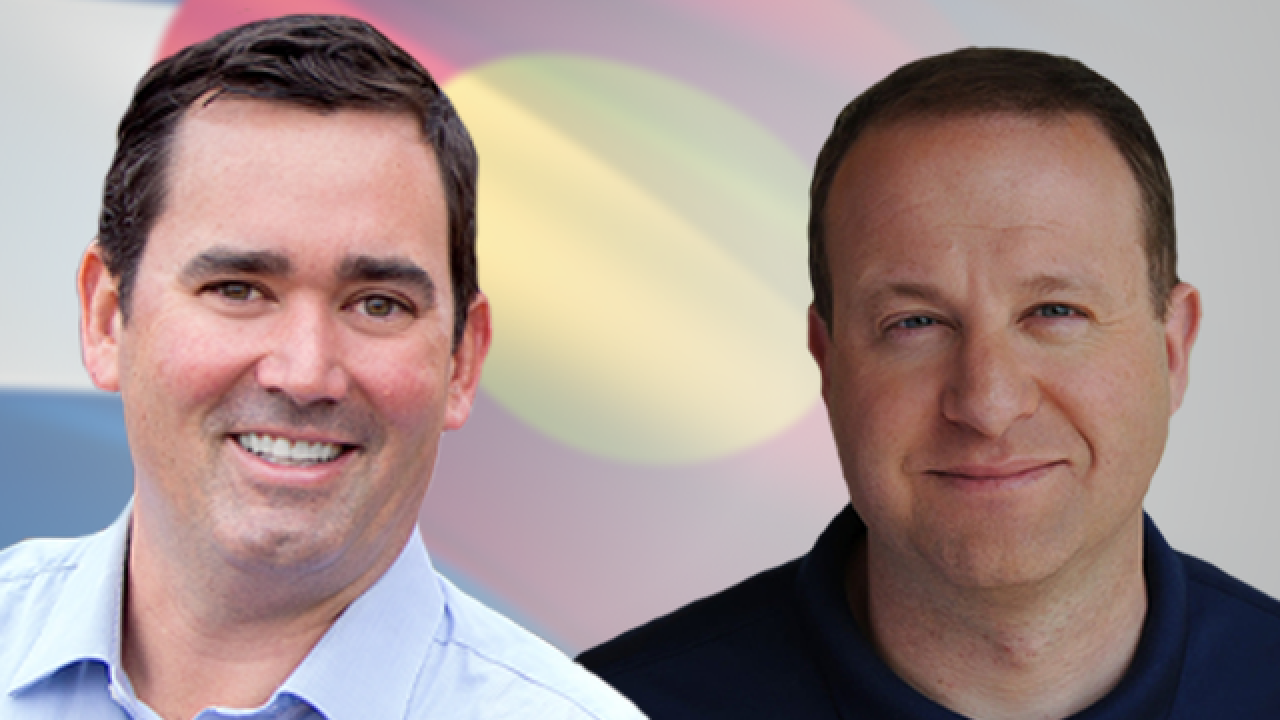 Copyright 2018 Scripps Media, Inc. All rights reserved. This material may not be published, broadcast, rewritten, or redistributed.
<p>Democrat Jared Polis and Republican Walker Stapleton clinched their respective party’s nominations in the Colorado gubernatorial race in Tuesday’s primaries, setting up a November contest that will pit a five-term liberal Congressman who has pledged to fight the Trump administration against a two-term state treasurer who has increasingly aligned himself with the president.</p>

DENVER – Rep. Jared Polis leads state Treasurer Walker Stapleton by 7 points in the Colorado governor’s race, according to the first publicly-released poll of the race done in recent months.

Polis, a Democrat, leads primarily because of his support among unaffiliated voters and women, according to the poll by Colorado-based research firms Magellan Strategies and Keating Research, which was commissioned by the nonpartisan health advocacy group Healthier Colorado.

The poll surveyed 600 likely Colorado voters via cell phone and landline between Sept. 18 and 20. The respondents were weighted to be in line with turnout data from prior midterm elections in Colorado.

The poll found that Polis leads Stapleton 47 percent to 40 percent, though 11 percent of respondents were undecided, meaning that group could theoretically swing the vote either way come November. The margin of error for the poll was ±4 percent.

The swing for Polis among unaffiliated and women voters continues to be among the factors analysts have discussed when eyeing the possibilities of a “blue wave” in November.

In addition to Polis and Stapleton, the survey asked about whether respondents would support Libertarian candidate Scott Helker or Unity Party candidate Bill Hammons for governor. The response was overwhelmingly “no.”

The poll shows that many of the voters who are still undecided are unaffiliated—which is also the state’s largest group of voters. Just 5 percent of Democratic and Republican voters said they were undecided in the governor’s race, though 24 percent of unaffiliated respondents said they still hadn’t picked a candidate.

Both Polis and Stapleton have dominated the airwaves in recent weeks, with ballots set to be mailed out in the first half of the month. Both are trying to replace the term-limited Gov. John Hickenlooper, a Democrat.

Aside from the governor’s race, the poll also asked a handful of health policy questions picked by Healthier Colorado, including increasing the age at which Coloradans can purchase tobacco products to 21, taxing e-cigarettes and vaping devices at the same rate as cigarettes and tobacco products, red flag laws and health insurance options.

The poll found that no matter which gubernatorial candidate a respondent supported, a wider majority of them supported changes to some of those policies.

“No matter who wins the race for governor or which party controls the Colorado House or Senate, Colorado voters of all political stripes clearly agree that we should make progress on health policy,” said Healthier Colorado executive director Jake Williams in a statement attached to the poll.

Seventy-six percent of respondents said Colorado should raise the age at which people can buy tobacco products to 21—the same as alcohol and marijuana.

Similarly, 73 percent of those polled said e-cigs and vaping devices and products should be taxed at the same rate and tobacco products.

Seventy-five percent of respondents said people who have limited or expensive health insurance should be able to buy an insurance plan from the state’s Medicaid program, and 70 percent said they supported the lawsuit recently filed by Colorado Attorney General Cynthia Coffman against opioid manufacturers over misleading the public about the risks of opioids.

The poll also asked about the “red flag law” that Colorado lawmakers from both parties tried to pass during the 2018 session, but which ultimately failed. But 76 percent of respondents to the poll said they would support the passage of such a law, which would allow a judge to temporarily take guns away from people based on evidence they are risks to themselves or others.

“While voters debate the outcome of Colorado’s gubernatorial race, there is no debate that a strong majority of Colorado voters—regardless of their party affiliation—support the key health policies tested in this poll,” said Magellan Strategies CEO David Flaherty in a statement attached to the poll.