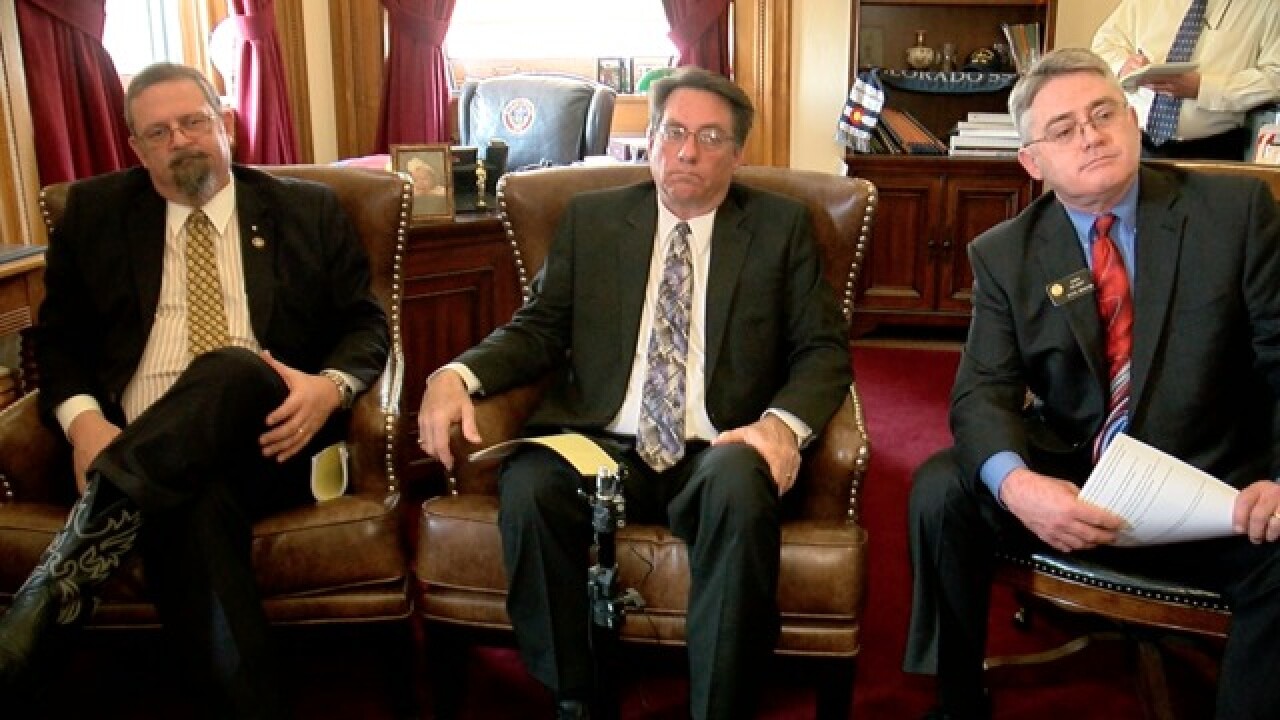 Copyright 2017 Scripps Media, Inc. All rights reserved. This material may not be published, broadcast, rewritten, or redistributed.
<p>By Monday afternoon, Colorado's red flag bill had been released over to the Senate, where President Kevin Grantham, R-Canon City, said it would be headed for the State, Military and Veterans Affairs Committee, where it will likely see its demise.</p>

DENVER – A Republican-led state Senate committee has defeated a "red flag" bill designed to prevent those in crisis from harming themselves or others with guns.

And in order to keeping it from being killed in a Senate committee after dark, the other prime co-sponsor, Assistant Majority Leader Alec Garnett, D-Denver, put a procedural hold on the measure – a motion to reconsider the third reading vote.

But by Monday afternoon, the bill had been released over to the Senate, where President Kevin Grantham, R-Canon City, said it would be headed for the Senate State, Military and Veterans Affairs Committee, where it will likely see its demise.

“I don’t think it’s any secret where the three members stand on that particular subject when it comes to the potential for gun confiscation without proper due process,” Grantham said in his weekly press briefing. “So I don’t think it should be any surprise what happens to that bill once it goes through committee.”

The three Republicans on that committee – Sens. Vicki Marble, Jerry Sonnenberg and Owen Hill – have voted against similar gun measures. And Sonnenberg made clear how he felt about the bill’s chances Monday morning as well.

“I got the biggest round of applause Saturday at the Lincoln Day Dinner in Elbert County when we talked about the red flag bill and its demise,” Sonnenberg said.

Asked if there was any divide in the Senate like the small rift between House Republicans, Senate Majority Leader Chris Holbert said there was not. And when Grantham was asked about the support from Wist, Rep. Dan Thurlow (who also voted in favor of the measure) and 18th Judicial District Attorney George Brauchler, a Republican attorney general candidate, for the bill, Grantham laughed.

“There’s three against the rest of us,” he said.

The State, Veterans and Military Affairs Committee took up the bill Monday afternoon, with Douglas County Sheriff Tony Spurlock, a Republican who supports the measure, telling Hill that the legislature would never be able to pass a bill that's "perfect in any way."

Asked for comment Monday evening regarding the vote that ultimately ended up killing the bill, Spurlock said he was "very disappointed in the Senate's decision" and added he hoped lawmakers plan to work on mental health-related bills next session.