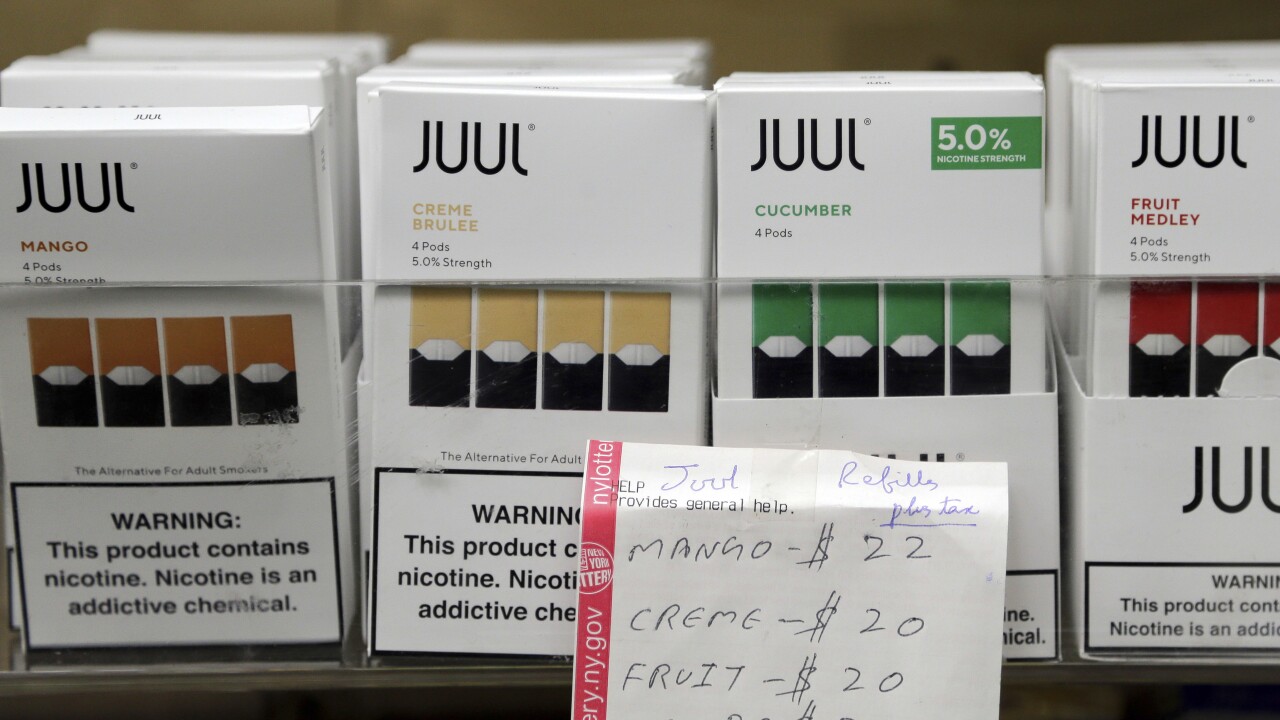 (Copyright 2020 The Associated Press. All rights reserved. This material may not be published, broadcast, rewritten or redistributed.)
Seth Wenig/AP
FILE - In this Dec. 20, 2018 file photo, Juul products are displayed at a smoke shop in New York. New York's ban on flavored e-cigarettes is still held up in court but the state may try to keep it alive and expand it to include menthol. (AP Photo/Seth Wenig, File)

Weiser and his office filed the lawsuit in Denver District Court against Juul Labs, Inc., arguing that the company used sketchy advertising tactics to market their product to kids, downplayed the e-cigarette’s health risks and falsely claimed it was a health alternative to smoking cigarettes.

The suit says Juul violated the Colorado Consumer Protection Act and is asking the court to keep Juul from being able to continue their “deceptive trade practices and to prevent the undue proliferation of the scourge of e-cigarettes,” among other financial claims and relief.

The suit also alleges that the company has paid a company, Quit Media LLC, hundreds of thousands of dollars over the past year to promote through search engine optimization a website that Colorado claims was “a fake smoking cessation website.” The suit claims that Juul paid the company more than $700,000 to the company for each person who viewed the web page and then went to sign up with Juul for online purchases.

The announcement of the lawsuit comes almost a year after Weiser’s office, the Colorado Department of Health and Environment and Adams 12 Five Star Schools launched an investigation into the company’s marketing in August 2019.

The investigation was launched after the state’s youth vaping rate was found to be the highest in the nation in July 2018, when around 27% of high school students said they had used a vape product within the past month, which was around double the national rate. That rate has continued to rise nationally, the U.S. Food and Drug Administration has said.

According to the suit, Juul knowingly marketed misleading information to young people and used flavored vape juices to get young people addicted to nicotine.

“Addiction to e-cigarettes poses major health risks to Colorado youth,” Weiser said in a statement. “JUUL must be held accountable for its reckless, deceptive, and unconscionable marketing that specifically targeted youth, downplayed its nicotine content and the presence of dangerous chemicals, and deceptively claimed its products as a healthy alternative to cigarettes and as a smoking cessation device.”

High schools in Colorado whose staff and students were interviewed during the Colorado investigation said that vaping among high schoolers over the past couple of years has created “a serious addiction problem for the students and a detrimental impact on the school community,” according to the suit.

“The recent increase in media coverage about the dangers of vaping has not decreased students’ vaping,” one Horizon High School staffer reported. That same staffer also reported that “[s]tudents see JUULing as no different than having the latest iPhone, ear pods or name brand backpack.”

During the investigation, many staffers also reported how hard it was to detect when students were vaping and how distracting it was for those students – including some who are removed from school and placed in other learning environments when they are caught.

The suit claims that the company initially marketed to “cool kids” in an effort to get more young people hooked faster, including launch parties in New York and Los Angeles, and later in Colorado. In September 2015, according to the suit, the company ran more than 60 promo events across the Front Range, which the suit says drew in mostly young people and mostly people who had never smoked before – many of whom were most interested in the flavored cartridges, like mint and crème brûlée.

The lawsuit claims that Juul knew that those types of flavors and marketing would be appealing to young people and would draw them in to using the high-nicotine products, as have other similar lawsuits filed in the past year.

The state is asking the court to declare that Juul’s conduct is a “public nuisance” and to enjoin the company from continuing its alleged misleading marketing practices claimed in the suit. It is also asking for an order that would require Juul to pay damages to Colorado resulting from the claimed public nuisance, which could include funding youth vaping cessation and prevention programs.

The suit also asks the court to issue an order preventing Juul and its employees from employing deceptive trade and marketing practices practices, for the company to pay costs and expenses of the lawsuit, and for Juul to forget and pay any civil penalties in regard to the Colorado Consumer Protection Act.

Austin Finan, a spokesperson for Juul Labs, said in a statement that the company had already stopped producing flavored cartridges, TV, print and digital advertising as examples that the company was changing its practices.

“We will continue to reset the vapor category in the U.S. and seek to earn the trust of society by working cooperatively with attorneys general, legislators, regulators, public health officials, and other stakeholders to combat underage use and transition adult smokers from combustible cigarettes,” Finan said in a written statement.

He added “Our customer base is the world’s 1 billion adult smokers. We will respond to the allegations in the complaint through the appropriate legal channels.”

Five other Colorado counties – Denver, Eagle, Jefferson, Pitkin and Boulder – have also sued Juul Labs in federal court. In April, all five cases were transferred to the U.S. District Court for Northern California to be heard in consolidated pretrial proceedings along with dozens of other suits filed across the country against the e-cigarette company.