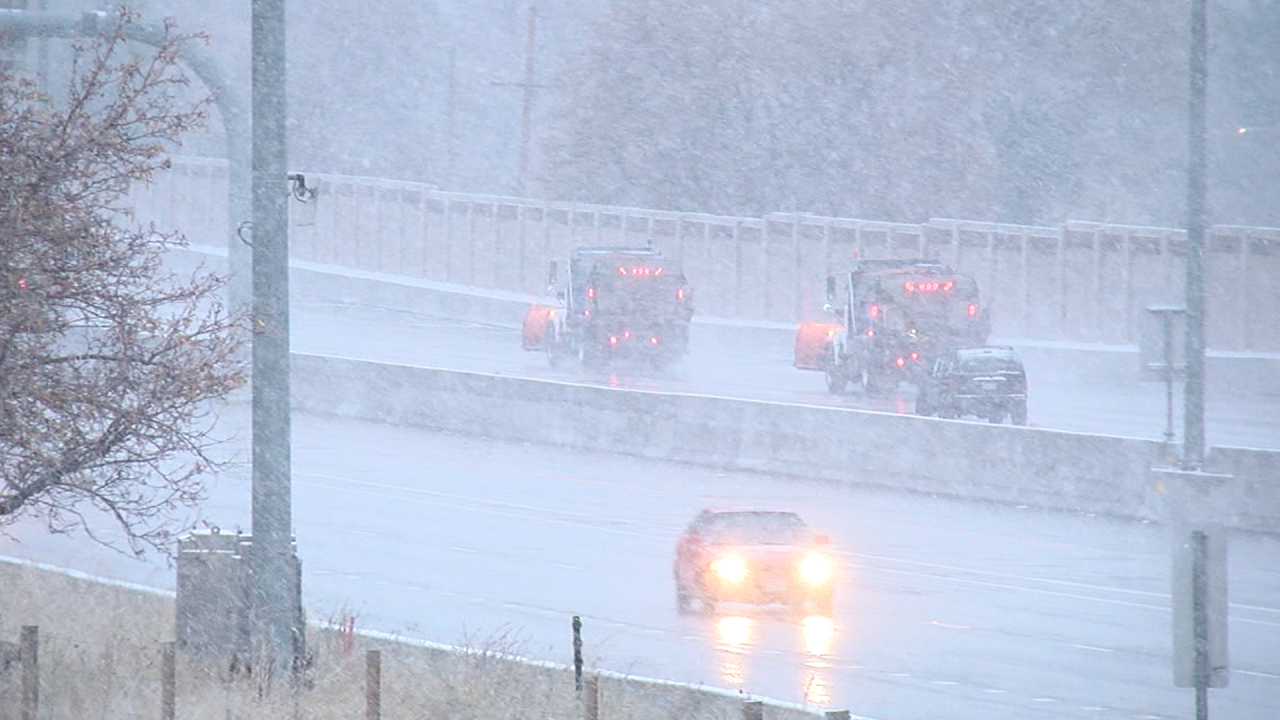 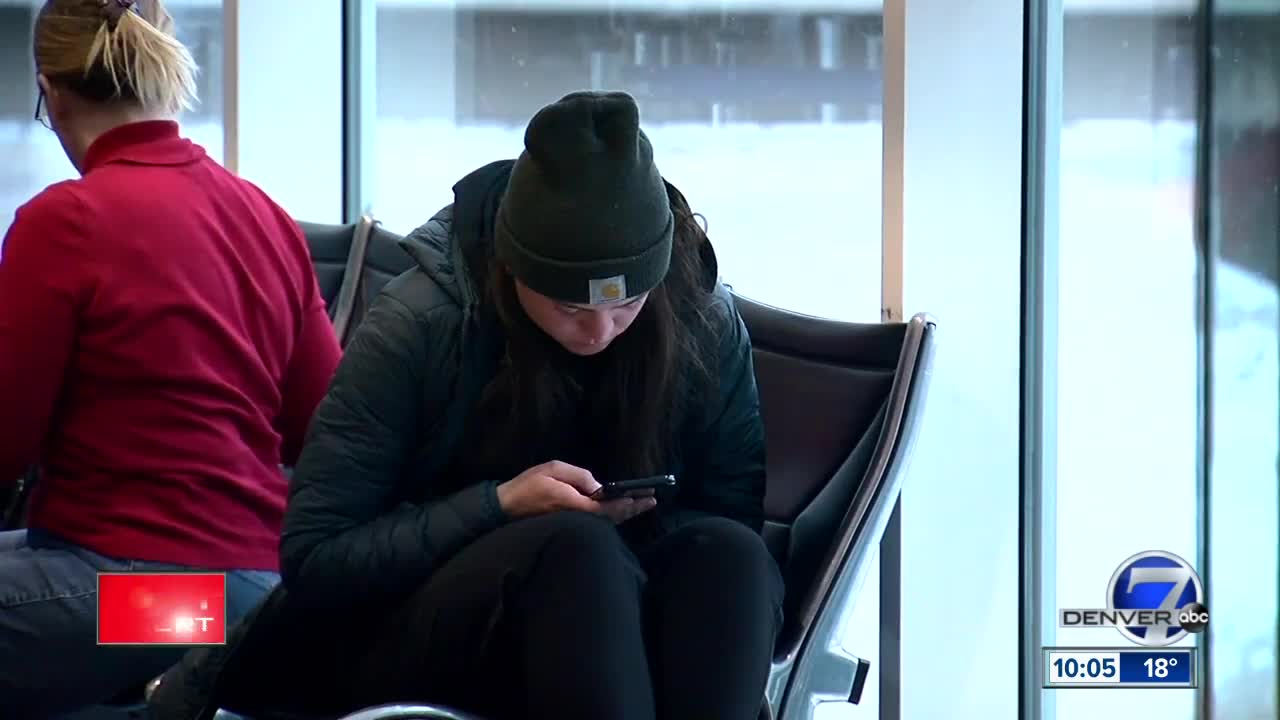 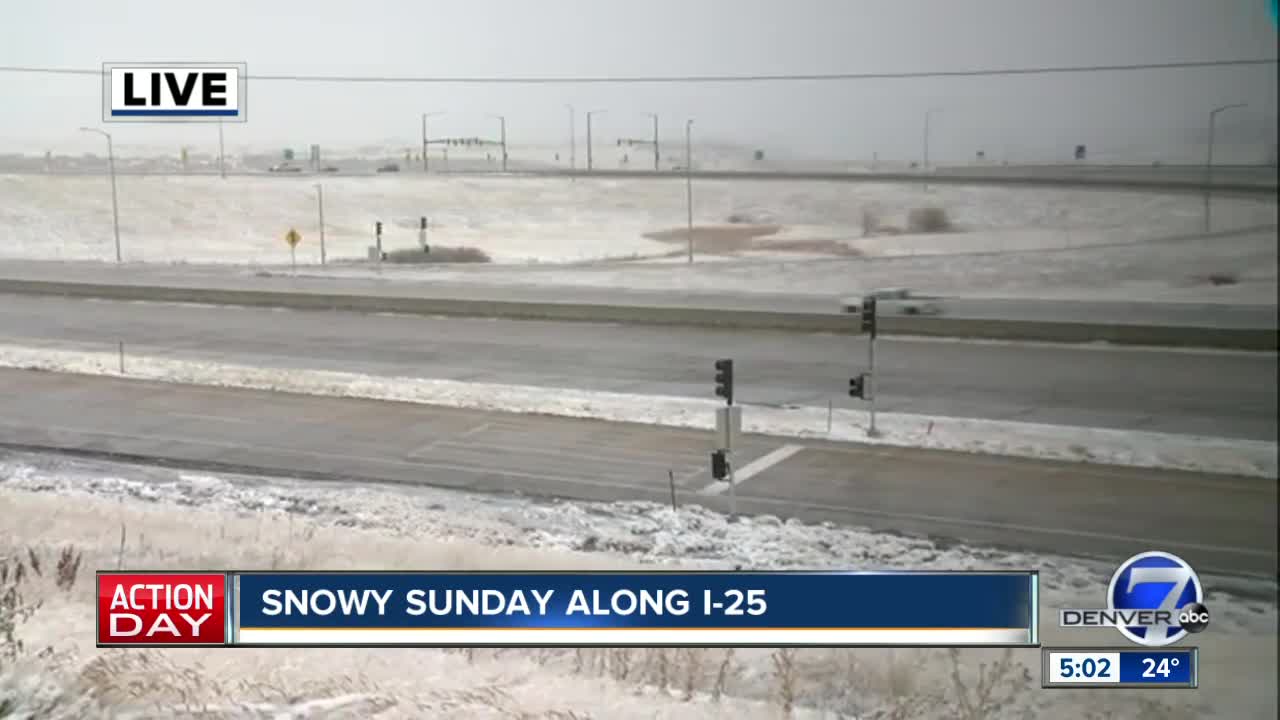 DENVER — Icy conditions and heavy snow is impacting much of the state. Snow bands are moving through the mountains, foothills, and nearby plains and will continue to form through the night, making for a rough commute Monday morning. Up to 6 inches of snow may accumulate by early Monday morning.

Denver7 is tracking the storm's impact, and we will be updating you with the latest information.

Several crashes Sunday evening had led to closed highways in the Denver area and the mountains. Municipalities along the Front Range are on accident alert as crashes and spin outs overwhelm law enforcement. The Colorado Department of Transportation is urging motorists to avoid driving during this long-lasting winter storm, especially on the Interstate 70 Mountain Corridor and Interstate 25 between Monument and Castle Rock. CDOT is advising motorists who have to be out to take it slow, stay safely behind the vehicle ahead, don’t pass plows, and make sure your vehicle is equipped for the weather, including the appropriate tires for snow.

The National Weather Service is warning Colorado drivers that Monday's morning commute isn't going to be pretty. Snow bands are moving through the mountains, foothills, and nearby plains and will continue to form through the night, dumping up to 6 additional inches of snow in Denver by early morning.

CDOT has closed Wadsworth Boulevard in Lakewood between Mississippi and Alameda avenues due to adverse conditions. There is not an estimated time on when it will reopen.

More than 700 flights out of Denver International Airport were delayed Sunday as a winter storm continues impacting the state. DIA officials said crews will be out clearing roadways and runways overnight as the snowfall picks up. Flight delays are possible Monday. DIA recommends that passengers check with their airline to confirm their flight status.

🙌 Big shoutout to the teams working to make sure runways and roadways stay safe during the storm! Thanks for braving the cold to keep things moving #cowx pic.twitter.com/BKuSNagJ2U

The City of Aurora went on accident alert around 8 p.m. Sunday. The status means police will not respond to minor crashes due to an overwhelming amount of calls for service.

5:01 p.m. Hundreds of flights out of DIA delayed

More than 500 flights out of Denver International Airport were delayed Sunday as a cold front moved into Colorado, bringing snow, gusty winds and freezing temperatures. Officials reported at least 41 cancellations out of the airport.

Snowfall will intensify this evening through the overnight hours as a heavier snowband develops from Greeley to Longmont, according to the NWS.

A lighter snow was falling across the Denver metro mid-morning Sunday but the snowfall was expected to stay consistent throughout the day. The snow should pick up in intensity in the afternoon and into the evening hours. A winter weather advisory is expected to go into effect this afternoon.

Delays are still high at Denver International Airport, but the ground stop has been lifted. The FAA is showing that conditions are normal at the airport. Still, about 120 flights were reportedly delayed, though there's been very little snow accumulation at the airport.

Denver International Airport has issued a ground stop for traffic arriving at the airport. Expect delays.

A few issues were popping up on area roads, including some icy conditions along I-25. A car spun out near Castle Pines Parkway and I-25 and several crashes along the interstate between Larkspur and Ridgegate.

Be careful on the roads! This was on I-25 near Castle Pines. Firefighters were responding to a crash when another vehicle spun out behind them. Via CDOT cameras.

Update: several crashes reported on I-25 between Larkspur and Ridgegate. This vehicle crashed into the wall. pic.twitter.com/zdoC9h6YzF

The Colorado Department of Transportation is urging drivers to avoid driving during a long-lasting winter storm that is expected to move into the area Saturday night and into Sunday, making the Monday morning commute along the Front Range and the Denver Metro area a challenge.

The agency is especially concerned about conditions on the Interstate 70 Mountain Corridor and Interstate 25 between Monument and Castle Rock. CDOT is hoping to avoid a repeat of Wednesday when multiple crashes and spinouts on I-70 in the mountains prompted the closure of the corridor for several hours.