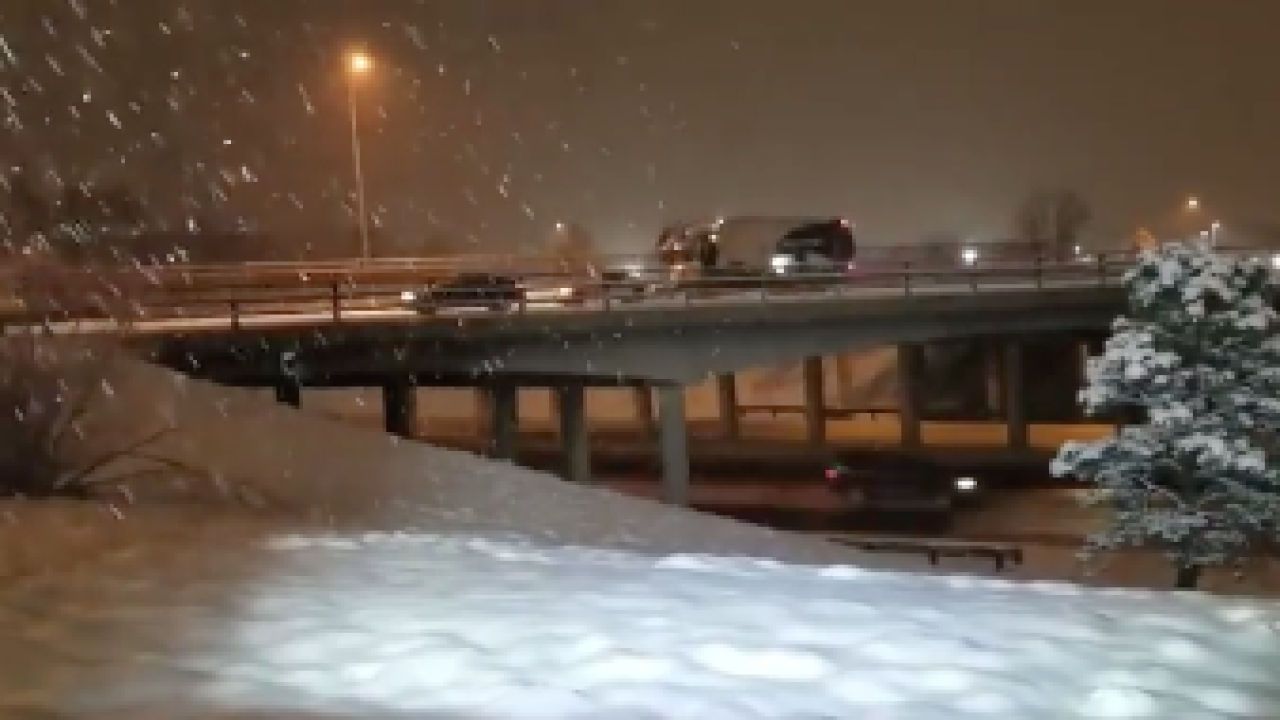 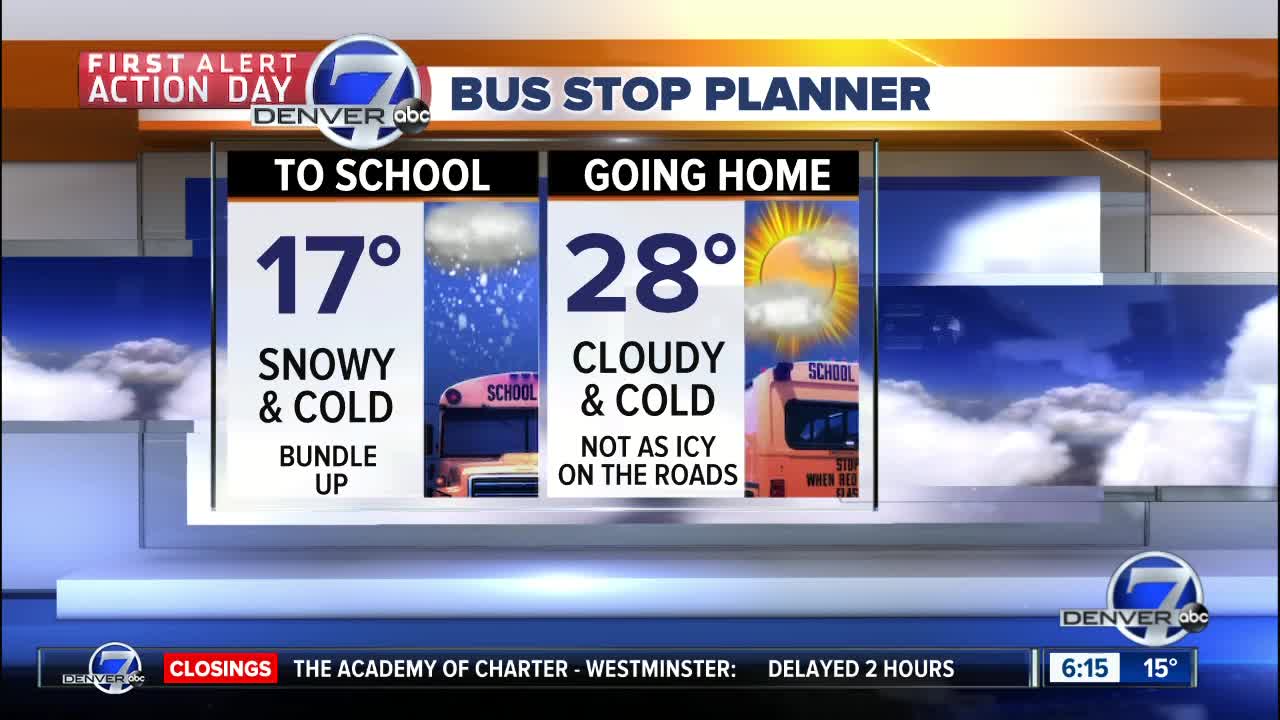 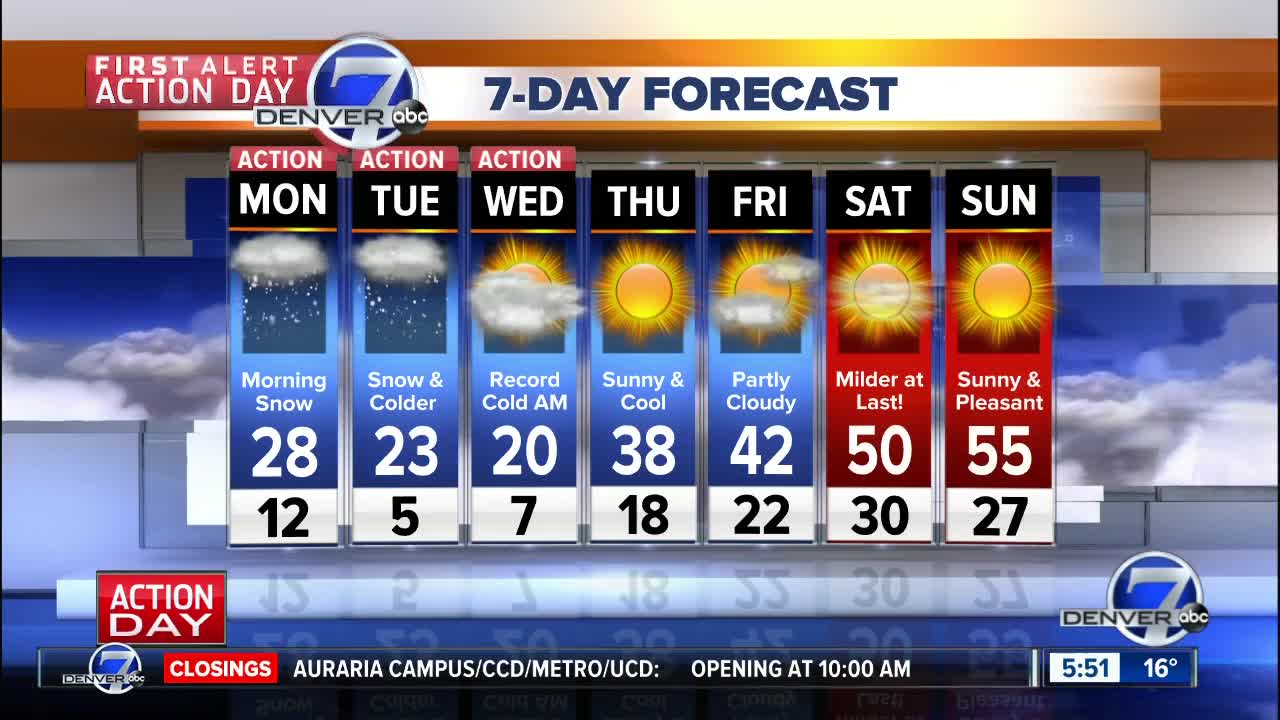 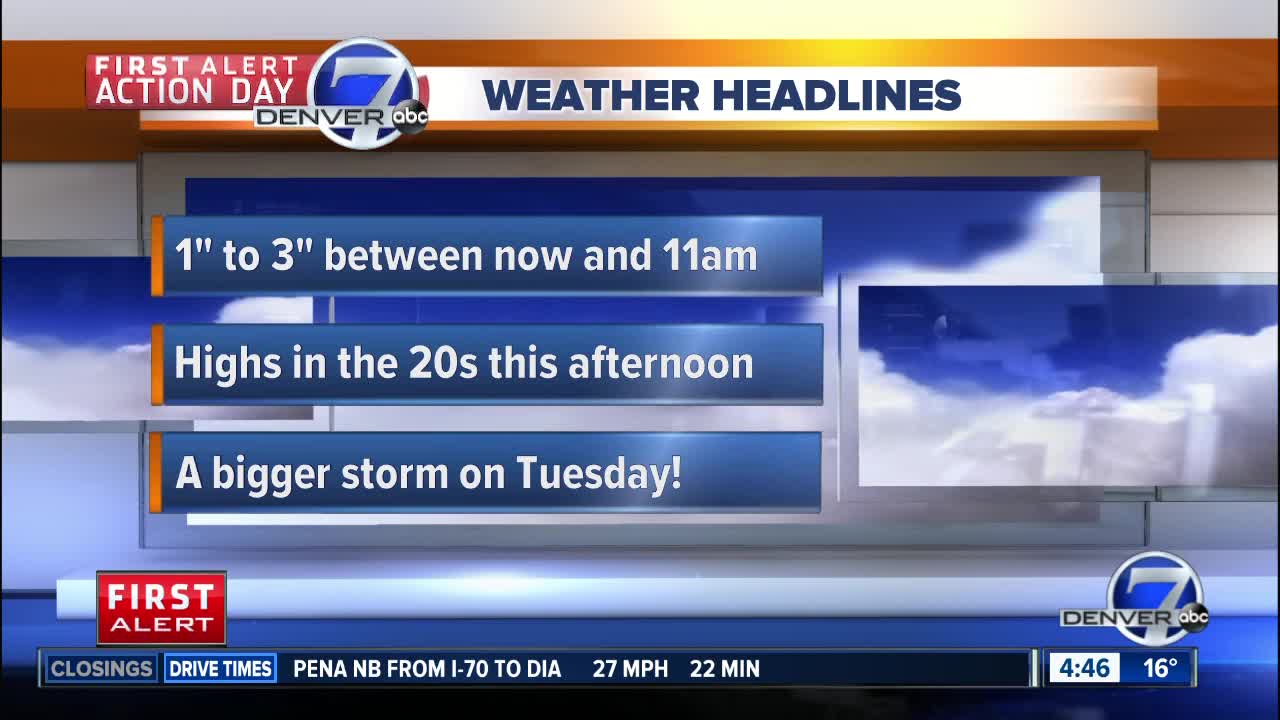 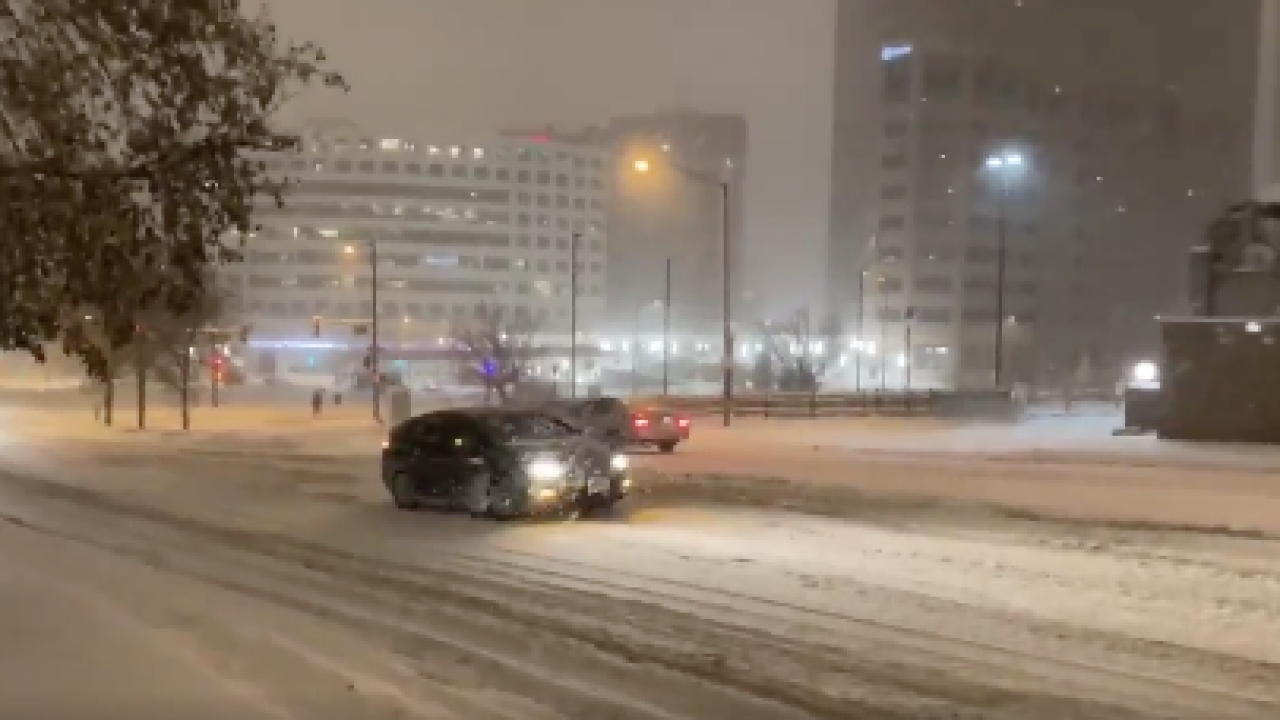 DENVER — Snow is continuing to fall Monday morning around the Front Range. Today will bring an additional inch to 3 inches to the area. We're keeping an eye on road conditions, road closures and delays as they come in as the brunt of the storm hits Monday morning. While the skies are expected to start to clear out by mid-afternoon, another storm will move in Tuesday, bringing an additional 3-6 inches.

1:14 p.m. — If you thought the snow was over after the sun started peeking out from behind the clouds Monday following nearly 24 hours straight of snowfall, you’d be wrong.

Initial forecasts issued Monday call for moderate- to heavy snowfall across much of the state Tuesday afternoon through Wednesday morning – with another 6-12 inches possible along much of the northern Front Range, including Denver and the metro area.

11:10 a.m. — There is a spin-out crash on northbound I-25 before RidgeGate Parkway with several cars in the grass on the right side of the highway.

8:53 a.m. — I-25 is closed in both directions from Monument Hill to Greenland as crews clean up ice in the area.

8:49 a.m. — The multi-car crash on northbound I-25 before Lincoln has blocked the left lanes. Backups go back to RidgeGate Parkway now. Injuries were reported.

8:26 a.m. — There is a crash on northbound I-25 at Auraria Parkway. This area is now closed off while crews work. Take Colfax or Speer as alternatives.

They are still ripping parts of that expansion joint out on the SB 25 to I-70 ramp. The access is still closed. No estimate when it will reopen so exit early at 58th and use Broadway to 48thand then over to I-70 and Pecos. pic.twitter.com/XstteNYMRF

7:45 a.m. — Independence Pass has closed for the season, CDOT announces.

7:30 a.m. — Many cars are struggling to get up some of the hills in downtown Denver, including the eastbound side of Colfax between Lincoln and Grant. If your car is not properly equipped for driving in snow, avoid this hill.

These hills in downtown Denver are tough for some cars with poor tread on the tires. This is the EB side of Colfax going from Lincoln Street to Grant Street. pic.twitter.com/uWbCMp1gVc

6:15 a.m. — The crash in the southbound lanes of I-225 after Parker Road is mostly clear and traffic is starting to move again. A new crash has been reported downtown on southbound I-25 at 38th in the right lanes.

This is a new crash downtown on SB 25 at 38th in the right lanes. pic.twitter.com/qmu3P7n14H

5:42 a.m. — CDOT is asking drivers to delay their morning commutes because roads are "slick and treacherous."

5:12 a.m. — A crash has been reported in the southbound lanes of I-225 after Parker Road. It is backing up traffic, so avoid the area if you can.

More fire trucks heading to this crash on SB 225 after Parker Rd. Stopping is the problem. It is easier right now to get moving that it is to stop. pic.twitter.com/tx1sK7W8GK

5:01 a.m. — Denver Public Schools announced it has moved to a two-hour delay Monday.

4:40 a.m. — Denver Public Schools has announced that all of its schools are open and on a normal schedule. There may be minor delays for some bus routes.

4:40 a.m. — Denver Public Schools has announced that all of its schools are open and on a normal schedule. There may be minor delays for some bus routes.