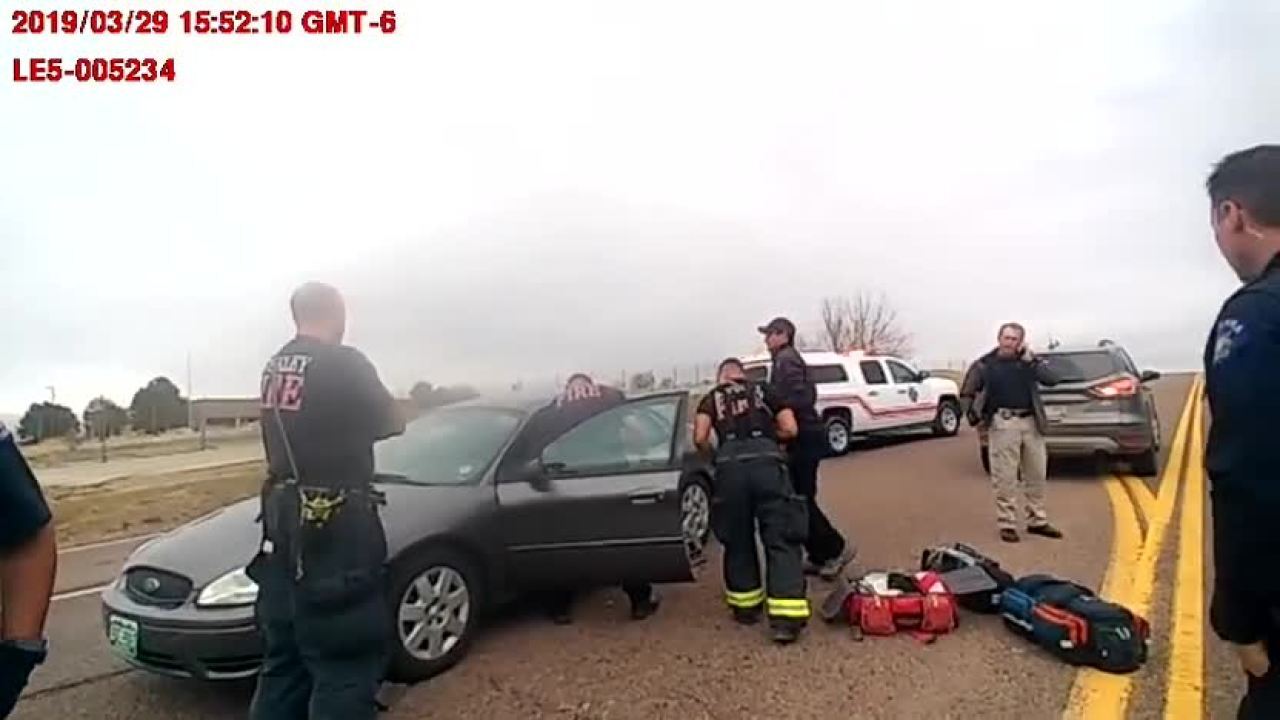 Copyright 2020 Scripps Media, Inc. All rights reserved. This material may not be published, broadcast, rewritten, or redistributed.
Officer Nathan Meier, who was never investigated for driving under the influence, was taken to a hospital after he was found by fellow officers, who reported that they smelled alcohol and talked about possible intoxication at the scene. The officer later admitted to drinking vodka that day while on duty. 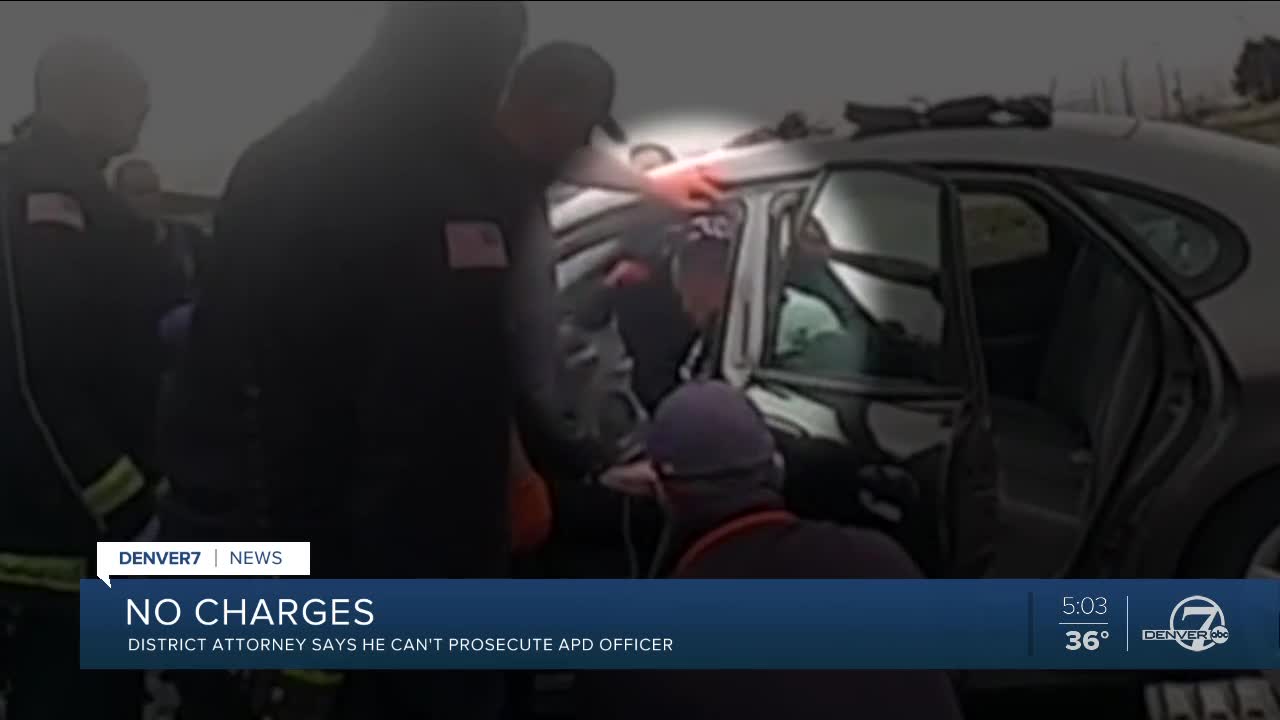 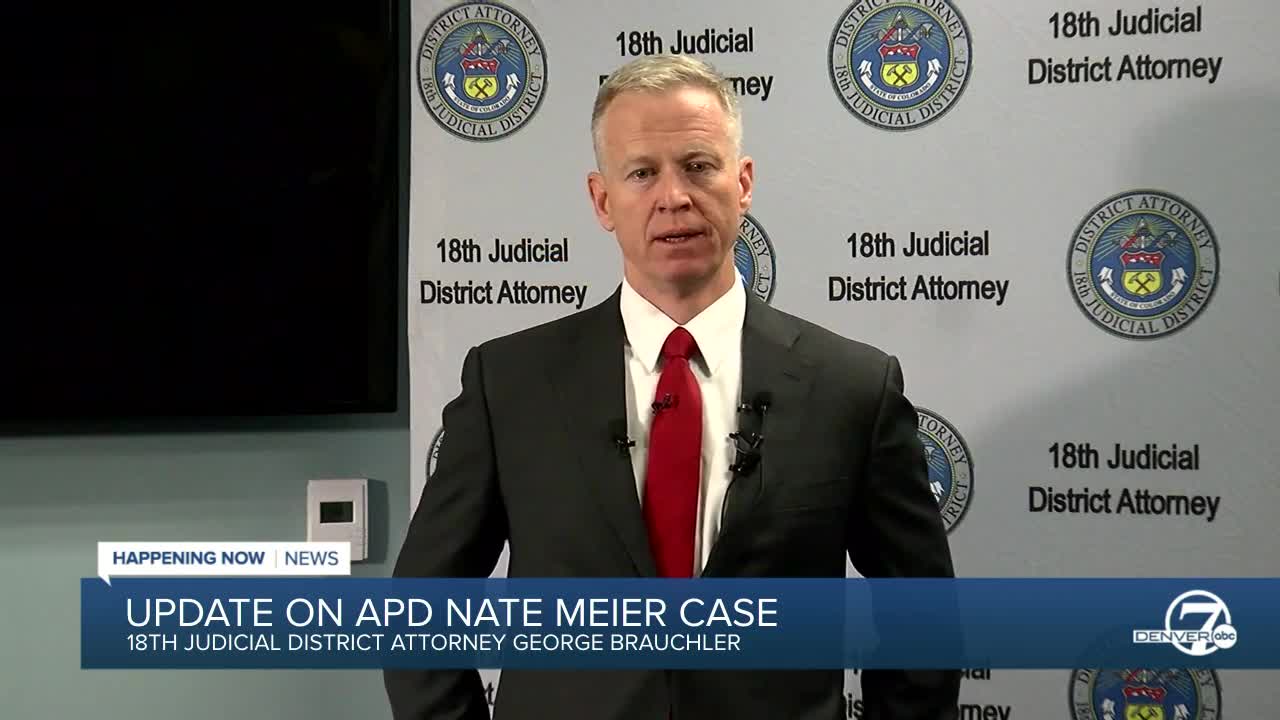 AURORA, Colo. – The Aurora police officer who was found passed out drunk at the wheel of his patrol car while he was on duty last March will not face DUI charges – or any others at the moment – in the case because prosecutors feel they do not have enough evidence to prosecute him for driving under the influence.

18th Judicial District Attorney George Brauchler announced at a Thursday morning news conference that he would not be pursuing DUI charges against Aurora Police Department Officer Nate Meier, saying he did not feel he had a probability or likelihood at trial of convincing a jury to convict Meier on the charge because he and his team of prosecutors would not be able to present certain evidence in the case.

Brauchler said that a series of decisions at the scene that day involving Meier’s fellow Aurora officers and some APD higher-ups that led to Meier’s blood not being drawn that day, and the Garrity rights that Meier is owed under the law protecting his compelled testimony to internal affairs investigators, led to his decision.

“I’m frustrated,” Brauchler said. “If one of us had been in the car, I think it would have been treated differently.”

Officer Meier was found passed out behind the wheel of his patrol car in the middle of the road while he was in uniform and armed with his service weapon outside Buckley Air Force Base at 3:44 p.m. on March 29 of last year. But he was never investigated for DUI, and the incident did not come to light until media reports late last year.

On Thursday, Brauchler said he was never told about the incident by anyone until a reporter came to interview him about the case early last December – an interview that broke the news open and led to additional reporting, which eventually led to the announced retirement of the department’s deputy chief, Paul O’Keefe, and his withdrawal from consideration as interim chief. A new interim chief, Vanessa Wilson, has since been appointed and has vowed to regain the trust in the community after a myriad of issues and incidents over the past couple of years.

Later Thursday, an Aurora Police Department spokesperson confirmed to Denver7 that O'Keefe would retire on Friday rather than on March 31 as he originally had announced.

Wilson, in response to Brauchler's comments on the case Thursday, acknowledged the department's "huge mistake" in the incident.

"No one is above the law, and this should have been handled as a DUI," Wilson told Denver7. "We know now that we dropped the ball and did this wrong."

Brauchler tells saga of what happened that day

Brauchler detailed exactly what he and his investigators have uncovered in how Aurora police handled Meier’s intoxication that day, and the roadblocks he says keep him from charging and prosecuting Meier for DUI.

O’Keefe was the first one to respond two dispatch calls reporting an officer passed out in his car in the middle of the road that day last March, Brauchler said. One of the callers, a former bartender, said Meier “looked drunk” when she called in the incident.

O’Keefe could not get into Meier’s vehicle, and firefighters and EMS responders from multiple agencies had to break open his vehicle’s windows to get inside.

Brauchler showed Thursday, citing internal affairs reports, that O’Keefe originally said that he smelled a mild odor of alcohol, but once he left the vehicle, he would go back and say nothing about ever smelling alcohol on Meier or inside his vehicle – though Brauchler said that O’Keefe also called then-Chief Nick Metz at the time and said that Meier “might be intoxicated.”

Brauchler said O’Keefe “erred on the side of protecting Officer Meier.”

But Brauchler said that none of those observations were ever reported to the EMS personnel, which he said played a “significant role” in what happened next in the case and what would lead to Brauchler’s announcement Thursday.

Five of the eight police officers on-scene that day had body-worn cameras, and one of them did not turn theirs on, claiming it had battery issues. Of the four whose body cameras did capture video, Brauchler said because of “turning on and off,” investigators were only able to obtain a total of 16 minutes and 20 seconds of video from the four cameras.

But in one of those videos, a lieutenant at the scene is seen walking by the officer wearing the camera and saying, “He’s a little intoxicated,” Brauchler said. Another officer would tell internal investigators he believed he smelled alcohol on Meier.

But Brauchler said that since none of the information from police about Meier possibly being drunk was ever relayed to EMS crews, and they did not personally smell alcohol, they worked to figure out why he was unconscious and what medical issue he might have been dealing with.

Brauchler said that one of the firefighters said during his office’s investigation that he was “shocked” to see news reports that Meier’s lack of consciousness was due to intoxication, which Brauchler said would not work well for prosecutors at the trial.

Meier was eventually transported to a hospital, but the DUI officer that was originally dispatched to the hospital by Aurora police was waived off and told they had “nothing to do” there, Brauchler said. He said that “senior people” made the decision to waive off that DUI officer and that his investigative team determined that the request came from a traffic commander or possibly even higher up.

Further, Brauchler said, APD made no effort to seize a water bottle with clear liquid and test its contents as would typically be the case if a civilian had been found passed out behind the wheel of their running vehicle.

Meier talks to internal affairs, but Brauchler says he can’t use that testimony

A blood test of some sort was apparently taken, according to the internal affairs report, which showed Meier had a BAC of .430 – more than five times the legal limit. Meier would also admit to internal affairs investigators, in addition to what his BAC was, that he had gone home and drank vodka that day while he was on duty.

But the fact that Meier only admitted those things to internal affairs investigators with the department is precisely why Brauchler said he and his office cannot prosecute the case.

Bruachler assigned one of his chief deputy DA’s solely to investigate Garrity rights in this case. Those rights protect a person from being compelled by the government to be a witness against themselves, and applies to the Fifth Amendment, but is focused on internal affairs investigations.

"I share the frustrations of everyone involved, including the district attorney," Wilson said.

Those things combined, Brauchler said, meant that since no blood tests were taken at the request of law enforcement, and since the testimony of the people who did not talk to internal affairs investigators was inconsistent as to whether or not Meier was intoxicated, it created a tough case for prosecutors.

He said since he didn’t have an admission or BAC outside of the internal affairs investigation, and since the Garrity rights protected that information and could be used to toss the case if prosecutors tried to bring it in as evidence, he did not feel he had a reasonable probability of success at a trial.

“Aurora’s failure to make the initial inquiry [for a blood draw] and to hear back from doctors precludes us from doing so,” Brauchler said in regards to his office’s ability to try to subpoena records.

Brauchler said the “single reason” that DUI, DWAI or being in possession of a firearm while intoxicated charges could not be brought was because an “investigation was not conducted in this case.”

“I don’t think it’s a coverup, but it’s a couple blocks from it.”

Despite his not bringing charges at this time, Brauchler said he was not ruling out pursuing a misdemeanor charge of official misconduct should more evidence come forward but said he did not have enough evidence at this time.

Brauchler said Thursday he felt “incredibly frustrated” with the Aurora Police Department, which he works with often as Aurora is part of the 18th Judicial District, and said the ordeal was “embarrassing” for most APD officers, the majority of whom he called “some of the finest law enforcement officers in this part of the country.” But he also said that two of the officers who wrote reports about the Meier incident but who did not talk to internal affairs told him mostly, “I don’t know; I don’t remember.”

He said he felt the handling of Meier’s case by APD is “an aberration,” however.

He stopped short of calling the department’s actions a coverup, saying he believed that officers were thinking that day that “ignorance is bliss” or “we don’t want to know.”

“I don’t think it’s a coverup, but it’s a couple blocks from it,” Brauchler said.

He said he was giving the benefit of the doubt that this was a one-off case, responding, “Boy, I sure hope that’s not true,” when asked if he believed there are any other similar cases the department has swept under the rug.

And he pushed off theoretical claims that his office was not prosecuting officers – noting his office has prosecuted 12 DUI cases involving officers and gotten convictions or pleas in eight of them.

He said he was “desperate” to find a way to move forward with charges in the case because he “thought it would be the right thing to do,” but said his deputies told him: “This would be the weakest DUI we would ever move forward.”

The city has hired outside counsel to review what happened internally within the police department on the case, which Brauchler said would lead to answers about who else should be held accountable. Brauchler reiterated at the end of his news conference that he would have charged Meier if he could have obtained his blood alcohol content.

“I’m not defending him because I do think he beat the system,” Brauchler said. “I think the system helped him do it.”

Aurora City Manager Jim Twombly said in a written statement Thursday afternoon that he agreed with Brauchler’s assessment of the city and department.

“We appreciate District Attorney Brauchler’s review and agree with his assessment: We got it wrong,” Twombly said.

“There were questionable decisions made at the scene that failed our residents, failed our many hard-working police officers, and failed our city. This incident falls far short of the standards of accountability and integrity we expect of all city employees and has jeopardized our strong relationship with our residents. But that relationship is not irrevocably broken,” he added.

He called Brauchler’s findings in the case “just one piece of the puzzle” as the city figures out “what went wrong and how we can move forward and learn from mistakes and take action to restore community trust.”

“That’s why I commissioned former U.S. Attorney John Walsh to conduct an independent review on this matter regarding the management, policies and procedures involved,” Twombly said. “We are eager to see the report and the recommendations he will make. In the meantime, under the leadership of Interim Chief of Police Vanessa Wilson, we are already implementing new policies to help the residents of Aurora and our police officers feel that our city and our leadership are headed in the right direction.”