Officials ask people not to no-show on callbacks, state starts borrowing from feds 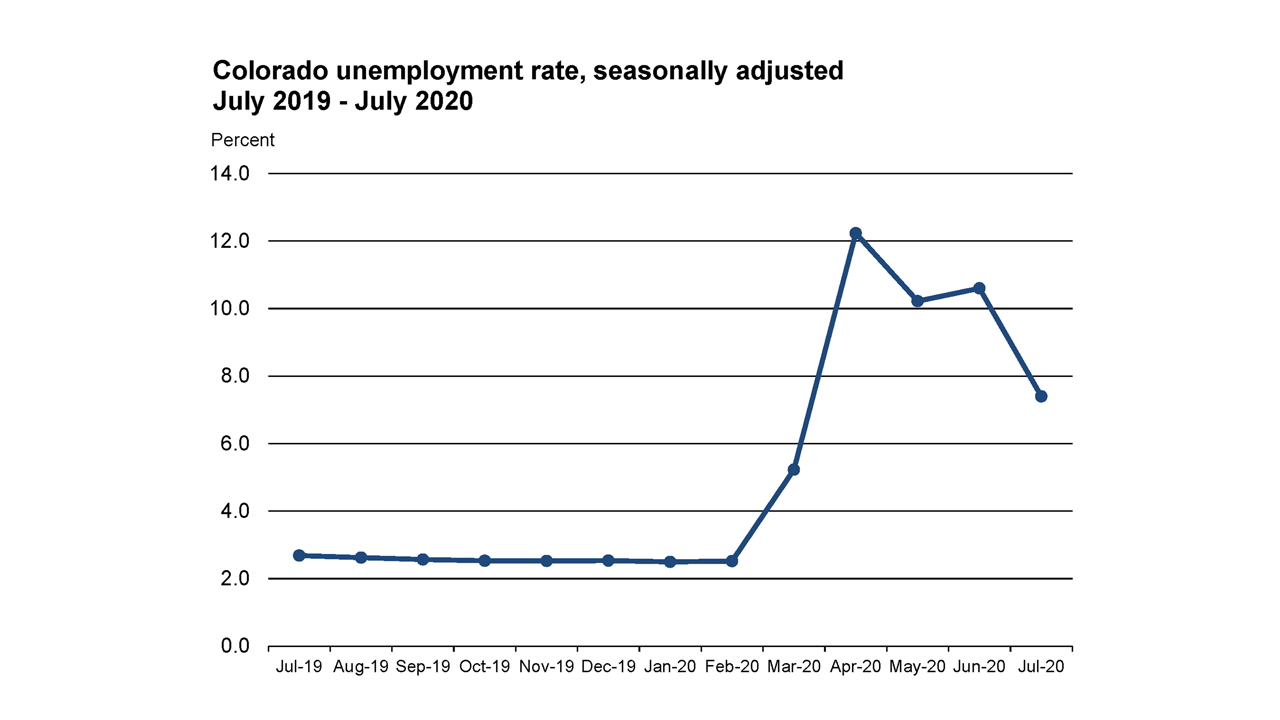 DENVER – Colorado’s seasonally adjusted unemployment rate fell to 7.4% in July – down from the adjusted 10.6% it was at in June, which was the third-largest drop month over month in the nation, Colorado Department of Labor and Employment officials said Friday.

That data is according to a survey of households done in mid-July – which also found that the state’s labor force decreased by 97,500 in July, but that the number of people employed increased by 11,100 to 2,851,300 people, which is about 61.7% of the states working-age population.

That employment-to-population ratio is better than April’s 58.3% rate but still far below February’s 67.7% ratio.

The CDLE says Colorado has since May gained back about 29% of the 342,000 nonfarm payroll jobs lost between February and April. Officials said they expected to see “a lot of churn” in the month-to-month reports on the state labor force and job gains.

Some of the private-sector industries that had seen a large number of job losses due to the pandemic and business restrictions gained some jobs back in July.

Leisure and hospitality – primarily hotel and restaurant workers – gained 11,800 jobs last month, and trade, transportation and utilities gained back around 6,800 jobs, according to the CDLE, and there were no significant declines in jobs in any industry.

CDLE Senior Economist Ryan Gedney said the state started borrowing money from the federal government this week after the trust fund went insolvent in order to continue paying regular unemployment benefits. As of Thursday, the state had borrowed just under $26 million, which is interest-free through the end of the year.

Gedney said that the department expected to bring in about $150 million in contributions from employers toward the trust fund in the third and fourth quarters, through next March. If the state pays out an average of $50 million in weekly benefits (it paid out $68.7 million last week) over that time frame, Gedney estimated the state would need to borrow around $1.4 billion.

CDLE Deputy Executive Director Cher Haavind said the virtual agent has now had more than 500,000 user sessions and was delivering an accuracy rate of responses of 87%-92% over the phone and web, with the web-based option being more accurate.

She and other officials said it was critical for people who have signed up for callback slots to cancel them if the virtual tool can answer their questions, as CDLE workers are seeing a 25% now show rate for callback slots. She said there were 3,700 slots that had opened up between Sept. 21 and Oct. 2 as claimants’ questions are answered and with new staffing for the number of agents who can conduct callbacks.

Haavind and Unemployment Insurance Division Chief Jeff Fitzgerald said the department was deploying a new campaign Friday to contact people scheduled for callbacks who don’t need to speak to an agent and should be able to use the virtual tool to address their needs through some upgrades.

Haavind said that the department stopped $17 million so far this month in fraud payments from growing out, and $52 million during the pandemic. She said Colorado was among the top five states in terms of paying claimants on time and that about 80% of claims filed have been paid out.

She also reiterated that the state had received approval for the Lost Wages Assistance program – initially for three weeks. But she said that the state was continuing to seek guidance from FEMA on how to apply for further weeks.