Lack of faith: Women raped by Colorado priest call for accountability from Archdiocese of Denver 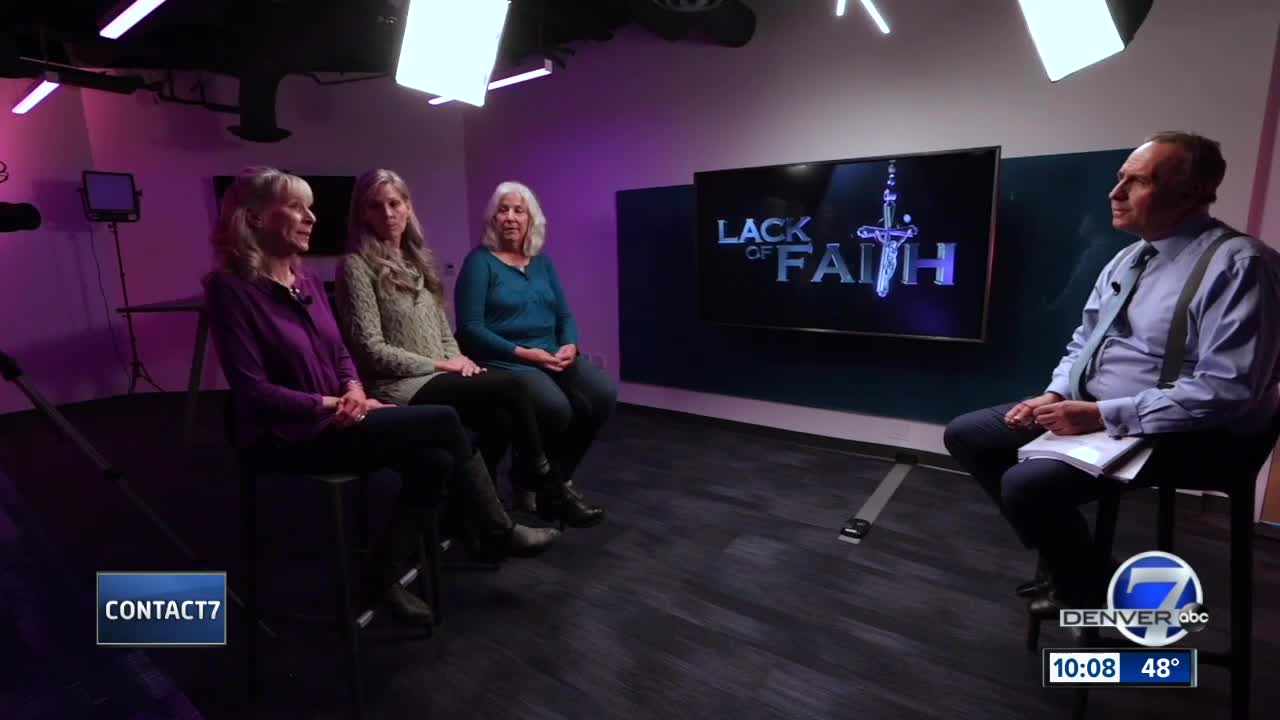 DENVER – Three sisters of the Catholic Church are breaking their silence, accusing a Colorado priest of violating their childhood, in the hope their confession will inspire others to come forward.

Their message doesn’t stop there. A significant part of their motivation is holding the Archdiocese of Denver accountable for what they say was an overt cover-up that last more than five decades.

Cate Stover, Carol Clear and Marcia Stover decided to speak about the painful memories they’ve kept inside since they were little girls, following a special investigation into Colorado’s Catholic Church that found at least 166 children were sexually abused by 43 priests since the 1950s.

Their report cards and grade school picture show memories of their days of Catholic school at St. John’s in Loveland. But behind those faces, the sisters kept secret the abuse they endured by someone they thought they could trust.

“I remember him coming to the classroom and selecting me… pulling me up,” said Clear. “I recall vividly being in a bathroom stall of the girl’s restroom at school and Father White in the stall with me... I was huddled in the corner and he forced me to have oral sex.”

Father Robert White was described in this report as “the most prolific known clergy child sex abuser in Colorado history.”

“The priest is standing… I am 10… he’s looking down at me. I am doing what I am told. He takes me up to the rectory… takes me downstairs and he rapes me,” Stover recounts.

“I know for a fact – I’m not listed in there and I should be,” said Clear, mentioning the state’s report of 63 confirmed victims of Father White. “They know about me and the abuse of Father White when I was at school.”

In fact, the special master’s recently released report, which graphically details Father White’s trail of terror – molestations that continued for 21 years at six different parishes – does not include any of the three sisters.

“They had a list of kids he had abused that the diocese knew about, and it’s documented in letters back and forth,” said Clear.

The letters provide disturbing proof of the cover-up by the Archdiocese.

One of those letters, from 1963, reads, “Father (White) must leave parish immediately because of the wide knowledge of his offenses in St. Catherine’s Parish and Holy Family School.”

Another, from 1965, reads as follows: “Because of boy troubles I felt it best to get Father Robert White out of Colorado Springs immediately.”

“He was moved at least eleven times in 33 years,” said Stover. “He would only last two or three years in a parish before they were worried that parents were going to talk or there would be a scandal.”

A letter from 1961 reads, “I questioned… as to possibility of scandal, and he is satisfied… there is no danger.”

Perhaps most disturbing for the three sisters is a 1968 letter about Father White at St. Anthony’s in Sterling – a letter that includes, “the parish would be better off without Father White,” and which concludes, “Father White should not be assigned to a parish where he will be involved with a school.”

It would only take eight days for another letter to inform Father White he would be transferred to St. John’s in Loveland.

“That letter in Sterling warned he shouldn’t be around kids… and yet they sent him to a school where we were and he abused us… they could have stopped that, absolutely,” said Clear.

The special master’s report strongly criticized Denver’s Archdiocese for its handling of Father White, stating the Archdiocese, “never did a thorough and independent investigation… never voluntarily reported him to police… was frequently dishonest with his victims…” and concludes Father White’s file, “reveals that broad, deep and permanent harm to children was the consequence.”
The Archdiocese of Denver finally removed Father White in 1993 after he terrorized children for more than three decades. He died in 2006.

In 2015, after mediation, Clear and the diocese agreed on a financial settlement. The Stover sisters have recently filed claims against the church. All three say any money will never heal the lifelong pain caused by Father White.

The archdiocese released this statement last month following the release of the report from U.S. Attorney Robert Troyer:

“Sexual abuse is a societal problem and there is no single answer or single action to eliminate all sexual abuse, but we will not rest in our efforts to protect children. We will use our resources and community partnerships to be a leader in this area, and we will strive to improve. For a full list of my promises to you, and for additional information about the report, please visit archden.org/promise,” Aquila said in the statement. “Please join me in praying for all survivors, their families, and our communities, and for our ongoing efforts to bring healing and reconciliation to the survivors of sexual abuse.”