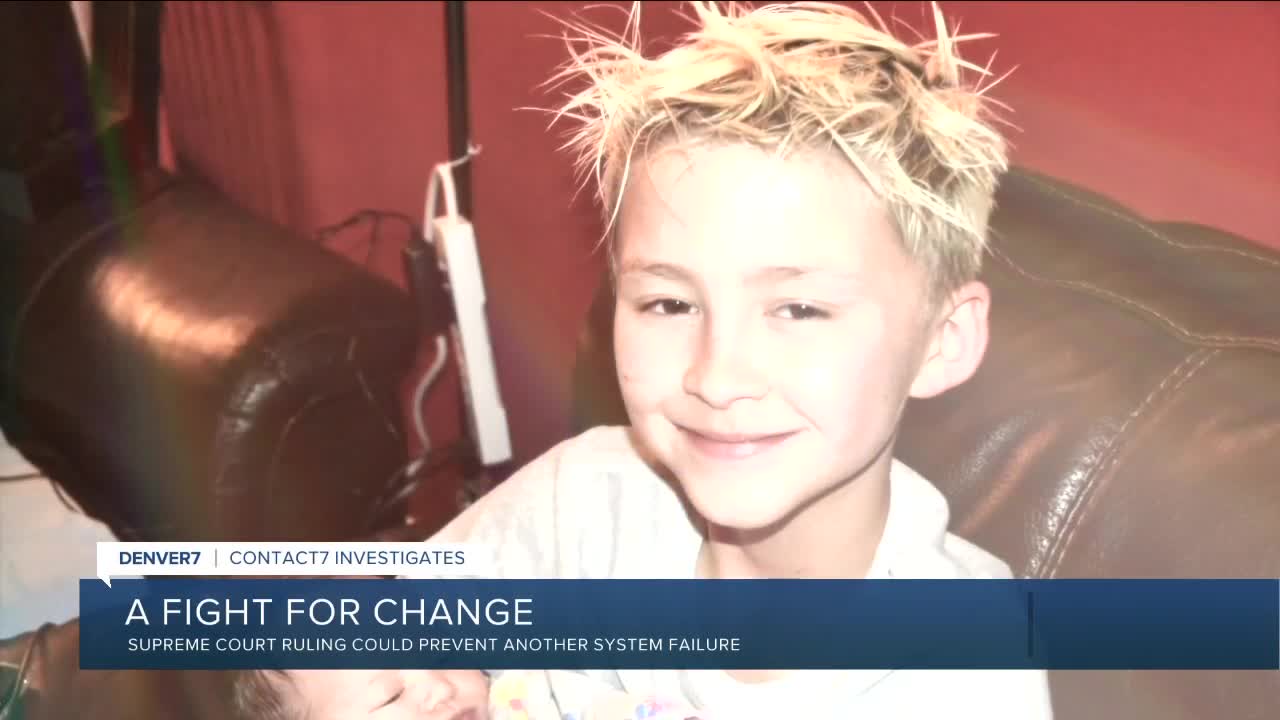 DENVER — A recent Colorado Supreme Court ruling could make it easier for parents in custody disputes to obtain custody hearings in a quicker fashion – something that was at the core of the case involving Jing Tesoriero and her young son, who was killed in a murder-suicide last year by his father and Jing’s ex-husband.

It has been nearly 10 months since Jing Tesoriero’s 10-year-old son, Ty, was killed following a custody hearing in which his father learned he would lose custody of the boy.

The incident still haunts Jing and the Lone Tree community, but she sees some hope — in a Colorado Supreme Court ruling — that other families will be spared from the same grief.

“I'm hoping people can use Ty's incident as an example to prove our system is not perfect,” Jing told Denver7 Investigates.

A law firm that includes Jing’s attorney, Fourth Street Law, filed an appeal earlier this year to the Colorado Supreme Court in another custody case and the ruling should allow for hearings to occur much sooner than they did in Ty’s case.

In the case decided by the Supreme Court, much like with Jing and Ty, the district court kept denying motions to restrict parenting time — a request, which if granted, requires a court hearing be held within 14 days. The motions are meant to protect children when there are allegations of imminent or emotional danger.

In the case similar to Ty’s, the Supreme Court ruled the district court made a mistake in not holding a hearing. Further, it made changes to the way courts have to look at these motions going forward, making it much harder to deny a motion.

At the center of both cases was parent alienation — one parent keeping a child from another parent — which is now considered a form of child abuse thanks to the ruling in the case, which was handed down in June.

Jing’s attorney, Caroline Cooley, said that alienation has been an ongoing issue for family law attorneys across the state.

Cooley’s appeal mentioned Denver7’s reporting and Ty’s case: “Father’s counsel represented a mother who filed two separate motions to restrict the father’s parenting time based on parental alienation. The trial court denied both motions on their face. The father ultimately murdered the child.”

“Had our previous two motions … had one of them been granted, the case would have taken a very different direction,” Cooley said.

Ty’s murder happened hours after a contentious court hearing in which his father learned that he was going to lose custody of Ty. The judge, however, let him take his son home for one last night.

But that hearing came after Jing spent 15 months trying to get her day in court. Cooley believes that had a ruling like the Supreme Court’s come earlier, the situation would have had a different outcome.

“I do believe that Ty would still be alive today,” Cooley said. “We have talked about that.”

After Ty’s murder, Cooley vowed to Jing that she would not stop fighting for her son after she saw the system fail them.

“I am not going to let this go,” Cooley said. “The best interest of the child is always what we’re fighting and advocating for. And what happened to (Ty) was preventable.”

She said the new rules will help parents who can show alienation and particularity in a custody case.

“The new court ruling is, if you state your allegations with particularity, the court is required to give you a hearing within 14 days. It does not leave a gray area,” Cooley said.

Particularity means that if you have an expert saying there is a danger to a child, it meets the standard for a hearing.

“It’s groundbreaking,” Cooley said. “We always say you can’t cross examine a piece of paper. And that’s what the Supreme Court said — that is now the rule of law.”

For Jing, she hopes the ruling can prevent further heartbreak for Colorado families.

“It’s a good start for the local judges to see that alienation is abuse and the abuse should be addressed,” she said. “I’m hoping that my story won’t be forgotten.”