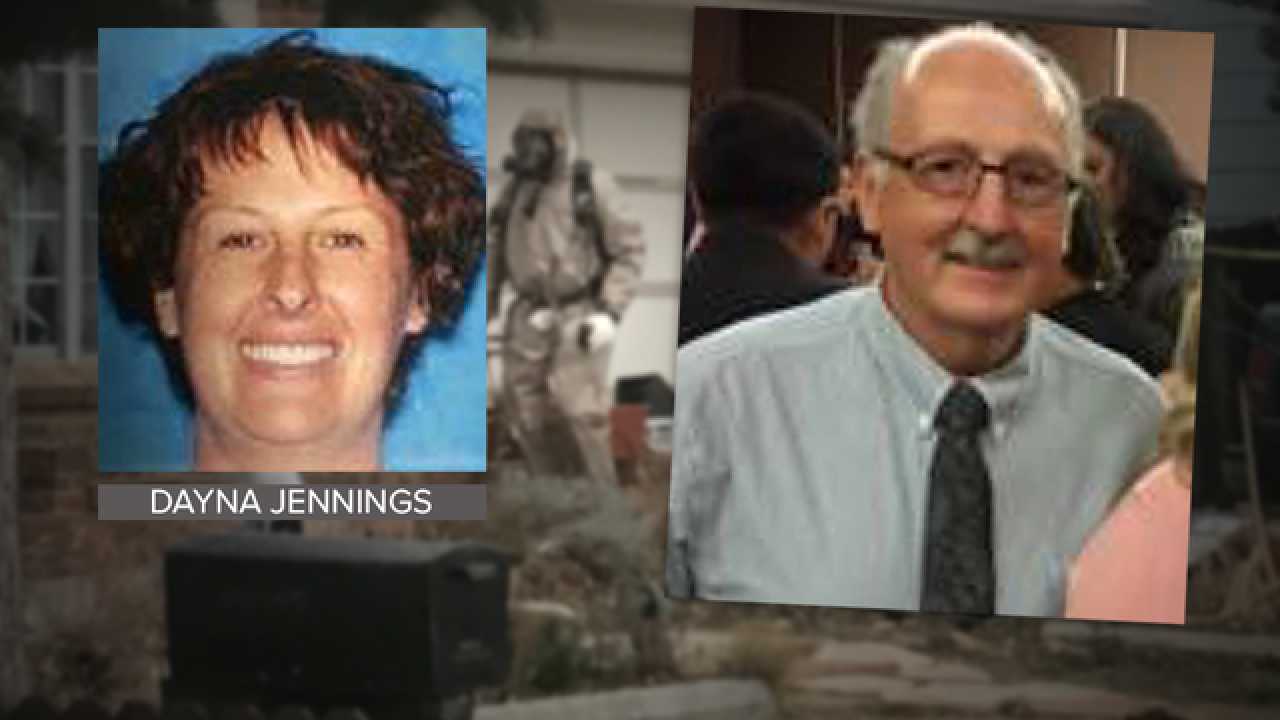 The remains of the missing 69-year-old Federal Heights man, William Mussack, were found encased in concrete inside the basement of his home January 10.

Mussack’s daughter, Dayna Jennings, 44, was arrested and charged with his murder. She appeared Tuesday in an Adams County court, where she was formally charged.

According to the affidavit, the last known contact Mussack had with anyone was on Dec. 9. The document details signs of foul play and inconsistent stories weeks before Federal Heights Police descended on the home.

It also reveals a daughter struggling with a failing massage business and relationship issues with a former husband.

Details considered suspicious by police highlighted in the affidavit were dumpsters ordered by Jennings and delivered to her home on Dec. 11. Police noted Jennings had ripped out flooring and carpet from the home’s basement and placed the debris in the dumpsters, which were removed days later.

Another disturbing entry in the affidavit details an episode where Mussack told his son in a text message he felt drugged after receiving a back rub from Jennings on Dec. 7. He told his son he fell asleep for 15 hours in a recliner shortly after the encounter. He ceased communicating with anyone days after, the document details.

According to an affidavit, the investigation began when Mussack’s brother contacted Federal Heights Police on Dec. 28, stating he had not heard from Mussack since Dec. 5. It was a concern other family members would later share with police.

After the brother’s call, police paid a visit to the home at 10022 Eliot Circle and talked to the suspect. Jennings told police her dad “doesn’t live here.”

Additionally, she told them Mussack lost his phone, but it was later found and is being held, along with his mail, at the home, according to the affidavit.

Days later, police made a second visit to the Eliot Circle home and went inside to talk with Jennings. During that visit, police said she told them she had not seen her father for several weeks after he had left for the mountains with his girlfriend.

Police noted in the affidavit that the home smelled like “sewage and something rotten,” and Mussack’s room appeared to have been unused for weeks.

On Dec. 29, police made another visit to the home. However, Jennings refused to allow officers in the home, the document read. Officers noted construction type materials piled in the home’s driveway, observed the day before, had been removed.

Police talked to several people during the investigation, including Mussack’s girlfriend, who told them she last saw the 69-year-old man during a Dec. 2 trip the two took to the San Luis Valley. They returned to the Denver area that evening, and Mussack dropped his girlfriend off at Craig Hospital, where she is employed.

On Dec. 8, she sent a text to him about attending a Christmas party the next day and got a response, but Mussuck did not show to the party and made no further contact with her.

Jennings gave several inconsistent stories to family and investigators concerning the whereabouts of her father during the investigation, police said in the affidavit. At one time, she told police that he was in Arizona “enjoying the sun.”

The document reveals Jennings made claims of abuse by her father, an allegation family members denied. Others were surprised to hear about the allegations, stating Jennings told them she “adored her father… because he was the only person who loved her unconditionally.”

She was also described as having borderline personality disorder by an ex-husband, whom Jennings had a child with. He also told police that Jennings was having financial troubles after her massage business closed in November.

The affidavit stops short of giving a clear answer as to how Mussack met his demise. It's not clear in what condition Mussack’s remains were at the time they were discovered in the home's basement. Members of the Adams County Coroner’s Office were seen wearing masks and hazmat protection as they entered the home.

The cause and manner of Mussack’s death are still under investigation.

Jennings is being charged with first-degree murder in the death of her father. Prosecutors are also charging her with a felony count of tampering with a deceased body. Jennings could face the death penalty if she is convicted. She remains in the Adams County Jail.