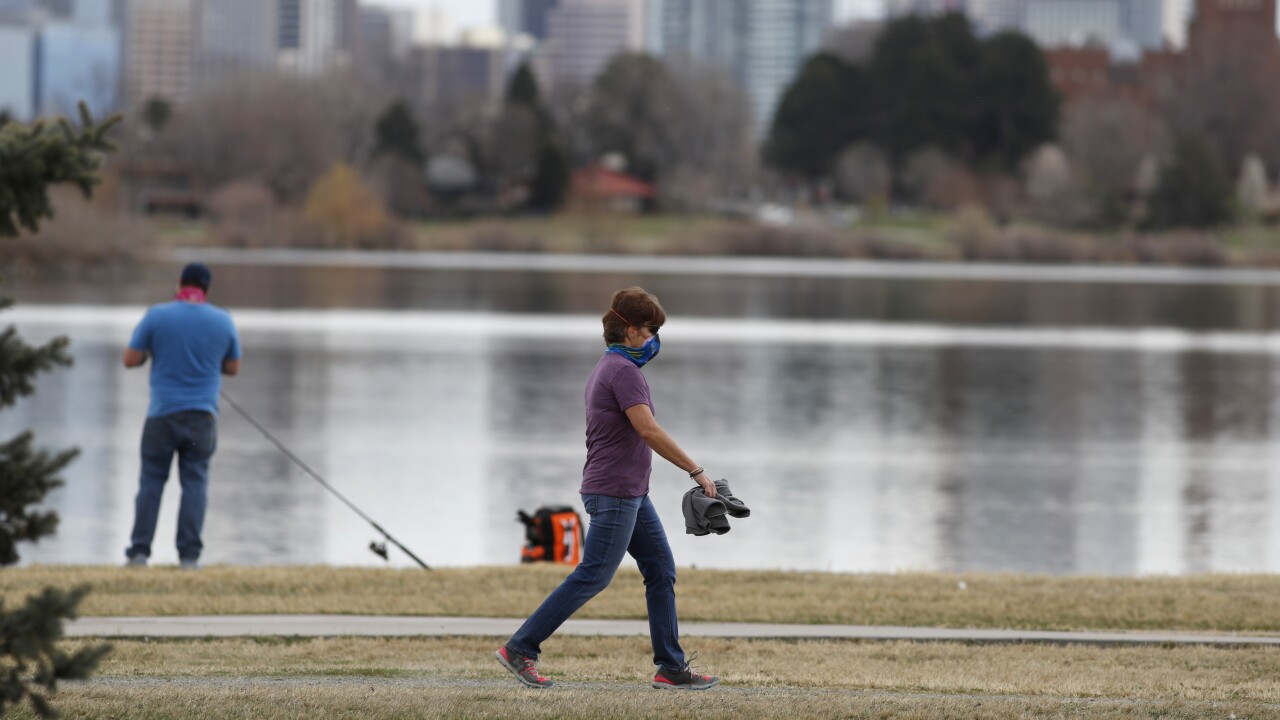 (Copyright 2020 The Associated Press. All rights reserved. This material may not be published, broadcast, rewritten or redistributed.)
David Zalubowski/AP
A pedestrian wears a mask while walking a path around Sloan's Lake, Friday, April 10, 2020, in Denver amid the coronavirus outbreak. (AP Photo/David Zalubowski) 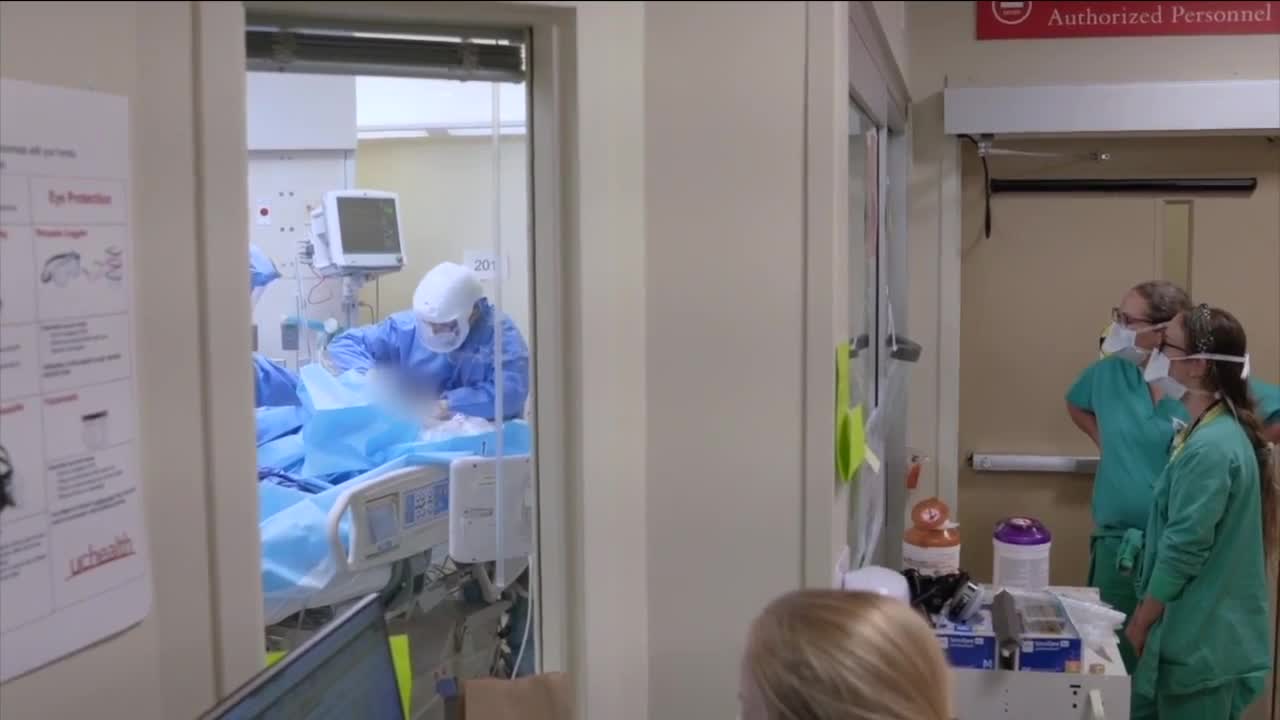 DENVER – Colorado is seeing a slower rise in the number of COVID-19 cases and possibly a plateau, state public health officials said Tuesday, though they said the next few weeks would be key in determining what steps have to be taken next before any physical distancing measures are lifted or any ramp-up planning is rolled back.

Colorado Department of Public Health and Environment State Epidemiologist Dr. Rachel Herlihy said that the next couple of days should show state officials whether the stay-at-home order – which went into effect March 26 across the state – has led to enough reduction in person-to-person contact to start to cause the number of reported new cases each day to decrease.

“We’re just really starting to observe the impact of the stay-at-home order in the case count today and the next couple of days,” Herlihy said.

As of Monday afternoon, there were 7,691 confirmed cases in Colorado; 1,493 people had been hospitalized and 308 people had died.

Colorado’s COVID-19 Incident Commander Scott Bookman said the state was working closely with the Colorado School of Public Health and University of Colorado modeling teams to see when a partial lifting of the stay-at-home order could be lifted and what other strategies could be put in place in the months ahead in order to achieve the main goal of officials: pushing the peak of the virus back far enough so hospitals and the state can prepare enough beds and personnel to handle the surge.

Bookman said officials were now planning on the peak hitting in “May or later” depending on what levels of social distancing have been achieved.

The state said Monday it hoped to begin releasing hospital discharge data this week. Bookman said Tuesday the CDPHE was working with hospitals to get better information on discharges, and Herlihy said the state was working with those same hospitals and exploring other avenues to get more demographic case data as well. An initial release of demographic data from about 75% of cases showed disparities among Hispanic, African American and Native Hawaiian/Pacific Islander Coloradans.

Despite the somewhat-positive current data on statewide cases, both Herlihy and Bookman said it was too early to consider starting to roll back some of the ramp-up efforts at places like the Colorado Convention Center and The Ranch that are being turned into step-down care facilities to increase bed numbers ahead of the peak of the virus.

“We don’t know what the future holds,” Bookman said. “The curve is flattening but we don’t want to take our eye off the bigger picture. We don’t want to overwhelm the health care system.”

Bookman said it was still possible at some point that those efforts to build out more beds may be scaled back, saying that the state needs to use its resources wisely, but that it was important to be prepared for the surge.

He said that in his conversations with hospitals in recent days that most currently have the capacity to handle their current number of patients but that there was still a steady stream of COVID-19 patients in hospitals.

Officials are also planning on what the next response steps could be in working to reopen the state and some businesses, and what distancing measures would look like in the months ahead, Herlihy and Bookman said.

Herlihy said that Colorado still plans to have wide testing capabilities and a robust contact tracing network to ensure “comprehensive and prompt isolation and quarantining is occurring.”

Bookman said Gov. Polis and the state’s teams are looking at a number of strategies used by other states and countries on how to possibly start lifting public health orders in the weeks ahead. When asked whether Polis was considering entering into a consortium or sorts – as has happened with some west coast and east coast states – Bookman said Colorado was having conversations with other states as well.

Herlihy said the state hadn’t yet started pursuing using cellphone data tracking to support the theoretical contact tracing system and that the state was looking to hire additional epidemiologists and student epidemiologists to conduct the work – but that people’s data privacy would also be a major consideration when the state starts to build out its tracing capabilities.

And one of the biggest concerns in Colorado remains to be a shortage of personal protective equipment, both Herlihy and Bookman said. Herlihy said additional PPE was being sent to non-hospital health care and nursing home facilities to try to better protect patients and staffers at those facilities, which have seen several outbreaks that have killed dozens of people across the state.

Polis on Monday kept April 26 as the target date for the statewide stay-at-home order to be lifted, though it won't be a complete return to normal. Polis said the state will release information several days before April 26 about how businesses can return to a more normal operation.

Elizabeth Carlton, an assistant professor at the Colorado School of Public Health and a researcher on the state’s modeling team, agreed that data suggests “things may be slowing down” and that public health officials were waiting to see whether those trends hold in coming days. She said there is strong evidence social distancing measures are having a positive effect.

“We’re not entirely certain what’s going to happen in the coming days, but I think the best guess is that in the next few days or weeks, we won’t hit capacity, which would be very good news,” she said.

Carlton said that if social distancing measures have reached 80% less interaction between people than normal, it’s possible that the first peak has already been reached – an outcome she said was the “best-case scenario.” But she said that if hospitalizations and deaths start to decline in day-over-day numbers with the same number of cases being tested, that would be the main indicator.

“We’re hopeful that’s what’s happening right now – that we’re seeing this very early peak and that the peak is not so severe,” Carlton said.

But she warned – as have other health officials – that it would take “vigilant” efforts to prevent a second peak.

She said she believes mass testing will “play a really important role in the future” and said that various types of testing were being eyed by officials moving forward.

“Nothing is too crazy right now to put on the table because I think we need some really thoughtful, creative solutions.”

And Carlton said that having COVID-19 recovery numbers – which the CDPHE hopes to begin providing this week – would be another key to understanding the next phase of viral response.

“Understanding how many people we have recovered in our population is very important,” she said. “The more people we have that are recovered, and assuming that we have some sort of short- or long-term immunity to the disease, that means those people can’t get infected again. And I just want to highlight that we think there is at least short-term immunity to this, but there are still some open questions.

She said some other models, such as IMHE’s, predict a single peak – which she does not believe will happen. She said that now – and even after some measures start being lifted – that Coloradans will have to stick with the public health orders coming from officials.

“Now is not the time to go out and have a giant birthday party or go hang out with all your friends – as much as we miss all the social contact that keeps us going,” she said. “Now is the time to kind of hunker down and not lose this giant investment we have made to reduce contacts. And hopefully we can move to Phase II of this outbreak that looks a little more comfortable for all of us.”