Doctor on modeling team explains how their models work 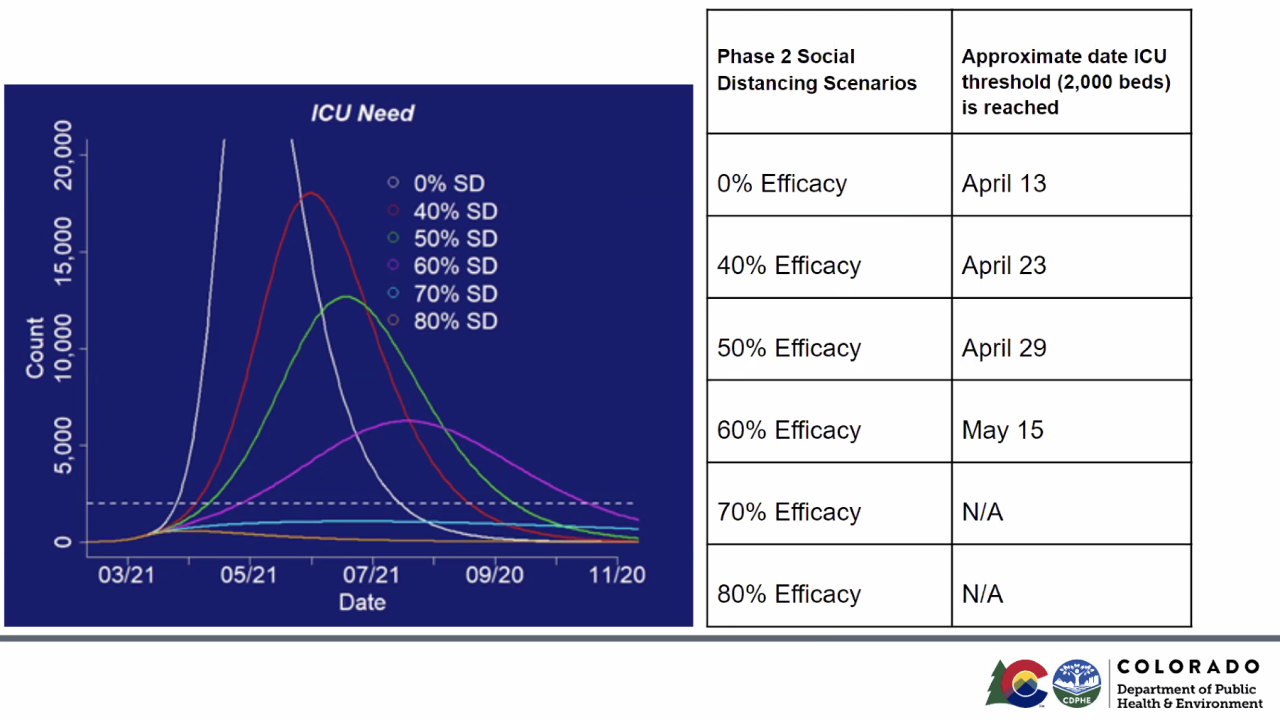 Copyright 2020 Scripps Media, Inc. All rights reserved. This material may not be published, broadcast, rewritten, or redistributed.
CDPHE
Officials showed a graph depicting a slight flattening of the curve under the 45% social distancing rate that started March 17, and then slides about what varying social distancing levels could do to spread out the peak of the virus in the state. 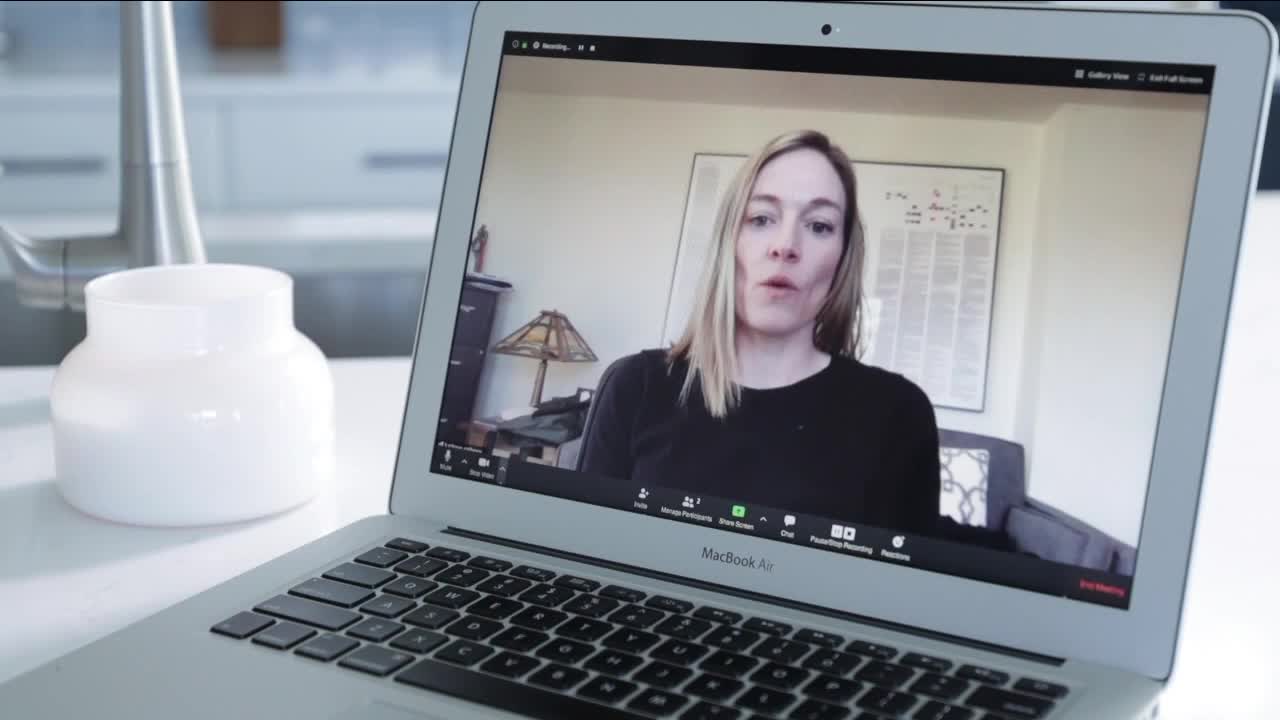 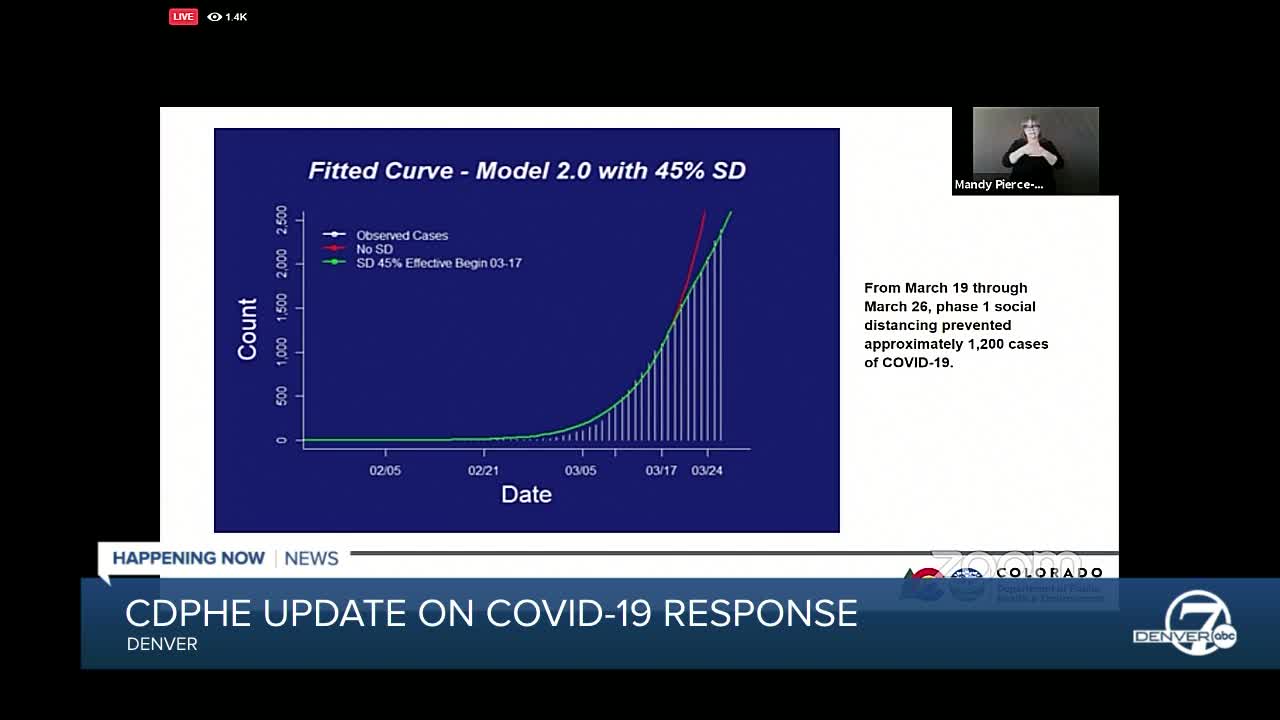 DENVER – Colorado public health officials said Monday they are “certain” that the state has not reached its peak in the COVID-19 outbreak and presented more data that showed that physical distancing measures are working in Colorado and could keep the state from running out of ICU beds once the peak of the virus arrives.

Jill Hunsaker Ryan, the executive director of the CDPHE, said that School of Public Health estimates show there are about 17,000-18,000 Coloradans who currently have, or had, COVID-19. That is more than three times the 5,172 confirmed cases reported by the CDPHE on Monday afternoon. Last week, officials said they believed Colorado had 4-10 times the number of cases that were reported.

Nearly 1,000 people – 994 as of Monday afternoon – have been hospitalized in Colorado due to the virus, and 150 people have died. Nearly 27,000 people have been tested, and there are 41 outbreaks at residential and non-hospital health care facilities – up from 37 on Sunday.

But Ryan said that the state was “still at the beginning of this epidemic” and was starting to see stress on the number of hospital beds despite some signals that distancing measures are working.

Dr. Rachel Herlihy, the CDPHE’s state epidemiologist, and Dr. Eric France, the CDPHE’s chief medical officer, both said that their data showed that the Colorado case count was doubling every 5 or 6 days at this point because of physical distancing and other measures, rather than the 1 or 2 days it was doubling earlier on in the outbreak.

Herlihy said that data as of Monday showed about a 45% reduction of interaction between people in the state but that scientists believe that the additional measures taken by the state in recent weeks – including a statewide stay-at-home order – will hopefully boost that number up to the 60-80% range in coming days and weeks.

Officials showed a graph depicting a slight flattening of the curve under the 45% social distancing rate that started March 17, and then slides about what varying social distancing levels could do to spread out the peak of the virus in the state.

“We are social distancing to save lives. If we wear masks and follow recommendations, we can save lives,” Ryan said. “Now is not the time to back off.”

The health officials responded to multiple questions about modeling from the Institute for Health Metrics and Evaluation that showed Monday that Colorado may have already reached its peak, and Ryan flatly denied that the officials believe that is the case.

Herlihy said the IMHE model and others were being considered in the state but that CDPHE and School of Public Health officials were using “data most-relevant to Colorado” for their modeling.

She said some of the IMHE’s modeling data include “assumptions” from the outbreak in Wuhan, China, that they don’t believe they are seeing on the ground in Colorado. Among those differences between the response there and here, Herlihy said there were big differences in the way the two places are conducting their physical distancing.

The Colorado Hospital Association’s vice president of clinical affairs, Darlene Tady, MD, said in a statement Tuesday that the message to continue physical distancing was the right one and that the CHA agreed with the state model rather than other models.

“Other models, such as the COVID-19 Projections from the Institute for Health Metrics and Evaluation (IHME) at the University of Washington, that have been distributed show that cases in Colorado may have already peaked. Unfortunately, we believe those studies may mislead Coloradans into thinking this is behind us, when in reality, it isn’t. That data doesn’t align with what is actually happening in Colorado hospitals currently – which we are tracking very closely,” Tady said.

She said about 20% of people hospitalized typically require critical care and often need a ventilator for support. She said patients are on average on a ventilator for five days, but some need them 10-14 days.

She said about 40-50% of hospitalized patients will need a ventilator at some point during their stay.

“The IHME study suggests that 110 ventilators will be adequate to support Coloradans who become sick with COVID-19. We know that there are nearly four times that number of patients on ventilators in Colorado hospitals today. Not only does this undercut the volume of COVID-19 and COVID-19-suspect patients in our hospitals, but it also entirely misses the other ICU patients who may need to be on a ventilator as well,” Tady said in a statement.

“We are all looking forward to the day when we can return to a more normal way of life, but as Governor Polis noted yesterday, we are not there just yet. On behalf of Colorado’s hospitals and our thousands of providers who are doing the heroic work of trying to save as many Coloradans’ lives as possible during this pandemic – we ask that the public continue their heroic role by staying home and social distancing.”

She has experience in modeling infectious diseases like malaria and HIV and is now using that skillset to model the COVID-19 outbreak in Colorado along with other statisticians, mathematicians and epidemiologists.

In an interview Tuesday, Dr. Colborn explained why the state is using modeling data and other methods to try to track the novel coronavirus, about which much is unknown.

“You start at a beginning of an outbreak with assumptions and a simulation because you don’t have any real data at that point,” she explained. “And so, our models have adapted over time.”

She said, as did CDPHE officials and the governor on Monday, that the team’s models show that social distancing measures currently in place are “very effective.”

But she, like others, cautioned people who believe the state’s peak may have already hit or that simply ending all social distancing measures in coming days or weeks would be effective – saying that could cause rates that are currently increasing on a linear scale to go back to exponential growth.

“What we predict through the mathematical models is actually that if you can only keep social distancing going at a strong level, like right now, in place for a month or two, then there should be a secondary spike in transmission later,” she said. “Maybe in June or July.”

Colborn said the IMHE statistical model shows there will be an early peak “and then there’s no secondary spike.” But she said it was “not very realistic” to think there wouldn’t be a secondary spike if social distancing measures are pulled back in full in the next few weeks.

She said that the team still knows there are many asymptomatic people in Colorado and that testing capabilities have changed over time, which makes tracking data more difficult. Thus, she said, officials were looking at hospitalizations and deaths as better indicators of where the virus is at in its spread.

“If you really want to see if we’re doing better in Colorado, you would look at what is the change in new hospitalizations daily or every two-to-three days in Colorado,” she said. “If that metric starts to go down, then we can say, ‘Hey, maybe we’re making some impact here on the transmission.’”

Colborn agreed with other state public health officials that she didn’t believe Colorado had reached its peak and that the team was still watching the lag from when physical distancing measures were tightened to when it will show up in the infection data.

“You kind of have to wait a while before you can really see the impact of a particular measure,” Colborn said.

She stressed, as have other officials, that the goal of the strict physical distancing orders is to keep hospitals from running out of ICU beds and ventilators, and thus, keep providers from having to decide which people get beds and which people don’t.

“The assumption there is if you need an ICU bed, 50% of people who get one will die and then 100% of the people who can’t get one will die,” she said. “It’s critical to buy the hospital time to expand. Otherwise, we’re not going to be able to provide the care that people need when they need it.”

And she agreed that while it was difficult to spend so much time at home, it was the best way to keep that scenario from unfolding in Colorado until mass testing and a better isolation program can be put in place.

“If we can keep social distancing in place for a period, get cases down to a particular point where we could manage them – say, through case detection and isolation – then I think we could move forward and see some of the success you saw in South Korea and Japan,” Colborn said.

“But right now, we have such a large number of cases that it’s hard to imagine pulling back on social distancing at this point.”

On Tuesday, deaths in Colorado jumped by 29 day-over-day — the largest increase on a daily basis seen so far during the outbreak in the state.

France said Monday about three-quarters of current testing for COVID-19 in Colorado is happening in commercial labs and that the state lab hopes to ramp up its capabilities from between 500-800 tests per day to about 1,500 a day over the next month.

And he said that a “potential” plateauing of case and hospitalization numbers could be a “bright light” if that trend continues this week and next week. Both he and Herlihy said that the current outlook was “optimistic” but that the next few days should show whether those trends continue. And they agreed that the physical distancing measures will likely be in place for months even if they are scaled back slightly as the curve flattens out.

“I imagine that our lives will be changed over the next many months as we try and live in a society where physical distancing will be important while we try to maintain our social connections,” France said.