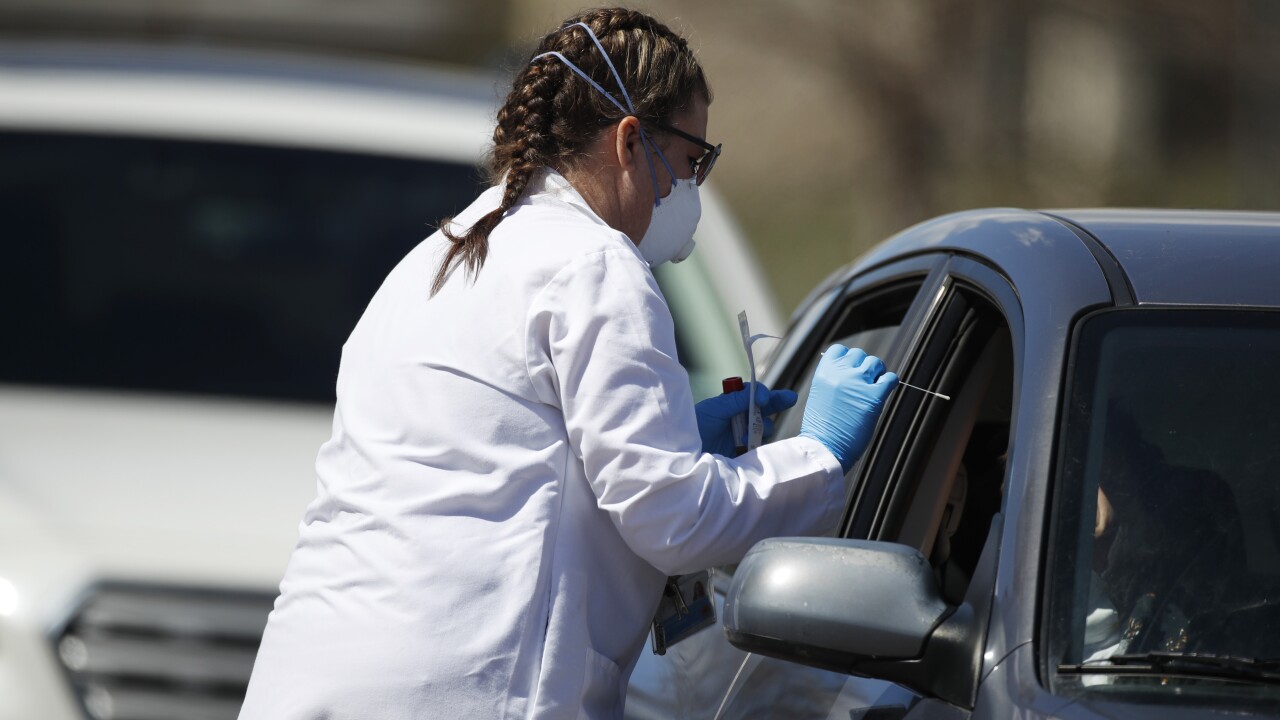 (Copyright 2020 The Associated Press. All rights reserved. This material may not be published, broadcast, rewritten or redistributed.)
David Zalubowski/AP
A medical technician reaches into a vehicle to administer a test to a passenger at a Stride Community Health Center drive-thru testing site as a statewide stay-at-home order remains in effect in an effort to reduce the spread of the new coronavirus Tuesday, March 31, 2020, in Wheat Ridge, Colo. The new coronavirus causes mild or moderate symptoms for most people, but for some, especially older adults and people with existing health problems, it can cause more severe illness or death. (AP Photo/David Zalubowski)

DENVER – Colorado’s COVID-19 incident commander said Thursday that officials estimate there are between four and 10 times more cases of the novel coronavirus in the state than can currently be confirmed due to a lack of testing resources from the federal government.

Scott Bookman, the Colorado Department of Health and Environment’s COIVD-19 incident commander, said those numbers are based off what state and university health officials in Colorado are modeling based off data from other states and countries.

For weeks, Bookman and Gov. Jared Polis have said that current testing rates cannot keep up with the spread of the virus within the state. They have pointed to a lack of federal resources coming in to the state to ramp up testing capabilities and have at times said they believe there are “thousands” more cases.

But the numbers Bookman handed out in a briefing Thursday morning was the first concrete estimate of the true spread of COVID-19 in Colorado.

As of the Wednesday release of COVID-19 data in Colorado, which shows figures through March 31, there were 3,342 confirmed cases of the virus in 50 of Colorado's 64 counties, with 620 people hospitalized and at least 80 deaths. A total of 18,645 people had been tested as of March 31, according to the data.

That would mean, according to Bookman’s estimate, that there could currently be between 13,000 and 33,000 cases of COVID-19 in Colorado.

Bookman said Thursday that Colorado has nowhere close to the materials it needs to test everyone in the state for the virus, much less all the health care workers, first responders and people who are hospitalized who are currently the only ones being prioritized for testing at the moment because of the lack of resources.

Polis wrote to Vice President Mike Pence last week to describe what he called a “dire” shortage of personal protective equipment, ventilators and other needed equipment in Colorado and pleaded for more help from the federal government. The governor said at a news conference Thursday that the state has only received a small fraction of the items requested.

Mike Willis, the director of Colorado’s Office of Emergency Management, said that FEMA was scaling up its medical resources and would be sending more supplies, but there is no delivery date for them as of yet.

Colorado has also placed orders for millions of items of PPE and other needed medical equipment, though Willis said there is no timetable for when that will arrive either. The state has an innovation response team working to gather more supplies and to get state-based manufacturers to contribute to the supply chain as well, but Willis and Bookman said they could not say when some of those resources might come available.

With testing and medical supplies in such short supply, the governor issued a statewide stay-at-home order that officials are pleading with people to abide by in order to slow the spread of the virus and to keep the hospital systems from becoming overrun with patients as officials try to ready a tiered system to utilize all types of facilities to treat COVID-19 and other patients who require various stages of medical intervention.

Polis and Bookman outlined a timeline at a Wednesday news conference by which the state hopes to increase its number of regular- and critical-care beds and ventilators in coming weeks.

It hopes to increase the number of ICU beds in Colorado from 1,800 to 5,000 by April 18 and to have 2,000 new “Tier 3” beds to treat people who need only occasional monitoring by nurses and a doctor by the same date – now just 16 days away.

Bookman said Wednesday that the state believes it can handle all of the patients without overwhelming the health care system if those goals can be met – with the peak of the virus expected sometime between April and July, he said.

Willis said the state was still in the contracting and leasing process to get more properties at which they can create these new beds and said officials were working with local communities, property owners and the Army Corps of Engineers to build out those facilities.

“Scott was frank with the public yesterday, so I’ll be frank today. We’re very concerned. It’s a heavy lift and a lot of things need to come together very rapidly,” Willis said.

The state Office of Emergency Management said it was working as quickly as possible to meet those goals.

“The @GovofCO is setting the goal high. We don’t want people to die by a lack of ventilators or the disease spread by a lack of PPE. Teams at the State EOC are working to meet these needs as quickly as possible,” the office said.

Click here for the latest COVID-19 updates in Colorado.