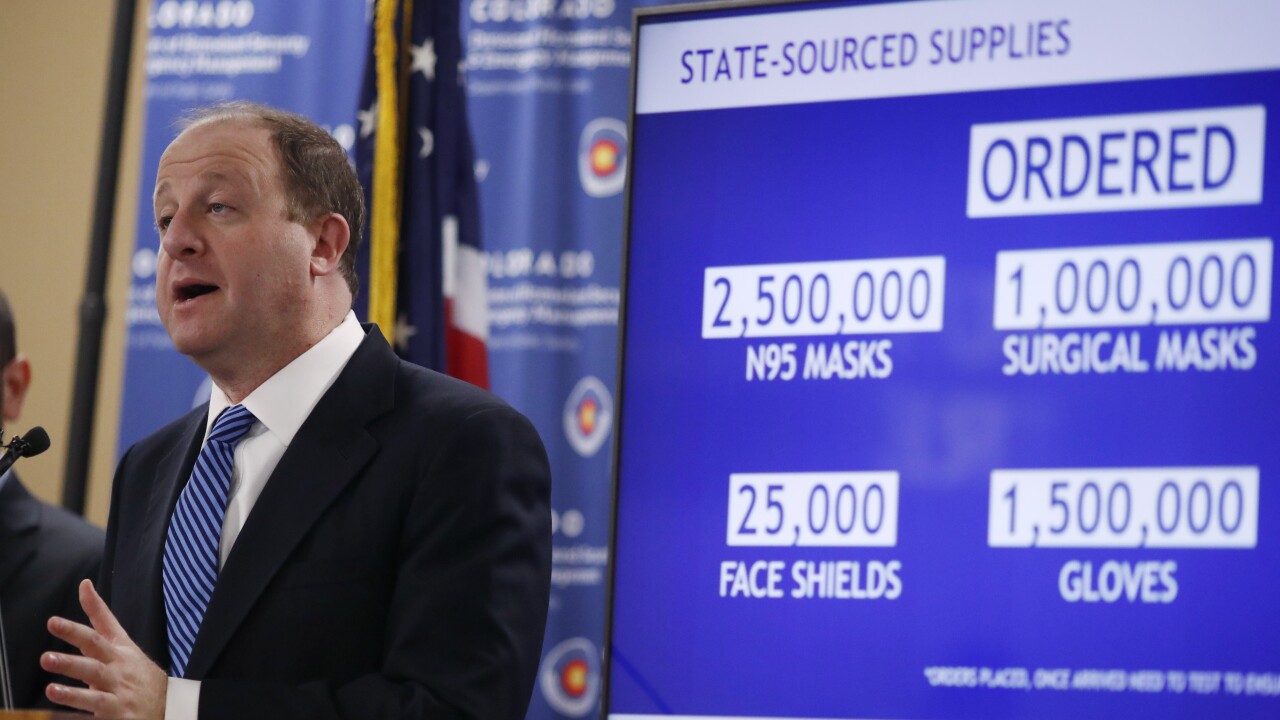 (Copyright 2020 The Associated Press. All rights reserved. This material may not be published, broadcast, rewritten or redistributed.)
David Zalubowski/AP
Colorado Gov. Jared Polis makes a point during a news conference as a statewide stay-at-home order remains in effect in an effort to reduce the spread of the new coronavirus Wednesday, April 1, 2020, in Centennial, Colo. The new coronavirus causes mild or moderate symptoms for most people, but for some, especially older adults and people with existing health problems, it can cause more severe illness or death. (AP Photo/David Zalubowski)

DENVER – The Colorado governor’s office on Thursday released a letter Gov. Jared Polis sent to Vice President Mike Pence on March 28 in which he discussed what he called the state’s “dire shortage” of PPE and ventilators and the wide gap between what has been requested from the federal government and what has been received.

During a news conference Wednesday, Polis went through a presentation showing that of the supplies requested by Colorado from the federal government, only a small percentage has been sent. According to the chart, Colorado has received just 11% of its requested N95 masks; 11.5% of the requested surgical masks; 40% of the face shields the state asked for; 14% of the surgical gowns it requested; 19% of the gloves requested and none of the 10,000 ventilators it has asked for.

He announced at the same news conference that Colorado was looking elsewhere to try to get the supplies it needs to fight the COVID-19 outbreak and prevent hospitals from being overrun.

He said in the letter the state has received a shipment with some of those materials on Thursday night – but only a fraction of what the state says it needs. Polis wrote that the shipment would “make a difference and buy us some time” but that more was needed.

Polis wrote at the time that the state’s death rate was rising faster than in any other state, though the state’s COVID-19 incident commander, Scott Bookman, said Thursday that the data has changed since a week ago.

But Polis told Pence that he was concerned about the lack of testing and assistance from the federal government – something he, Bookman and other state officials have discussed several times in recent weeks.

“I fear that because of our comparably smaller population, the staggering increases in cases and deaths are not fully registering in national models,” Polis wrote. “What we are experiencing in Colorado is far worse than we imagined.”

He said that the PPE shortage was creating a “dire” situation in the state – particularly in non-Front Range communities – and that health care workers are fearful of contracting the virus because of a lack of proper equipment.

“We are committed to proving this regional excellence, but our ability to do so will soon be shuttered if we cannot protect our health care workers in our already resource-constrained state,” he wrote.

He told Pence that getting more ventilators and PPE was the most pertinent need in order to “help us safely cross the bridge ahead of us until we can start to reap the benefits of our other unprecedented procurement and manufacturing efforts.”

Click here for the latest updates on COVID-19 in Colorado.