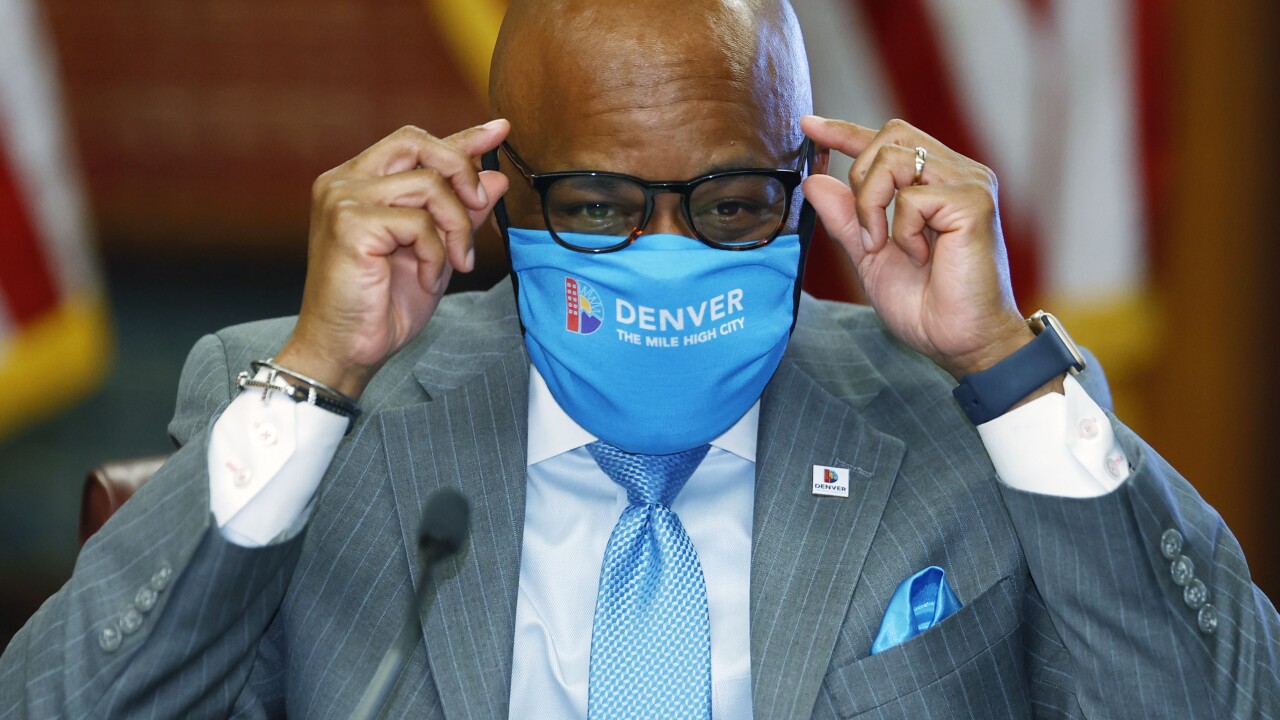 (Copyright 2020 The Associated Press. All rights reserved. This material may not be published, broadcast, rewritten or redistributed.)
David Zalubowski/AP
Denver Mayor Michael Hancock adjusts his glasses after putting on his face mask after a news conference to explain the city's plan to allow businesses to reopen as the city's stay-at-home order to stem the rise of the new coronavirus expires later this week on Tuesday, May 5, 2020, in Denver. (AP Photo/David Zalubowski)

DENVER – A day after Colorado’s governor told Coloradans to “wear a damn mask,” officials from Denver and the state health department reiterated how crucial mask-wearing would be in order to keep the currently-gradual increase in cases and hospitalizations from quickly growing exponentially.

Denver is one of many cities or counties with mask mandates in Colorado, though Douglas County officials have opted out of a forthcoming mandate from the Tri-County Health Department, which it is also leaving to form its own health department after the mandate was authorized this week.

Hancock and other city officials outlined the amended face covering requirement for the city as well. People in Denver are required to wear masks or face coverings when they are in line for or at any indoor or outdoor business or event; when they are inside or in line to enter government facilities; at health care and personal services operations unless directed otherwise because the service requires a person to remove their mask; in commons areas of apartments, condos, lobbies, pools, elevators, offices and other spaces used by the public.

They are also required when a person is walking into, inside or near a restaurant or bar except for when they are eating or drinking.

“It’s not a political statement,” Hancock said. “The reality is when you wear a mask, you’re demonstrating care for those around you. It’s the greatest tool we have to help combat the transmission of COVID-19 in our community.”

Hancock said the city had seen about a 60% jump in complaints over the last two weeks about noncompliance with the mask order, saying some people were getting a false impression that life is “returning to normal.”

The mayor and McDonald stressed that is not the case – and that adhering to the mask order, social distancing guidelines, and other safety precautions are the only way the city will keep its gradual increase from becoming a spike.

“These numbers are concerning. I urge everyone to pay very close attention. We have lost a little ground in our fight with COVID-19,” Hancock said, adding that a spike in cases and hospitalizations could lead to a pause or rollback on the city’s reopening, which he said would be “absolutely devastating to our economy.”

Hancock, as Polis did on Thursday, again criticized the federal government’s lacking a national, cohesive strategy.

“In absence of a national strategy — and trust me, we do not have one on testing — states and cities have had to develop their own,” Hancock said. “We need a national strategy around testing and on our confrontation on COVID-19. Right now, the United States of America is without leadership on this issue. It is not a surprise we are leading the globe in terms of infection rate, death rates and hospitalizations.”

Hancock and McDonald said that city officials were still working with the state to determine the future of the testing site at the Pepsi Center, which the city used federal COVID-19 money to fund, and that they hoped to have an update later Friday or early next week.

The site is currently capping its testing at 2,000 tests per day due to limited supplies and an increasing backlog at nationwide labs. But the site has tested an average of 10,000 people per week recently, the officials said.

McDonald added that Denver was currently “keeping up” with the amount of contact tracing it is having to do, but urged people to respond to phone calls, texts or emails if they are contacted as having been exposed to someone with the virus.

The Denver news conference came shortly after a separate news conference from the Colorado Department of Health and Environment in which the state epidemiologist and the department’s senior COVID-19 adviser addressed the status of the virus in the state and stressed similar sentiments regarding mask-wearing as did the Denver officials.

State Epidemiologist Dr. Rachel Herlihy said the current virus case increase is slower than the one Colorado experienced this spring, and that some, but not all, the increases in cases can be attributed to increased testing – along with a backlog of rest results received late this week.

The average age of Coloradans testing positive for COVID-19 has now fallen to 33 from the upper 40s in April, Herlihy said. She noted that while younger people are less likely to have severe symptoms, they can still infect others, and cases of the virus can still be severe in all age groups.

Herlihy said, like Polis did Thursday, that the virus’ reproductive value in Colorado was back above one, and that unless people start wearing masks more and do a better job of social distancing, that number would continue to climb.

Sarah Tuneberg, the COVID-19 Innovation Response Team Lead and Senior COVID-19 Advisor, said officials were “seeing things flow together in the way we’d like” regarding the statewide positivity rate in the 4% range – below the World Health Organization’s goal of 5%.

But she, like McDonald, also noted the other important factors surrounding hospitalizations and lags in reporting. She said that the state was so far doing “an exceptional job” of procuring and keeping hold of testing and other supplies, but that there was always a chance of future shortages.

Tuneberg reiterated what state officials have said time and again as well – that mask-wearing is part of Colorado’s culture now and needs to be treated as such by Coloradans and those visiting the state.

“In order for us to maintain this great posture, we need Colorado residents to do their part,” she said. “Mask wearing, social distancing – creating a culture of disease transmission reduction. We want to be in partnership with every Coloradan on that.”