There are a myriad of weather conditions that will affect various parts of Colorado into the weekend – with heavy snow in the southwest, snow squalls moving through the mountains Friday and extremely high winds expected in the mountains and along the Front Range and eastern plains through Saturday.

DENVER – There are a myriad of weather conditions that will affect various parts of Colorado into the weekend – with heavy snow in the southwest, snow squalls moving through the mountains Friday and extremely high winds expected in the mountains and along the Front Range and eastern plains through Saturday.

Fairly-new snow squall warnings were issued for central and northern Colorado Friday afternoon – including in Routt, Eagle, Pitkin, Park, Summit, Gilpin, Grand and Clear Creek counties – through the 3 p.m. hour and until 4:30 p.m. for heavy snow squalls that could dump 2 inches per hour, along with winds gusting up to 40 miles per hour.

The National Weather Service said whiteout conditions are possible during the squalls, along with potentially “life-threatening” travel conditions.

The squalls were moving through as westbound I-70 was shut down between Summit County and the Idaho Springs area because of rockslides that came after this week’s snowstorm.

Once the squall warnings expire, there will still be dangerous wintry conditions across much of the state into the weekend.

Winter storm warnings remain in effect for southwestern and central Colorado, where several more inches of snow – and up to 2 more feet in some places – could fall into Sunday morning.

High winds, coupled with the blowing snow, could make travel in much of the area impossible, and wind chills could fall to 25 degrees below zero.

There are also avalanche warnings in effect in southwestern Colorado.

Meanwhile, high winds are moving into the state and are expected to ravage much of Colorado Friday through Saturday.

In the mountains and foothills, westerly winds are expected to be between 35 and 45 miles per hour and to gust up to 90 miles per hour starting around 8 p.m. Friday through 6 p.m. Saturday.

Along the Front Range and on the plains, sustained winds are expected out of the northwest at 30 to 40 miles per hour, with gusts up to 60 miles per hour, starting at 9 a.m. Saturday through the evening. The snow that fell earlier this week is expected to blow into drifts as the wind moves through.

High profile vehicles are expected to be halted during parts of the storm because of the high winds. High Wind restrictions were already in effect for the southern 94 miles of I-25 to the New Mexico border as of Friday afternoon. 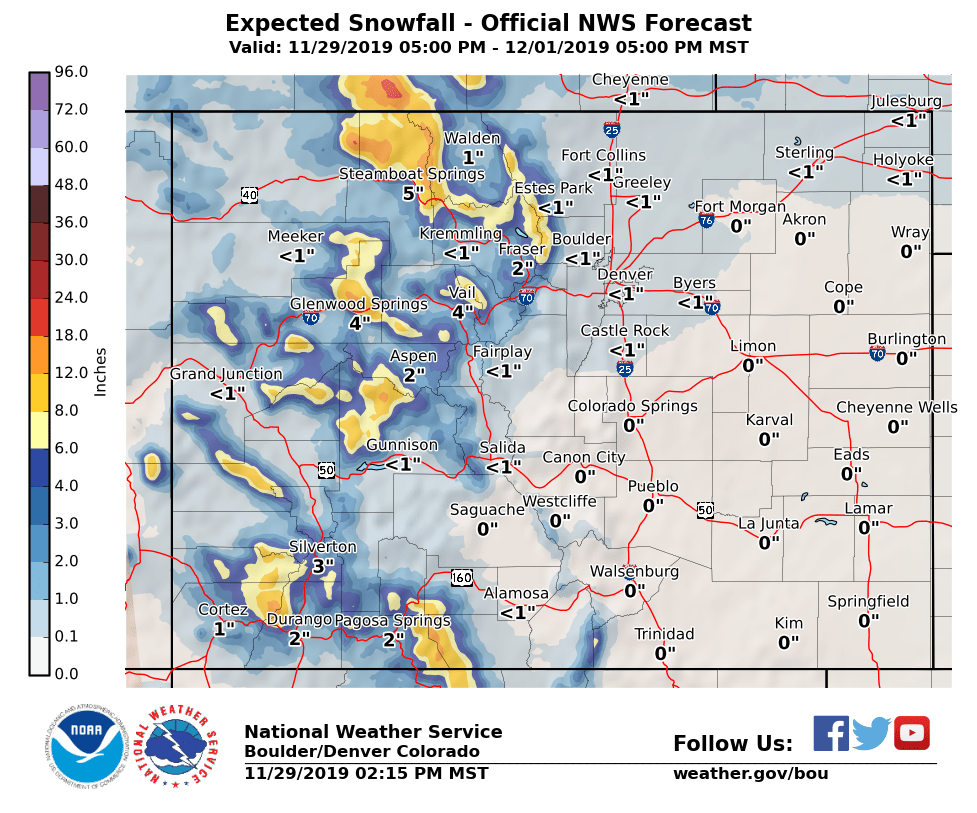 Some areas of the plains could see brief bursts of snow, and central mountain locations are expected to see up to 4 inches at lower elevations and slightly higher totals at higher elevations.

There are winter weather advisories in effect for the Western Slope for snow and wind.

For Denver, temperatures will remain in the 20s on Friday and should reach near 40 degrees on Saturday, but the wind will make temperatures feel far colder.

Stay with the Denver7 weather team for the latest updates.