Colorado is 99.99% drought-free as of Thursday, but water reservoirs still low statewide

For the first time in nearly 20 years of monitoring by the U.S. Drought Monitor, Colorado is experiencing nearly drought-free conditions statewide, though reservoir levels are still below normal.

DENVER – For the first time in nearly 20 years of monitoring by the U.S. Drought Monitor, Colorado is experiencing nearly drought-free conditions statewide, though reservoir levels are still below normal.

As of Thursday, 99.99% of Colorado was drought-free. Just .01% of the state was experiencing abnormally dry conditions, according to the Drought Monitor. The Colorado Climate Center said the tiny portions of the state that were abnormally dry were in Montezuma and Yuma counties. 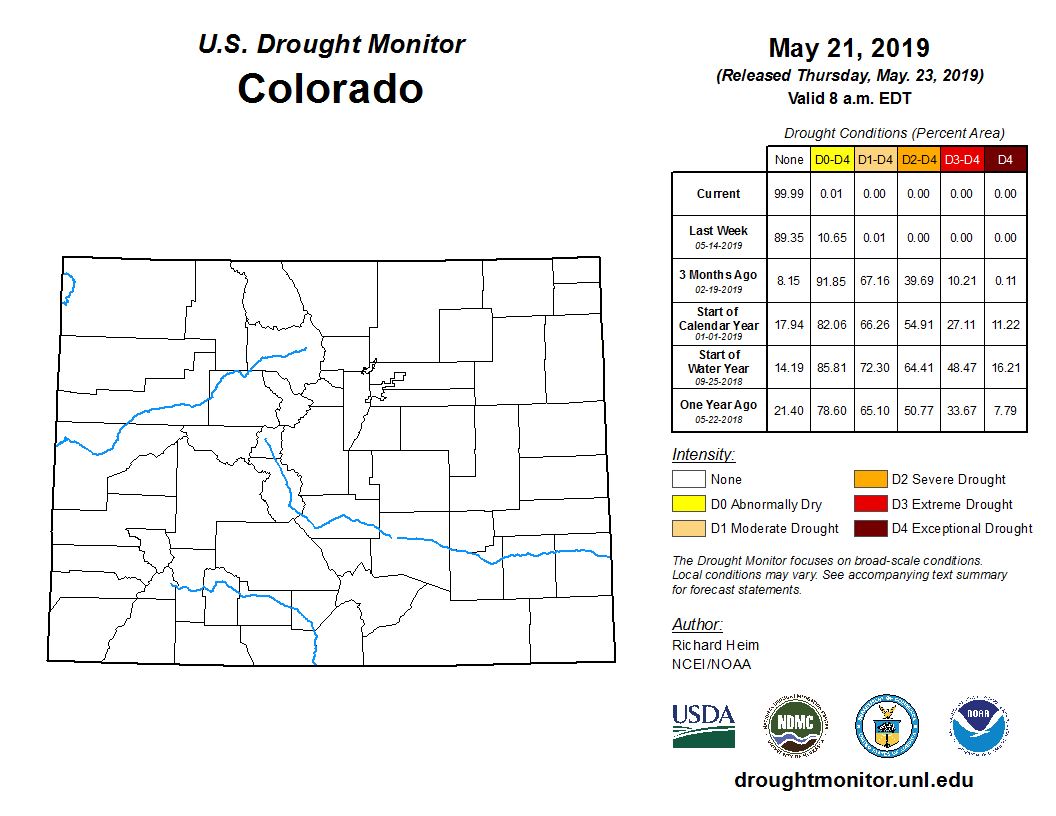 "We are the lowest coverage on the map that we ever had since the Drought Monitor started in 2000," said Russ Schumacher, a Colorado state climatologist and professor at Colorado State University. "We’ve never had this little color on that Drought Monitor map." 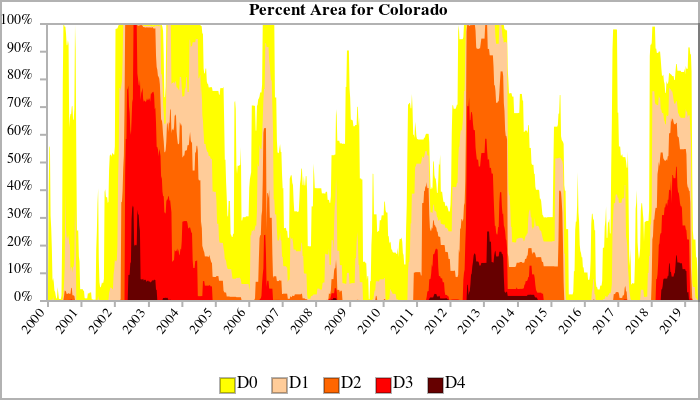 Colorado’s snowpack was at 252% of normal as of Thursday, according to the Natural Resources Conservation Service, and up 662% from where it sat on May 23, 2018. Some towns and counties are anticipating and preparing for flooding in coming weeks once the snow begins to melt, though snowpack levels jumped back up after several storms in recent weeks.

"We are at more than double what we normally have this late in May so there is still a ton of snow still," Schumacher said.

But Colorado still has a way to go to replenish its reservoirs and pull out of a long-term drought.

The Palmer Drought Severity Index in Colorado was still hovering around -2 in April, according to NOAA’s National Centers for Environmental Information, indicating moderate long-term drought. The PDSI hasn’t been in positive territory, indicating normal levels, since the latter half of 2017.

Reservoir storage statewide was 90% of average at the end of April, but just 53% of capacity and down from last year’s average, though much more of the snowpack had melted at this time last year.

Southwest Colorado’s reservoirs still have the longest way to go, with the Gunnison basin at 81% of average, the San Miguel, Dolores, Animas and San Juan basin at 76% of average, and the Upper Rio Grande basin at 79% of average and just 27% of capacity.

Those reservoirs are likely to see their stores grow in coming weeks though, as all three of southwest Colorado’s basins are also sitting at snowpack levels more than 300% of median.

With more precipitation in the forecast over the next week or so, it’s possible that the last 0.01% of abnormally dry land is drought-free by next week.

The Drought Monitor said 0 people were experiencing drought, meaning it’s unlikely anyone lives in the tiny areas that are abnormally dry.

The wet winter the state experience has caused some outdoor recreation companies to change how it is approaching the summer season.

Alan Blado, the owner of Liquid Descent Rafting Company in Idaho Springs, has been keeping a close eye on the state's snowpack for months. A wet winter means rivers where his company operates will be running higher, posing additional dangers.

"When the water is lower, it’s moving a little slower. There are a lot of rocks, so there are many more obstacles, so it is much more technical for the guides," Blado said. "At high waters, we don’t have rocks but we have bigger rapids, faster moving water and a lot higher flow."

Blado has been preparing for a high-water season since about March. He has been recruiting class 5 kayakers and more experienced rafting guides who will be able to handle the faster waters while taking customers out on the river.

The faster waters pose unique challenges since rafters who fall out of boats can be swept down the river more quickly.

"Our main concern then it is swimmers taking a long swims. This water was snow melt not too long ago, so it’s very cold. So obviously, hypothermia is a big concern of ours," Blado said.

Because of those risks, along with hiring more experienced guides and safety kayakers to follow rafts and pick up people who fall out, Liquid Descent will also be running safety boats behind rafts full of visitors and it will have people staged along the shore to help.

In recent years, the company has also invested in more safety features for the rafts like footholds so that fewer people will fall out if the raft hits a rapid.

Last year, Liquid Descent has to stop operating on July 20 along Clear Creek since the water was so low. This year, Blado is hoping to make up for the added costs with a longer rafting season. He anticipates that the rafts could run through Labor Day and says Clear Creek could break the 100,000 mark for rafters.

However, the length of the season depends on how quickly the weather warms up. He's hoping for a gradual warmup so that the snow doesn't all melt at once and leave little for the end of the summer rafting season.

This higher than normal snowpack is not something that is totally out of the ordinary for Colorado. In fact, 2011 had a better snowpack in May than this year. The snowpack in 2014 and 2015 was also good for Colorado. Blado doesn't believe that there will be a point when the rivers will be too high to safely take rafters for a ride.

"We are not anticipating having to close down this year. We might start running some rapids or some sections differently, but we should be able to continue operating and taking lots of people rafting," he said.

Liquid Descent has already started running for the season. Blado encourages families to do their research before going rafting so they understand the risks.