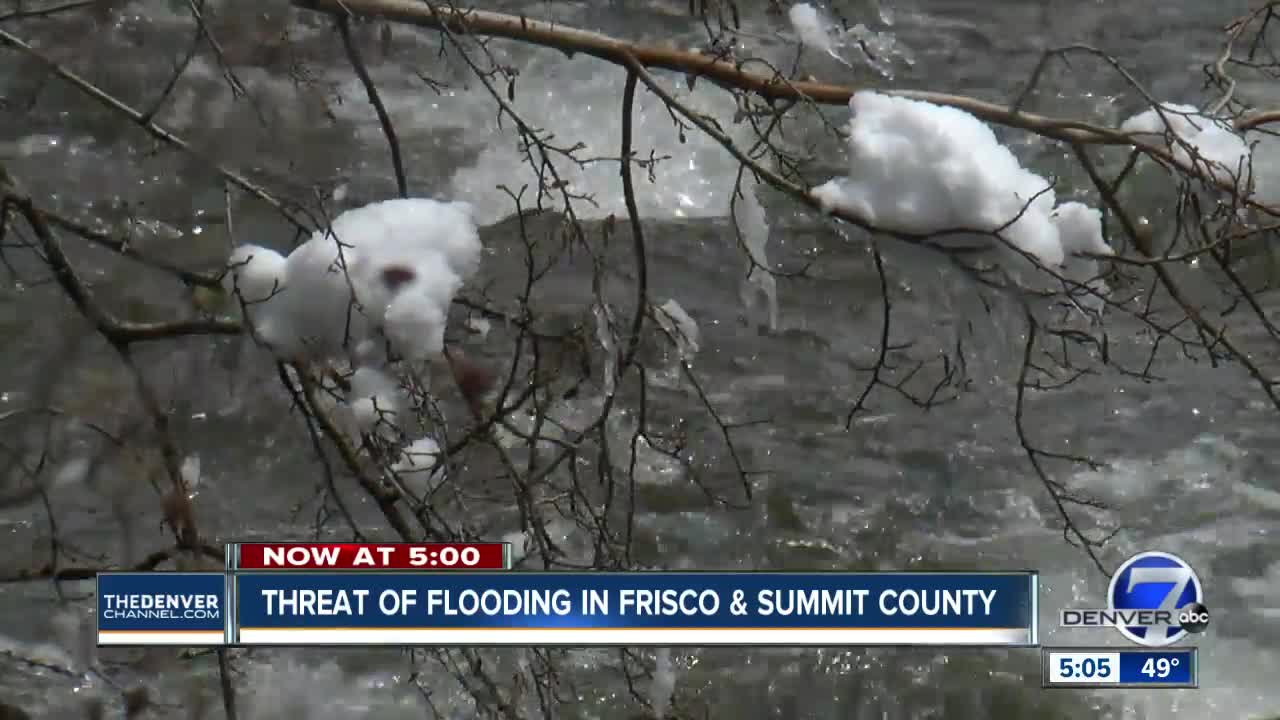 FRISCO, Colo. — Several towns and counties in Colorado are preparing for flooding after a snowy winter and several spring snowstorms have led to the state’s best snowpack in eight years, which is now on the verge of melting into runoff.

Statewide snowpack was at 211% of normal as of Wednesday, according to the Natural Resources Conservation Service, and up 536% from where it sat on May 21, 2018.

Take the above-average snowpack, add in historic avalanches that deposited debris in Tenmile Creek, and the town of Frisco wants to be ready for potential spring flooding. That’s why they’re taking extra steps this year to prepare.

“Are we sounding the alarm at this point? No, but we’re preparing,” said Frisco’s communications director Vanessa Agee.

Aerial shots of the avalanche areas show full trees, branches, large rocks, sediment, and snow still covering the recreation path that runs along I-70 and partially in the creek. That waterway eventually flows right through downtown Frisco.

The Frisco Public Works Department is inspecting the creek’s street crossings twice a day to look out for and remove any debris built up in the creek, and the town has staged a construction backhoe along Main Street near Tenmile Creek in case any backups happen. Sandbags are also being offered to residents, as they are every year.

“We made plans with the understanding that the debris may come our way,” Agee said.

“I hadn’t thought about the trees coming down with the flow and I guess that is a concern,” resident Terese Tane said.

Tane lives right next to one of Tenmile’s offshoot creeks. She says she’s relieved that the town is taking extra steps to be proactive this year.

“That’s great to hear because there is such a big unknown at this point,” she said.

Summit County says they are prepared to respond to flooding if it happens. A statement from a spokesperson read in part: “In the case of a significant flooding event anywhere in Summit County, we will establish a fire-rescue and law-enforcement incident command to respond to and manage the event.”

County and local officials stressed that potential flooding depends on the weather.

Frisco residents can pick up sandbags at the Public Works building (102 School Road) Monday through Friday from 8 a.m. to 4 p.m. The first 100 bags per lot are free, and are 25 cents apiece beyond that.

But residents are asked to fill their own sandbags at three piles set up throughout the town: 6th Ave./Galena Street; Madison Ave./Sunset Dr. or the Public Works shop on School Road. Once residents are done using the bags, the town is asking people to return to the sand back to the piles.

Avalanches this winter and spring sent large amounts of trees, rocks and earth into Henson Creek and the Lake Fork River, which runs through town.

When [the log and ice jams] release it could cause extensive damage to the town and the local infrastructure,” the Mineral County Sheriff’s Office wrote on its Facebook page.

Combined with typical runoff that happens each year, the county says it expects flooding to occur as the waterways become backed up with water. Henson Creek Road and Lake Road are closed at certain points until further notice, the county said.

Gov. Jared Polis has already authorized an executive order to establish a state of emergency in the county, and a coordination group has deployed to the county to try and mitigate the possible flooding and helping community members prepare.

Emergency operations managers are hoping volunteers can fill 1,000 sandbags each day for the next two weeks to prepare for the possible floods. Authorities are calling for volunteers to sign up here.

On Thursday, a group of people is going to Lake City to help fill sandbags, which is being organized by the Monte Vista Police Department. People hoping to help can call 719-852-6161 for more information.

The state Department of Regulatory Agencies has more guidance on flood insurance for people who believe they could be affected by flooding this year.