Joseph gives his side of DT's grievances 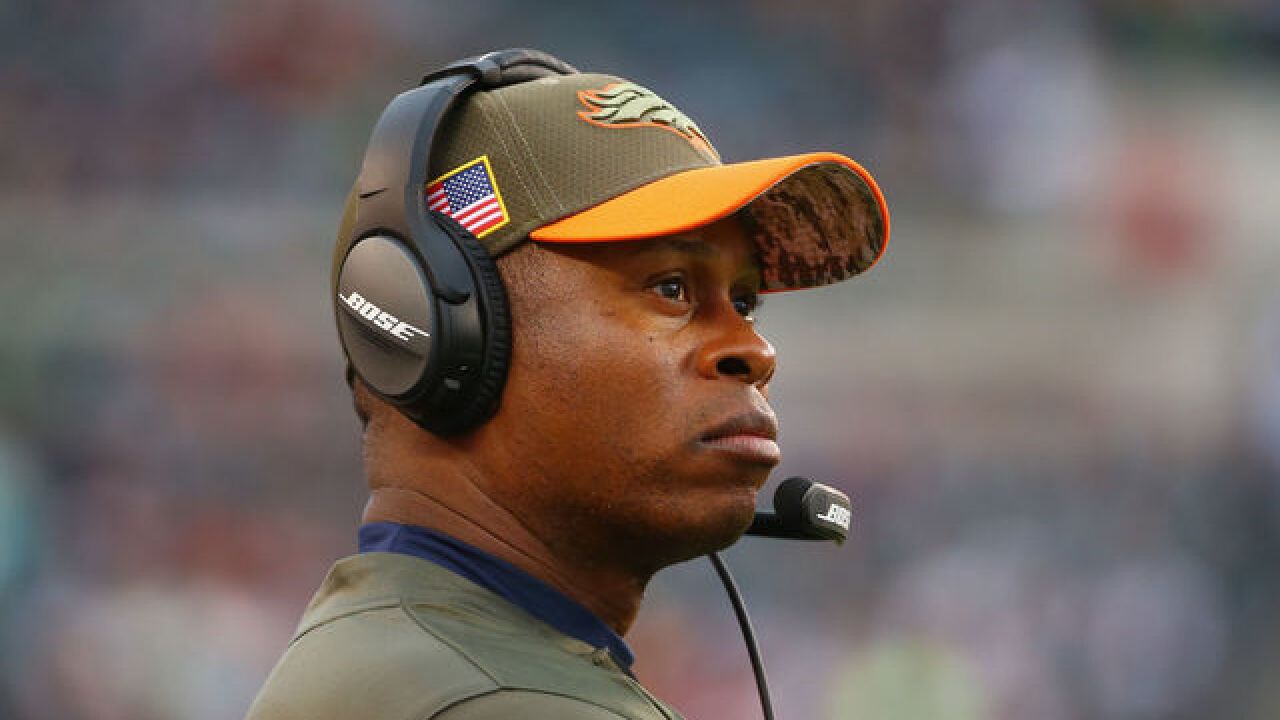 2017 Getty Images
Mitchell Leff
<p>PHILADELPHIA, PA - NOVEMBER 05: Head coach Vance Joseph of the Denver Broncos looks on against the against the Philadelphia Eagles during the fourth quarter at Lincoln Financial Field on November 5, 2017 in Philadelphia, Pennsylvania. (Photo by Mitchell Leff/Getty Images)</p>

Coach Vance Joseph labeled former wide receiver Demaryius Thomas' accusations about trade talk between the pair "disappointing," and insisted he was unaware Thomas was "heartbroken" over not being named a team captain.

"I’m disappointed to read those things about how he recalls the conversations going. It was obviously a week and a half where the rumors and gossip were flowing, and we talked about the rumors and gossip. Until something happened, we all had to focus on doing our jobs and winning football games," Joseph said. "From my end, that was discussed. I’m disappointed in how he remembers it, but again, we have great respect for D.T. He was a great player here and we honored him on Sunday. I think it’s a little frustration on his part, but I’m disappointed in how it came out because I don’t recall it being discussed that way. And that’s OK."

Thomas returned to Denver last Sunday, helping the Houston Texans to a 19-17 victory. Speaking Monday on 760 AM, the Broncos' radio partner, Thomas aired several grievances. He implied Joseph lied to him about trade discussions.

"Monday before (the trade) Vance Joseph walked up to me and he said, 'Don't listen to the trade talk; it's not true,'" Thomas said. "When he said that to me, I said, 'How is that not true? My agent called me today and said Elway wanted a fifth-round pick for me.' So, are we telling stories to each other now? I thought we were going to men about this. I knew something was going to happen."

In my experience covering trades over the past 25 years in pro sports, this represents the danger in discussing hypothetical scenarios with players. Teams will often tell a player he is available in a trade, that they will attempt to keep the athlete or his agent informed, but it remains a fluid situation. Not ideal, but realistic.

When Joseph talked with Thomas, his information could have been correct regarding trade talks. Then an hour later, or a day later, everything could have changed based on a suitor's offer. And remember, Joseph wasn't making and fielding the calls. The front office occupied this role, which is why honest ambiguity would have served the coach better or no communication at all.

From Thomas' perspective, he felt he deserved respect as a future Ring of Famer and as the team's longest-tenured player. This is why you let Thomas know you are fielding inquiries, but make no promises. In Joseph's attempt to manage a delicate situation, it's easy to see from Thomas' view how Joseph might have made it worse.

Thomas' other central issue centered on his locker room role. He said the team was not on board with how he was mentoring the young receivers, leading to a meeting with the front office. Soon after, the team voted on captains, and he was not among them.

"I've been here nine years and I can't even be a captain. ... I was on guys and I guess they didn't want it that way," Thomas said. "But then I had a meeting, I was like, 'OK, I'm gonna be a captain again,' I go to a meeting room and it's like every player came to me and were like, 'How you not a captain? We picked you.' ... It was heartbreaking."

I asked Joseph Wednesday if he knew how disappointed Thomas was over this snub. Thomas, after all, had served as a captain for multiple seasons.

Questions about the captain selections have been a hot topic the past two seasons, namely after the choice of former quarterback Trevor Siemian. The players vote, but former players have groused to me that they believe the results are manipulated. I have no way of proving that, but the suspicion exists in some quarters.

An awkward exit is not uncommon when a star leaves the team that drafted him. Acrimony mushrooms, and fans take sides, in this case, Thomas' because of Joseph's poor coaching record. Thomas earned the right to be treated with respect, though I believe he was naive to think his future was secure in Denver. The Broncos debated whether to keep him in the offseason -- they stayed committed to Thomas and Emmanuel Sanders to help recruit a free agent quarterback -- and general manager John Elway was critical of Thomas' play last season. And this is where Thomas lost me -- he couldn't fathom why he was asked to cede snaps in the New York Jets game to rookie DaeSean Hamilton.

Three years ago, the idea would have been blasphemous. Thomas, though, hasn't been a star receiver since 2015, his yards per catch has declined in five straight seasons, and his recent nosedive in production coincided with a battery of dropped passes and a mammoth contract. Expectations change when the salary does. And in rookie Courtland Sutton, the darling of training camp who has improved throughout the season, the Broncos drafted Thomas' replacement. It doesn't make it any easier. But it represents the cycle of life in professional sports.

This is the issue with losing teams. Distractions surface. Change is constant. Thomas' feeling upset with the way the Broncos handled his exit is understandable given his career in Denver. And Joseph was right to defend himself. Both things can be fair and true.

The problem is that it highlights a sobering reality: the 3-6 Broncos remain more interesting for what happens off the field than on it.