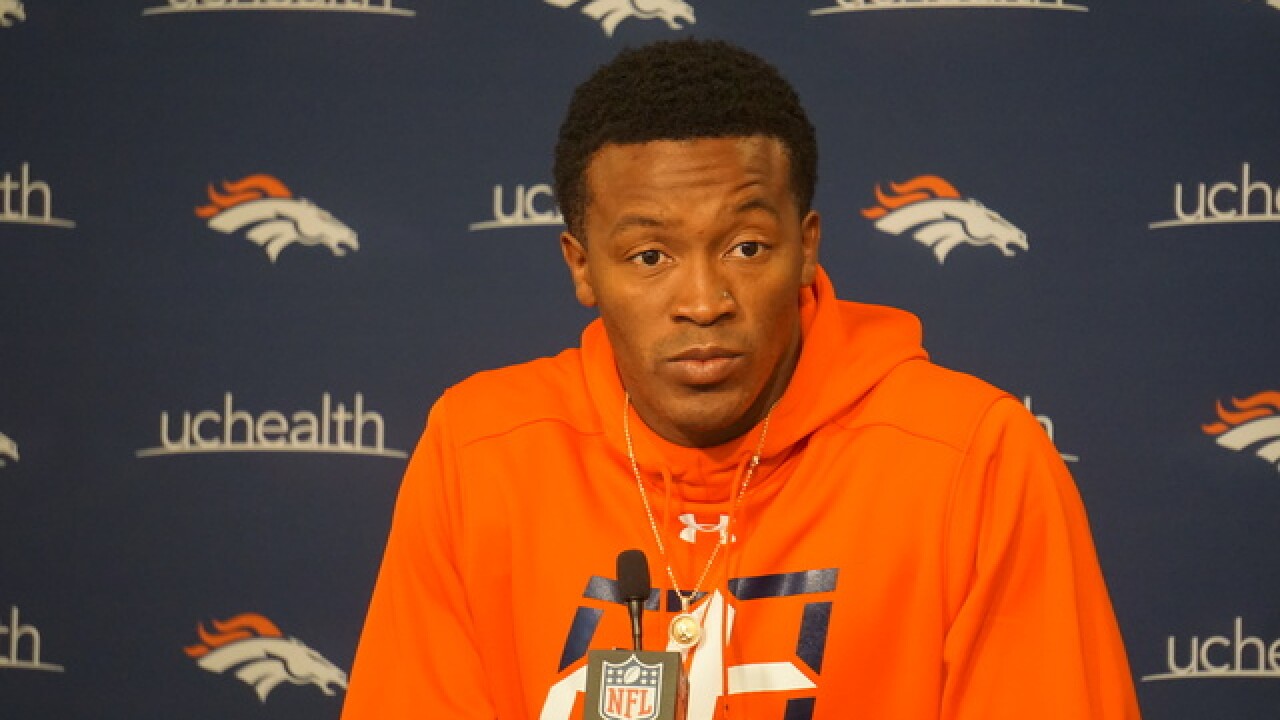 ENGLEWOOD, Colo. -- Demaryius Thomas stood at his locker Monday afternoon, slowly pulling on his black Under Armour jacket and shaking his head.

"There's nothing to add," Thomas told teammate Emmanuel Sanders as the media waited to see if the receiver wanted to talk.

The longest-tenured Bronco entered Tuesday on the shortest leash, a prime trade candidate for a team in transition looking to create playing time for rookie Courtland Sutton and salary cap relief.

After weighing offers over the last several days, the Broncos shipped Thomas to the Houston Texans for a 2019 fourth-round draft pick, abruptly ending the Denver tenure of a sure-fire Ring of Fame player. The teams will also exchange seventh-round picks in the upcoming draft.

Thomas knew this was coming, and the team confirmed it when meeting with him Tuesday morning. The Patriots and Titans were among the teams interested, but the Texans won with their bid. What was a possibility two weeks ago became a probability following last Sunday's loss the Kansas City Chiefs. The Broncos reached the halfway point at 3-5 with their playoff hopes flickering.

In an odd twist, the Broncos will face Thomas on Sunday. Denver plays Houston needing a victory to stay in contention.

“Demaryius had an incredible run here and we can’t thank him enough for everything he’s meant to the Broncos,” Broncos General Manager and President of Football Operations John Elway said in a statement. “He developed into an elite player over the years, establishing himself as one NFL’s most productive, consistent and reliable wide receivers. D.T. was a big part of so many wins and memorable moments as a Bronco. Although it’s tough to end this chapter, we’re excited about the talent we have at the wide receiver position and wish Demaryius all the best with the Texans.”

Thomas continued to lose targets to Sutton. Thomas has 36 catches for 402 yards and three touchdowns. His 11.4 yards per reception marks his fifth straight season in decline, and his projected 804 yards would be his lowest since 2011.

Sutton, the team's most-recent second-round draft pick who began turning heads in training camp, owns 17 catches for 324 yards with a pair of touchdowns. His 19.1 yards per catch ranks third in the NFL.

The idea of moving on from Thomas, however, is jarring. He is a four-time Pro Bowler, and ranked in the top 10 in receptions and yards four times in Denver. He flourished under Peyton Manning, and helped the Broncos win Super Bowl 50. Former Broncos great receiver Ed McCaffrey told me on NFL radio Tuesday that Thomas is a "no-brainer" for the franchise's Ring of Fame.

"I love ‘D.T.’ (Thomas). He’s been a great teammate to me and we’ve had great competition for eight years that I’ve been here. I know he’s going out there and he’s giving it his all," cornerback Chris Harris Jr. told me on Monday. "I’ve won a lot of games with him."

Reached after the trade, Harris told Denver7, "This hurts."

Thomas, who turns 31 on Christmas Day, has served as a captain and played through multiple injuries that impacted his production in recent seasons. He dealt with neck and hip pain. The slight tear in his hip labrum last season left him unable to create separation or cut as sharply. Teammates respected his toughness and work ethic.

While once a fan favorite -- and he clearly still is to some -- Thomas has become a target of criticism for his ill-timed drops. He is tied for sixth this season with four. Last January, the Broncos considered moving on from Thomas after the Broncos missed the playoffs for a second consecutive year.

However, the Broncos wanted to land a free agent quarterback -- Kirk Cousins was the top target, but was never coming to Denver because he viewed Minnesota as closer to a Super Bowl -- and held onto Thomas and Emmanuel Sanders. Sanders is aging like Benjamin Button, on pace to threaten his single-season bests for catches and yards.

The Broncos picked up Thomas' $4 million option bonus to keep him. He is making $8.5 million this season, but can be released with a $3.5 dead cap hit after this year. Even with Thomas and Sanders, quarterback Case Keenum has been disappointing, matching 10 touchdowns with 10 interceptions.

"DT is the best. He is a pro. I absolutely love being around him. I love being his teammate. I am honored to be his teammate," Keenum said last Sunday. "He has to be the best Bronco wide receiver in history, right? Debatable? It is a pleasure to be around him and I am glad that I am his teammate.”

“Demaryius will always be part of the Denver Broncos family. He was a special player for this organization during a very special time for the Broncos and our fans,” Broncos President and CEO Joe Ellis said in a statement. “We’re proud of all Demaryius accomplished on the field while also very quietly doing some outstanding work in the community, representing the team with class and humility. We look forward to honoring D.T. one day as a Ring of Famer and appreciate his many contributions to the Broncos.”

There's no denying Thomas boasts a terrific Broncos career. His highlights include 35 touchdowns from 2012-2014, and his walkoff playoff score against the Steelers, hauling in a pass from Tim Tebow.

However, Sutton is the newer version of Thomas. Thomas served as a mentor and delivered production for nearly a decade, but now he's being moved to create room for a younger player.