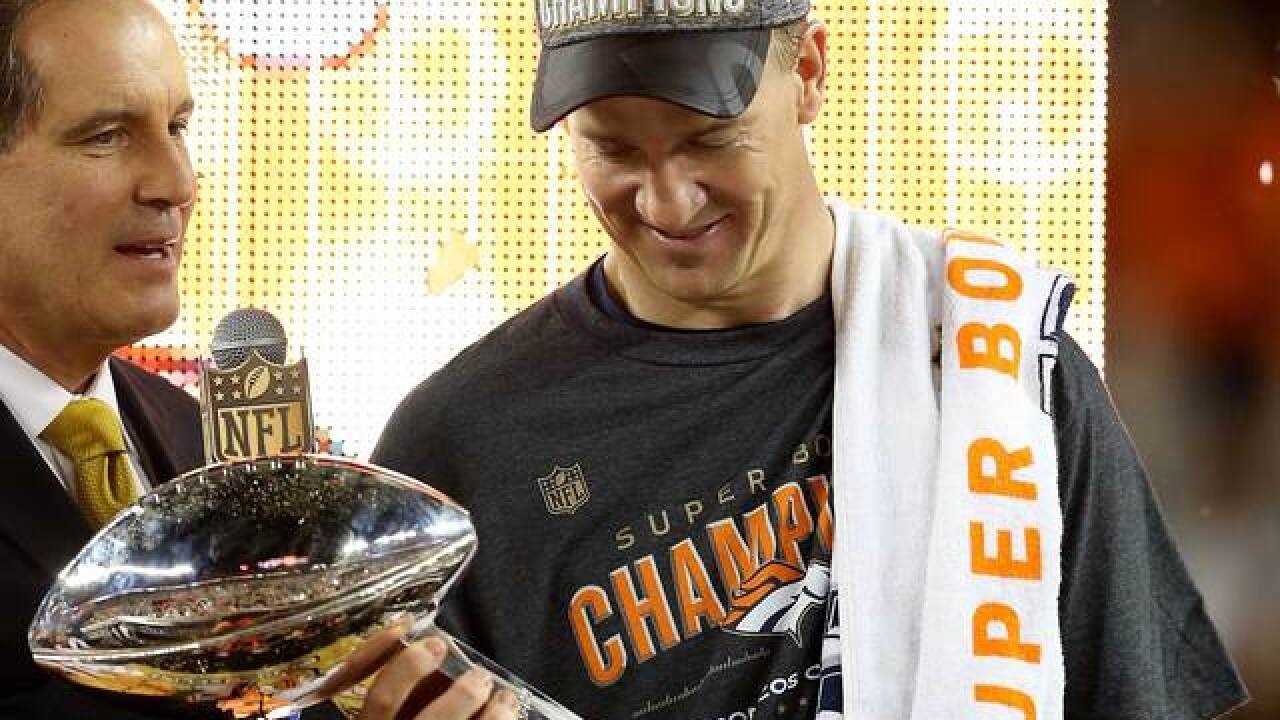 One month after winning the Super Bowl, Denver Broncos quarterback Peyton Manning will retire, the Broncos have confirmed.

On February 7, Manning and the Broncos won the Super Bowl. On March 7, Manning will hold a news conference at the Broncos team headquarters to formally announce his retirement.

Manning played 18 seasons in the NFL with the Indianapolis Colts and the Denver Broncos.

“Peyton was everything that we thought he was and even more -- not only for the football team but in the community," Broncos general manager John Elway said Sunday. "I’m very thankful Peyton chose to play for the Denver Broncos, and I congratulate him on his Hall of Fame career."

Manning is the NFL’s only five-time Most Valuable Player whose 14 Pro Bowl selections are tied for the most in league history, according to the Broncos. Manning was also a Super Bowl MVP and a seven-time first-team All-Pro. His team made the playoffs in 15 of his 18 seasons, according to ESPN.

Manning was drafted by Indianapolis as the 1st overall pick in 1998 NFL draft. He played 13 seasons for the Colts before multiple neck surgeries forced him to sit out the 2011 season.

When the Colts cut Manning, he joined the Broncos as an unrestricted free agent on March 20, 2012.

When the Broncos announced the move, owner Pat Bowlen said, "Peyton is one of the best ever to play this game. I feel very fortunate to have him here."

"Our goal has always been to win Super Bowls," Bowlen said in 2012. "Peyton gives us a chance to win another World Championship."

And Manning did just that.

Manning played four seasons with the Broncos. The Broncos made two Super Bowl trips in those four years, losing one game and winning that World Championship which Bowlen wanted last month against the Carolina Panthers.

Manning said he picked the Broncos back in 2012 because, "This truly is a special football environment and I am glad to be part of it."

Even in 2012, Denver Broncos general manager John Elway said, "I know he's going to play great football. We believe he can play as long as he wants."

It appears that Manning would play four more years until a rough season in 2015. Manning was benched in mid-November after throwing four interceptions against the Kansas City Chiefs. After the game, Manning sat out several weeks with torn plantar fascia in his right foot. Manning returned in the final game of the season, replacing a then-struggling Brock Osweiler, to beat the San Diego Chargers. Manning never looked back, winning playoffs games against the Pittsburgh Steelers and New England Patriots, before winning Super Bowl 50.

See pictures of Manning soaking in the celebration at Super Bowl 50.