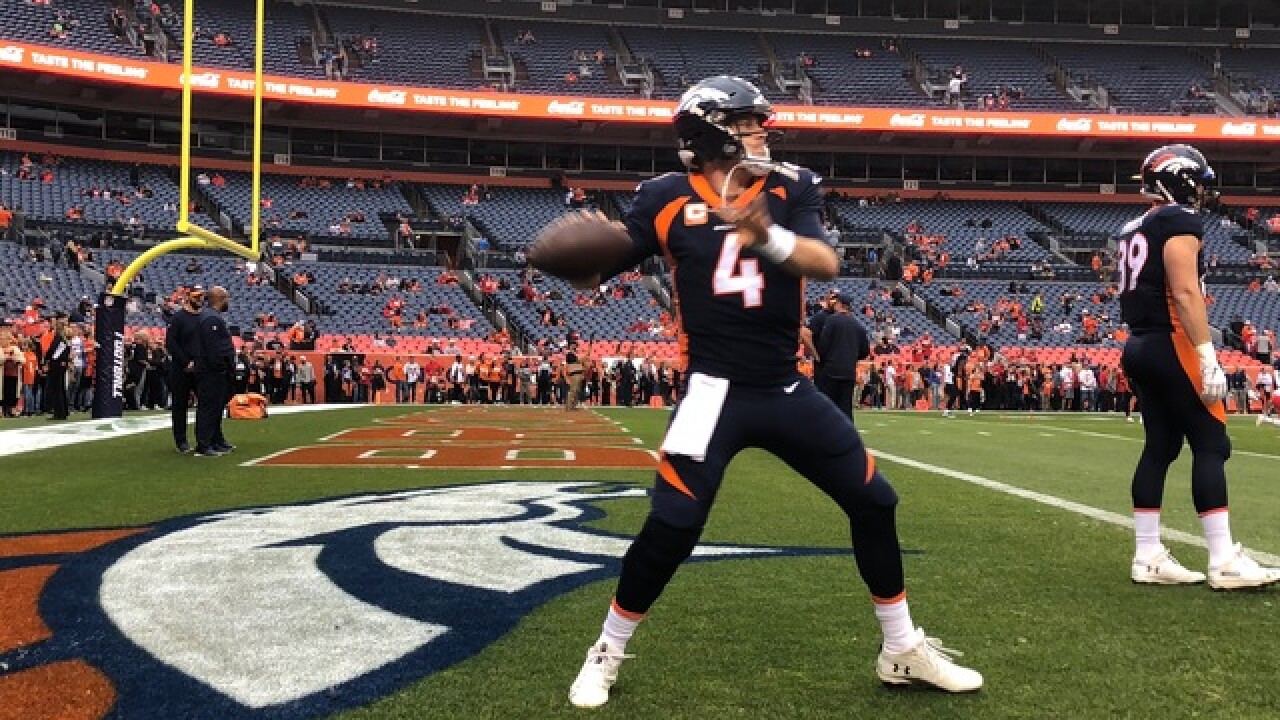 DENVER -- The disappointment lingers the morning after.

Monday created a stage for one of the most satisfying sports days in Colorado history. Instead, the Rockies couldn't hit in Los Angeles, unable to claim the National League West crown. And the Broncos failed to close in Denver.

Two losses -- both the equivalent of eating tinfoil with a side of shards of glass.

The Rockies receive another chance Tuesday in a knockout Wild Card game at Wrigley Field against the Chicago Cubs. Kyle Freeland, Mr. 303, takes the ball. He is 11-1 with a 2.32 ERA over his last 20 starts. Even with Freeland on three days rest for the first time in his career, his teammates believe in him because of his attitude and production.

Broncos quarterback Case Keenum inspires teammates, but his statistics don't match his importance. When we woke up Tuesday, the talk centered on Patrick Mahomes' jump-off-the-screen talent, not Keenum's last-second connection to Demaryius Thomas. As such, the Chiefs remain undefeated -- they have won six straight against Denver and 18 of their last 19 AFC West games -- and the Broncos own a .500 record.

Let's take a look back at why in my Denver7 takeaways from the dramatic 27-23 loss:

Keenum played a near-flawless first half for the first time as a Bronco. He completed 14 of 19 passes for 139 yards. In the second half, he went 7-for-14 for 106 yards. On a potential winning play with time expiring, he overthrew Thomas down the right sideline as Thomas came out of his break slowly. It was a huge miss given the coverage gift. Keenum fits the profile of a leader. But, he has to play better for the Broncos to return to the postseason. His six interceptions rank second in the NFL. Per the Associated Press, Keenum is the first Broncos quarterback with three straight games of 20 attempts and zero touchdown passes since Elway in 1986.

When the Broncos watch the film, I believe they will cringe at their second-to-last series. They took over with 6:27 remaining holding a 23-20 cushion. They went shotgun with multiple wideouts. Phillip Lindsay gained zero yards on first down. Keenum completed a pass to Emmanuel Sanders for no yards, and the Chiefs sacked Keenum on third down. The Broncos defense desperately needed a breather and they received: three plays, zero yards, 1 minute, 34 seconds drained from the clock. OK, it's going to be all right. Marquette King, whose job is in jeopardy because of a potential injury and ineffectiveness, delivered a 35-yard punt. Um, maybe not.

For the better part of 50 minutes, the Broncos designed the perfect plan to thwart Mahomes, then they couldn't stop a fourth-quarter drive with a second-and-30 situation. Mahomes was a mess of miscommunications and errant passes for three quarters. Then the Broncos could not finish. It was akin to the closer blowing the game in baseball. The replay that hurts and haunts. On third-and-7 from the 46-yard line on the Chiefs final drive, the play clock appeared to hit zero before the snap. The Broncos were later told by an official that the call was botched. That's not why the Broncos lost, but it helped. On the play, Mahomes found backup tight end Demetrius Harris down the right sideline for a 35-yard gain. Shaquil Barrett lost him in coverage. He owned up to the mistake. But it raised the question of why he was repeatedly in coverage as an outside linebacker. I do wonder if safety Su'a Cravens could help if he gets healthy.

The loss overshadowed a positive development. The Broncos continue to run the ball well. The Broncos finished with 159 yards rushing. More salient, Lindsay and Royce Freeman combined for 136 yards and two touchdowns on 20 carries. The 6.8 yards a pop is staggering. In a passing league, Denver might have to win with a ground attack.

The result remains painful. However, the Broncos might have found their third cornerback. Adam Jones played 53 of 78 snaps, looking decent throughout. Depth remains an issue as Isaac Yiadom played five snaps.

7) King is on bubble

Marquette King ranks 21st in gross average at 44.05. He has seven kicks inside the 20, placing him 11th. It's not good enough. King is hardly the reason the Broncos are 2-2, but Denver has no margin for error. The Broncos go on the road against the Jets, a beatable opponent. Denver, however, is 1-8 in its last nine road games, and cannot afford to lose the field position game because of a clumsy punt.