Broncos fall to Chiefs as KC rallies for win 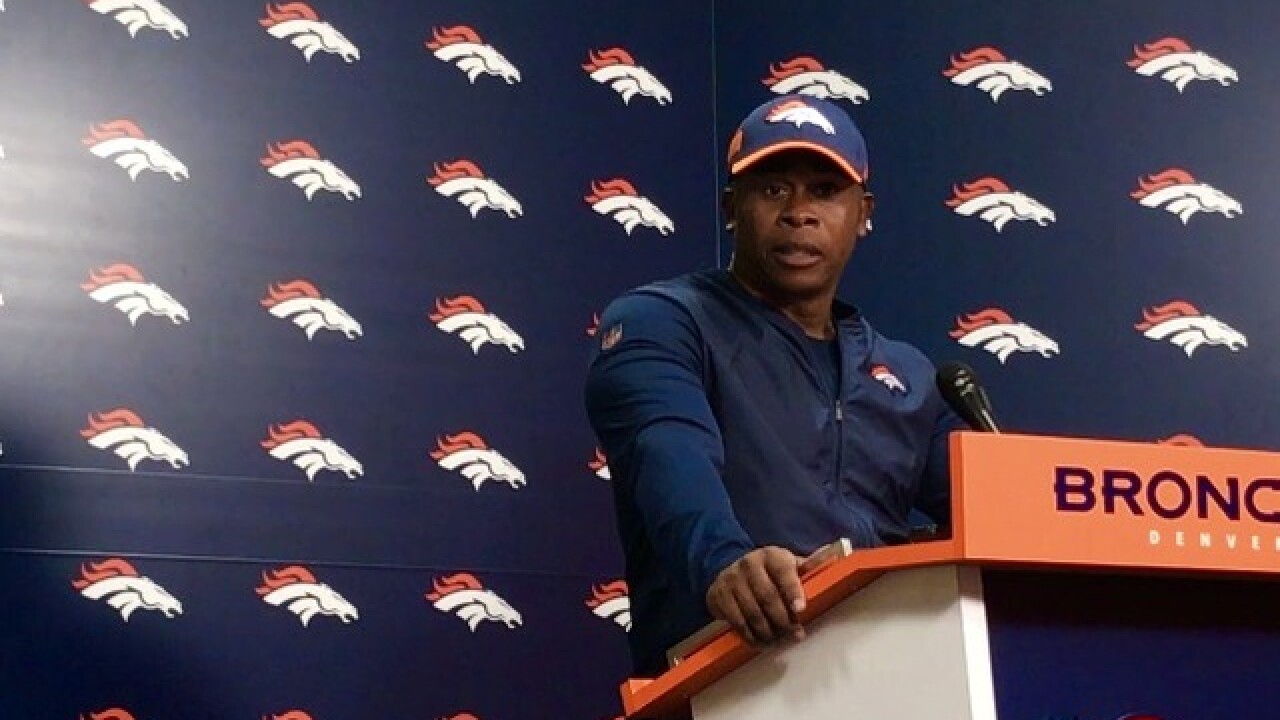 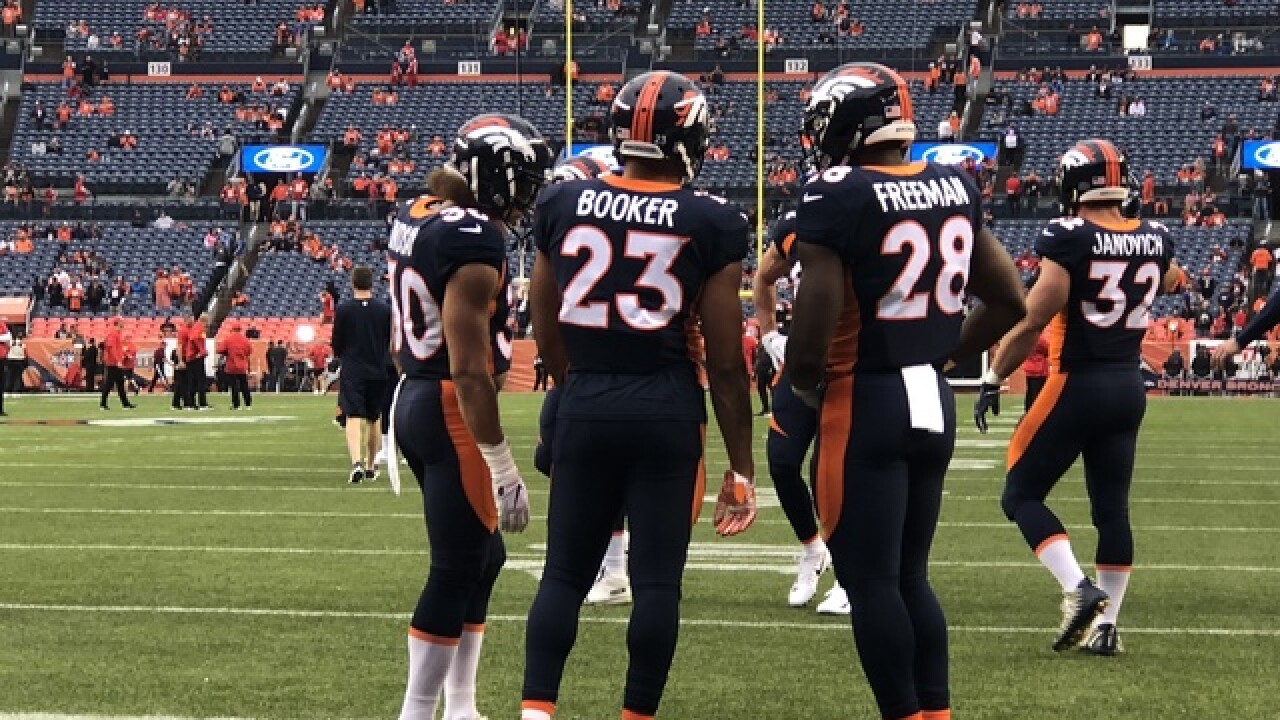 AFC West games are played in octagons. For a team to rebuild its image, to take strides on the road to redemption, it requires rolled-up sleeves, bare knuckles and shots of Pepto-Bismol. They slugged their way to a 10-point lead in the second half. It amounted to a tease in the Broncos' heart-in-a-blender 27-23 loss at Mile High Stadium.

"We just didn't finish," said cornerback Chris Harris Jr., who required two IVs to make it through the game. "We just let them off the hook."

The Broncos knew they weren't equipped to run a relay race with a Chiefs team attempting to become only the third in NFL history to score at least 38 points in each of its first four games. Instead of Air Raid, they went Old School, relying on a ground attack that would have made Terrell Davis smile in delight. The Broncos totaled 159 rushing yards, leading 23-20 with two minutes left.

And it still wasn't enough. After an awful 35-yard punt by Marquette King following a three-and-out -- "He has to perform better. He has to flip the field," said coach Vance Joseph --  the Chiefs took over and watched Patrick Mahomes make everyone else invisible. He completed passes with both arms. He bought time on scrambles, and when required most, he connected on back-to-back completions for 57 yards deep into the fourth quarter. The last completion, a 35-yarder to tight end Demetrius Harris, drew the sellout crowd's ire.

The scoreboard showed the play clock at zero before Mahomes took the snap. It was not a reviewable play.

"The ref came into the hotel and said the ref whose job it is missed it. One of our players said, 'If that's his one job how did he miss it?'^ linebacker Brandon Marshall said. "How do you miss that? It's crazy."

Shaquil Barrett pointed the finger in the mirror. He insisted Harris should have never been open.

"If I had just done my job, we’ll never know how this game would’ve turned out," Barrett said. "This is going to hurt for a while because I feel like it was my fault for not sticking my guy."

Moments later, running back Kareem Hunt chugged in from 4 yards out as the Chiefs secured a 27-23 lead with 1:39 remaining. With the alarms blaring, Kansas City sewed together back-to-back touchdown drives. It amounted to Sea Breeze in an open wound. One play did not determine the outcome. And the Broncos were quick to praise Mahomes, who completed 21 of 30 passes in the second half. But the timing of the mistake became amplified with the outcome.

"I asked the official and he said he looked up, it was '0' and the ball was gone," Joseph said. "I disagree. I disagree."

The Broncos put together an admirable final drive, including a long catch from tight end Jeff Heuerman with under 30 seconds remaining. But Case Keenum failed to connect to a streaking open Demaryius Thomas with 16 seconds left, dousing the rally.

"There's a few plays, that one especially," Keenum said, "that I will lose sleep over. It's tough. It stings."

The Broncos fell to 2-2, anchored by effort, but undermined by the results.

"I never doubted us," Mahomes said. "This is a good confidence booster going into the rest of the season."

The Broncos invested in smarts after the 5-11 dumpster fire. They drafted players with attitude and aptitude. They added two new offensive line coaches. Forget a chip, these guys had the entire bag of Fritos on their shoulders. It paid dividends in a crucial second half juncture.

Momentum shifted, if only briefly, with the game's first turnover. After his best first half as a Bronco, Keenum slightly under threw a lob pass to Heuerman, who had the ball wrestled away by Chiefs defensive back Eric Murray.

The Broncos defenders, who spent time extolling the crowd and each other on the sideline, responded by throwing down the sawdust. Top draft pick Bradley Chubb made the Chiefs' line jumpy, resulting in a penalty and pressure. Mahomes, a mess of miscommunication and misfires for long stretches early, finished the drive fleeing the pocket and remaining inaccurate. Change-of-possession points sabotaged the Broncos last season. Monday, it set up a score.

The Broncos found their identity -- as a running team in a passing league. They plodded, plowed and pushed for 80 yards, taking a 20-13 lead with 2:05 remaining in the third. Of the nine plays, seven came on the ground. Rookie Phillip Lindsay provided the exclamation point with a 1-yard plunge rewarding the work of the grunts up front by handing the ball to Garett Bolles to spike. Keenum admitted last week the Broncos were determined to keep Kansas City's offense off the field. Through three quarters, the Broncos had 153 yards rushing on 19 attempts, an eye-opening 8.1 yards per clip.

Lindsay and Royce Freeman made an impression and history. They became the first pair of Broncos rookies to total 60 yards rushing and one touchdown in the same game.

Following a 46-yard field goal by Brandon McManus that widened the margin to 23-13, the onus fell on the defense to show elasticity without snapping. They broke under the pounding from Hunt and Mahomes' magic wand. The Chiefs methodically moved down the field with Hunt powering the machine. A 12-play jaunt gobbled the clock and shaved the Broncos' lead to 23-20.

Denver needed a drive. Revived from the exhaustive scoring drive by the offense, the Chiefs D produced a three-and-out with 4:45 remaining. King compounded the sputter with his worst punt of the night, a 35-yarder that tumbled out of bounds. His job is potentially in jeopardy after his latest disappointing performance.

The blueprint existed to undercut the Chiefs, tucked away in a briefcase in a dim lit room. It begins with throwing the first punch to the windpipe. The Broncos cranked back their right arm and delivered a jab to the midsection. Looking to make a statement, Denver drove 51 yards on seven plays, gashing the Chiefs on their first three plays for 46 yards. A drop by Thomas stalled the march, leading to a Brandon McManus 42-yard field goal. It represented the Broncos' 24th first quarter point, less than half of Kansas City's total.

The need for continued flow became obvious with the Chiefs' first drive. They wasted no time tying the score by relying on their forgotten star, Kareem Hunt. He converted a gutsy fourth-and-1 from Kansas City's own 34-yard line, and plowed over Justin Simmons on a 27-yard reception. And yet, there was hope as Bradley Roby deflected a third-down pass to Sammy Watkins.

Harrison Butker drilled a 33-yard field goal, marking the first time this season the Chiefs failed to score a touchdown on their opening drive. The Chiefs offense demands LifeLock security to prevent them from stealing your will, if not your identity.

Kansas City eschewed the quick strike in the second quarter with a 12-play, 89-yard march. What made it disheartening is that Denver missed tackles, leading to a 45-yard run by Hunt. And a third-down touchdown resulted from miscommunication as Mahomes raced in for a score from 8 yards.

It represented a watershed moment for the Broncos. They showed resolve, toughness and a willingness not to play favorites. They leaned on the rookies: Courtland Sutton turned a 50-50 ball into an 80-20 proposition, his basketball skills revealed on a 42-yard reception (He forced an interference call in the end zone on the drive that led to the Broncos second touchdown). Lindsay added an 18-yard burst, and Freeman showed patience on a sweep, waiting to put his foot in the ground before heading south and through jersey tackles for an 18-yard score.

Tied 10-all with 6:37 left in the second quarter amounted to a victory, and followed the strategy.

The Broncos made Mahomes, who had the second highest quarterback rating through four career starts, look uncomfortable. The defensive backs held private meetings, watched additional film. It paid off with the team's best first half. Mahomes appeared rushed, unable to audible and off target. He completed 7 of 15 first-half passes for 65 yards, while failing to deliver a touchdown for the first time this season. The Broncos, meanwhile, received the type of Keenum outing they penciled in when they signed him in March. He took chances while taking care of the ball, completing 14 of 19 passes in the opening 30 minutes for 139 yards, easily his best first half of the season.

In the end, the pain was real. The Broncos lost because they couldn't put together one more offensive drive -- they went three wide, going away from the run -- and couldn't stop Mahomes. He was the best player on the field in the fourth quarter.

"He had that second-and-30, and I am thinking there ain't no way they'd be able to get this.' And they did," lamented Von Miller, who failed to register a sack for the second straight game. "Patrick Mahomes is a great quarterback."

There was nowhere to run or hide as the time ticked away. The Broncos lost their first home game, their losing streak reaching six against the Chiefs. There's no shame in losing to the Ravens and Chiefs, both considered AFC title contenders. But fall to the New York Jets, and this game will be viewed as a trigger mechanism rather than a painful Monday in a vacuum.

"Obviously, you hate not winning. But we are building our identity as a team," said Keenum, who finished 21 of 33 for 245 yards and no touchdowns. "We are building character and grit. Everybody is hurting. But there's no quit at all in that locker room. We will learn from this."