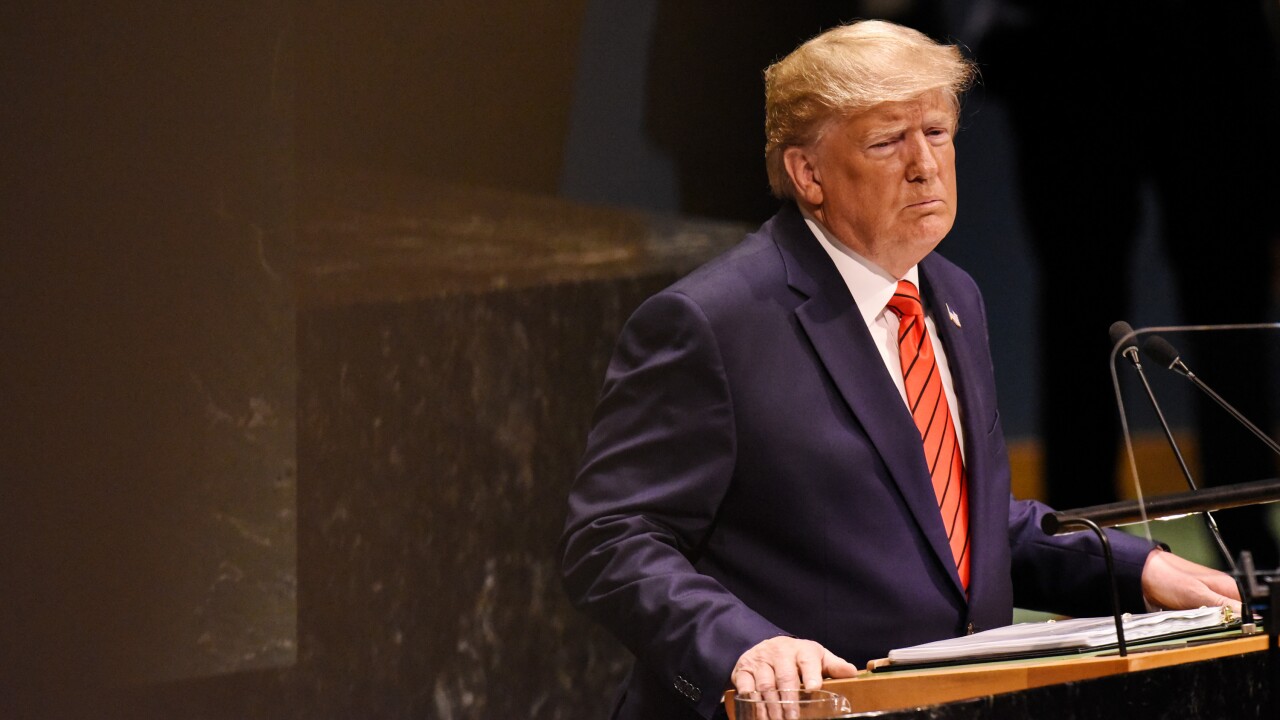 Copyright 2019 by Getty Images
Stephanie Keith/Getty Images
NEW YORK, NY - SEPTEMBER 24: U.S. President Donald Trump speaks at the United Nations (U.N.) General Assembly at UN headquarters on September 24, 2019 in New York City. World leaders are gathered for the 74th session of the UN amid a warning by Secretary-General Antonio Guterres in his address yesterday of the looming risk of a world splitting between the two largest economies - the U.S. and China. (Photo by Stephanie Keith/Getty Images) 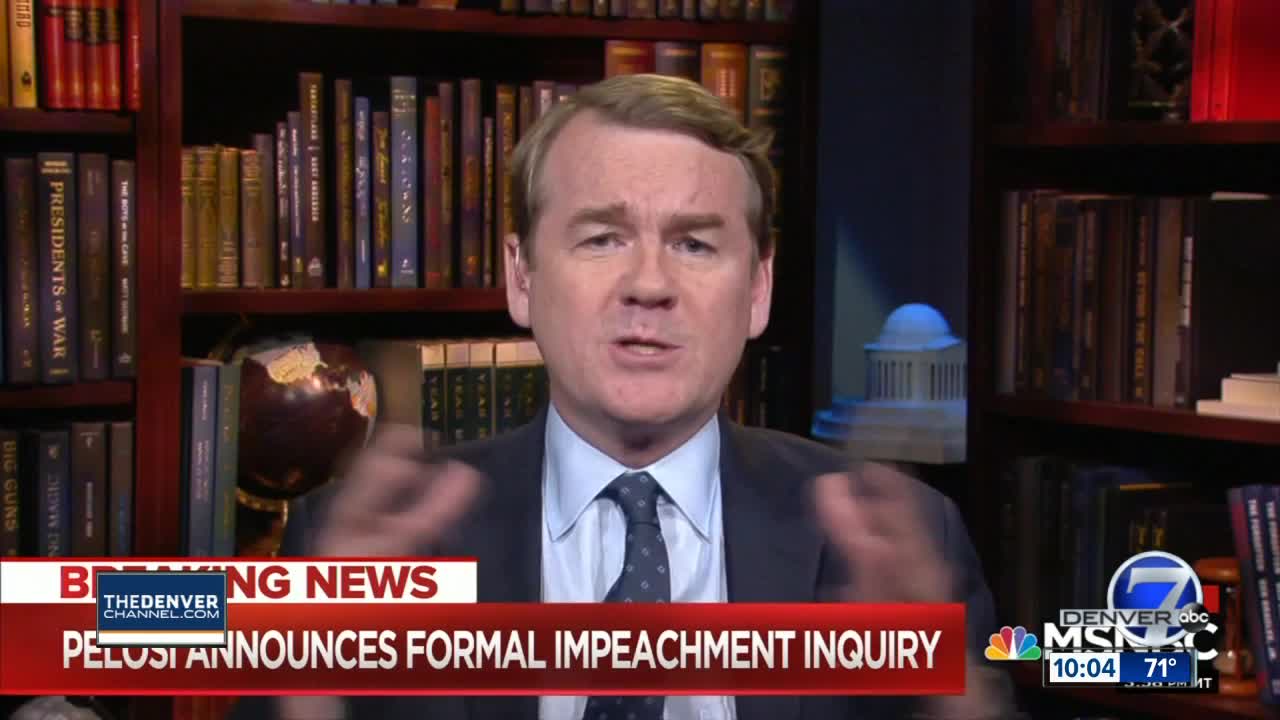 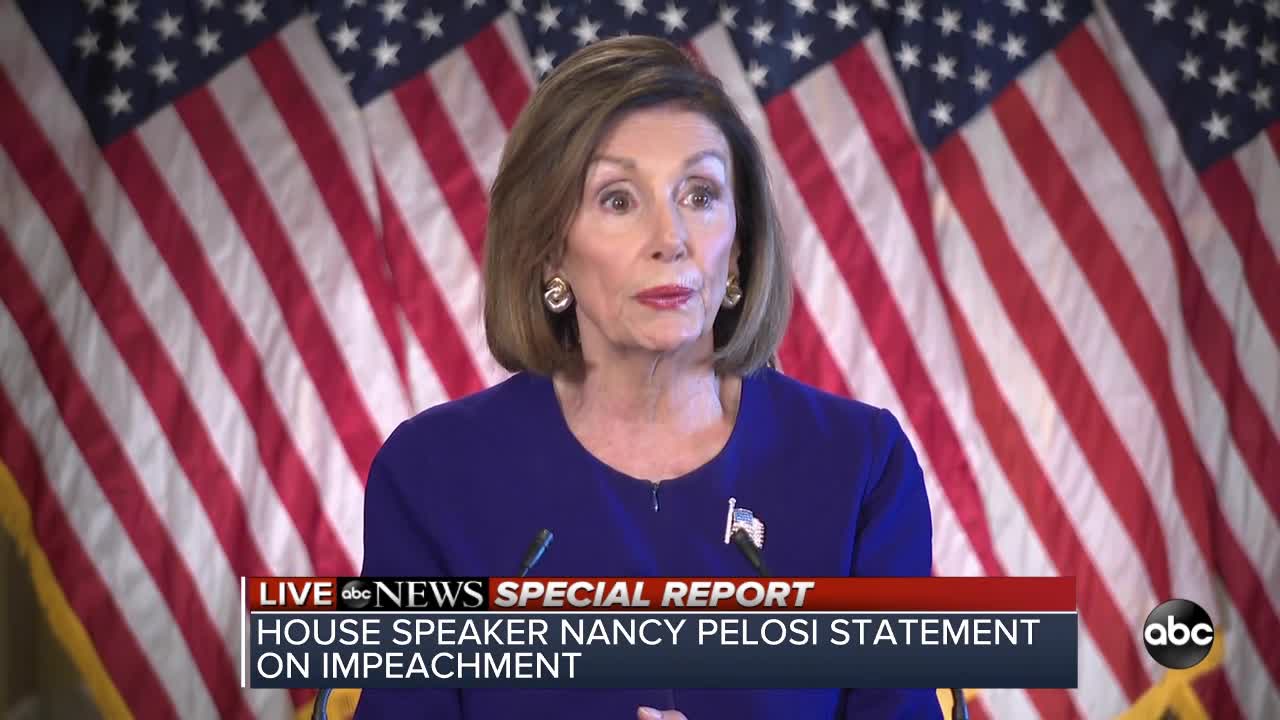 "The actions of the Trump presidency revealed the dishonorable fact of the President's betrayal of his oath of office, betrayal of our national security and betrayal of the integrity of our elections," Pelosi said in her announcement of the inquiry.

Pelosi said the six House committee chairmen would continue investigations under the new impeachment inquiry umbrella. President Trump admitted Tuesday he had delayed aid to Ukraine ahead of a call to the nation’s president in which he asked for the country to investigate former Vice President Joe Biden’s son’s work for a Ukrainian company.

Reps. Diana DeGette, Joe Neguse and Jason Crow had previously committed to supporting impeachment, but Rep. Ed Perlmutter committed to Pelosi’s new full inquiry on Tuesday – the final House Democrat from Colorado to fully do so.

“I support the formal impeachment inquiry announced by the Speaker,” Perlmutter said in a statement. “In light of what we know from the investigations so far, and particularly after recent developments dealing with the whistleblower complaint and Ukraine, it is time to bring all six committees under the umbrella of a formal impeachment inquiry and accelerate the House’s investigations to ensure the Constitution, the rule of law and our national security are protected and defended.”

He had previously said on Aug. 1 that he didn’t believe the House had its “best case ready yet,” and cited court cases, House committee investigations and “the improbability of getting two-thirds vote of the Senate in order to convict looms large.”

DeGette, who was the first member of Congress from Colorado to back a full impeachment inquiry of the president when she did so in April after the release of the Mueller report, said that the President’s Tuesday admission was another reason he should face impeachment.

“The president’s own admission that he urged a foreign power to intervene in our election process constitutes an impeachable offense,” DeGette said in a statement. “We need to gather the evidence and complete this impeachment inquiry given the threat this poses to our national security.”

Neguse, a member of the House Judiciary Committee, said in May after the release of the Mueller report that he supported impeachment. He said Tuesday that the recent revelations about the phone call with Ukraine’s president and subsequent blocking of a whistleblower complaint about the call by the director of national intelligence put more pressure on calls for impeachment.

“The President has shown complete disregard for the law, the office of the Presidency and our Constitution. In the last week, we learned that he pressured Ukrainian officials to launch an investigation into former Vice President Joe Biden. There is no question that inviting political interference in our democratic process is an impeachable offense,” Neguse said in a statement. “…Donald Trump has abused the Presidency and the law. We must forward with impeachment immediately.”

Crow, who first called for an impeachment inquiry in late July, penned an op-ed in The Washington Post Monday with six other freshmen Democrats who have experience with national security in which they said if the latest allegations involving Trump and Ukraine were true, he should be impeached.

Sen. Michael Bennet, D-Colo., said for the first time Tuesday he supports the impeachment inquiry after previously opposing one just two months ago.

“I support the decision to open an impeachment inquiry. As a member of the Senate Select Committee on Intelligence, I will continue to exercise my role in conducting oversight and uncovering the facts,” Bennet said. “We need to ensure that the Congress has access to the whistleblower’s complaint and that the whistleblower is protected to the full extent of the law.”

Bennet discussed what he believes should and will happen next with MSNBC’s Chuck Todd after Pelosi’s announcement. He and his fellow senators passed a resolution by unanimous consent just before Pelosi’s announcement requiring the whistleblower’s complaint to be transmitted to the congressional intelligence committees as required by law. That came after Trump tweeted that he would release a transcript of the call with the Ukrainian president – which was not moving for most.

“Whether the administration will comply with that is a question,” he said.

He said he didn’t believe the nation’s founders would be happy with the current state of the separation of governmental powers and that members of Congress would be told they should be exercising their legislative oversight “in a judicious and thoughtful way.”

“It’s very important for us to get through this moment – not just with Donald Trump as a one-term president – but with an opportunity to reintroduce the American people to why our institutions are so important and why Donald Trump and Trumpism generally has been so destructive to this country.”

He said he wouldn’t like Mike Pence as president should Trump be impeached and removed. But he said Trump was “grinding our institutions into smithereens” and asked aloud how “anybody conservative” can support him.

Rep. Doug Lamborn, R-Colo., who has been a staunch supporter of the president’s, slammed the inquiry and claimed the investigation should instead focus on the younger Biden – an investigation that had already gone dormant during the time Biden was vice president, as Bloomberg previously reported.

“Instead of spending their time working on solutions for the American people, Democrats continue to pander to their radical base and put politics before progress,” Lamborn said in a statement. “To call for impeachment before the transcript has been released demonstrates their willingness to disregard reason and facts.”

Sen. Cory Gardner, R-Colo., who is up for re-election next year and is expected to face a strong challenge from whichever Democrat gets the nomination, said he supports the full release of the whistleblower report but not the impeachment inquiry.

“Today the Senate unanimously voiced its support for the full release of the whistleblower report and the Senate Intelligence Committee will be conducting a formal inquiry, which I support,” Gardner said in a statement. “Starting an impeachment inquiry to appease the far-left is something the majority of Americans do not support and will sharply divide the country.”

The Colorado Republican Party, which is chaired by Rep. Ken Buck, R-Colo., issued a statement from its senior party advisor, Don Ytterberg, that also attempted to divide Democratic voters between the party’s progressive side and more-centrist side, as has often been the case from Republican Party operatives in recent months.

“They are putting their political ambition ahead of solving problems for hardworking Coloradans,” he said of the Democratic members from Colorado. “It is clear that Nancy Pelosi has lost control over her caucus and has yielded to the far-left wing of her party.”

Buck did not respond to a request for comment Tuesday or Wednesday but did send a tweet.

“Democrats spent 3 years trying to overturn an election that didn’t go their way,” Buck said. “They wasted $40 million of taxpayer money to find no collusion & no obstruction. Now @SpeakerPelosi’s call for a formal impeachment inquiry is based solely on rumors & hearsay. It’s time to move on.”

Rep. Scott Tipton, R-Colo., issued a statement Wednesday morning saying the impeachment inquiry was "premature" but that he supported the release of the whistleblower complaint.

"The administration is correct to release the full transcript of the phone call in question, the whistleblower complaint and the IG report to the American public as it is important that all the facts be laid on the table for a thorough review. Calls for impeachment at this point are premature, especially considering that many Democrats have been calling for it regardless of the findings of any of their investigations," he said.

“It should not be hard to unequivocally condemn asking a foreign power to interfere in our elections, but we have yet to hear that from Senator Cory Gardner or Colorado Republican Chair Ken Buck,” Carroll said. “If they are so weak that they are afraid to step one toe out of line in the eyes of Donald Trump, then they truly don’t deserve to be in office, and they will answer to the voters in 2020.”

The six House committee investigations will hold hearings before a possible full House vote. In order for a president to be impeached, 218 members of the House would have to vote in favor of the measure. If the president is impeached, the U.S. Senate would have to convict with a two-thirds majority – which is unlikely if Senate Republicans continue to toe the Trump line as most have so far throughout his presidency.

The White House issued a statement late Tuesday containing a misleading statement about Democrats and their legislative process, and catering to Trump’s supporters.

“In a departure from all the work and results of this President, House Democrats have destroyed any chances of legislative progress for the people of this country by continuing to focus all their energy on partisan political attacks,” Press Secretary Stephanie Grisham said in a statement. “Their attacks on the President and his agenda are not only partisan and pathetic, they are in dereliction of their Constitutional duty.”

“The Trump Administration will continue to be vigorous in laying out the facts and standing up for the many forgotten men and women who elected him,” she added.