Bennet: "We need to be smart about how we're running" 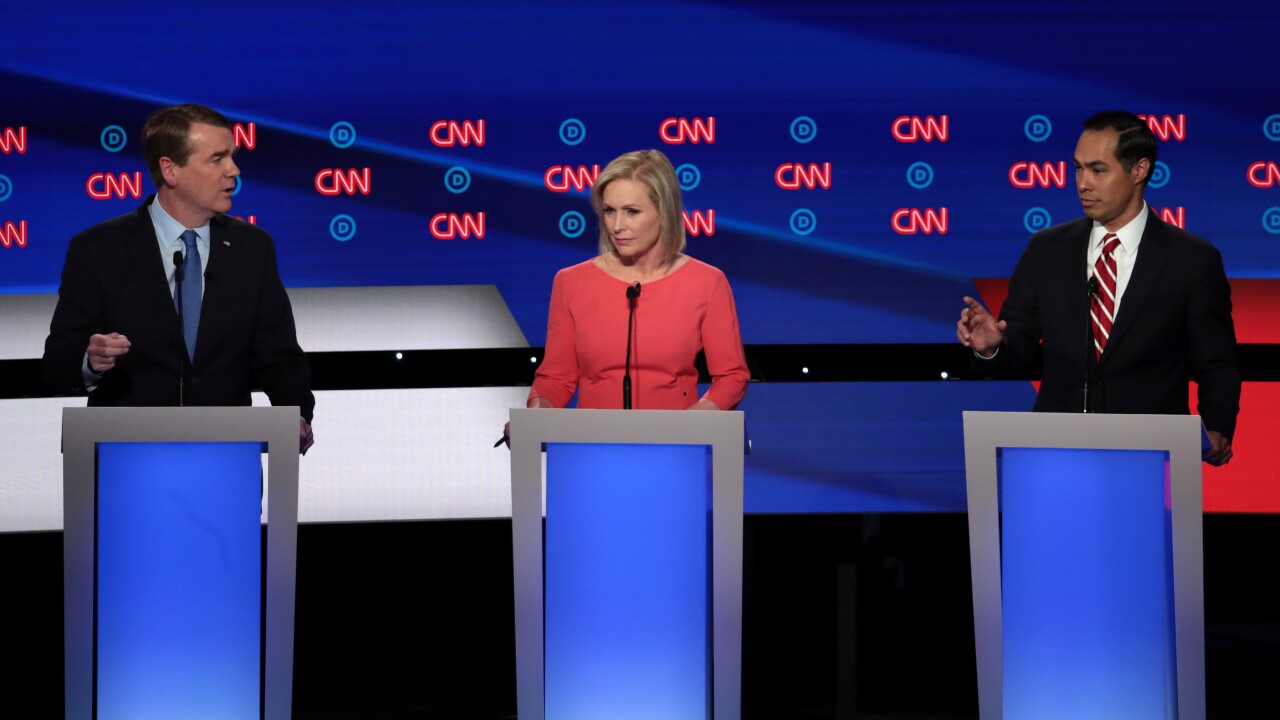 DENVER – U.S. Sen. Michael Bennet, the Democrat from Colorado who is running for president, said at Wednesday’s Democratic debate in Detroit he still wasn’t convinced that pursuing an impeachment inquiry against the president was the right move for Democrats – a day after Rep. Jason Crow became the third Democratic member of Congress from Colorado to support an inquiry.

Several of the 10 Democrats on stage on Wednesday were asked about whether they supported a U.S. House of Representatives impeachment inquiry into the president after the release of the Mueller report and the special counsel’s congressional testimony.

There are at least 116 House Democrats who support an inquiry as of Thursday, including Crow and Colorado’s Reps. Diana DeGette and Joe Neguse, both of whom came out in support of an inquiry earlier this year. But Rep. Ed Perlmutter and Bennet – the remaining two Democrats on Colorado’s congressional delegation – have not committed to an inquiry.

Bennet said during Thursday’s debate that he worries about what might happen should the House impeach Trump, but the Republican-held Senate fail to convict him, as is expected.

“If we go forward here, we need to recognize the very practical reality, which is that we’re four months away – we’ve got the August recess, then we are four months away from the Iowa caucuses,” Bennet said. “And I just want to make sure whatever we do doesn’t end up with an acquittal by Mitch McConnell in the Senate, which it surely would. And then President Trump would be running saying that he had been acquitted by the United States Congress.”

“I believe we have a moral obligation to beat Donald Trump. He has to be a single-term president and we can’t do anything that plays into his hands,” Bennet added. “We need to be smart about how we’re running or we’re going to give him a second term. We can’t do it.”

After Bennet’s response, former HUD Secretary Julian Castro told Bennet that he believed Congress and the Democratic candidates “can walk and chew gum at the same time” and said he believed “folks are making a mistake by not pursuing impeachment.”

Castro went on to say why he believed Trump would use Democrats not pursuing impeachment as a positive talking point during his campaign.

Afterward, Bennet got a chance to respond to Castro’s remarks and seemed to agree with him.

“I don’t disagree with that, you just said it better than I did,” Bennet responded. “Wee have to walk and chew gum at the same time.”

Bennet’s statements put him closer than he had been toward supporting an impeachment inquiry but not in the same boat as the three Colorado members of Congress: DeGette, Neguse and Crow.

Crow’s support of an inquiry is a recent development as well. When Republicans in the House moved to kill a resolution to begin impeachment proceedings on July 17, Crow voted with Republicans and many Democrats in agreeing to table the measure. Both DeGette and Neguse voted against the motion to table and had already come out in favor of impeachment at the time.

But in a blog post on Medium on Tuesday, Crow said he had changed his mind after the recent testimony from Mueller at the House intelligence and judiciary committees.

“I didn’t run for office because I dislike Donald Trump. I ran because I love our country. It’s that same pride in our democracy and respect for our Constitution that fuels my support for an impeachment inquiry,” Crow wrote. “We must complete the work started by Special Counsel Robert Mueller. It’s a solemn responsibility of Congress that the Framers of our Constitution included to protect the rule-of-law.”

The House Judiciary Committee has moved to obtain the grand jury material from Mueller’s investigation and report and plans to enforce subpoenas for some in the White House who have thus far skirted them.

Committee chairman Jerry Nadler, D-N.Y., said the material, if it is given to the committee, could help the House leadership on making a decision on whether to begin an impeachment inquiry, which would start with the judiciary committee.

Neguse, also a freshman Congressman who is a member of the judiciary committee, said in May after Mueller’s full report was released that he supported impeachment.

“The findings detailed in the Special Counsel’s report, and the Administration’s pattern of wholesale obstruction of Congress since the report’s release, make clear that it is time to open an impeachment inquiry,” Neguse said in May.

After the committee moved to obtain the grand jury material, Neguse said: “The committee must have access to all the evidence, and hold the President accountable.”

DeGette was the first Colorado member of Congress to come out in support of the inquiry, when she said in late April that she supported impeachment after the release of the summary of the Mueller report to the attorney general.

“The president’s actions are clearly beneath the high personal, ethical and legal standards our founders envisioned in the executive branch, and, as such, constitute a prima facie case to trigger an impeachment investigation,” she said.

Perlmutter is the lone Democratic on Colorado’s delegation who still has not committed to an inquiry. He voted in favor of tabling the impeachment resolution last month.

Perlmutter said in a statement that he believed the House was holding Trump accountable with its outstanding investigations.

“We are holding this President accountable. I believe, the conduct of President Trump is impeachable in a number of ways, however, the House investigatory process is critical and I don’t believe we have our best case ready yet. There are two big circuit court cases that will open the door to Donald Trump’s tax returns and with Deutsche Bank and whether Russian money came into Trump’s companies in one fashion or another. We need to follow the money. The improbability of getting a two-thirds vote of the Senate in order to convict looms large.”

The National Republican Congressional Committee said Crow was “willing to ignore the will of his constituents” in a statement, pointing to an NBC News/Wall Street Journal poll from mid-July showing that 21% of voters support impeachment hearings.

But despite him saying he supported an inquiry, Crow, like Perlmutter, also hinted that the other congressional actions that are aimed at investigating the president and his cohorts could prove a fruitful effort ahead of possible impeachment votes.

“Let me be clear: impeachment must be the last course of action, not the first. We must be deliberate about the inquiry process and give the American people full confidence in the process and the ultimate decision,” Crow said.