Denver's March for Our Lives is Saturday. Here's everything you need to know

The what, when, where of the march in Denver 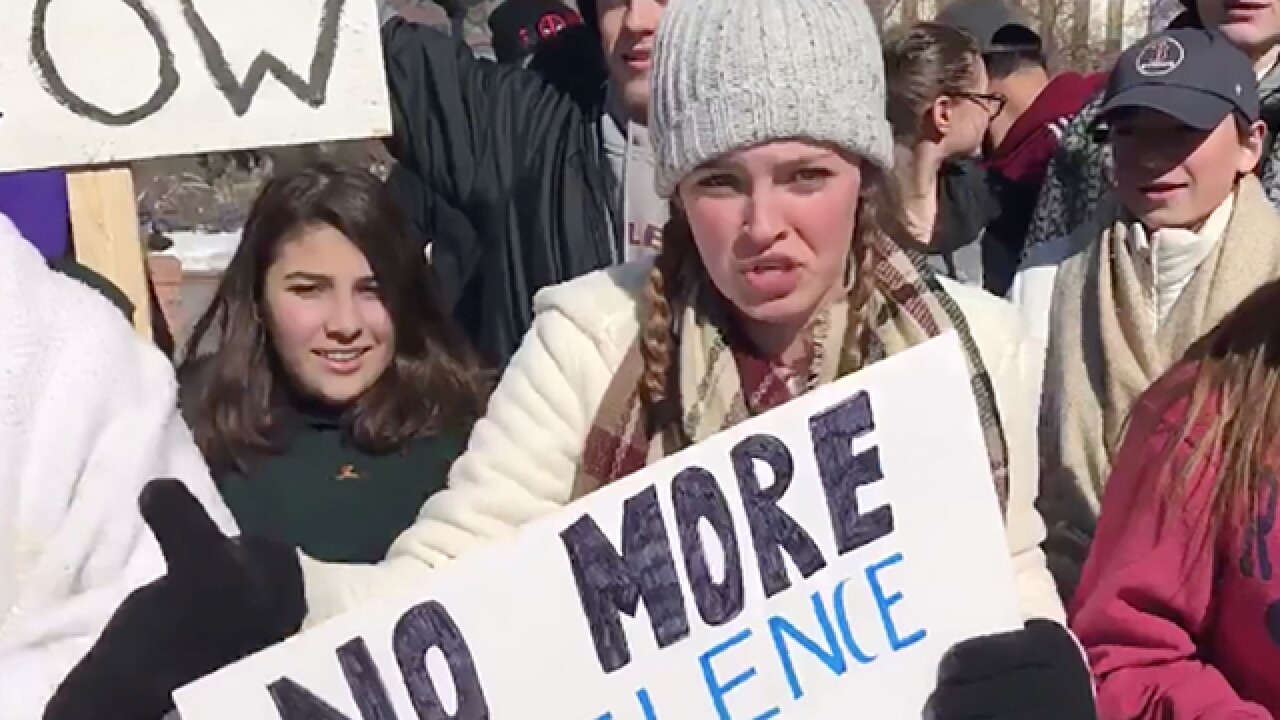 Copyright 2018 Scripps Media, Inc. All rights reserved. This material may not be published, broadcast, rewritten, or redistributed.
<p>A group of students from Littleton High School held a protest Wednesday morning demanding action—with dozens saying they shouldn’t have to fear going to school.</p>

DENVER – Thousands of Colorado students, their parents as well as those who long ago left the classroom, will march Saturday in Denver calling for an end to school mass shootings by demanding stronger gun regulations.

I’ve heard about the march, but I don’t know exactly what it’s all about or why Denver is participating

Denver’s March for Our Lives is just one of the more than 800 sister marches taking place worldwide on Saturday, March 24.

The movement, started by the survivors of the Marjory Stoneman Douglas High School massacre in Parkland, Florida, has one goal: To demand that the lives and safety of U.S. students become a priority, so that gun violence and mass shootings in schools across the country end once and for all.

On Valentine’s Day, 17 people – the majority of them students – were allegedly gunned down by 19-year-old Nikolas Cruz, who had been expelled from the school the year prior.

Cruz used an AR-15 style-rifle in the massacre and had multiple magazines on him which he was able to obtain legally.

OK, so when does the Denver march start?

The Denver march, officially billed as March of Our Lives – Colorado, will take place at Denver’s Civic Center Park and is scheduled to start at 2 p.m. with a rally that should last up to an hour before the march begins. Organizers have advised that students wanting to participate in the day’s events arrive early.

The March for our Lives Colorado event is set to end by 5 p.m., according to the local movement’s Facebook event page.

Nearly 26,000 people have shown interest in participating in Denver’s March for Our Lives. More than 10,000 people are expected to participate.

Wow. How will that affect traffic downtown this Saturday?

If you have business in downtown Denver over the weekend and want to avoid the crowds, you might want to do what you need to do as early as you possibly can.

After the rally, marchers will head north into downtown until they reach Welton Street at 15th Street, at which point they will turn east until the reach 18th Street. From there, they will go down Broadway and come back to Civic Center Park.

Expects those roads to be closed for much of the afternoon.

Our partners at the Denver Post have created this Google Map to help you see the route the marchers will take:

I ride the bus and/or take other forms of public transportation. How will the march affect me?

The Regional Transportation District (RTD) is already planning ahead and has allocated extra buses and light rail trains should they be needed as marchers arrive to downtown Denver.

If you’d like to know how your bus and/or light rail route will be affected, check out the schedule on RTD’s website here.

If you’re planning on participating but don’t want to hop in your car or take the city’s public transportation, don’t fret: Lyft is offering up to $1.5 million in free rides in solidarity with those taking part in the March for Our Lives.

To claim your free ride, you must RSVP by clicking here.

On Friday, March 23, ride codes will be distributed. If you forget to RSVP, ride codes to the marches will be available at http://www.lyft.com/MFOL. Once you have received a code, enter it in the ‘promos’ tab of your Lyft app.

For the code to work, you must enter the official March for Our Lives rally point as your destination.

Good to know. Just one other question: How’s the weather going to look for Saturday?

Mostly sunny to party cloudy skies are expected in the forecast for Saturday in Denver. The high in Denver during the March for Our Lives will be 69 degrees. Winds are expected to pick up as the day goes by, ultimately reaching speeds between 15 to 20 mph.

So perhaps bring water, your sunglasses and don’t forget to wear sunscreen.

OK. Who will be speaking at the March for Our Lives event in Denver?

There will be a total of 11 speakers scheduled to speak during the rally at Denver March for Our Lives event, according to our partners at the Denver Post:

What else do I need to know if I want to talk about this issue with my friends and family?

Saturday’s rally in Denver isn’t the only one taking place in Colorado. Events are also planned in Colorado Springs and Pueblo. For more information on those events, click here.

The March for Our Lives in Denver hasn't been the only march or protest students across the state (and the country) have participated in.

A month ago, on Feb. 21 – a week after the deadly massacre in Parkland, Florida – students from the Denver metro area walked out of schools and held protests in solidarity with other students nationwide, to call for stricter gun regulations and protections in their schools.

Between now and end, several students have been arrested in Colorado for making school threats in the wake of the Florida high school shooting.

Activists and students won’t stop at the March for Our Lives. Another nationwide event, billed as the National School Walkout, will be taking place on April 20 at 10 a.m. – on the 19th anniversary of the Columbine High School massacre – to call on Congress to act on stronger firearm regulations.

Oh, and if you're afraid that you'll be punished for participating, six Colorado colleges have reassured students they won’t be penalized during the admissions process for walking out or participating in the nationwide protests.

Safety, effects of student protests discussed ahead of planned walkouts in Colorado