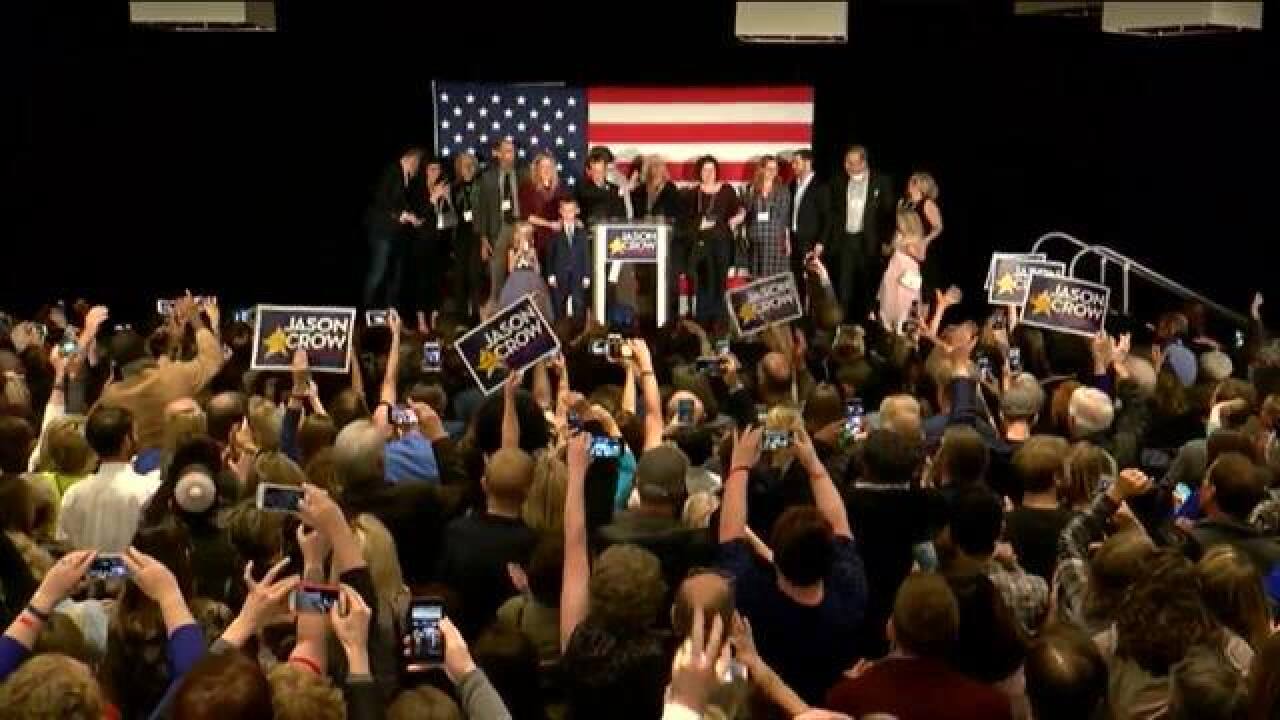 Copyright 2018 Scripps Media, Inc. All rights reserved. This material may not be published, broadcast, rewritten, or redistributed.
<p>Colorado Democrats have flipped control of the state Senate, giving the party a trifecta of Statehouse control with the historic victory of U.S. Rep. Jared Polis as the nation's first openly gay governor and a sweep of top statewide offices.</p>

DENVER (AP) — Colorado Democrats have flipped control of the state Senate, giving the party a trifecta of Statehouse control with the historic victory of U.S. Rep. Jared Polis as the nation's first openly gay governor and a sweep of top statewide offices.

"It's straightforward where I intend to start: Equal pay for equal work. Paid family leave. Closing the wage gap between men and women. It's about equality and an economy that works for everyone," said Rep. Jesse Danielson, who won one of the key Senate races in suburban Jefferson County.

Results were still trickling in, but Democrats were poised to take a two-seat majority in the state Senate, erasing a one-vote GOP edge. In the state House, Democrats looked to increase their comfortable majority. Democrats also captured the GOP-held positions of secretary of state, attorney general and state treasurer.

Colorado was dubbed a "hate state" when voters in 1992 approved a ban on laws that protected gays from discrimination. The U.S. Supreme Court later struck it down as unconstitutional. After years of struggle, civil unions were legalized in 2013, and gay marriage in 2014.

This year, the U.S. Supreme Court partially upheld the arguments of a Colorado baker who refused to make a wedding cake for a gay couple on religious grounds. Jack Phillips, owner of the Masterpiece Cakeshop, has sued the state again for opposing his refusal to bake a cake celebrating a gender transition.

On social media, some Colorado residents discussed voting for Polis without knowing he is gay with a partner and two children.

"We went from a state where our elected officials struggled to provide even basic rights to same-sex couples to a state where a gay man ran for governor and his sexual orientation wasn't discussed as a political liability," The Denver Post wrote in an editorial late Tuesday.

Kayla DeShon, an independent voter from the south Denver suburb of Highlands Ranch, joyfully agreed. The 29-year-old said she voted for Polis because of his commitment to universal health care and defense of insurance coverage of pre-existing conditions. She has an autistic child.

"I did not know he is gay. I found out afterward — it was an added bonus," DeShon said. "Health care and education are important to me as a mom. And so is climate change. So I made an educated decision.

"And I do think that it doesn't matter," she said. "We're moving toward a state of equality where people and politicians don't have to state their sexual preference or their gender."

More than 2.4 million Colorado residents voted in an election whose top themes included health care policy and President Donald Trump. One in four residents are covered by Medicaid, but those in vast areas of rural Colorado pay some of the nation's highest health insurance premiums and have only one provider.

Democratic lawmakers pledged to work closely with Polis on the issue. Also on the 2019 agenda: Preschool, kindergarten and public education funding; transportation; restrictions on guns; and adoption of a workplace harassment policy for a Statehouse roiled this year by sexual and workplace misconduct allegations.

Senate Republicans this year rejected "red flag" legislation, introduced after the Parkland, Florida, school shooting and designed to remove guns from those who pose a threat to themselves or others.

It's a priority next year for Democrat Tom Sullivan, who was elected to the state House. Sullivan's son, Alex, was killed by a gunman as he celebrated his 27th birthday in an Aurora movie theater in 2012. Twelve people in all were killed and 70 wounded.

"A protection order is the first thing," Sullivan said Wednesday of his legislative priorities. "We have to address mental health issues. The work really begins for us now."

For AP's complete coverage of the U.S. midterm elections: http://apne.ws/APPolitics