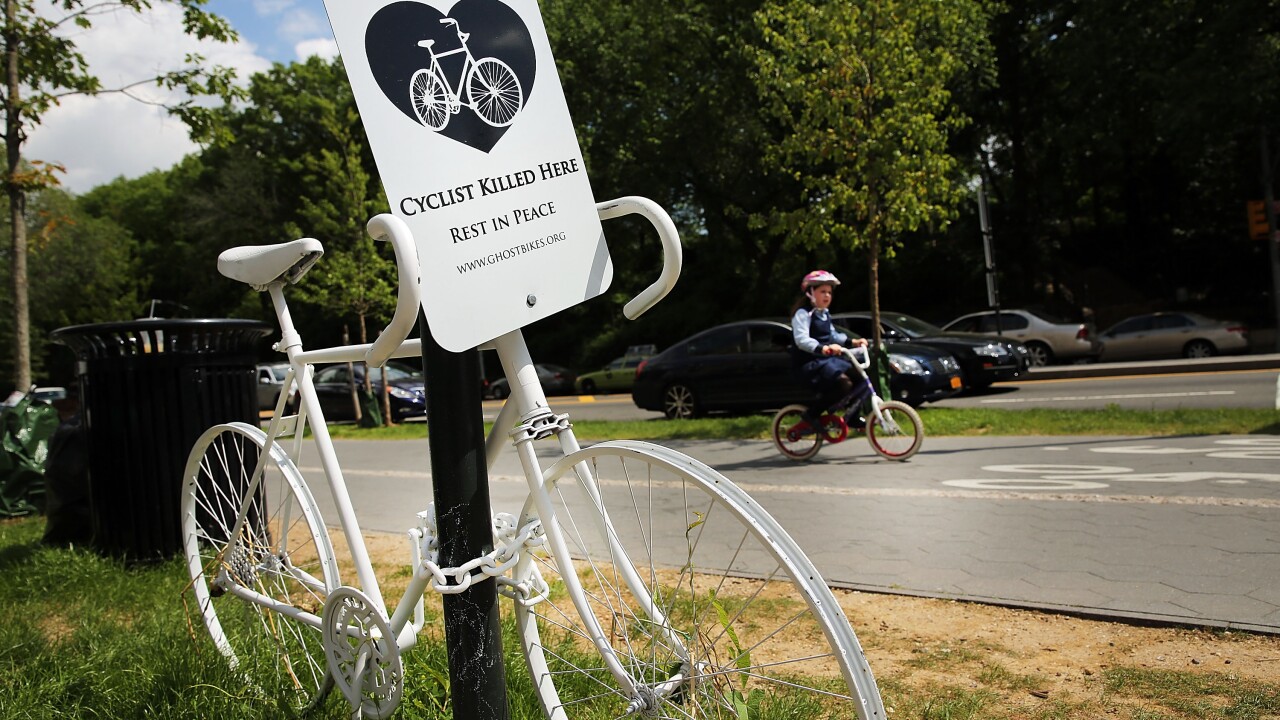 Copyright Getty Images. All Rights Reserved.
Spencer Platt/Getty Images
NEW YORK, NY - MAY 30: A "Ghost Bike", which are used to signify a fatality involving a bicycle, is viewed along a street on May 30, 2014 in the Brooklyn borough of New York City. New York City's Mayor Bill de Blasio has highlighted the high numbers of pedestrian and bicycle deaths in the city and vowed to cut them drastically. His Vision Zero project includes legislation bringing broad changes to traffic laws throughout the city. Twenty mph "slow zones"; a ban on "stunt behavior" on motorcycles and strict penalties for drivers failing to yield to a bicyclist or pedestrian who has the right of way are just some of the measures the new mayor looks to implement. New York City police data shows there were 156 fatalities in 2013, an increase from 152 in 2012 and 142 in 2011. (Photo by Spencer Platt/Getty Images) 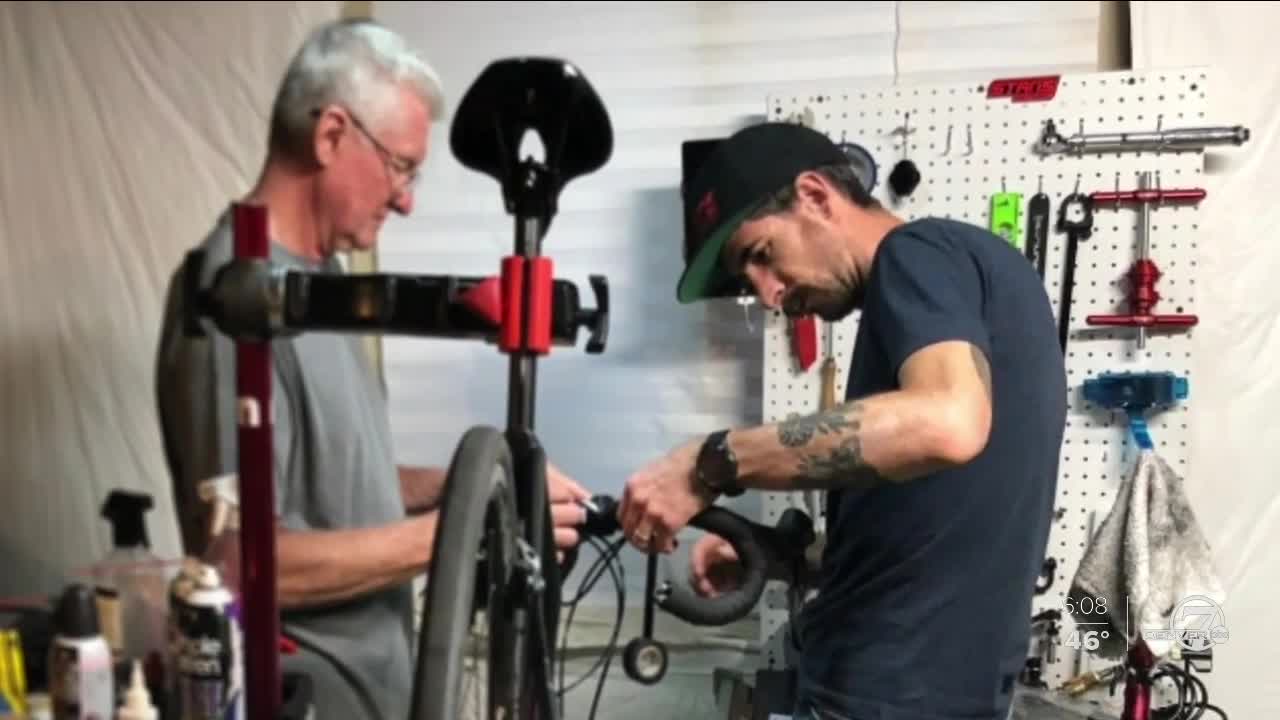 DENVER -- A bill to offer more protections for bicyclists has passed through the Colorado state legislature and is now on the Governor’s desk.

Senate Bill 61 defines bike lanes in Colorado law, and requires drivers to yield to cyclists in bike lanes and allows law enforcement to ticket people who block bike lanes. It’s the only bike-specific bill to be introduced so far this legislative session to address the number of injuries and deaths happening on Colorado roads.

“It’s a pretty straightforward bill. It basically says that if the cyclist is riding in the bike lane and gets hit by a car, it’s not the cyclist’s fault,” said Senator Mike Foote, D-Boulder, one of the bill’s co-sponsors.

Under current Colorado law, cyclists must follow the same rules as vehicles. They can also receive citations for breaking the law and be fined.

There has been some confusion, however, for who has the right-of-way when a cyclist is going straight but a car heading the same direction next to it is turning in either direction. There have been instances in the state where a cyclist was hit by a car and badly injured and then they were cited instead of the driver.

“Unfortunately, around the state there has been a little bit of disagreement about the application of the current law and who should be at fault for (crashes), and so we just wanted to be clear from the state legislative point that the cyclist is not at fault if they get hit while they’re in the bike lane,” Sen. Foote said.

Supporters of the bill say it offers clarity for law enforcement officers on how to write tickets and who to cite in the case of an accident between a cyclist and a driver.

During an emotional committee testimony, cyclist after cyclist who has either been hit while riding their bicycle or who knows someone who has been injured, testified in favor of the bill.

Teri Vogel, whose husband Edward “Chuck” Vogel, was killed by a hit-and -run driver last Fourth of July, testified in favor of the bill. Since Chuck’s death, the family says they have been pushing for changes to state law to add more protections to cyclists.

“Losing my father in this way was tragic, unexpected, but we are not the type of family to just sit around and feel sorry for ourselves. We want something greater to come from this. We want his legacy to be able to live on in some way,” Brian Vogel, Chuck’s son, said.

The entire Vogel family likes to cycle and has had close calls with cars in the past. Brian Vogel still rides frequently and says he constantly worries about his own safety in the wake of his father’s death.

“Something that goes through a lot of our minds when we walk out the door to go for a ride is, ‘Am I going to see my family again? Is this the day that I’m going to get hit,’” he said.

Teri Vogel considers the bill a step in the right direction, even if it wouldn’t have helped in her husband’s case.

AAA Colorado was also in support of the bill. Spokesman Skyler McKinley testified that AAA data shows that over a five-year period, cyclist fatalities have increased by 31% in the U.S. and that the organization believes the traffic offense, coupled with proper education, will help protect vulnerable road users.

However, during the House and Senate floor debates of the bill, Republican lawmakers raised concerns about the bill. Sen. Bob Gardner, R-El Paso County, said that while he agrees with the need to clarify who has the right of way, he disagrees with the penalties the bill brings.

Rep. Terri Carver, also from El Paso County, meanwhile, expressed concerns with the liability portion of the bill, which faults drivers if they are involved in a crash with a cyclist in a bike lane. She believes that type of blanket liability is too broad. She was also concerned that this bill would override all other traffic rules, including at intersections.

Despite the opposition, the bill passed both chambers. On the Senate side, Republican senators Dennis Hisey, Kevin Priol, Bob Rankin and Jack Tate joined Democrats to vote in favor of the bill.

In the House, a lone Republican representative, Rep. Colin Larson, R-Jefferson County, voted with the Democrats in favor of it.

The bill is now on the governor’s desk awaiting his signature.

A spokesperson for Governor Polis sent Denver7 a statement saying, “The Governor appreciates the work of the sponsors to make our roads safer and protect cyclists. We are currently reviewing the bill and will take action when it reaches our desk.”

The Vogel family says this bill is a start but that they are planning on continuing to push for more changes to keep vulnerable road users safe.

“If we remain hopeful and we remain involved, maybe we can prevent that next tragic accident from happening because a driver is better educated or the officers are better equipped to enforce the law,” Brian Vogel said.

The family is also keeping an eye on a distracted driving bill and one to harshen the penalties for someone convicted of careless driving resulting in serious bodily injury.

They’re hoping that by pushing for these types of changes in state law they will be able to prevent other families from going through the same type of tragedy.