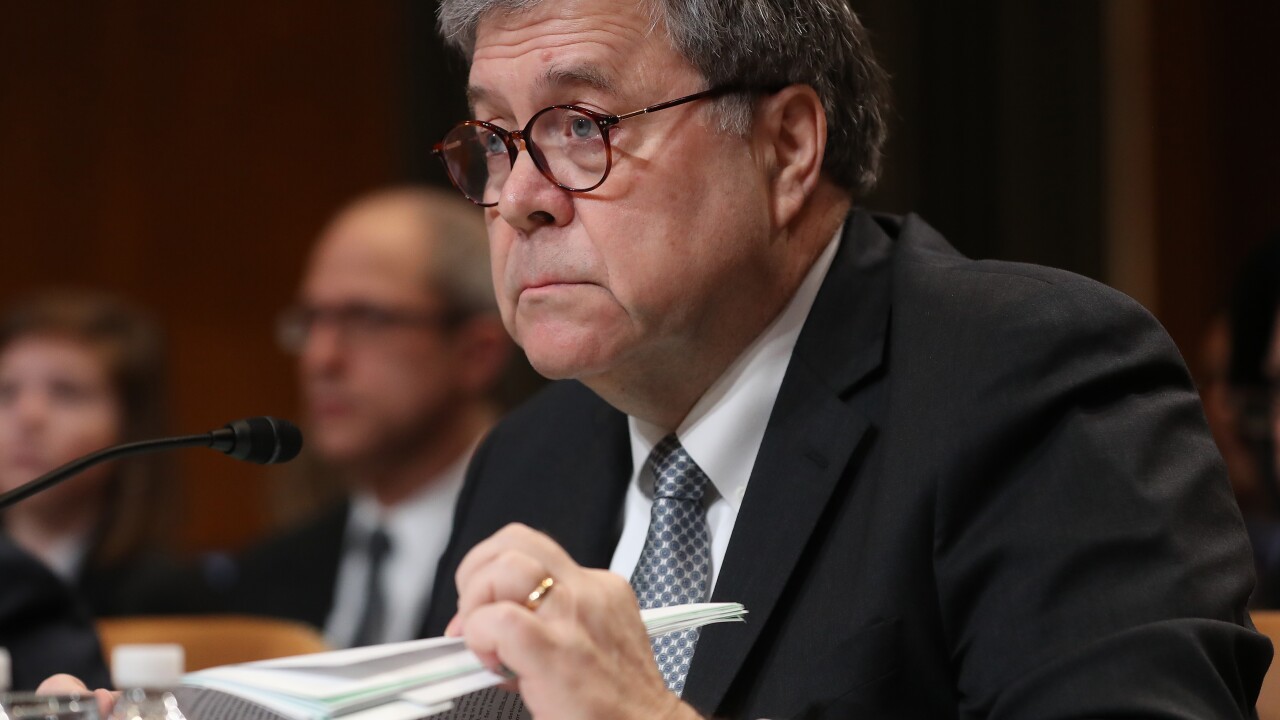 Copyright Getty Images. All Rights Reserved.
Mark Wilson/Getty Images
WASHINGTON, DC - APRIL 10: U.S. Attorney General William Barr testifies before the Senate Appropriations Committee in the Dirksen Senate Office Building on April 10, 2019 in Washington, DC. Barr is appearing before the Senate committee one day after testifying to the House where he faced many questions about the Mueller report. (Photo by Mark Wilson/Getty Images)

DENVER – U.S. Attorney General William Barr said Wednesday during a Senate Appropriations subcommittee hearing that he would prefer the U.S. take an approach to marijuana similar to the one outlined in the states’ rights marijuana bill sponsored by Colorado’s U.S. senators over the current system.

Barr’s comments came in response to questions from Sen. Lisa Murkowski, R-Alaska, who is a cosponsor of the STATES Act, which was introduced last week for a second straight year and is cosponsored by Sens. Cory Gardner and Michael Bennet, as well as Rep. Joe Neguse, D-Colo.

Murkowski asked him to share his thoughts on the measure and asked whether senators would be able to work with him on the issue of states’ rights regarding marijuana.

Barr said the current situation regarding the federal approach to states that have legalized marijuana is “intolerable” and said that the Department of Justice was circulating the STATES Act through the department for comment.

“Once we get those comments, we’ll be able to work with you on any concerns about the STATES law,” Barr told Murkowski. “But I would much rather that approach, the approach taken by the STATES Act, than where we currently are.”

He said he would still favor a rule that barred marijuana federal but said he was open to a different approach.

“Personally, I would still favor one uniform federal rule against marijuana, but if there is no sufficient consensus to obtain that, then I think the way to go is to permit a more federal approach so states can make their own decisions within the framework of federal law, so we’re not just ignoring the enforcement of federal law.”

Murkowski told Barr that there would be a group of senators willing to work with him and the Justice Department after the department’s review.

Gardner said in a statement that he met with Barr earlier this year to discuss “the disconnect between federal and state marijuana laws” since most U.S. states and several territories and tribes allow some form of marijuana.

“The bipartisan, commonsense bill ensures the federal government will respect the will of the voters – whether that is legalization or prohibition – and not interfere in any states’ legal marijuana industry,” Gardner said in a statement Wednesday. “I’m glad Attorney General Barr today reiterated his belief that the current situation is untenable and that the STATES Act is an approach he would be interested in pursuing, and I hope my colleagues will hear his loud and clear call for Congress to act.”

President Trump said last June he would “probably end up supporting” but the measure never made it to his desk for consideration.

Gardner said last week that Trump had reiterated his support for this year’s measure.

“The President has been very clear to me that he supports our legislation. He opposed the actions that were taken by the Attorney General to reverse the Cole Memorandum, and believes that we need to fix this and that is why he believes the STATES Act is the right way to do this," he said in the news conference announcing the measure.

There are several pillars to the STATES Act, which would change federal code to give more leeway to states where marijuana is legal after the Cole Memo was rescinded in January 2018 by former Attorney General Jeff Sessions.

This year’s measure would amend the Controlled Substances Act so that states and tribes complying with state or tribal law would no longer see many of the act’s provisions apply. But it would continue to prohibit the endangerment of human life while manufacturing controlled substances and bar anyone under age 18 from working in the marijuana industry.

The Government Accountability Office would be ordered to study the effects of legal marijuana on traffic safety and states’ testing standards and clarify banking and financial regulations between states where marijuana is legal and the federal financial system.

The measure has support from a host of various banking, civil rights and drug policy organizations.

The STATES Act was unveiled last Thursday, a day after the city of Denver wrote to Barr and the members of Congress from Colorado asking for clarification on how the feds plan to interact with states and territories where marijuana is legal. At least two Denver residents were denied naturalization because of their work in Colorado’s marijuana industry.