Columbus statue's base was torn down, plaque removed to be stored away 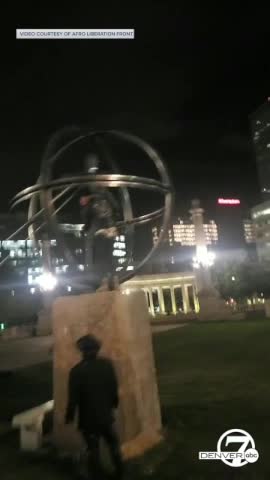 Another statue has been torn down in downtown Denver, this one with ties to Christopher Columbus. 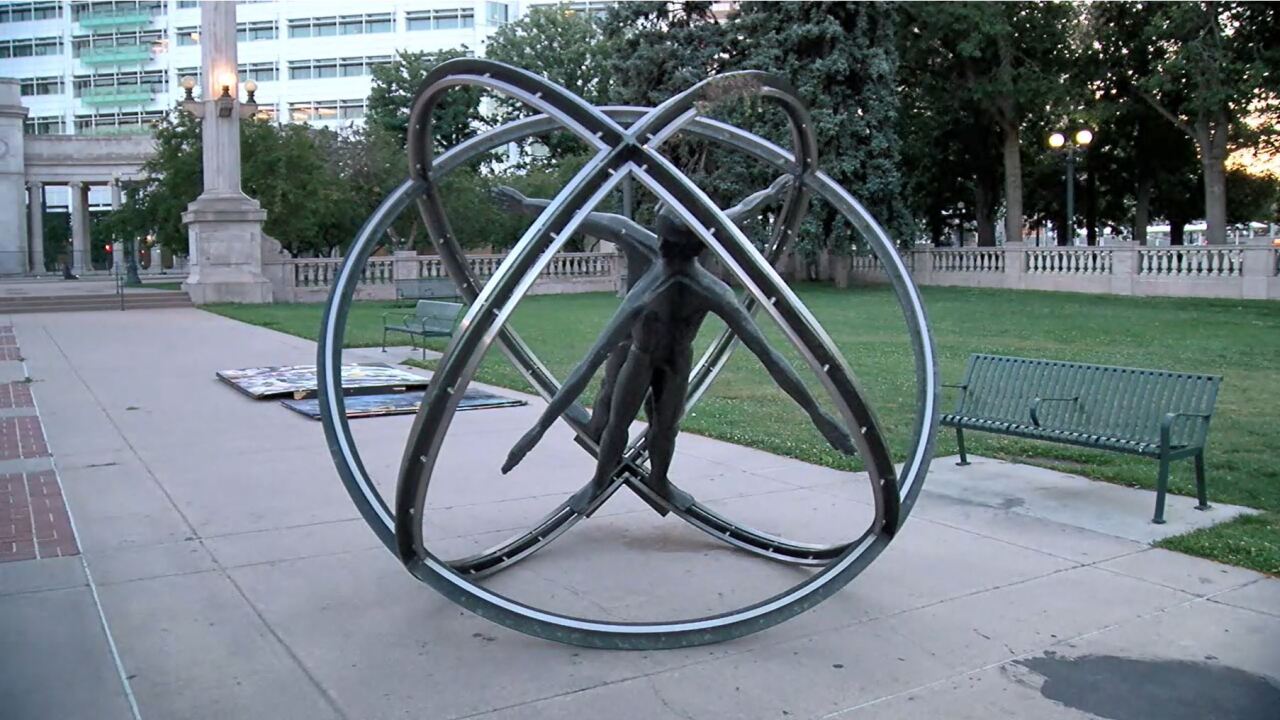 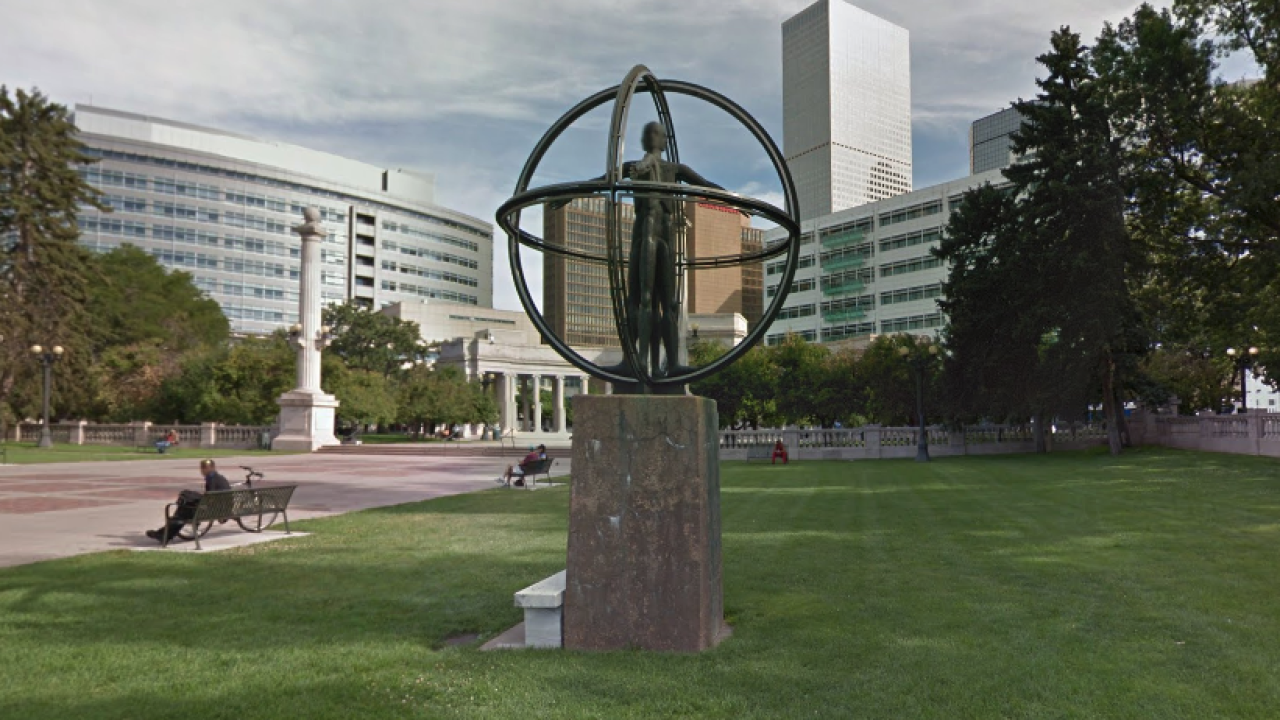 DENVER — Another statue has been torn down in downtown Denver, this one with ties to Christopher Columbus and at Civic Center Park, and the city has already removed a nearby statue of Kit Carson that officials believed would have been torn down as well.

According to History Colorado, the 15-foot bronze sculpture was designed by Denver sculptor William F. Joseph. It has four faces, arms and legs pointing in four directions and encircled in rings, symbolizing the globe. It's titled "In Honor of Christopher Columbus." Colorado was the first state that historically honored Columbus Day as a holiday, but in March 2020, Gov. Jared Polis signed a bill abolishing Columbus Day in the state and replacing it with Cabrini Day in October.

The statue has a plaque on its base honoring Columbus. In 1992, the American Indian Movement called for the removal of the plaque, but it still remains.

Doug Schepman with the Denver Police Department said the department is investigating the vandalism, which occurred around 11:15 p.m. Thursday. The department had been monitoring demonstrators when they saw the vandalism happen live via a HALO camera, he said. Officers responded as the crowd began dispersing.

"A report was taken and officers did obtain information for investigative follow-up," Schepman said. "Moving forward, DPD will continue monitoring demonstrations and is working with other city agencies to identify other sites/statues that could potentially be targeted. Extra patrols will be conducted at those locations as staffing and call loads allow."

The above video was submitted to Denver7 by a group called the Afro Liberation Front. The group had not claimed responsibility as of 6:40 a.m.

READ MORE: As Colorado grapples with its checkered history, should statues be removed?

The statue was found on its side on the sidewalk Friday morning.

The statue has gained more attention recently as discussions mount across the country of the importance of publicly displaying statues that represent a dark history. On June 20, Denver Public School Board Director Tay Anderson called for the removal of the Columbus statue. Councilman Chris Hinds said during a recent conversation with the sculptor's family, he learned the statue itself does not depict Columbus.

“I’m learning that the biggest issue was actually with the plaque, not with the statue itself,” he told Denver7 previously. “I think it’s time to remove the plaque and I think it’s also time for us to consider what might go in its place.”

The plaque, in part, reads, "His four voyages brought Europe and the Americas together, forever changing history. A new nation was to rise. A new Democracy was born."

Around 10:45 a.m., city crews began removing the base of the statue, including the plaque. The plaque fell off the base as crews used a jackhammer around it. It will be stored.

Scott Gilmore, deputy executive director of the Denver Department of Parks and Recreation, said people likely believed the statue was of Columbus, though it's not. It's based on "Vitruvian Man" by Leonardo da Vinci, he said.

Had the statue been of Columbus, city leaders would have wanted it removed immediately, he said.

Shortly before 8 a.m., Valerie Wolf Necklace, a member of the Lakota people, came to the statue and said she wanted to pray at it. She told Denver7 she wants the statue restored, but the plaque removed.

"I think it’s totally uncalled for what happened — it’s not in my culture to destroy things that belong to other people," she said.

Indigenous woman says she wanted to pray at this statue that was toppled overnight. She wants the statue restored but the plaque honoring Christopher Columbus removed. @DenverChannel pic.twitter.com/RRcI4SToYJ

She said there is a better way of doing things than going to this extreme.

"We don’t hurt each other, we don’t hurt or destroy other people's property," she said. "As indigenous native people, we honor everything and everybody."

Tessa McLean of the Ojibwe Nation, with the American Indian Movement of Colorado (AIMC), also visited the torn-down statue.

"The AIMC did not have anything to do with the removal of this statue, but we have been advocating for many years — for 30 40 years — to remove the plaque on the statue," she said. "We don’t believe it’s appropriate to celebrate Columbus and the genocide that he represents against native peoples."

She said she, and many others, is tired of walking by statues every day that symbolize genocide.

"It’s time," she said. "People are able to mobilize and we’re able to say, 'I'm frustrated and the world can see that," McLean said.

A letter addressed to Denver Mayor Michael Hancock and Denver City Council from AIMC dated June 24 called for the removal of the plaque, as well as the Pioneer Fountain monument and fountain on the corner of W. Colfax Avenue and Broadway. The letter insisted both pieces be removed by July 8.

"There can be no question that both monuments reflect racist and destructive messages to indigenous peoples and do not serve any redeeming social value," the letter reads. "Failure of the City to remove these statues will be considered another in a continuing line of attacks and insults against Native people."

The "In Honor of Christopher Columbus" statue was toppled roughly 24 hours after a Civil War statue was torn down in front of the Colorado State Capitol.

Police said they believe four suspects were involved in toppling the Civil War statue around 1:30 a.m. on Thursday. The statue was removed later that morning, as were nearby cannons that were also part of the memorial.

No arrests have been made, or citations given out, in either case as of noon Friday. Anybody with information on the incident is encouraged to call Metro Denver Crime Stoppers at 720-913-7867 to submit an anonymous tip.

Later Friday, city crews were seen bringing down a statue of Kit Carson at Broadway and Colfax, presumably to prevent protesters from taking down the statue in a more destructive manner.

And there it goes. Kit Carson statue removed from fountain at Broadway and Colfax in Denver. pic.twitter.com/Pj8Tq7sO4u

Carson, a famed frontiersman and trapper in the 1800s, was also known as a fighter of Native Americans while in the U.S. military. Kit Carson County in eastern Colorado and Kit Carson Peak in southern Colorado are named after him.