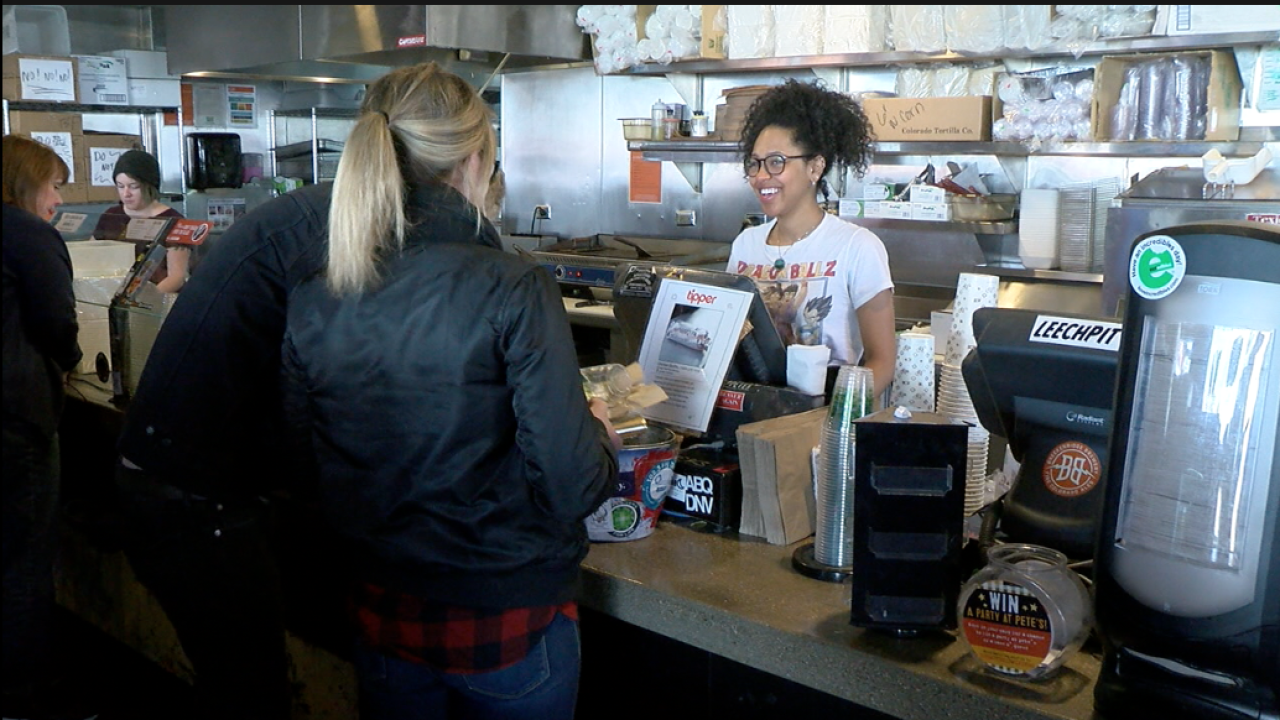 DENVER -- A Denver-based business has earned the attention of Mayor Michael Hancock for how much it's paying its employees.

During a news conference Thursday, the mayor gave a shout out to Illegal Pete’s restaurant for boosting the base pay of all employees without being prompted to do so by the government.

“Proud employers like Amazon and our very own Illegal Pete’s restaurant chain have already moved in this direction,” Mayor Hancock said. “I want to thank those employers because they didn’t have to be forced, they did it because they care about their employees and they recognize the economic environment in which we’re living.”

Mayor Hancock is trying to move Denver in the same direction, proposing to boost the minimum wage for city employees to $15 an hour.

For Illegal Pete’s, the move took about three years to implement. Erin Barnes, the communications specialist for the restaurant, says base pay for employees was $9 in 2015 but then gradually went up to $15, not including tips. The most recent raise happened in January.

“He didn’t want to talk about it too much in the beginning because he wanted to see how it went ,” Barnes said.

However, the restaurant says the move is actually saving them money in the long run with employee retention.

“It takes a lot of money to train somebody and to find great employees especially in the restaurant industry,” Barnes said.

Restaurants are also competing with a booming cannabis industry in Colorado, which is hiring employees by the thousands. By offering more money, Barnes said Illegal Pete’s has been able to not just find new employees but also keep them around for years.

“I feel our business just keeps getting better because people like to see a boss that treats their employees well,” she said.

Employees also tell Denver7 they’re living more comfortably thanks to the pay raises. Bartender Emily Sanderson used to work for Uber to help make ends meet but says she doesn’t have to do that anymore.

“I’m a single mom and now that we have this wage increase, I’m going back to school to get my MBA in marketing, so it’s huge for me. I’m able to work a little bit less and still maintain everything,” Sanderson said.

She’s also able to get more sleep; Sanderson says between working two jobs and taking care of her son, she was only getting between four and five hours of sleep before. Now, she has more time to spend with her son and to focus on her studies.

“I’m able to live well and live easily, there’s no more stress at all, so it’s definitely a complete and total change of mentality for me personally,” Sanderson said.

Other employees are also seeing the benefits of the additional income. One employee was able to move into an apartment of her own for the first time. Another worker is looking into buying a house with her husband. A third worker is having a baby soon so the added income could mean more flexibility for his family.

“We barely have any turnover at our company. We just grow at our company which is amazing; you don’t really see that in restaurants especially, but it’s different here,” Sanderson said.

A base pay of $15 an hour might not be feasible for every business, particularly those ones outside of Denver.

Economist Chris Stiffler from the Colorado Fiscal Institute says it all depends on the cost of living in various communities.

“The cost of living here in Denver is a lot higher than the eastern plains of Colorado,” Stiffler said.

Stiffler believes $15 an hour is not enough for a person to live comfortably in Denver, citing the self-sufficiency standards which are closer to $53,000 a year.

But in smaller communities, even paying employees $15 per hour might be too much for businesses.

“I think the problem is the cost of living in Denver is so different than the eastern plains or San Luis Valley or the western slope area, that if you go to $15 an hour on a statewide level, it’s going to crush really small restaurants in Logan County, for instance,” he said.

Barnes says she knows it’s not possible for some restaurants to pay their workers more, but for those who can afford to, Illegal Pete’s might serve as an example for how to make it happen.

“I don’t think that Pete wants to say to all small business owners that you need to do this, he’s not trying to be heavy-handed about it, he’s just trying to be more of a loose inspiration in that we should think about how we can help, think about how we can raise employee wages,” Barnes said. “He also wants to challenge business owners who are already successful to maybe do the same thing.”

More than anything, Barnes says, the restaurant proves that raising the base pay for employees is possible for businesses that are determined to do so.