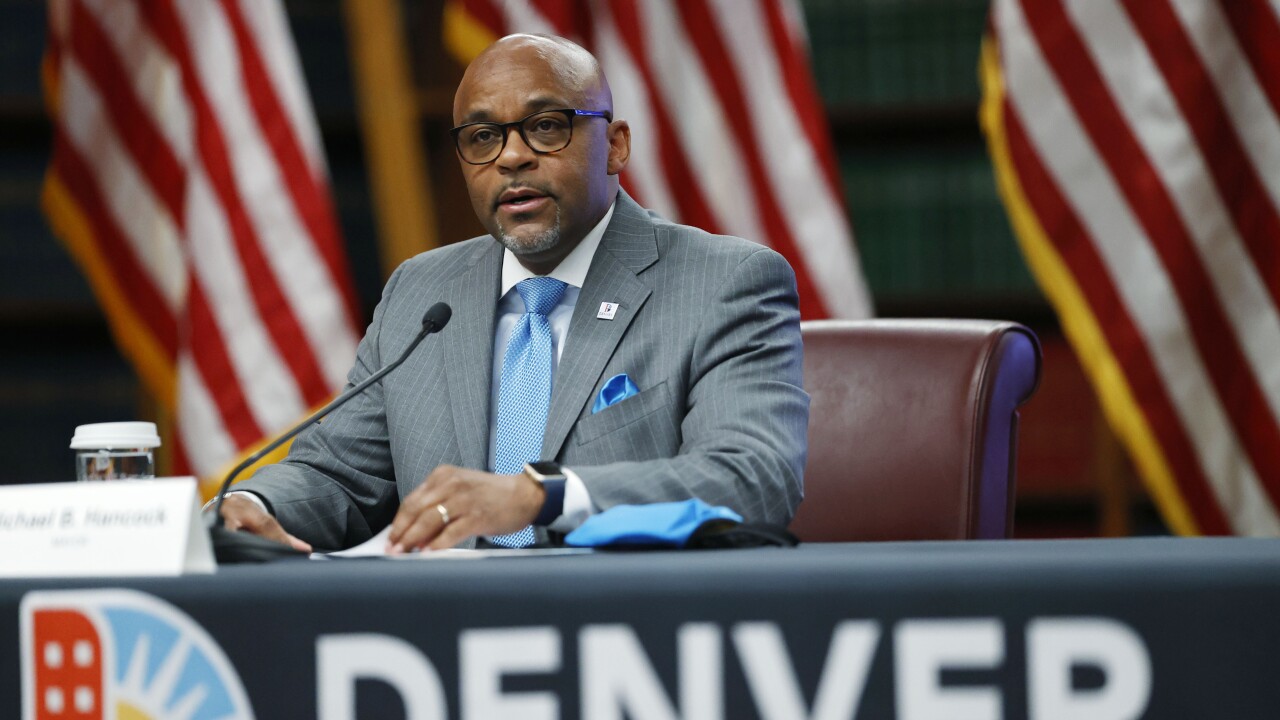 (Copyright 2020 The Associated Press. All rights reserved. This material may not be published, broadcast, rewritten or redistributed.)
David Zalubowski/AP
Denver Mayor Michael Hancock makes a point during a news conference to explain the city's plan to allow businesses to reopen as the city's stay-at-home order to stem the rise of the new coronavirus expires later this week on Tuesday, May 5, 2020, in Denver. (AP Photo/David Zalubowski)

"We don't find them humane or safe," Hancock said of some of the camps. "We have a balancing act we have to achieve here. We have to not only protect those who are in the encampments. We have to protect and keep safe the general public ... we are not going to compromise on that."

The sweep of a homeless encampment in Lincoln Park on Wednesday resulted in a clash between protesters and police. Officers were trying to move the protesters away from a gate near the camp, to make room for employees to clean the area. As police began to push away the crowd, Tay Anderson — the Denver Public Schools board member, who was among the protesters — fell to the ground, injuring his head.

Anderson in a news conference Wednesday called the city's camp sweep Wednesday "disgusting," and alleged that city employees only gave those in the camp a 10-minute warning before forcing them to leave.

But Hancock defended the city's decision to sweep the camp on short notice, citing a rise in COVID-19 cases; other outbreaks such as hepatitis; needles on the ground; and a triple shooting near Civic Center Park earlier this week.

Hancock declined to give information about the city's strategy on sweeping a large encampment near Morey Middle School, saying there are people who want to put city employees and police officers "in danger by tipping off folks who want to come in and escalate the situation."

Hancock said a city councilmember "is texting and sending out information, trying to get people to show up and protest," but he did not name the councilmember.

"I'm not going to mince words," Hancock said. "It's not OK and it's putting everyone at risk."

Later Friday, Councilmember Candi CdeBaca, who had tweeted about the possibility of a sweep earlier this week, called Hancock's comments "beneath the dignity of his office" and said she would "encourage him to focus on the real public health risk which is his failed housing policies that have placed vulnerable populations at increased danger of COVID-19 infection ... every time he moves encampments without a plan for housing."

Hancock and city housing director Britta Fisher said the city wants those who are experiencing homelessness to take advantage of city shelters, where about 550 beds are available on a daily basis.

Fisher and Hancock said the spread of COVID-19 has been minimal in the shelters and said, overall, that the shelters are safer than living on the streets.

Earlier this summer, Hancock announced his support of temporary sanctioned campsites in the city in response to the COVID-19 crisis, though it's still unclear where those campsites will be located.