CSP says sweep is to address health concerns in park 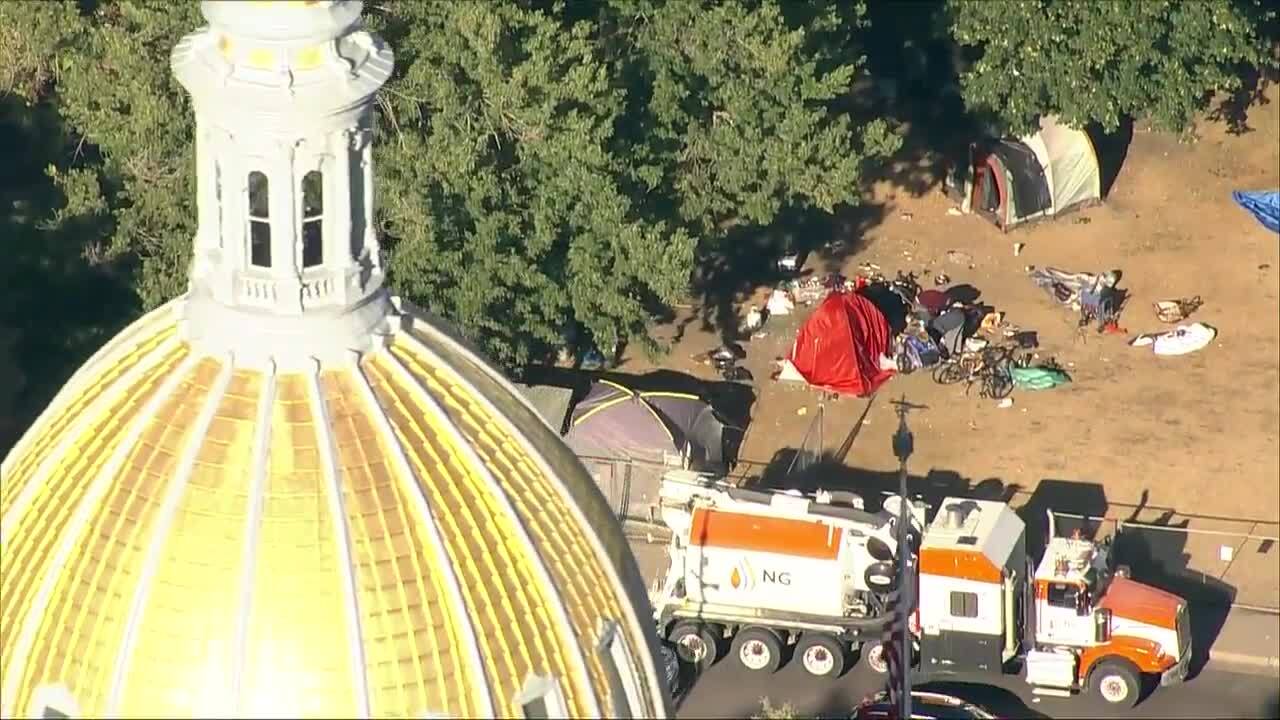 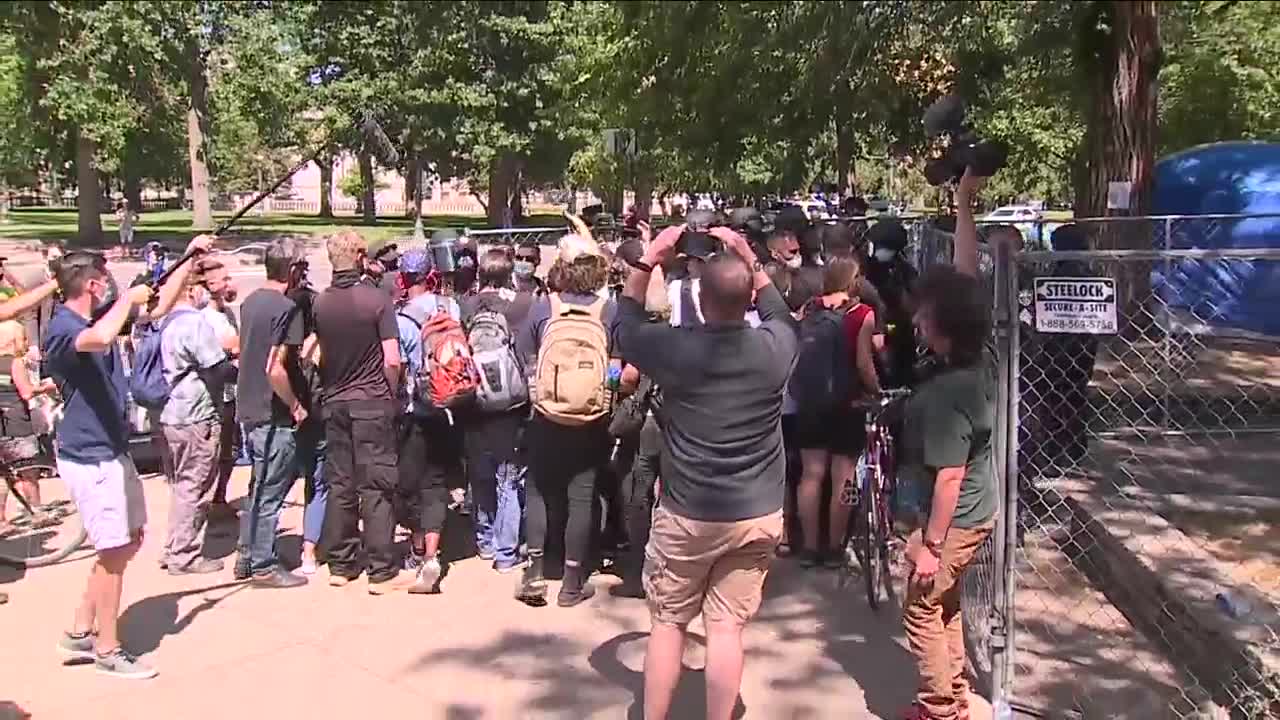 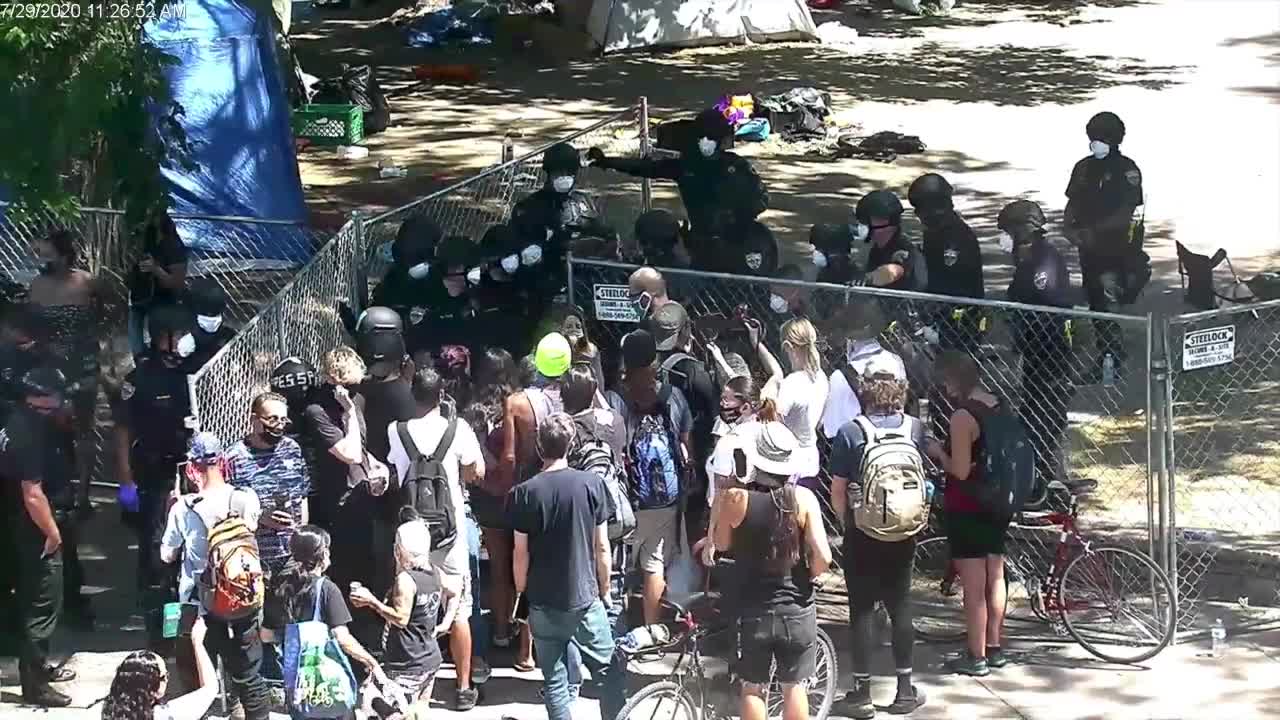 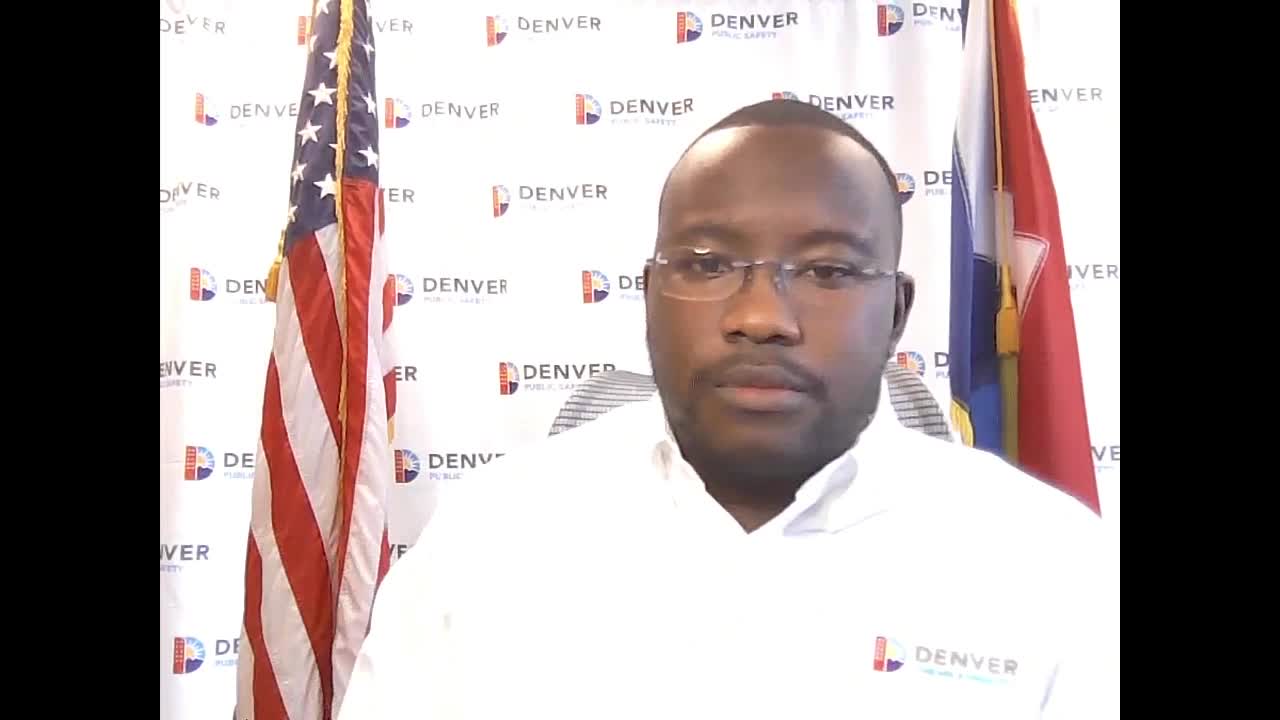 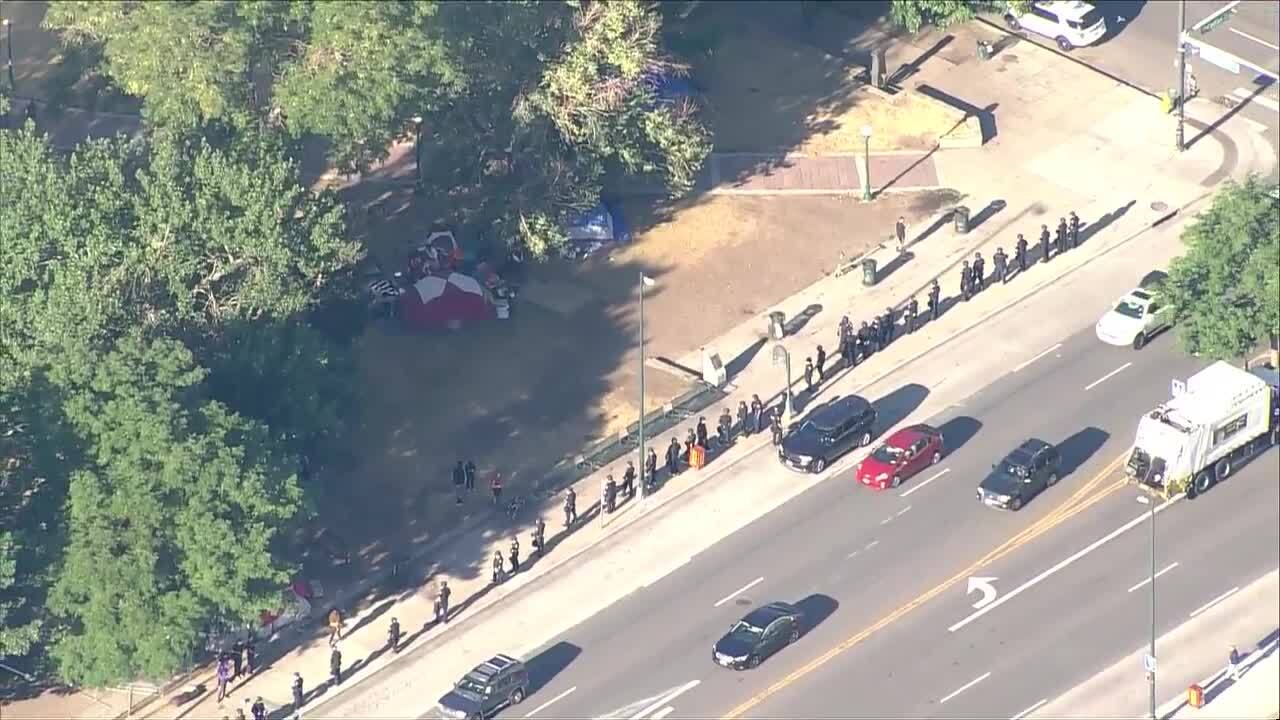 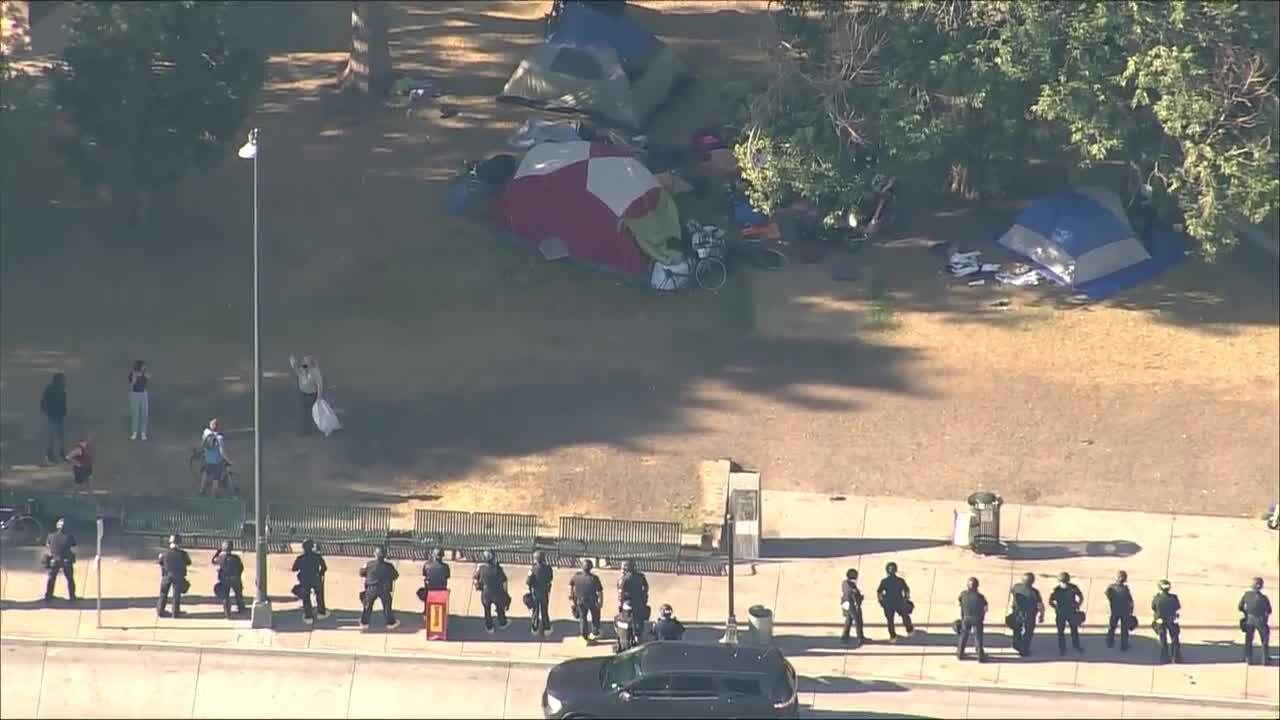 DENVER — The sweep of a homeless camp in Veteran's Park, just west of the Colorado State Capitol, resulted in a clash between protesters and authorities Wednesday.

Tay Anderson, a Denver Public Schools board member, suffered an apparent head injury during the incident as Denver police and Colorado State Patrol troopers tried to move protesters away from a gate to close off the park.

Anderson, who was among the protest crowd, fell to the ground and could be seen holding his head. Anderson later tweeted a picture of himself that appeared to be taken from a hospital, saying, "My body hurts all over."

⁦@TayAndersonCO⁩ falls to the ground after ⁦@DenverPolice⁩ officers push people back in order to close gate to homeless camp at Civic Center Park. (UNEDITED VIDEO). Tay was taken away in a car with an ice pack on his head. pic.twitter.com/gihDrjtOFH

Anderson spoke about the incident during a 6 p.m. news conference Wednesday, to give his account of what happened earlier in the day. You can watch the news conference in full below.

Full news conference: Tay Anderson responds to police actions during the sweep of a homeless encampment near the Colorado State Capitol

Murphy Robinson, Denver's Director of Public Safety, said in a news conference Wednesday afternoon that officers had given the protesters a lawful order to move from the area, so employees could continue cleaning the homeless camp area.

Robinson said "advocates and agitators" got involved and were blocking the gate that city employees were trying to gain access to.

"This was a clear interruption to the efforts our departments were trying to do," Robinson said.

Robinson acknowledged that Anderson fell during the incident but said it was unclear whether he was pushed by an officer. The city is investigating the incident, Robinson said.

"I'm sorry this happened to you," Robinson said to Anderson, but Robinson said it was important for the protesters to follow orders from police.

After Robinson's news conference, the city of released footage from its Halo camera system showing the confrontation. Watch the video in the player below:

with protesters at Lincoln Park during a homeless camp sweep.

Earlier Wednesday, officials announced they would be conducting a "slow sweep" of the homeless encampment out of concerns for public health.

"They are unsafe," Robinson said. "They are unhealthy. And we have to do something different."

Robinson said the city had seen an uptick in COVID-19 cases among people living at the camp. The city also plans to disperse the homeless camp near Morey Middle School, Robinson said.

"We have to do better in working together to make sure all the people in our city have the services and have the opportunities to succeed," Robinson said. "Living outdoors is not the answer. Living outdoors is not something that we want for our residents, for our neighbors, our fellow citizens. And so I encourage those people who are experiencing homelessness to utilize the services that we have."

“We’ve been notifying persons that are in the park that we are asking them to voluntarily move and relocate (and) trying to provide them resources,” White said.

He said authorities are using a “slow, methodical approach” so the homeless individuals can gather their belongings. Drivers should expect to see activity in the area for several hours.

“We’re not trying to force them out quickly,” White said.

He said the city is offering bussing out to the Denver Coliseum, where various service providers are ready to help the homeless individuals, and to other areas in Denver that allow camping.

White said the sweep was spurred by ongoing health issues at the park. Clearing the area will allow crews to clean it up, he said.

“Before, we’ve had issues with the rats being out here,” he said. “We’ve had health concerns. Obviously with the coronavirus, it’s a little different. We want to be cautious as to where we’re spreading this. If we do have people showing symptoms or anything, that’s something we’re concerned with. Maybe there’s some drug use there, so (cleaning up) some of that stuff. We just want to be able to clean it up so people can still come through and enjoy it (the park) safely.”

Mia Montoya, a homeless woman camping in the park, said she doesn't know where she will go.

In a statement, Ann Cecchine-Williams with the DDPHE said the current state of the park presents a significant public and environmental health risk. She said it is DDPHE's responsibility to address these issues.

"At the same time, we have an obligation to understand the needs of those living in the park, including barriers preventing them from accepting services and shelter, and extend to them supportive options and resources," she said.

Since last week, Denver Park rangers and outreach teams have worked in the park to let the homeless individuals know there would be a temporary closure beginning Wednesday. They offered connections to services, shelters and transportation.

"Under the circumstances, DDPHE determined that advanced posting of the order would not be appropriate because of concerns around the recent escalating violence in encampments," she said.

White said because there is damage to the park, it will likely take "some time" before it’s reopened. A fence will be installed around the exterior of the park so crews can work safely.