The Colorado Soccer Association, Gov. Polis and Mayor Hancock on Thursday unveiled a plan to try and make Denver one of the host cities for the 2026 FIFA Men’s World Cup. 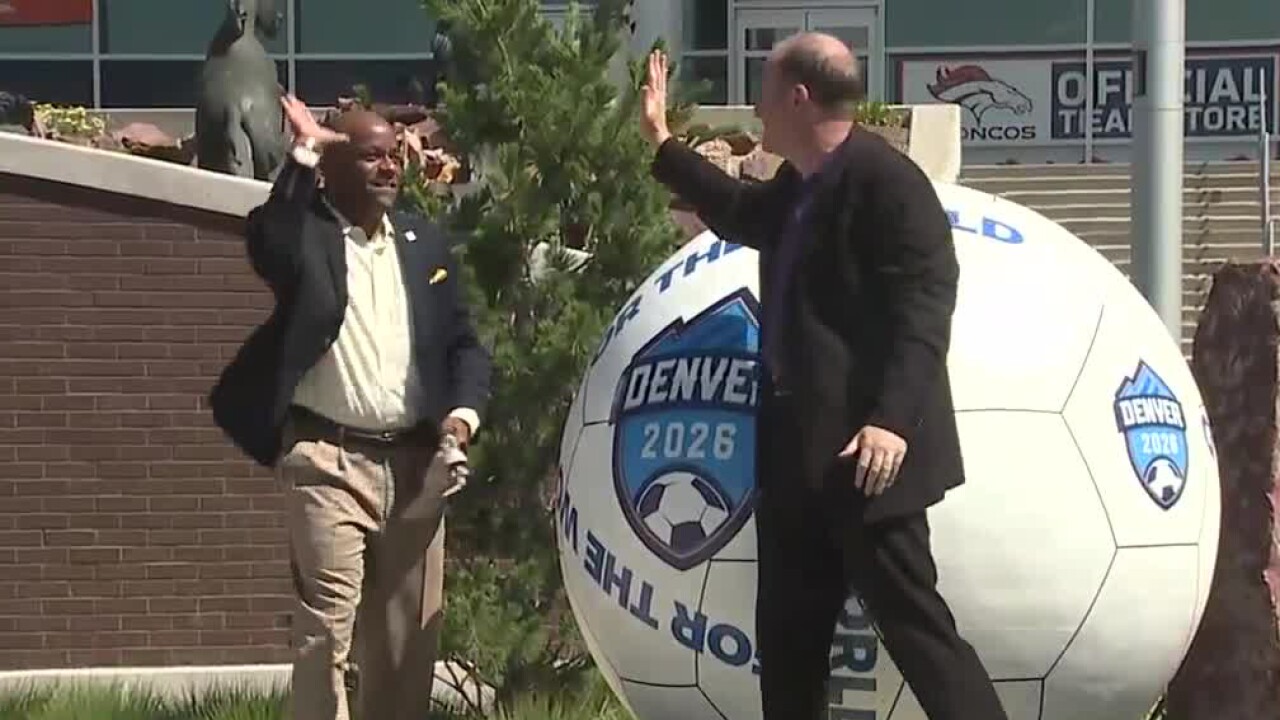 DENVER — Denver is ready to host the 2026 FIFA World Cup — that was the strong message coming from Denver officials and soccer leaders Thursday morning outside Broncos Stadium at Mile High.

FIFA has awarded the 2026 World Cup to a joint North American bid, which includes the United States, Canada and Mexico. Three Canadian cities, three Mexican cities and 10 American cities will ultimately host the games. As of Thursday, 17 cities — including Denver — in the United States were vying for the 10 openings.

The Mile High City wouldn’t be the only place to benefit from the games being held within city limits, said Nate Shotts, the CEO of Colorado Soccer Association.

“Our surrounding neighbors — Utah, New Mexico, Nebraska, Wyoming and many others — are equally supportive of us hosting the FIFA World Cup games,” he said.

Gov. Jared Polis, who had announced an invitation for the USWNT champions to visit the Colorado State Capitol earlier that day, said the economic analysis of the World Cup is significant.

The Denver metro area would see more than $300 million in new economic activity from hosting the World Cup, which would support 2,500 jobs and generate $90 million in earnings, he said.

“The impact of the FIFA World Cup on future generations of soccer players cannot be overstated,” he said. “Millions of young kids recently spent the last few weeks watching the women’s World Cup and dreaming that they too, one day, could stand up there on that world stage.”

“Ultimately, Colorado shows up again and again for soccer," he said. "We at the Colorado Rapids are incredibly proud to be a part of this great soccer community in Denver and in Colorado. We are fully supportive of this bid to bring the FIFA World Cup to Denver in 2026.”

Bob Contiguglia, who is on the bid committee chair and is a former president of U.S. Soccer, said soccer is “without question” the most popular sport in the world. On any given day worldwide, more than 265 million people will actively participate in soccer through organized leagues and clubs, he said.

The number of fans is even greater. Every four years, more than 3.5 billion people watch the World Cup — almost half of the world’s population, he said.

He said the games would prove an “incredible opportunity” to showcase Denver and Colorado to the rest of the world.

“I believe we are ready to host the world,” he said.

At the conclusion of the press conference, Hancock and Polis unveiled a new statue — a giant soccer ball with the proposed Denver FIFA logo — outside Mile High.