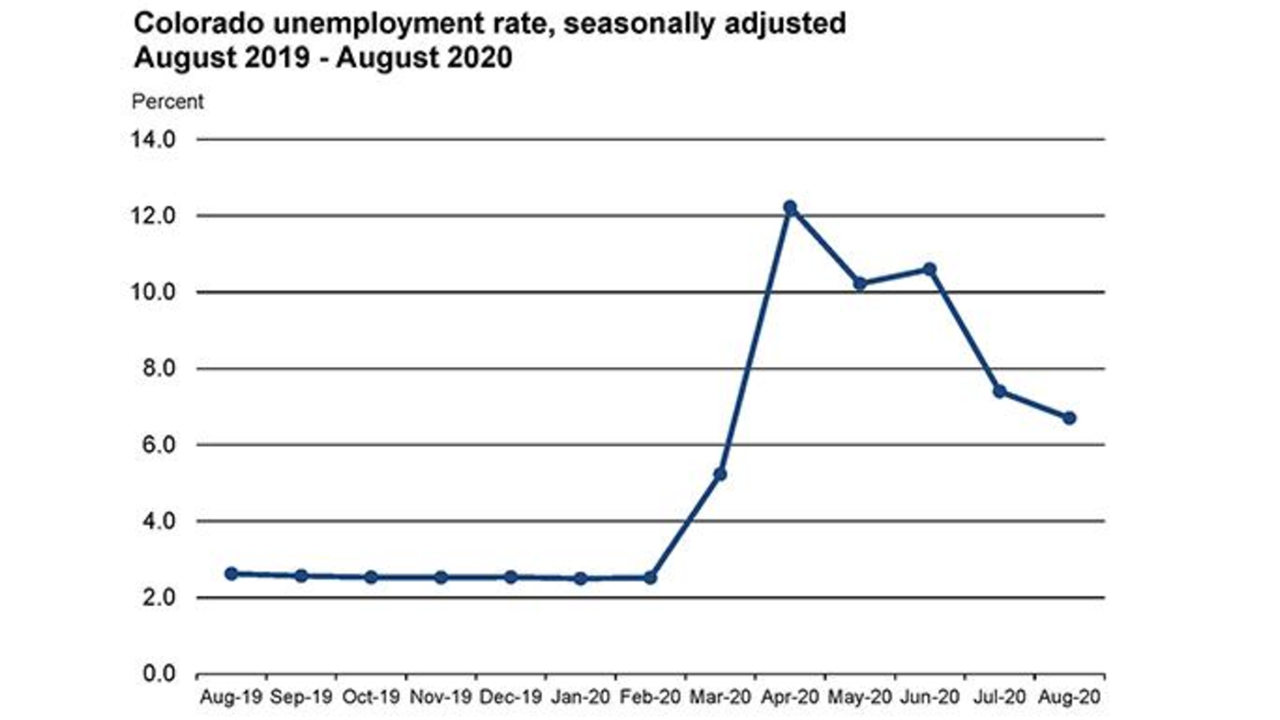 Copyright 2020 Scripps Media, Inc. All rights reserved. This material may not be published, broadcast, rewritten, or redistributed.
Colorado Department of Labor and Employment
Colorado employers added 36,900 nonfarm payroll jobs in August, which dropped the state’s seasonally-adjusted unemployment rate to 6.7% last month – down from 7.4% in July, Colorado Department of Labor and Employment officials said Friday.

After the added jobs last month, Colorado has gained back 178,500 of the 342,300 payroll jobs lost in March and April – about 52% of the jobs lost in that time frame and the 24th fastest rate of recovery among U.S. states during that period, said CDLE senior economist Ryan Gedney.

Comparatively, the U.S. has added back about 48% of jobs lost during that same timeframe.

Another 26,000 Coloradans became employed in August, meaning about 62.2% of Coloradans aged 16 and up are employed – up from 58.3% in April but below the pre-pandemic level in February of 67.7%, when unemployment in Colorado was at an all-time low.

There were solid gains in private industry sectors that have struggled during the pandemic. Leisure and hospitality, which includes restaurants, bars and hotels, gained around 10,000 jobs last month. Education and health services gained 7,100 jobs, and trade, transportation and utilities gained roughly 6,100 jobs and there were no significant losses month-over-month in most industries, the CDLE said.

Government jobs increased by 10,400 last month, with some of those jobs attribute to a surge in U.S. Census temporary workers. Gedney said that about 50% of Coloradans who are unemployed remain on temporary unemployment, compared to 30% permanently unemployed from their previous job – which was mostly unchanged from July.

And the share of workers currently working part time but who want full-time jobs jumped to 8% in August – about 240,000 workers, Gedney said. He said a possible explanation for that resurgence – the figure is the same as it was in May – could be a reduction in people’s hours tied to the start of the school year and child care needs, as anyone working less than 35 hours a week is considered part-time by CDLE standards.