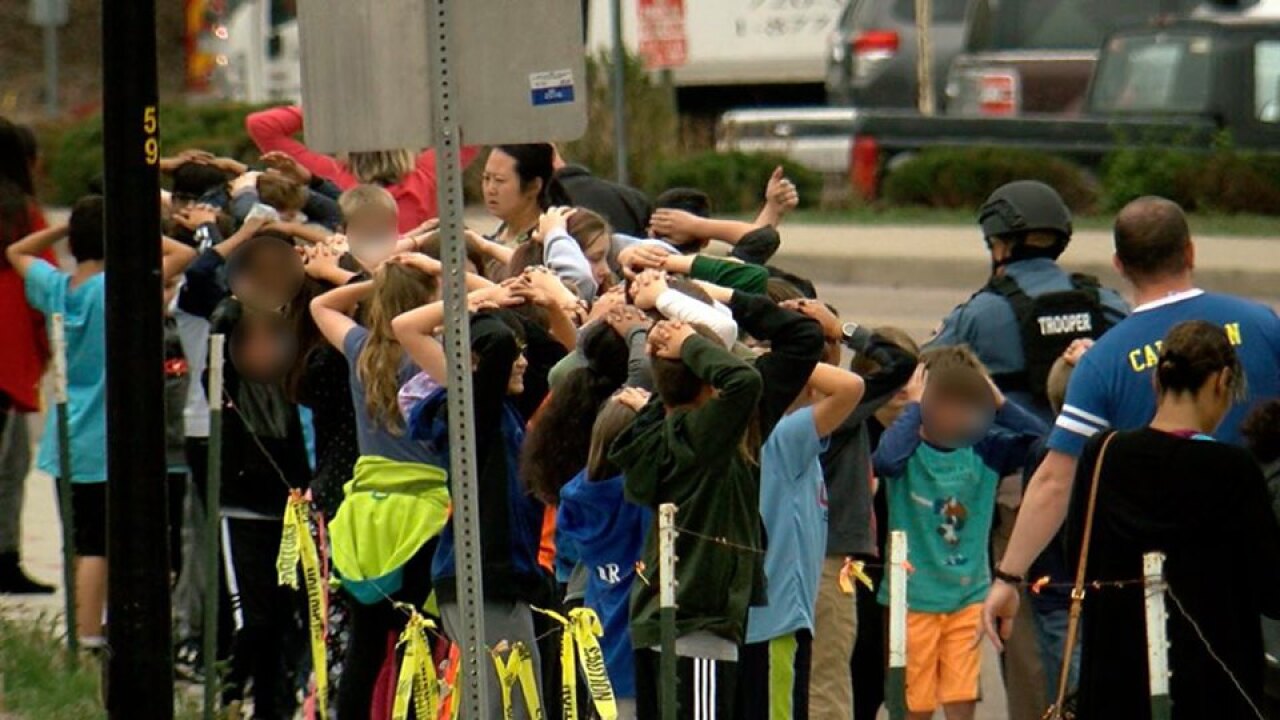 Students are evacuated from STEM School Highlands Ranch after a shooting there Tuesday afternoon. 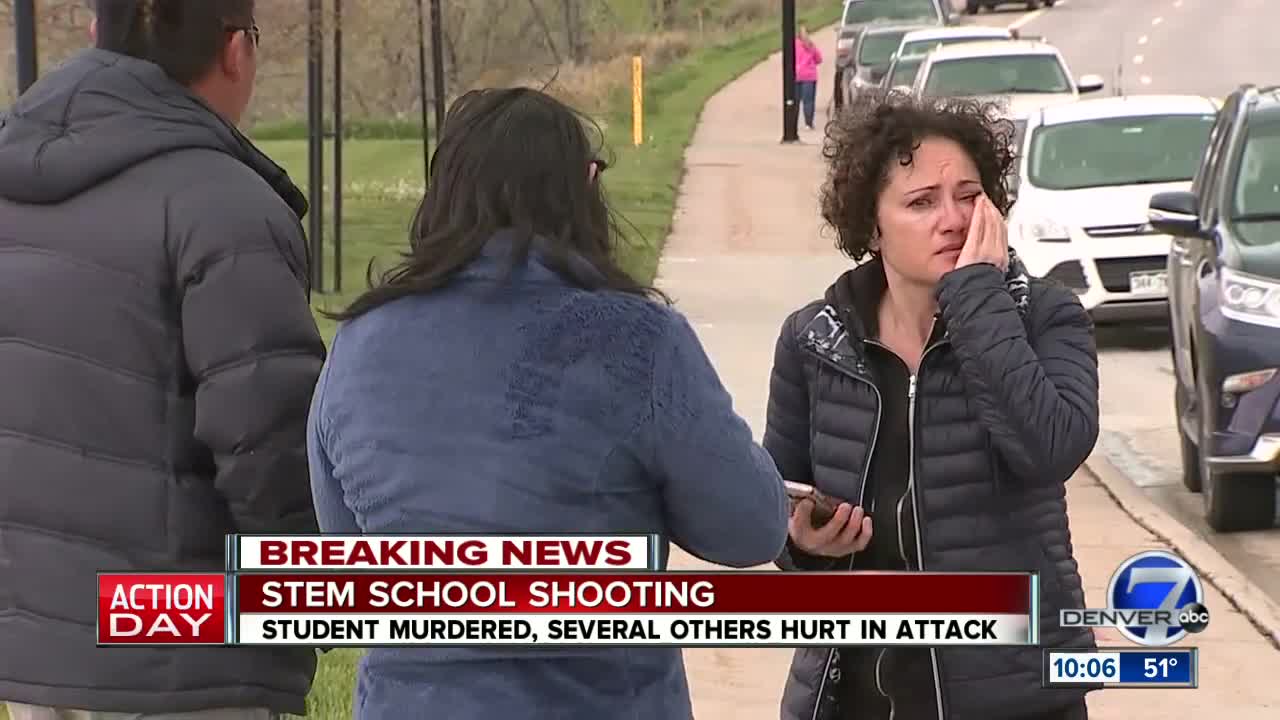 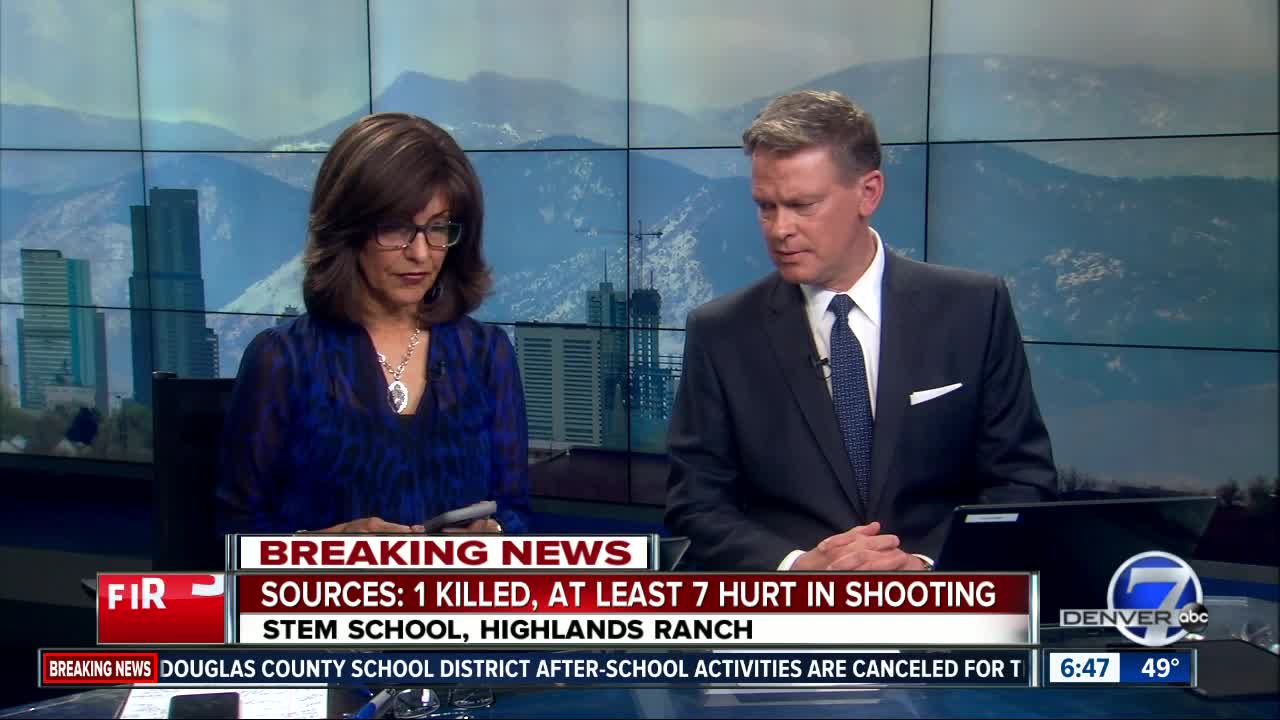 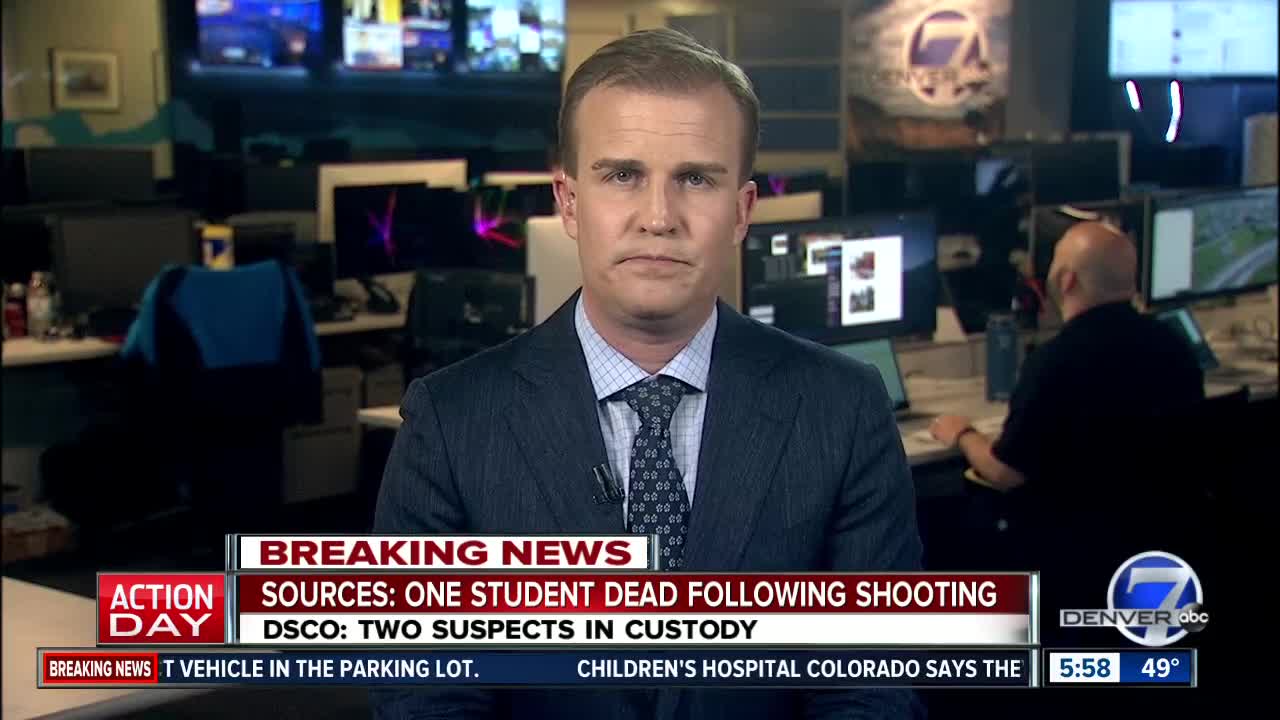 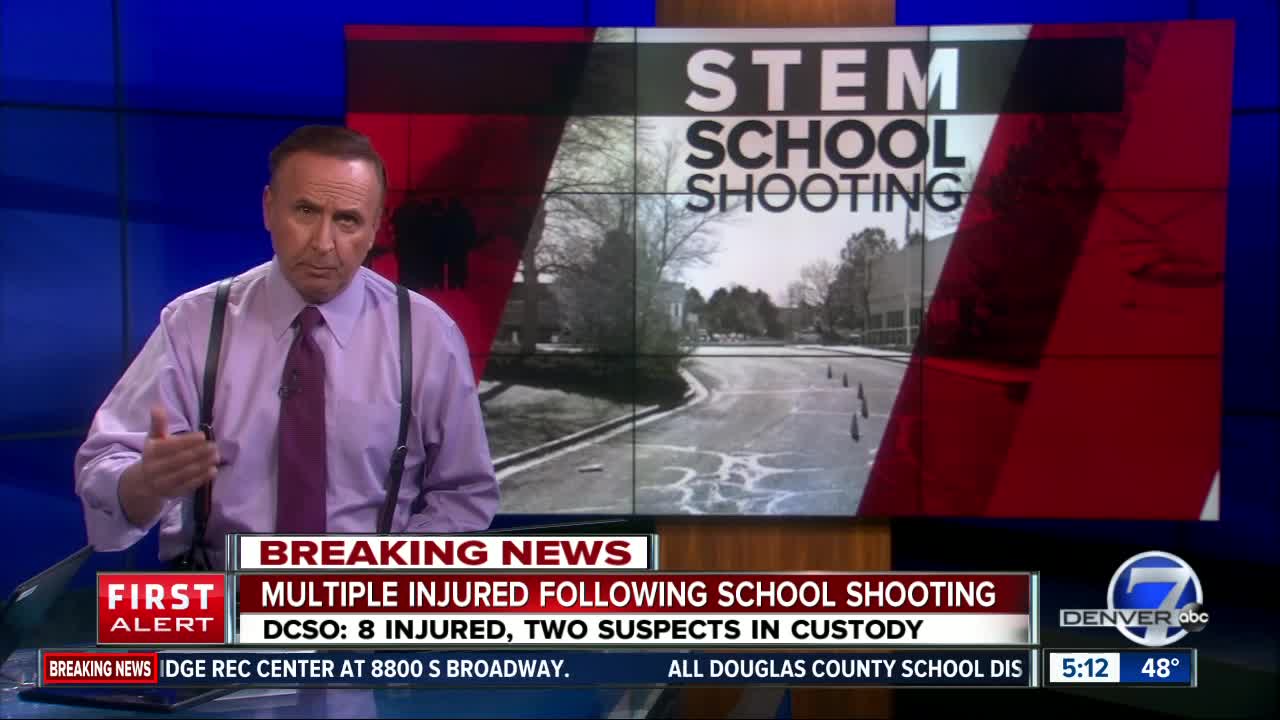 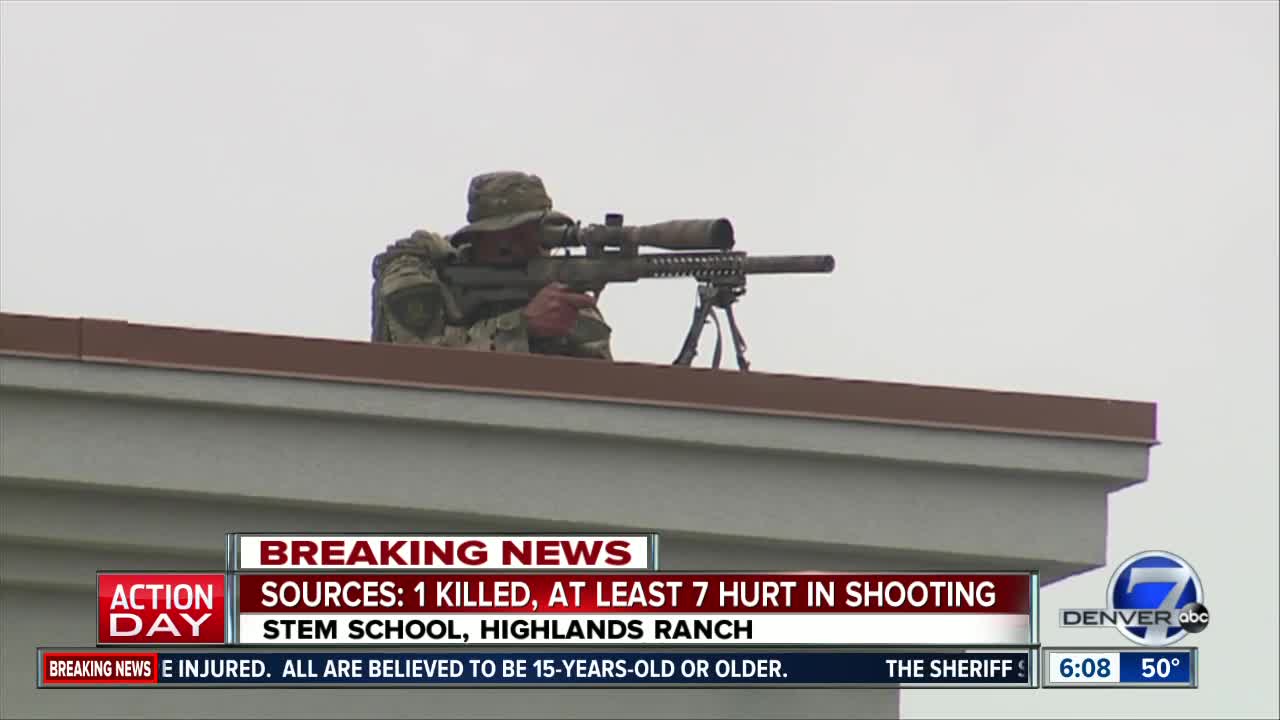 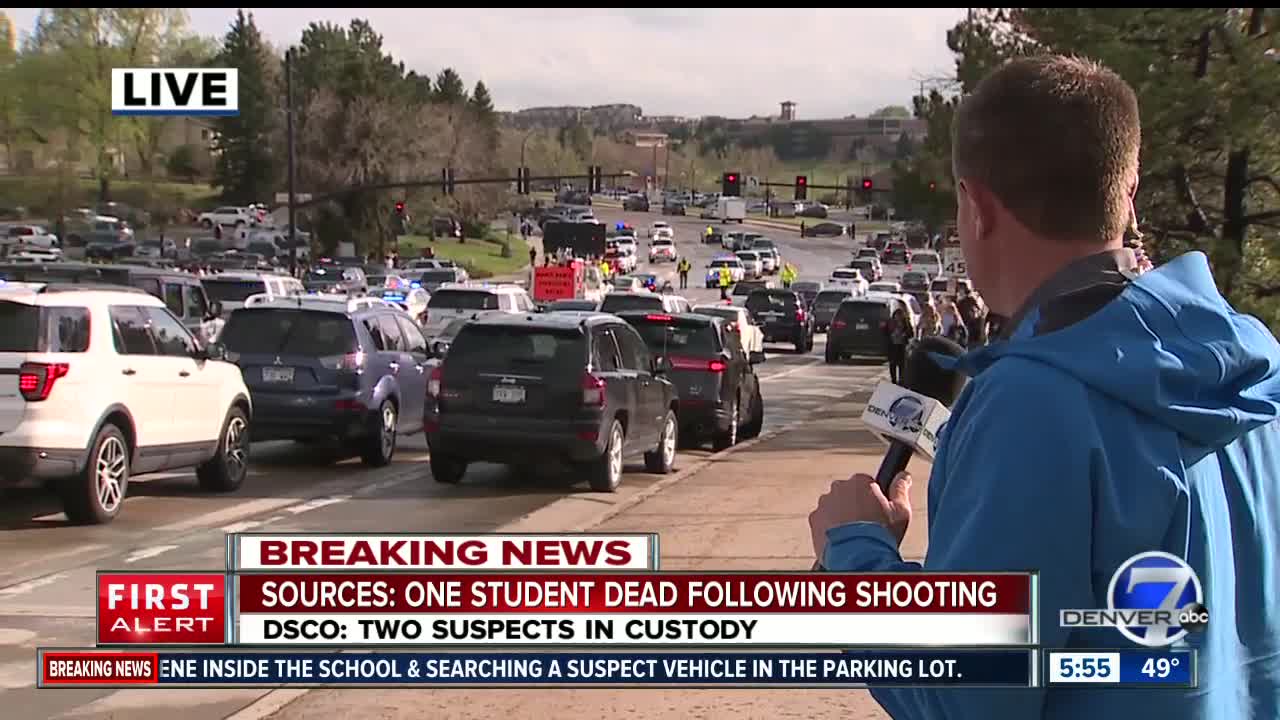 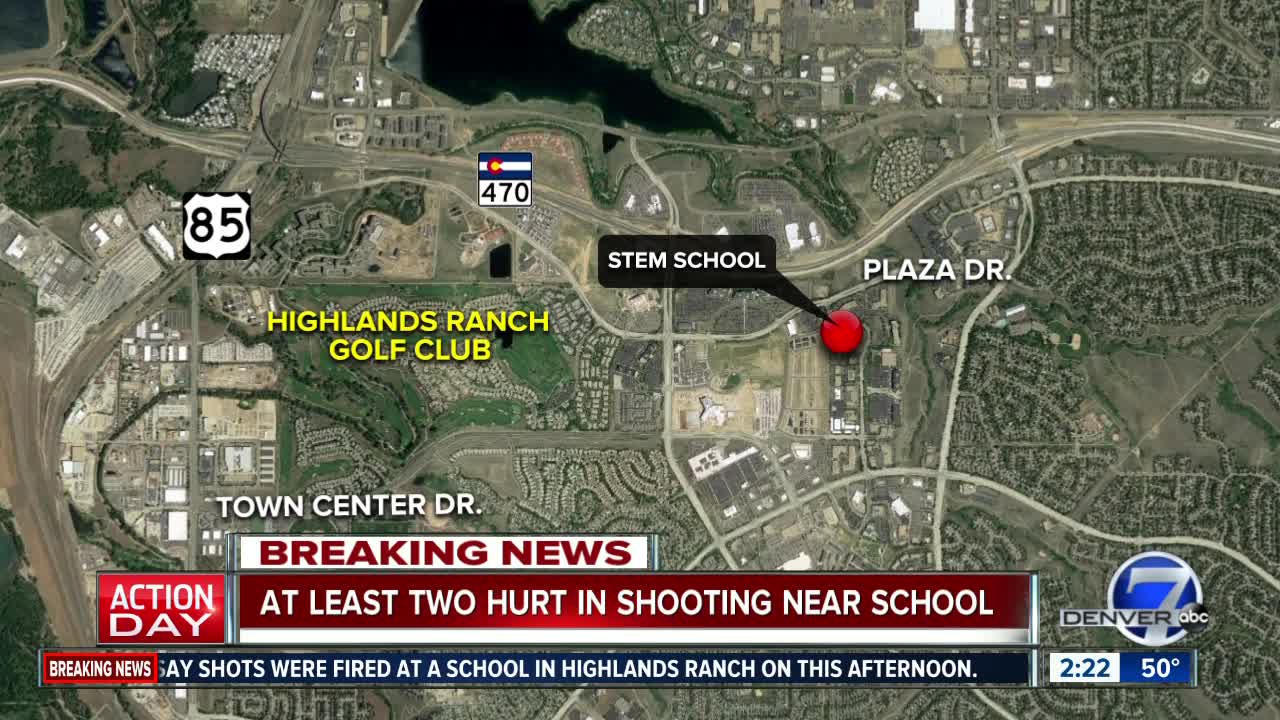 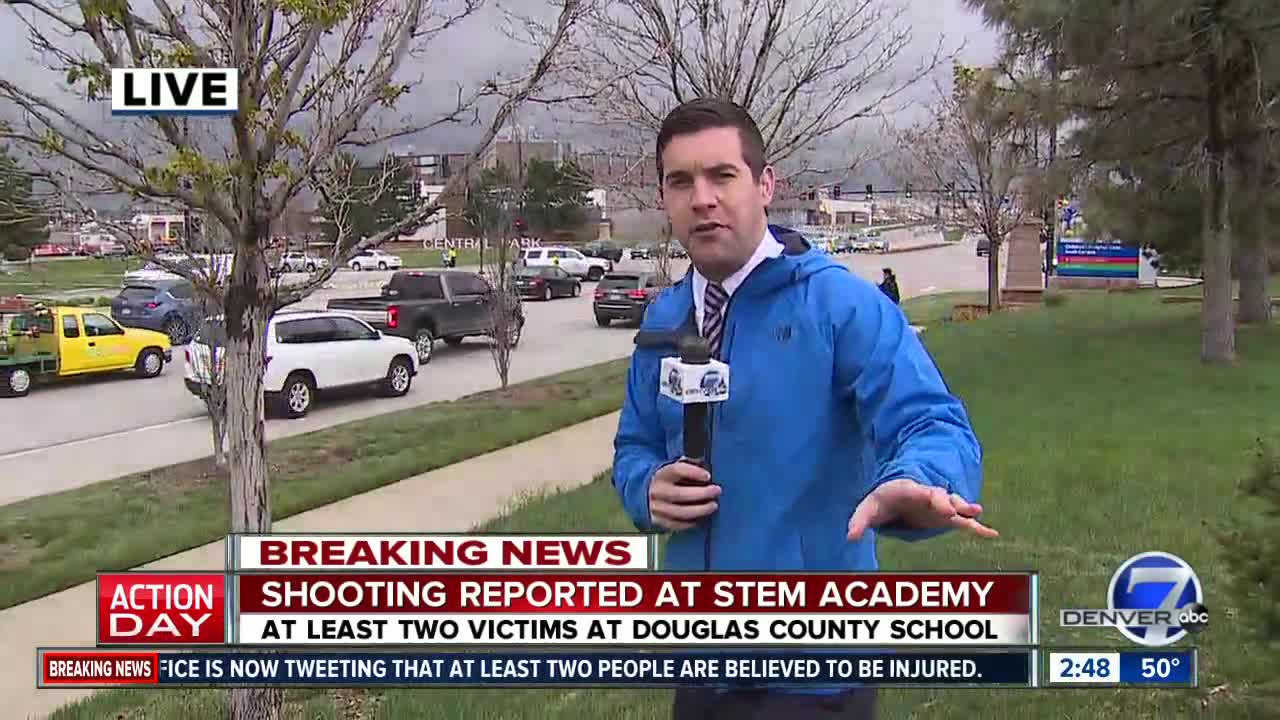 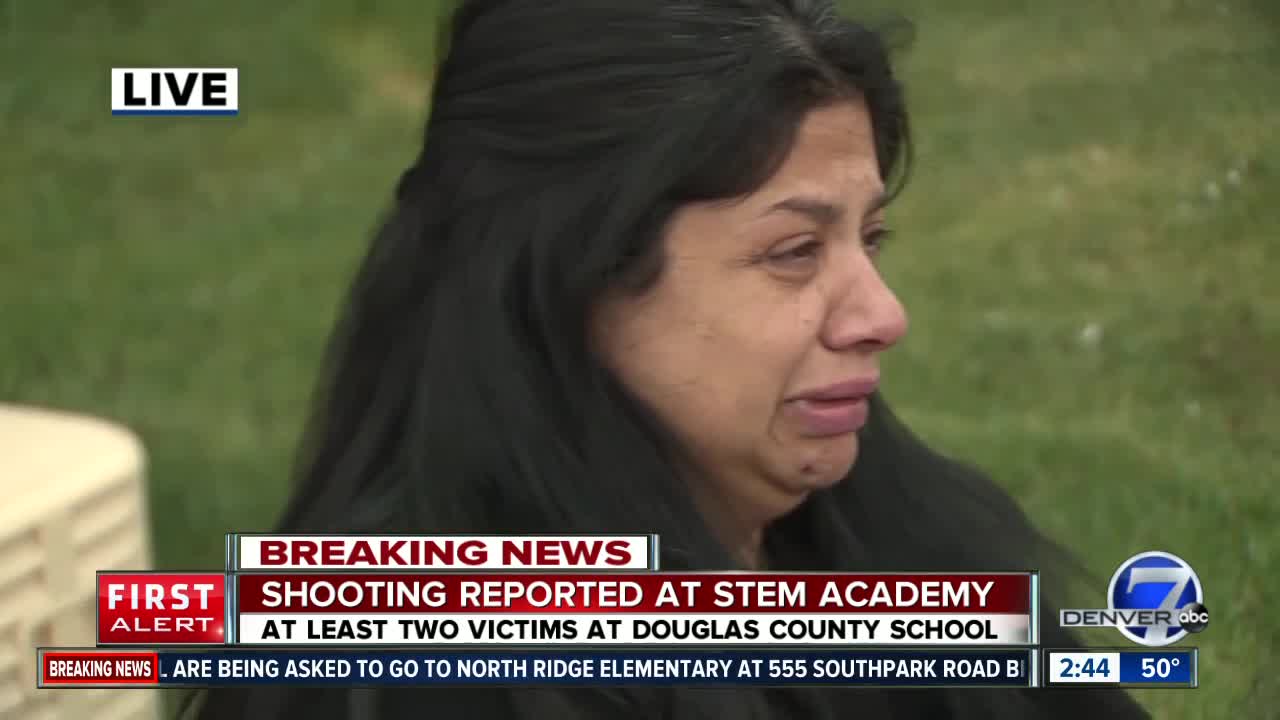 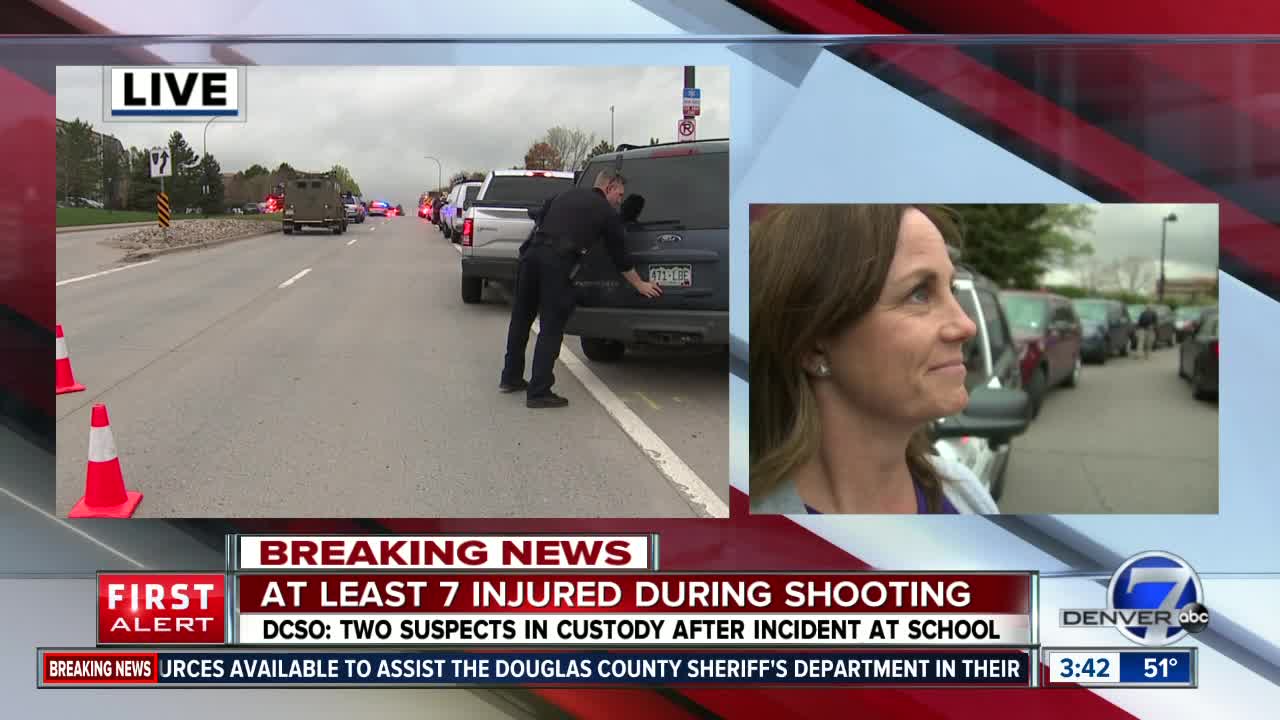 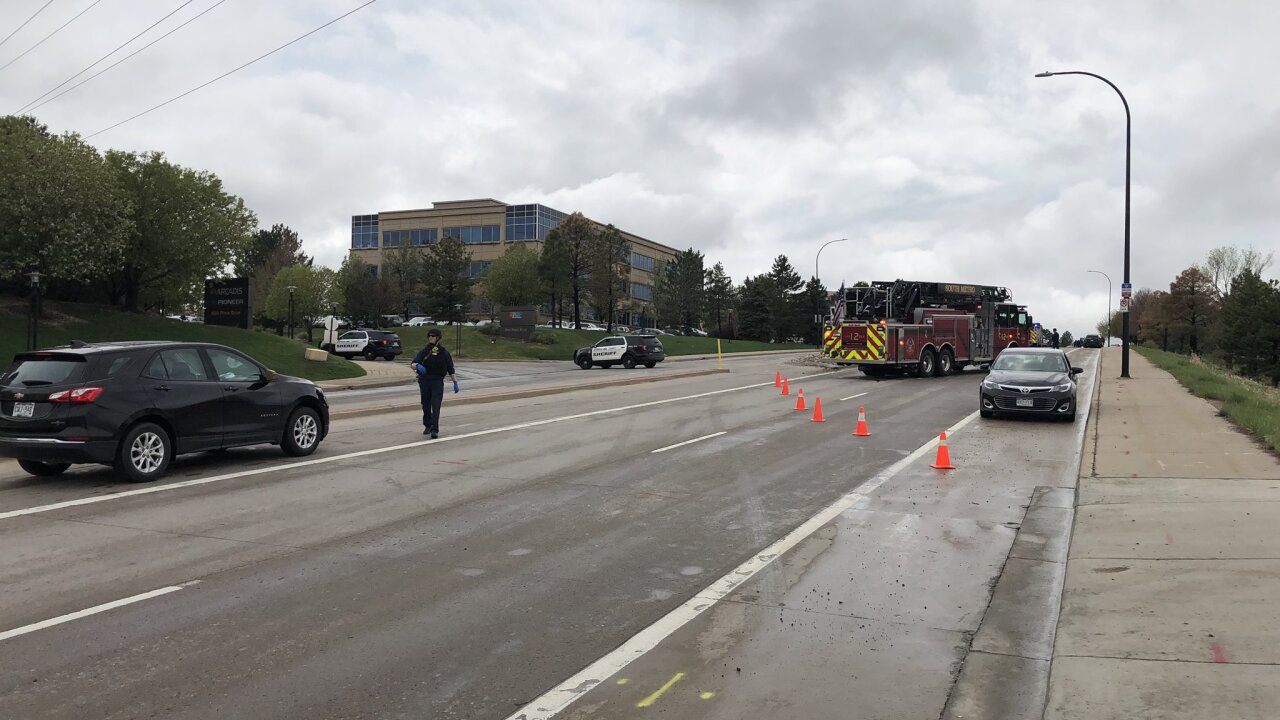 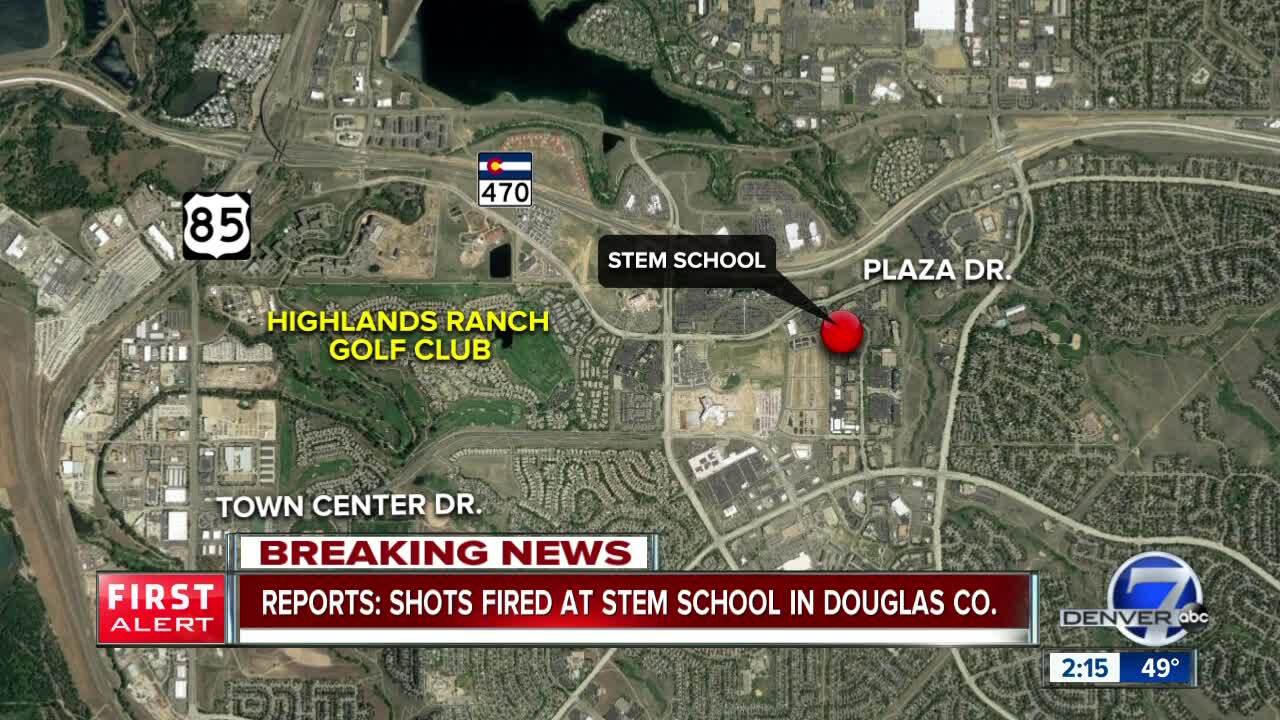 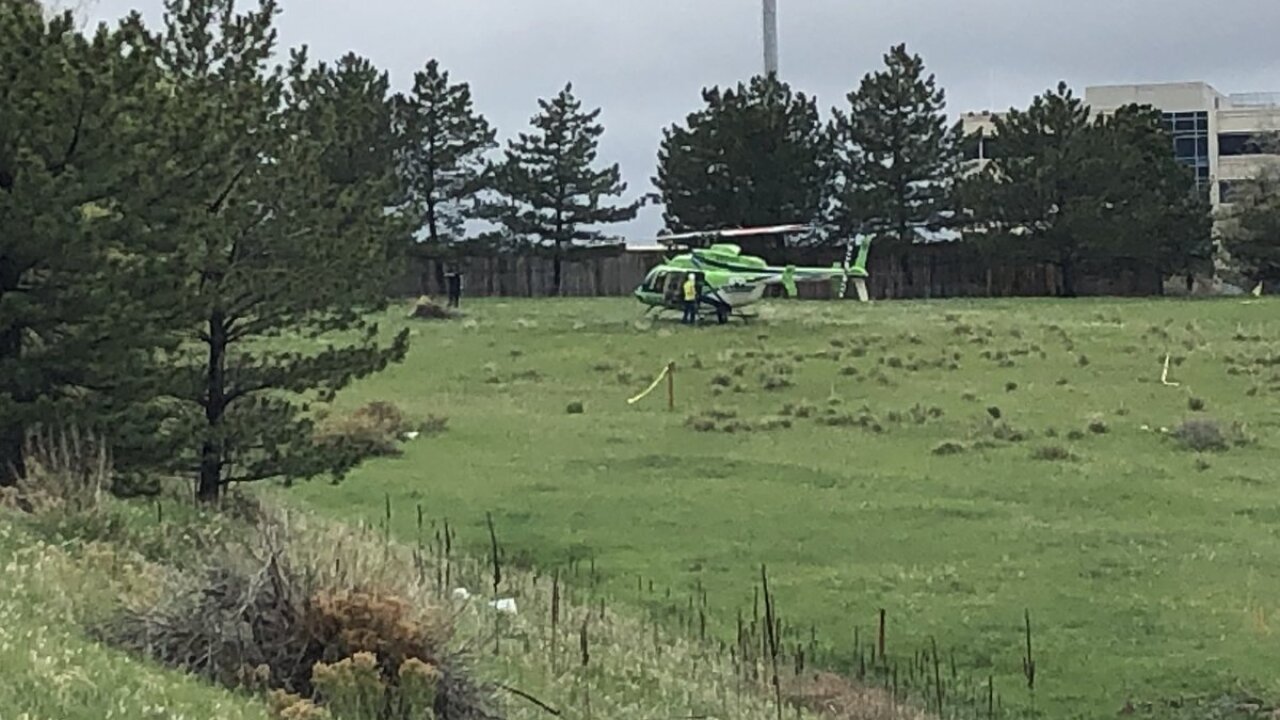 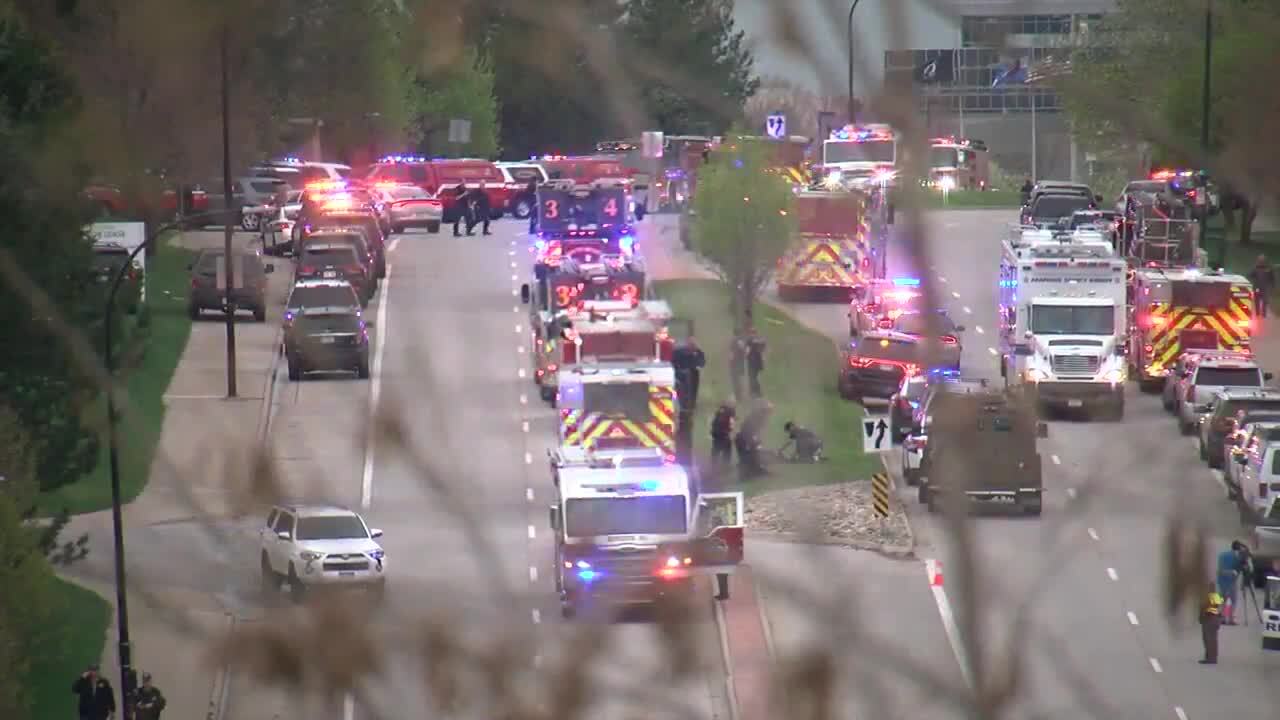 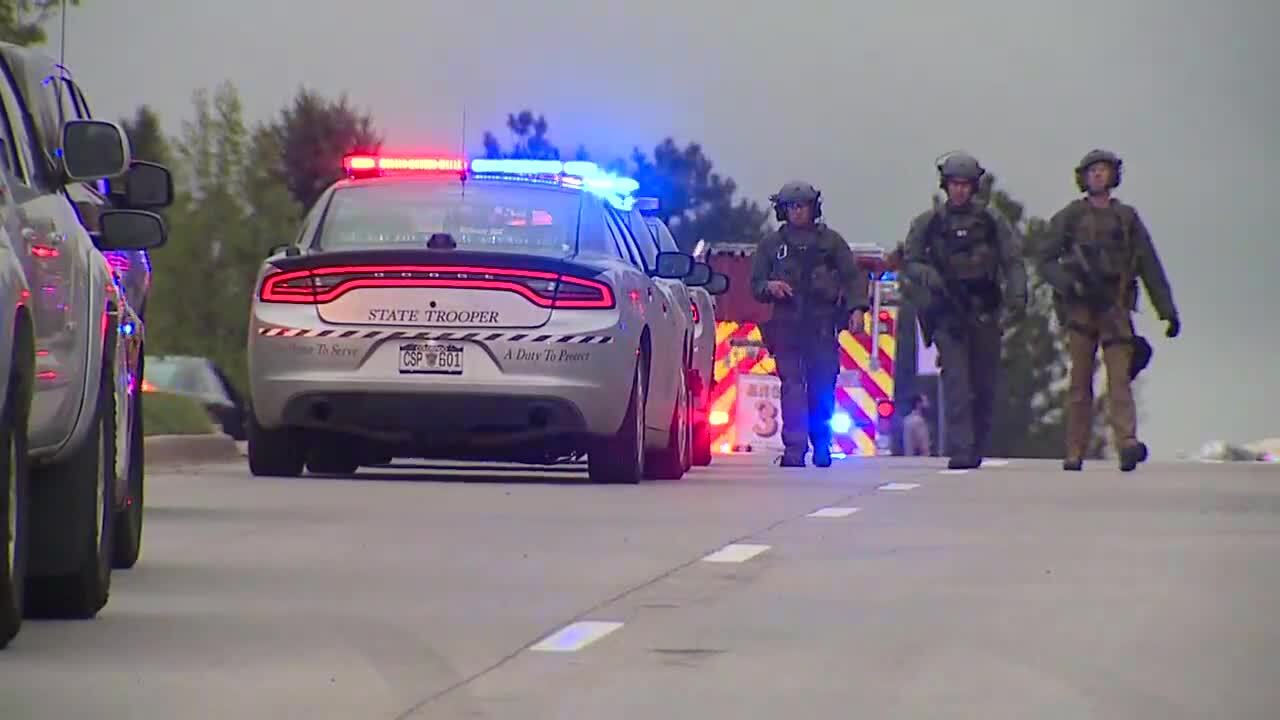 HIGHLANDS RANCH, Colo. — An 18-year-old male student was killed, eight others were injured and two suspects were in custody in the shooting at STEM School Highlands Ranch on Tuesday afternoon, according to the Douglas County Sheriff's Office.

The victims' names have not been released.

Douglas County Sheriff Tony Spurlock said the suspects – a juvenile and an adult – were believed to be students at the school. Spurlock said there were no other suspects in the case, but authorities were still investigating at the scene.

On Wednesday morning, Spurlock and other authorities released more details about the investigation and said at least one of the suspects would appear in court.

According to a source with knowledge of the investigation, one of the suspects is an 18-year-old senior who was a student at the school. According to a criminal background check, his only prior run-ins with the law include citations for careless driving and driving an unsafe vehicle.

"We will not be releasing any photos at this time as it could jeopardize this critical on-going invest.," the sheriff's office tweeted. "We still have interviews to conduct and we want to make sure we have the most accurate information."

A source told Denver7 that investigators were using a bomb robot near one of the suspect's vehicles because tactical gear was found inside. Authorities had found the vehicle in the parking lot of the school and were working to obtain search warrants for the car and the suspects' homes.

At 6:30 p.m., law enforcement officers were at a home believed to be linked to Erickson, near West Highlands Ranch Parkway and West Wildcat Reserve Parkway in Highlands Ranch. Just before 10 p.m. a car spray painted with a message saying "F--- society" was towed from the home.

Multiple sources close to the investigation told Denver7 late Tuesday night that the second suspect, who is a minor, is a transgender male who was in the midst of transitioning from female to male.

The sources said that the motive of the alleged shooters went beyond bullying and involved revenge and anger towards others at the school and that at least one of the suspects was involved in legal and illegal drug use and had been in therapy.

Authorities recovered three handguns and a rifle but said the rifle was not used in the shooting. They are looking for more guns, one ranking source said.

Spurlock said eight students were injured in the shooting and they were all 15 and older. The student who was killed was an 18-year-old male, authorities said.

Kendrick Castillo, 18, is the student killed in Tuesday's shooting, his parents said. John Castillo said his son was on the school's robotics team and shared photos of Kendrick attending prom with his friends in recent weeks. Castillo was one of nine people who were shot at the school.

As of 6 p.m., two of the victims were in serious condition at Littleton Adventist Hospital, officials said, and three had been released from the hospital. One victim was in good condition at Children's Hospital. Two other victims were at Sky Ridge Medical Center and listed as "stable," but their conditions were unclear.

Spurlock said the suspects walked into the building, "got deep inside the school" and shot at students at two separate locations. The shooting was reported shortly before 2 p.m., and deputies arrived about two minutes later and engaged the suspects, taking them into custody, Spurlock said.

The STEM school, which has about 1,800 students from kindergarten through high school, is located off South Ridgeline Road and Plaza Drive in Highlands Ranch.

The school did not have a School Resource Officer assigned to the building, but it did have private security, Spurlock said.

Department of Homeland Security, FBI and ATF agents also responded to the school to help with the investigation.

More: Talking to your kids about the STEM School shooting

The school was placed on lockdown after the shooting, and parents were being directed to meet their children at Northridge Rec Center at 8800 S. Broadway.

School will be closed for rest of week, district says

The Douglas County School District sent an email to parents and students late Tuesday saying that the school would be closed for the rest of the week but other district schools would be open with extra security on-site. It also issued a statement just before midnight:

"After today's tragedy, we are grateful to all of you for your expressions of support for our students, families, staff and school communities. Like you, we extend our sincere condolences to the STEM School of Highlands Ranch and all those affected by this violence within our school district. Administrators, teachers and staff within all of our Douglas County schools provide extraordinary support to our students every day. Today was no exception.

From the leadership of our Superintendent and his team, to the teachers in our classrooms, to the bus drivers on our roads, and to all the staff in between, we are grateful for you. We are also thankful for the many law enforcement and medical personnel who responded to the needs of students and staff at STEM School of Highlands Ranch.

Thank you all in advance for caring for our students through the challenging days ahead. Please also take time to care for yourself. We are all one DCSD family."

In the letter from the superintendent issued earlier Tuesday night, he district said it will have a crisis support center available to all STEM School students and families at the St. Andrew United Methodist Church in Highlands Ranch starting at 8 a.m. Support staff will also be available at the school.

The district is asking for new or gently used blankets to be donated for STEM students, staff and families to give out at the crisis support center. Anyone who wishes to donate can drop the blankets off at the school district's building, located at 620 Wilcox Street in Castle Rock, between 9 a.m. and 11 a.m. Wednesday.

“Our hearts are with all of STEM’s students, families and staff during this incredibly sad time. Supporting one another in the coming days, weeks and months is critical,” he added.

“As parents, you are the very best support system in meeting your child’s needs. You can provide the best explanation that fits with your values and beliefs, knowing that other parents may share this information with their children, and informal discussions may take place between students. You may wish to have a family discussion to talk briefly about loss of life and to acknowledge any feelings that may surface. Knowing what to say to your child is often difficult. When no words come to mind, a hug may provide comfort. Below are a number of resources that may help you when talking to students, or processing today’s tragedy.

“Feelings can be especially overwhelming at a time like this. There is no right way to express the sadness, grief and confusion that students will feel when they encounter a tragedy. For example, students may react by needing more sleep or being more emotional. On the other hand, a student may not react outwardly at all. Students can be particularly vulnerable if this event reminds them about another loss or sadness in their own lives.

“Expect that resolving the feelings related to this tragedy may take time. It is normal for a child to bring up the tragedy after it has happened and often when least expected.

“We are a united family. We are here to support each and every one of you - students, parents and staff - and will continue to do so as long as needed. Together, we will get through this difficult time.”

Kelley Paulson, the mother of two students at STEM School Highlands Ranch, spoke to Denver7 about what she knows about the shooting and said she was still waiting to hear about one of her children.

"I got a text from a friend who was actually in there," Paulson said. "She said 'guns, shooting, oh my god, oh my god.' And she could hear them and that's how I first knew. The next thing I know, I heard my son, who is calling me because all of the kids who were in middle school...all immediately ran out of the building."

Paulson's son, Christian, said he was in study hall at the school when he saw "a bunch of kids running out and saying 'School shooter, school shooter!'"

"And I'm like, what? Is this real or fake? And then I just went after them," Christian Paulson said. "And apparently, this is all real. And I tried to run with my life, but I'm out of breath."

President Donald Trump had been briefed on the shooting, and the White House was in contact with Colorado officials.

“Our prayers are with the victims, family members, and all those affected by today’s shooting at STEM School Highlands Ranch in Littleton, Colorado," White House Deputy Press Secretary Judd Deere said. "Tragically, this community and those surrounding it know all too well these hateful and horrible acts of violence."

Gov. Jared Polis issued a statement as the shooting was unfolding Tuesday afternoon.

“We are making all of our public safety resources available to assist the Douglas County Sheriff's Department in their effort to secure the site and evacuate the students. We are monitoring the situation in real time. The heart of all Colorado is with the victims and their families.”

“It is with broken hearts that we respond to the news coming out of Highlands Ranch. We still don’t have all the details regarding the situation at STEM school, but we do know this: we have a public health crisis on our hands. This cannot continue. It is not enough to send thoughts and prayers, it is empty, it is weak, and it does an injustice to our children who are on the frontlines of this violence,” Crow said.

“We must pass common-sense gun violence laws and ensure we are preparing our educators and law enforcement with the tools and resources necessary to create a safe and welcoming environment. This must stop," he added.