Copyright 2021 Scripps Media, Inc. All rights reserved. This material may not be published, broadcast, rewritten, or redistributed.
Denver7
Anthony Tesoriero killed 10-year-old Ty Tesoriero two weekends ago, less than 24 hours after he and his ex-wife, Jing Tesoriero, appeared in court for a custody hearing in which Anthony learned he would lose custody of their son. Denver7 has been working since the murder to understand how and why the boy’s father was able to retain custody of Ty after the hearing as Jing and her attorney plead for answers amid a state investigation into what happened. Case documents and interviews with people involved are helping piece that timeline together.

DOUGLAS COUNTY, Colo. – The man who killed his 10-year-old son and then himself late last month as he was set to lose full custody of the boy bullied case workers and displayed “disturbing” behavior toward his son that the county’s department of human services should have taken more seriously, according to a professional who worked on the case and emails and documents obtained by Denver7.

Anthony Tesoriero killed 10-year-old Ty Tesoriero two weekends ago, less than 24 hours after he and his ex-wife, Jing Tesoriero, appeared in court for a custody hearing in which Anthony learned he would lose custody of their son.

Denver7 has been working since the murder to understand how and why the boy’s father was able to retain custody of Ty after the hearing as Jing and her attorney plead for answers amid a state investigation into what happened. Case documents and interviews with people involved are helping piece that timeline together.

MORE: Colorado mother tried for 15 months to protect murdered son from ex, but 'nobody wanted to investigate'

A professional who worked on the case said in an interview this week that the Douglas County Department of Human Services (DHS) failed Ty Tesoriero and gave in to his domestic abuser of a father, allowing him to work the system in his favor.

“Maybe they were scared of him. He had way more power than he should have ever been given,” the woman said.

She spoke to Denver7 on the condition of anonymity, saying she feared retaliation for speaking out about the case and wanted to protect her family. But she was clear that she chose to talk about her experience to try and prevent a similar ordeal from happening again.

“My first thought was how the heck did he go to unsupervised visits,” she said. “How did he have the opportunity to kill his son?”

During an interview this week, the woman went back to 2016, when social services first got involved in the case and when DHS workers were investigating if Anthony was fit to be a parent after a court ordered him to have supervised visits only with his son.

“I witnessed military punishment: sit-ups, push-ups. At one point, I witnessed him taking food from the child,” she said.

She wasn’t the only one who reported disturbing behavior between Anthony and Ty. A September 2016 report from a visitation supervisor detailed how Anthony appeared to have a short fuse with his son during a visit, “grabbing the child’s arm too tightly,” and growing even angrier when a case worker told him that the visit would end if his behavior toward Ty continued.

“[Anthony] then jumped up and said, ’You want to end the visit? Fine!’ and threw the dinner away and stormed out,” says an observation sheet from the September 2016 supervised visitation. It also says that Ty was crying and told his father, “Just stop it papa!” during the visit, according to the observation sheet.

It also recommended “anger management and parenting classes” along with a “safety plan.”

MORE: 'Nobody did anything': Colo. mother says system failed to protect her murdered son

The professional who worked on the case and spoke with Denver7 says she can’t understand how the court could grant Anthony 50-50 parenting time.

She said she was “shocked” when she saw initial reports about the murder-suicide that Anthony had unsupervised custody at all and said that he used threats as a weapon to get his way and manipulate the system. 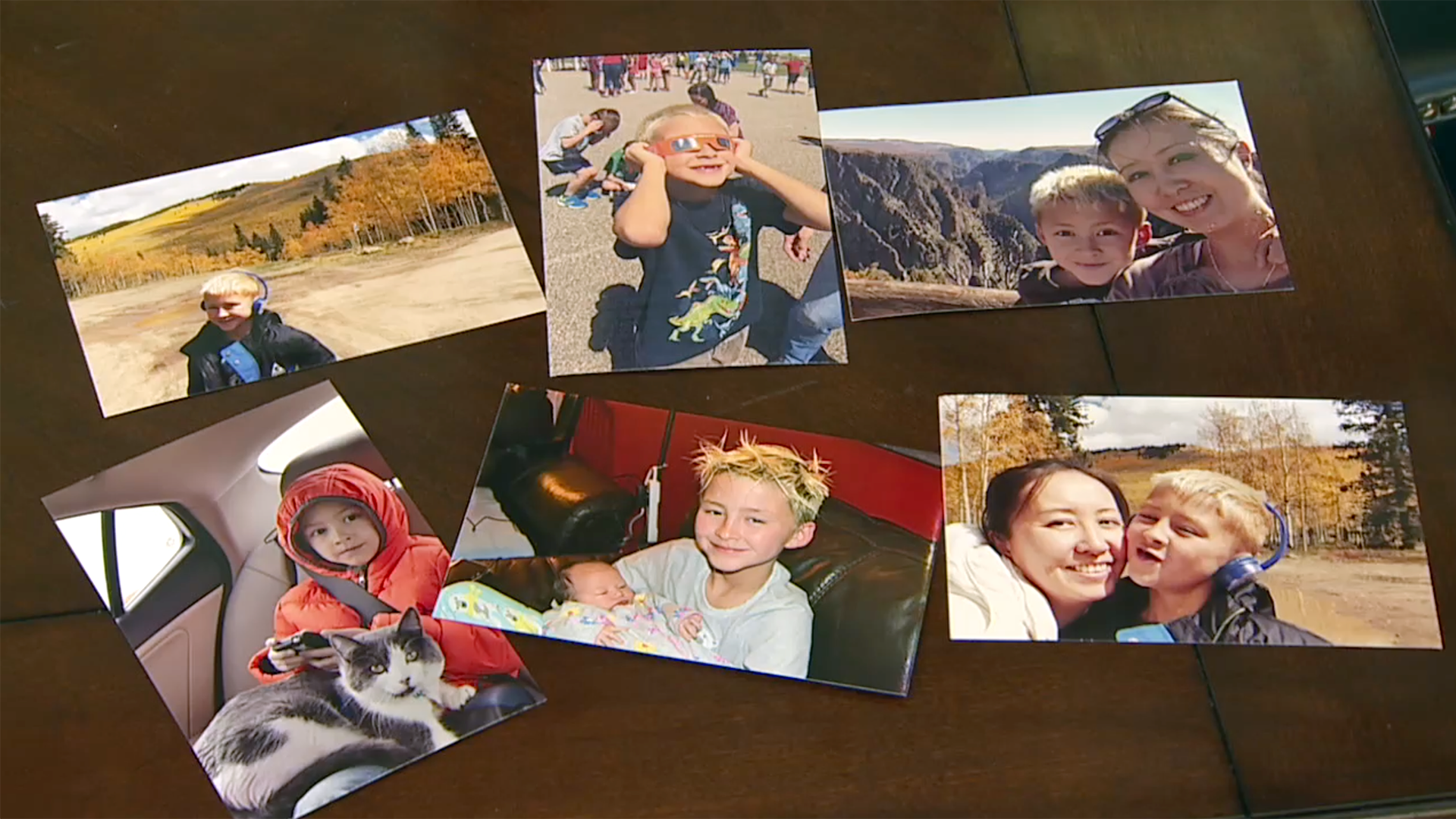 She says Anthony stalked her and her family members in order to try and instill fear in them, telling her things like “I saw your German shepherd in the backyard last night,” and, “How’s your husband doing?” She said he would give her husband’s name.

DHS was aware of the concerns as they were documented by case workers, the woman said.

“They were also well aware that he had done it to their own caseworkers,” she said.

But she added that the department did little or nothing.

Instead, she says those threats got her and other professionals booted from the case – exactly what Anthony wanted for anyone whom he felt was not “in his corner,” the woman said.

In a July 2016 letter, Ty’s pediatrician wrote to Jing Tesoriero telling her that he was discharging Ty from his care by the end of the month because of verbal abuse from Anthony.

“As you know, his father has previously threatened my office manager with a lawsuit for putting his child on ADHD medication (even though he does not have medical decision making authority.),” the doctor wrote. “Now he has resorted to defaming me and harassing my patients on the internet. I was able to block him and remove his comments, but I took a screen shot first. I am enclosing copies of the screen shots for you to share with your legal counsel.”

He said that he enjoyed caring for Ty but that he “cannot tolerate this type of verbal abuse from his father.”

“I am sorry that his father is interfering in his care and harassing me online,” the doctor wrote. “The best course for Tiberius’ well-being is a cooperative co-parenting situation. I hope that this eventually is the outcome for you and Tiberius.”

The professional who was formerly involved in the case said Anthony would manipulate people until he got what he wanted.

In an email sent to the child family investigators in the most recent case from an anonymous address that was tied to Anthony by Jing’s attorney, he wrote: “We are watching your [child family investigation] of Tiberius Tesoriero very carefully. … If even one of your actions or recommendations brings harm to the child, there will be ramifications for you and yours for many years to come.”

The threatening email and other threats to the investigator’s life would lead to him being taken off the case as well – another part of a broader pattern that the professional who spoke with Denver7 said was not taken seriously enough by DHS.

MORE: Man who killed son, himself should not have had gun due to law regarding domestic violence abusers

When asked for comment, DHS said it could not discuss child welfare matters. But an email sent from Douglas County’s senior DHS attorney, John Thirkell, tells its own story.

Jing Tesoriero’s attorney, Caroline Cooley, told Thirkell that Anthony had killed Ty and that she was having difficulty processing the news.

“There are many ‘what ifs’ in this tragic situation, but there is one certainty. Only one person is responsible for the tragic loss perpetrated here,” Thirkell wrote in response. “We’re grieving and praying at our end as well, that God has swiftly rescued the soul of an innocent. We can certainly talk in the days [ahead] to try and process the unfathomable act of evil.”

In addition to the custody questions and those involving how Douglas County DHS handled the case, there are still questions about why Anthony was able to retain weapons that should have been taken from him under a state law because he had a mandatory protection order for domestic abuse issued against him.

The State Department of Human Services is investigating Ty’s death in accordance with a state law that requires a review of a child’s death. But Jing and Cooley have asked for an independent investigation, saying they don’t believe the state is capable of investigating its own.

The governor’s office stopped short of calling for an independent investigation but said it is closely monitoring the state’s investigation. A spokesman for Gov. Jared Polis said last Thursday that his office "will do everything in our power to make sure the process [of the investigation] is as robust as possible."

But the professional says this case shows the system is broken and laws need to change.

“There were enough warning signs for this child not to go back to him.”