During their visits, inspectors did not note any major problems that would have pointed to a cause of the fire, an analysis of the records by Contact7 Investigates shows.

Records show ADC Construction was granted a contractor’s license in Denver in January.

The Class A license allows the contractor to build both residential and commercial construction.

“Class A contractors have extensive expertise in engineering or supervising the construction of multi-story and high-rise structures,” Laura Swartz, with Denver’s Community Planning and Development office, told Denver7.

The city has 66 inspectors who focus on construction, electrical, mechanical and plumbing inspections, Swartz said.

The following is a breakdown of the number of building permits issued by month, according to the city. 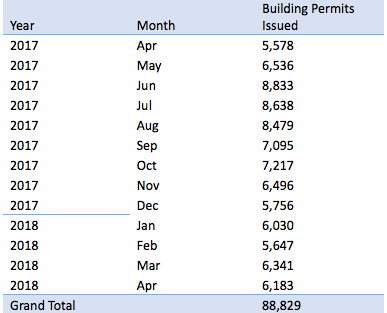 Firefighters said the two buildings that were destroyed were townhouses under construction.

The development, called Denver Grove, was slated to include 14 townhouses ranging in price from $681,000 to $767,000. The development was set to open in late spring.

The third building, a home, sustained some damage. A family inside the home was able to evacuate the building safely.

There were no reports of injuries.