Gov. Polis announces distribution of $1.6B in federal CARES Act aid, much to Colorado education

Polis says he has authority to distribute funds, but GOP balks at actions 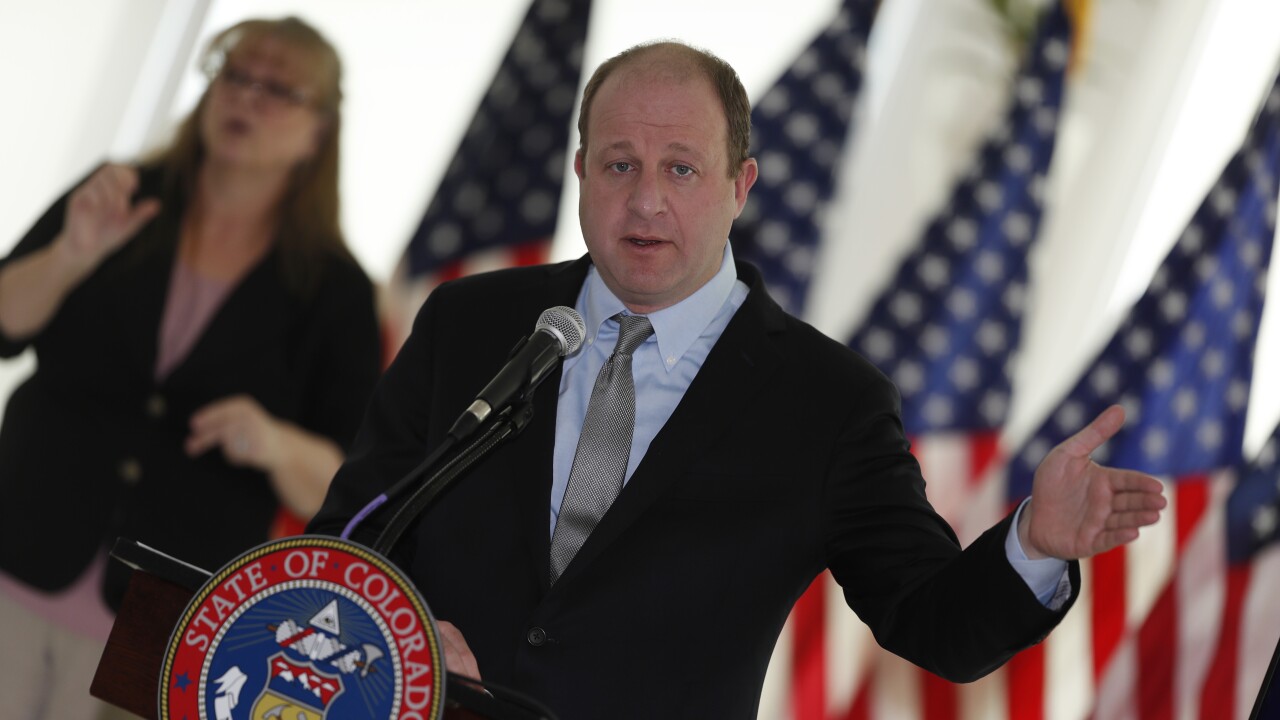 (Copyright 2020 The Associated Press. All rights reserved. This material may not be published, broadcast, rewritten or redistributed.)
David Zalubowski/AP
Colorado Governor Jared Polis makes a point during a news conference as a statewide stay-at-home order remains in effect in an effort to reduce the spread of the new coronavirus Wednesday, April 8, 2020, in the governor's mansion in Denver. The new coronavirus causes mild or moderate symptoms for most people, but for some, especially older adults and people with existing health problems, it can cause more severe illness or death. (AP Photo/David Zalubowski)

DENVER – Gov. Jared Polis and Democratic leadership on Monday night announced how the state will allocate $1.67 billion in federal CARES Act funding for the state’s response to COVID-19 and the economic crisis the outbreak has caused.

The executive order issued by Polis says that $48 million for FY2019-20 and $157 million will be put toward the state’s Disaster Emergency fund to address medical and public health needs in responding to the COVID-19 outbreak.

The order comes as the Joint Budget Committee worked Wednesday to continue making cuts to finalize the state budget for next year, with the state facing a forecast $3.3 billion revenue shortfall.

Another $70 million will be transferred into the state’s General Fund for eligible expenditures, according to the order, and $275 million of the money for this fiscal year and next will remain available for local governments that did not receive direct funding in the CARES Act, the order says. That money will be distributed at the recommendations of a consortium of local government officials and based on other states’ best practices.

“This immediate disbursement ensures that no Coloradan has to go without a hospital bed when they need one, that the state can continue to scale up testing and containment, and protect our most vulnerable,” Polis said in a statement. “It allows parents to return to work by ensuring that our schools have needed resources to adapt to our new reality and helps our frontline local governments in their coronavirus response.”

The order transfers a total of $8 million from the federal funding toward the Colorado Department of Corrections to help them comply with public health orders surrounding veterans living and other state-run congregate care facilities during the virus outbreak. And additional $2 million over this fiscal year and next will go toward the Department of Human Services (CDHS) for similar purposes, according to the order.

The CDHS will also receive $22 million of the funding for increased caseloads expected because of the economic downturn.

The Colorado Department of Local Affairs will get $10 million for the current fiscal year for emergency rental and mortgage assistance for people with low and moderate incomes and to offer direct assistance to people impacted by the outbreak who are not eligible for unemployment, food benefits or direct federal stimulus payments, according to the order.

About $85 million this fiscal year and next will stay available “for payroll expenses and other necessary expenditures for public safety, public health, health care, human services, and similar employees whose services are substantially dedicated to mitigating or responding to the COVID-19 emergency,” according to the order.

The biggest chunk of money will go toward funding K-12 and higher education, however, which House Speaker KC Becker, D-Boulder, said would be beneficial in helping schools and universities “prepare for the fall so parents can go back to work and we can rebuild our workforce.”

The Colorado Department of Education will receive $37 million for next fiscal year “for expenditures incurred to respond to second-order effects … in particular the increased number of at-risk pupils due to the COVID-19-driven recession” the order states.

The CDE will also get $510 million from the federal funding to facilitate distance learning and social distancing, prevent lost learning hours and increasing free teaching hours for K-12 students.

The order says that the funds will be distributed to local school districts on a per pupil basis and proportionately by student population for certain schools.

The Colorado Education Association praised the inclusion of the funding for K-12 learning in the allocation.

“Districts were planning to make draconian budget cuts and this money will help cushion the blow to keep educators in their jobs and keep students learning,” CEA president Amie Baca-Oehlert said in a statement. “When school begins in August, these funds will be crucial in providing educators the necessary resources and supports to help students catch up due to distance learning this spring. These funds will address the increased mental health needs of students recovering from trauma and prepare schools to operate under the potential of new social distancing requirements.”

The Colorado Department of Higher Education will also receive $450 million in funding to increase student retention and completion at public higher education institutions and to be sure the schools can comply with public health orders. Any institutions that receive the funds will to be able to raise their undergrad tuition rates by more than 3% of what they were in the FY2020-21.

Senate President Leroy Garcia, D-Pueblo, said that the funding would help the state but was “nowhere near enough in terms of recovery.” He, as have other local and legislative leaders, asked Congress to give more direct flexible funding to states and local governments in the next funding package.

Colorado Senate and House Republicans were not pleased by the governor’s order, which they said was issued Monday night without input from their side of the aisle or full input from lawmakers.

“The staff and members of the Joint Budget Committee, liaisons for dozens of state departments and programs, and representatives from every sector of our society have been hunkered down for the last two and a half months attempting to develop a budget despite historic decreases in revenue,” Sen. Bob Rankin, R-Carbondale, said in a statement.

“For the Governor to announce this allocation of funds – without so much as consulting the chief budgeting body – is not only a lapse in leadership but has now eliminated the people’s voice over how their money is spent. To say that I’m disappointed would be putting it lightly. How do we build a budget around the whims of one man with no deliberative process?” Rankin, who is also a member of the Joint Budget Committee, said.

House Minority Leader Patrick Neville, R-Colo., similarly said that they felt Polis had walked back a statement he made in April, when he said that the state legislature "decides how state revenues are spent." Republican leadership held a news conference Monday to discuss their agenda for passing a balanced budget, as is required by the state Constitution, when lawmakers return to the Capitol next Tuesday.

U.S. Rep. Scott Tipton, R-Colo., who wrote to Polis in April with concerns about the way the state might handle doling out the funds, said Tuesday that the U.S. Treasury Department should look into the executive order to see if it is meeting the conditions of the dispersal of the federal money – particularly surrounding the student retention and completion portion of the order.

“Nothing about this executive order is collaborative or bipartisan, and local officials I have heard from-on both sides of the aisle-have expressed frustration about being kept in the dark. I hope the Governor has answers to the questions our communities will undoubtedly ask about the use of the relief funds,” Tipton said in a statement.

Polis wrote in the order that he has the authority to direct the expenditure of the money. He said in issuing the allocation order Monday night that he continued to work “closely in a bipartisan way with the federal delegation and legislative leadership” during the COVID-19 outbreak.

The order says that the Governor’s Office of State Planning and Budgeting has the final authority “for resolution of any issues that may arise during the expenditure or allocation of these funds.”