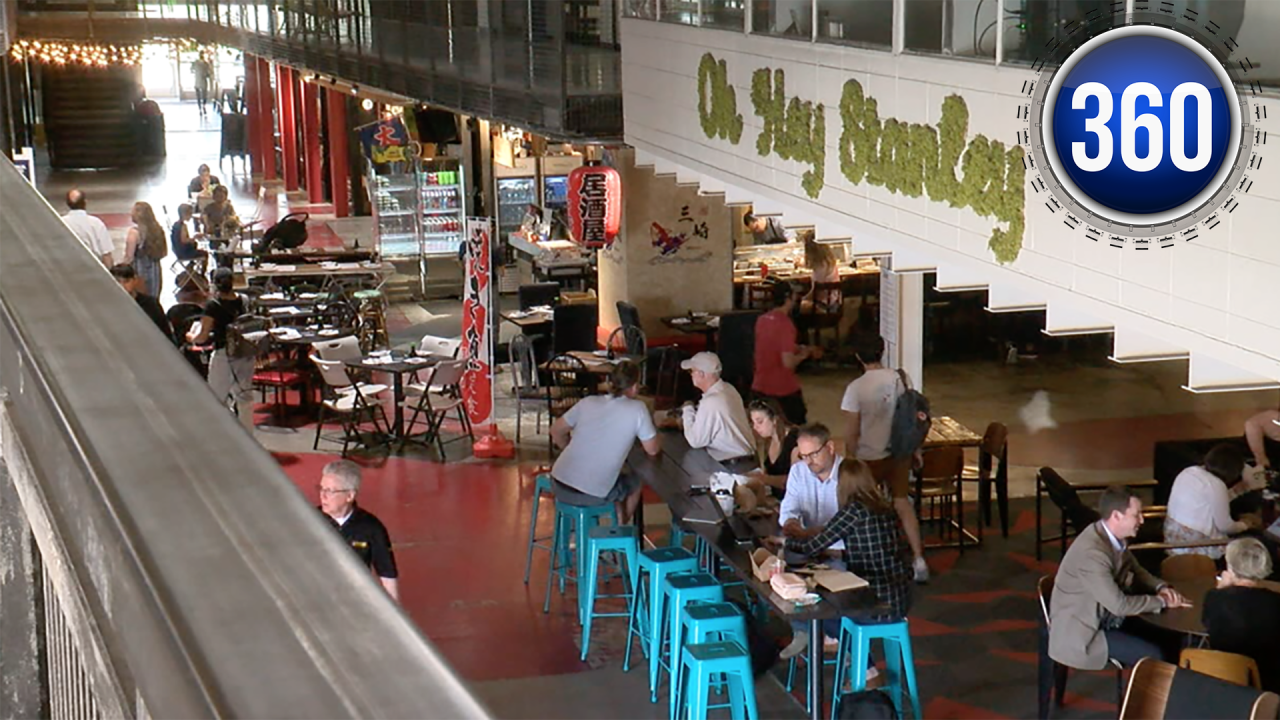 Copyright 2020 Scripps Media, Inc. All rights reserved. This material may not be published, broadcast, rewritten, or redistributed.
Denver7
The city of Denver is considering a proposal to allow common consumption of alcohol in certain places. The idea is to allow a group of businesses, bars or restaurants to come together to seek a license to create an area where people can drink beverages from different establishments together. 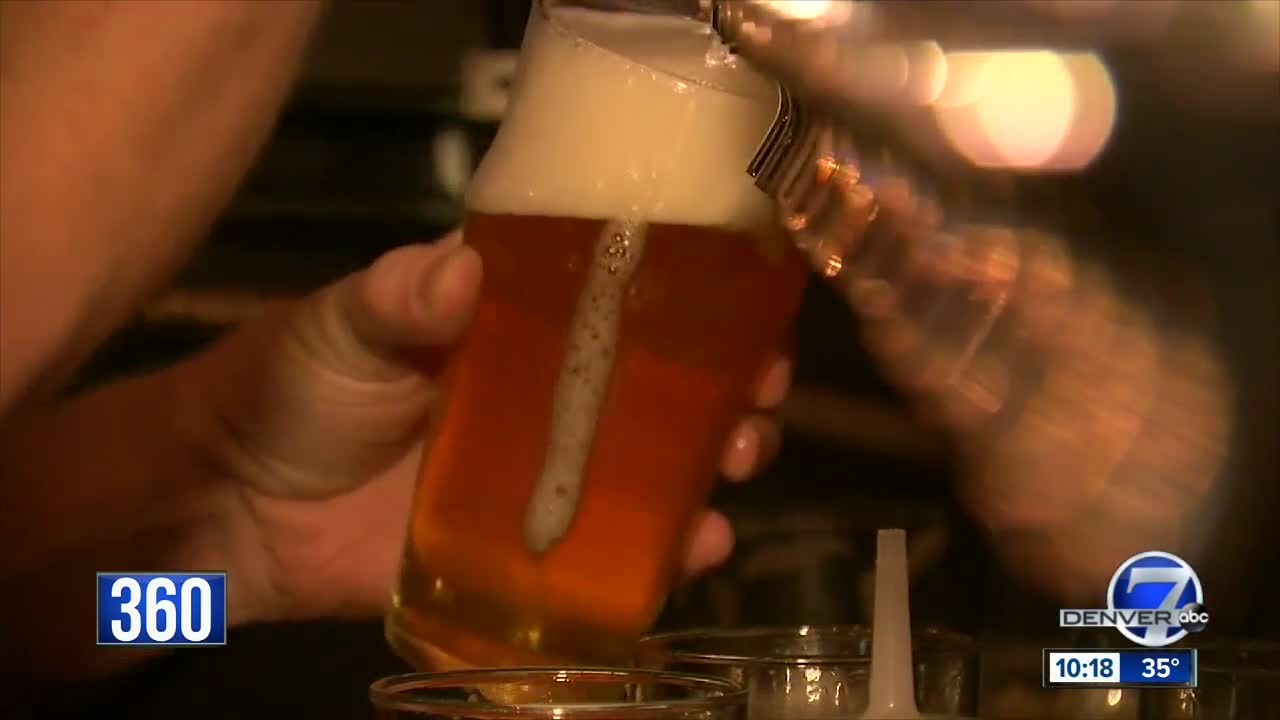 DENVER -- The Mile High City could soon become more boozy once you’re allowed to leave the bar with your drink in hand.

Some fear Denver will be like Las Vegas or New Orleans.

“It will not be a Vegas or a Bourbon Street,” said Ashley Kilroy, director of Denver’s Excise and Licenses department. “We know, in Denver, we have a lot of creative businesses and a lot of people interested in this. But, there must be strict protections for neighborhoods, as well.”

From beer halls to cocktail lounges, venues in places like Larimer Square, RiNo and South Broadway could band together and get one-year licenses to turn their "districts" into a street fest for drinkers.

So, we’re taking a 360 look at the issue with a neighbor who senses a brewing disaster, the city, which believes it’s a recipe for success, a bar that says it’s too much, another bar that says, "Bottoms up!"

Toast of the Town

But, we start in neighboring Aurora, where they’re already toasting the benefits.

“Really, there hasn’t been many issues,” said Mark Shaker, co-founder of Stanley Marketplace, which opened in summer 2017.

“You can walk around with your drink,” Shaker said. “If your kid is doing gymnastics, where you have an hour – you grab a glass of wine or beer on a Wednesday night. It just adds more flexibility and ability to roam the place without having to lock down.”

About the only thing you can’t do is walk into another restaurant or bar with your drink.

“I either have to leave my beer outside or dump it,” Shaker said.

Bars are required to pour drinks into plastic cups marked with their bar's name and/or logo if a customer decides to leave.

“You have to pour it into a plastic container. There were concerns someone would be walking around with a big hurricane like you do on Bourbon Street, but there have been no issues so far. No fistfights in our common areas,” Shaker said.

As for the clothing and specialty shops like Trunk Duvo, you can roam freely with a cold one.

“When it first started we were like, is everybody just going to be wasted coming into our store? Touching things and breaking things?” said Chris Bacorn who owns two stores in Stanley, Trunk Duvo and the men’s shop Squadron. “But, it’s been the total opposite. Everyone’s been respectful.”

Jody Bouffard is the owner of the LGBTQ bar Blush and Blu on Colfax.

“I’ve been at this location for 14 years,” Bouffard said.

She says if Aurora can do it, Denver can too.

“Especially on Colfax, to be able to have customers come in, get a drink and go watch any of the multiple parades that go on out here throughout the year,” Bouffard said, “It makes a lot of sense.”
She believes her patrons would be more than respectful.

“Go to Vegas. Do you see trash everywhere in Vegas? I mean, if I were able to take a drink inside a clothing shop, I would buy more clothes.”

But, right across Colfax at Streets of London, the bartending staff is putting the idea on ice.

“I don’t know that adding all that is a great idea,” said Lindsey Wise-Kirke, who has been in the service industry for 20 years.

“Keeping the booze inside is fine,” Wise-Kirke said. “We’ve got enough patios. I don’t know that we need a wandering-around, open-container-type situation.”

“We have enough problems already with people consuming alcohol in public,” McCaslin said. “Personally, I think it’s a really bad idea. Here on Colfax, we have a large population of homeless people that are already walking around drinking. If you put it in a plastic cup, that’s just going to make it legal for them to consume more.”

McCaslin also questions how it will be enforced.

“Who’s to say they’re not going to have a bottle in their pocket and pour their own into that plastic cup,” he said.

“It’s another risk,” Wise-Kirke said, “that we are responsible for, as far as third-party liability goes.”

The city of Denver believes it can make this work.

“We took our time to get this right,” Kilroy said.

The ordinance has passed the full city council, and now, Excise and Licensing is working on the rules — ones that will require a group of bars in any given area, like the Santa Fe Arts District, to have a plan.

The city says common consumption will also help to activate small bars and restaurants during events, rather than cutting them out.

“A community event where (the bars) are making money, not the beer truck from a brewery in Golden,” Kilroy said.

“It’s a tough thing,” Koehler said. “And we want to make sure it’s working for neighbors, also. Not just the bar owner.”

Koehler serves as vice president of Denver’s Inter-Neighborhood Cooperation. She still has a lot of questions — in particular, surrounding enforcement.

“I don’t know that the city will have more enforcement entities to deal with it or not,” Koehler said.

She currently sits on the board at Excise and Licenses as it works out the rules.

“I’m basically the only person who is a resident/neighbor dealing with it,” Koehler said. “Most of them are in the industry — bars, taverns that type of thing. So, that’s a concern as well. We have to make sure that it’s something that residents want.”

The city’s plan is currently for a five-year pilot program, which would then be revisited.

The Colorado state legislature approved the idea back in 2012.

Kilroy insists Denver’s ordinance will be regulated and licenses will be monitored closely.

“We can take action against their license at any time,” Kilroy said. “We can suspend it or revoke it. And we will double-check all complaints.”

Concurrent to any application, bars will have to propose an entertainment district where the consumption area will be located.

Time will tell whether the ordinance hits the spot or falls flat.

The finalized rules are expected to be unveiled in the late summer. A series of meetings about the issue are happening now through February. The application process is expected to open up sometime this summer, Kilroy said.