Copyright 2019 by Getty Images
Chip Somodevilla/Getty Images/Denver7
Just about anywhere you go these days, you are being recorded. From traffic cameras keeping an eye on roadways, to red light or speed cameras, to surveillance cameras on businesses, cameras are increasingly becoming part of Americans’ daily lives. 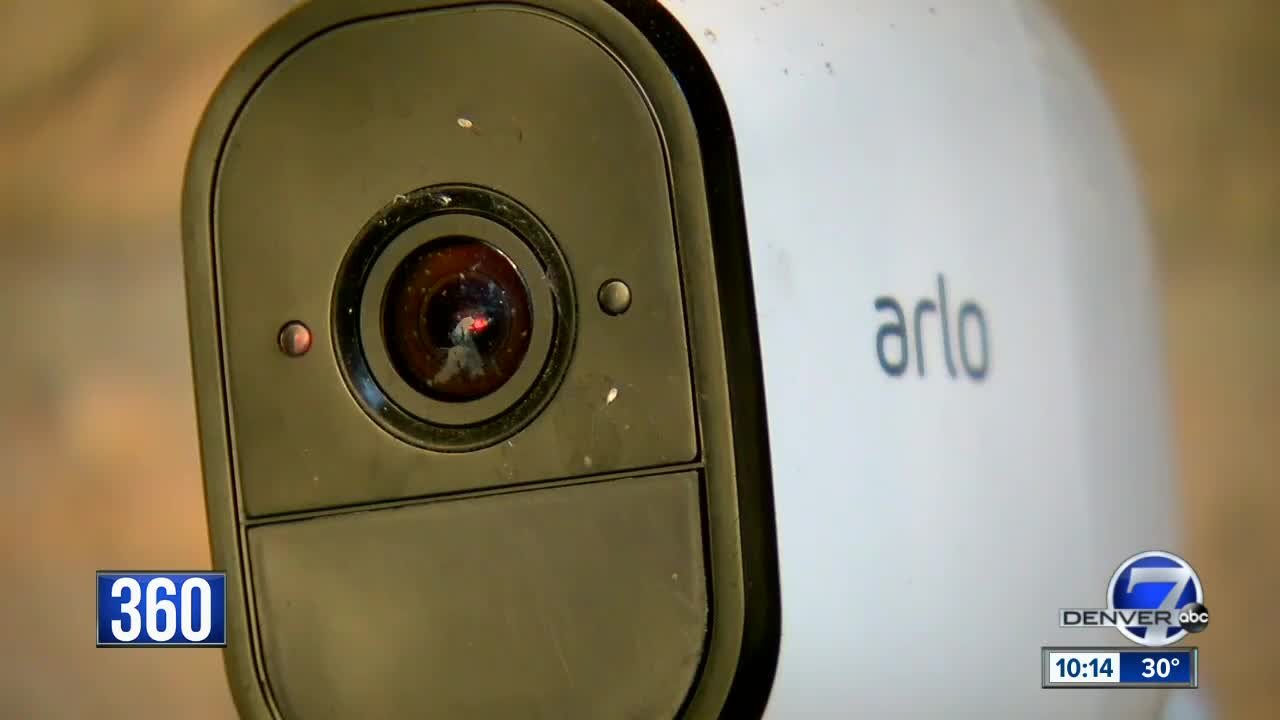 DENVER — Just about anywhere you go these days, you are being recorded. From traffic cameras keeping an eye on roadways, to red light or speed cameras, to surveillance cameras on businesses, cameras are increasingly becoming part of Americans’ daily lives.

Doorbell cameras are also popular among homeowners as the technology evolves and becomes more affordable.

These cameras have caught porch pirates, burglars and other would-be criminals in the act. The video of these crimes has served as critical evidence for law enforcement during their investigations.

Supporters of the technology say it increases security. Critics of these doorbell cameras say it’s an invasion of privacy and exposes people to risks like data mining or hacking.

To catch a criminal

Denver7 content producer Deb Stanley is one of millions of people across the country who has invested in a doorbell camera. Stanley bought a system a few years ago after someone vandalized her family’s truck.

“We are really happy with the cameras,” Stanley said. “I just enjoy knowing that I can see what is happening if I need to.”

Stanley was at work one day a couple of years ago when she got a notification from her doorbell camera that there was some movement in front of her home.

She checked the camera and spotted a woman at her front door but thought it was a salesperson or someone else, so she kept working. A few minutes later, she got another alert and saw the same woman and another with bandanas over their face trying to break in to the home.

A coworker called 911 to notify police and officers were able to track down the suspects a couple of days later and arrest them.

“Having the video helped the officers identify and the DA identify the people that were arrested,” Stanley said.

Since then, Stanley’s cameras mostly spot animals wandering through her yard; she hasn’t had another incident since the attempted burglary.

“I did find a FedEx guy throwing a package on my doorstep and I did report him to FedEx for doing that,” she said.

Overall, she’s happy with the security the doorbell cameras provide her family.

The value of proof

In the past, catching a criminal who burglarizes a home or steals a package off of a porch has been difficult for law enforcement agencies.

“It’s a quick crime of opportunity. It can happen in a matter of seconds, and if there’s nobody there to see it happen, then it’s very difficult to identify a suspect,” said Denver Police Department District 3 Commander Rick Kyle.

Traditionally, police officers would canvass neighborhoods to talk to neighbors who might have witnessed something.

Kyle says there has been an increase of porch pirates in Denver over the years with more people shopping online.

Doorbell cameras have started to help police departments across the country gather evidence, identify suspects and build a case against them.

“It’s very, very valuable. Eyewitness identification is helpful, but when you have that combined with the video of the person actually committing the crime, it’s definitive proof of what happened,” Kyle said.

The videos can also help police officers look for patterns in crime and spot repeat offenders, which can allow prosecutors to bring more serious charges against the suspect.

“Recently, we had a suspect that was committing multiple burglaries, not only in neighborhoods in District 3, but also around the metro area, that we received really high-quality video from doorbell cameras that we used to connect the different cases and ID the suspect,” Kyle said.

Neighbors can upload videos from their doorbell cameras or other cameras of crime or suspicious activity in their area of which they want to make the community aware.

Police departments that partner with Ring can also send out notifications or solicit videos of a particular crime they need help with.

“There’s a kind of way to use technology to get the word out even quicker when things are happening to request evidence of crimes,” Kyle said.

Denver police insist that they cannot access the cameras without the owner’s permission or a search warrant, and the video that is submitted through the Neighbors app is done so anonymously.

A Ring spokesperson answered questions via email to Denver7 and said customer trust is important and that the company takes the security of its devices seriously.

“Ring’s mission is to make neighborhoods safer. We work towards this mission in a number of ways, including allowing local law enforcement to share official, important crime and safety updates with their residents through the free Neighbors app. We’ve seen many positive examples of residents and local law enforcement engaging on the Neighbors app and believe open communication is an important step in building safer, stronger communities,” the spokesperson said in a statement.

Regarding privacy, the company said that previous data issues had been fixed and that it encouraged users to update their apps and phone operating systems to the latest versions.

In the end, Kyle believes that cameras are becoming more of a fact of life across the country — from cell phones to traffic cameras — and that the footage they capture offer more benefits than downsides.

A false sense of security

The American Civil Liberties Union has a different take on these cameras. Denise Maes, the public policy director for the Colorado chapter of the ACLU, says they not only have the potential to violate people’s privacy, they can also provide a false sense of security.

“I think a lot of folks think that, ‘Hey, I have this camera here and therefore my house will be crime-free,’ and frankly, that’s not necessarily the case,” Maes said.

One of the biggest concerns the ACLU has with the cameras is it believes there are not enough regulations around the use of this type of technology.

“The law to protect our privacy is far behind the technology that exists to invade it. And that’s the problem with the pervasiveness of these cameras, is where does that information go? What does Ring do with it?” Maes said.

She also doesn’t believe that enough people read through the terms of agreement when they buy and install these cameras and so they may not fully understand what they are signing up for, or how the data collected by these cameras can be used.

Something Maes believes could become a reality in the near future is the companies data-mining the information coming from the cameras to produce things like targeted ads similar to social media companies like Facebook.

So, if a camera spots a homeowner walking out of the house with a dog, for example, it may be able to direct companies to send dog food ads to the house.

She’s also worried about companies providing the video to police without the owner’s knowledge or permission. In the end, Maes says people shouldn’t have to make a decision between privacy and security.

“What police do is give us this false choice: capturing robberies or protecting our privacy. And the fact is both can happen in a world where not all of us are under constant surveillance,” Maes said.

The ACLU is not the only organization calling the nature of these devices and the value they provide into question.

The Fight for the Future Campaign has started a petition to ask local, state and federal officials to stop the partnerships between Ring and police departments.

“We can’t afford to say we’ll figure that out later, we can’t afford Silicon Valley’s ethos of move fast and break things if our democracy and our basic human rights are what they are breaking,” said the group’s deputy director, Evan Greer.

The letter, which was signed by more than 30 groups, claims that there is not enough oversight or accountability to this technology or the partnerships between Ring and police.

“Right now, there are essentially no policies that cover what law enforcement agencies or even corporations like Amazon can do with the data from these cameras once it’s collected,” Greer said.

Even if people decide to voluntarily grant law enforcement access to the footage for one particular crime, Greer says there are no rules about what the agencies can and cannot do with the footage afterward, including storing it indefinitely.

“They can share it with other agencies, like ICE or the FBI,” Greer said. “People might have handed footage over to the police because of a very serious crime, but then the police can use that to crack down on teenagers for smoking weed.”

Beyond that, Greer believes the doorbell cameras and community groups sharing information with one another about suspicious activity is already causing bias.

“We’ve already seen that the Neighbors app, for example, has a real problem with racial profiling – where people are flagging someone as suspicious simply based on the color of their skin or how they look,” she said.

The group is encouraging people to reach out to their elected officials to ask for more guidelines to put in place around this technology and, on a federal level, for an investigation into the partnership between Ring and police.

Greer admits that there are good things that can come from these cameras, like catching criminals, however they could also open the door to bad actors getting a look into our lives if they are able to hack into the camera systems.

She also doesn’t like the idea of people being automatically opted-in to data collection simply for buying the device.

For now, Greer wants people who are considering buying one of these devices to think twice about the tradeoff between privacy and security. Even if an individual or family is okay with the terms and conditions, others might not be.

As the technology evolves, doorbell cameras are becoming a more affordable option for families. The camera quality and storage capabilities are also improving.

Law enforcement officers, tech companies and many homeowners who already own the cameras believe the benefits outweigh the risks and say these cameras make communities safer.

Critics are worried about the short and long-term implications of this technology if more regulations aren’t put in place.

For now, it’s up to individual families to decide whether these cameras are in the best interest their homes.

What do you think about doorbell cameras? Email your thoughts to 360@thedenverchannel.com .